This week’s Hammer of Math takes a look at one of the biggest boosts in the 9th Edition Codex: Death Guard. Fallen Primarch and #1 Papa Nurgle Fan, the Lord of Sticky Hugs himself, Mortarion!

In spite of being the favored son of Nurgle and one of the coolest models in all of 40k, Mortarion suffered a bit in 8th Edition thanks to a profile of Toughness 7, a 3+ armour save, 4++ invulnerable save, 5+++ Feel No Pain, and 18 wounds. With no ability to hide and a meta full of Knight-killing alpha weapons he tended to be targeted and eradicated fairly quickly. Things changed significantly in 9th; you can see his Datasheet for yourself on Warhammer Community and bask in all of the amazing rules that now apply to him. For starters his profile is now T8, 3+/4++ with a bonus of being able to reduce all incoming damage by one thanks to the new Disgustingly Resilient rule, but he also receives a 5+++ thanks to the Revoltingly Resilient trait that he gets. Miasma of Pestilence is also still around to allow him to have a -1 to hit. On top of that he has access to a wide variety of other traits (in addition to the three he has by default) thanks to being able to select one Plague Company trait at the start of the game. Notably for his defensive capabilities, he could use Gloaming Bloat to deny enemy units with Contagion range the opportunity to re-roll hits or misses, or The Droning to halve the Movement characteristics of nearby enemies.

The change from T7 to T8 combined with guaranteed damage reduction make Mortarion significantly harder to kill. This can be seen in the chart below where we compare the output of two very common options known for putting out a lot of damage; Inceptors with plasma exterminators and a Eradicators with a combination of heavy melta rifles and multi-meltas. The solid lines show the number of attempts for the unit to kill Mortariaon using the old codex, while the dashed lines show the new version. In this case Mortarion is assumed to have a -1 to hit aura from Miasma of Pestilence. For the chart below I looked at two curves for the Eradicators; one in which they had a standard profile (4+ to hit, 4+ to wound, no re-rolls) and one in which they received every possible bonus (2+ to hit, 3+ to wound, re-rolls for both hit and wounds). The plasma Inceptors were given the best possible option. The major takeaway here is that it is now extremely difficult to kill Mortarion in a single round with most units designed for alpha strikes. This is most evident in the fully buffed Eradicator squad, which went from reliably one shotting the 8E version of Mortarion 55% of the time to only being successful 15% of the time. And note that this is the best possible combination, with multiple hit bonuses stacked to overcome the penalty from Mortarion as well as full re-rolls to hit and wound from something like Seal of Oath. 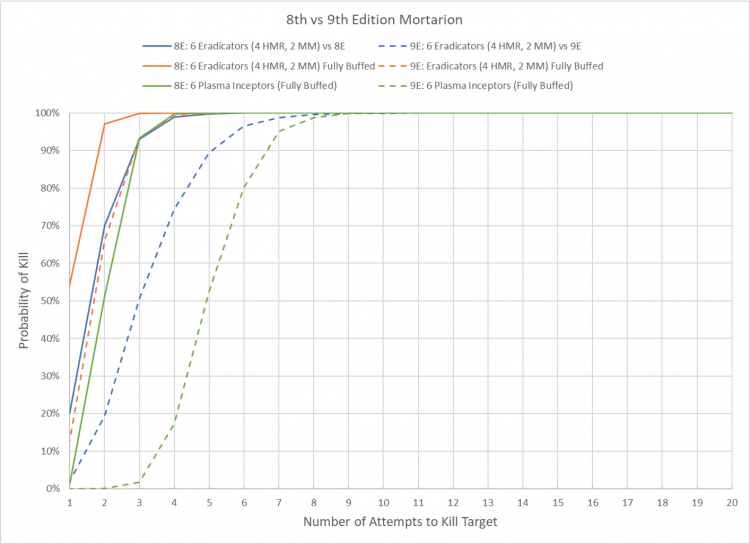 Bring Out the Big Guns

As befitting a 490 point model it only seems appropriate to throw other Lords of War at him. I picked an assortment of Lords of War at various point levels for both melee (where models will not be able to get re-rolls thanks to Gloaming Bloat) as well as at range. The units cover the entire spectrum, ranging from Mortarions own brother Roboute to a Warlord Titan. First up we have the melee choices. 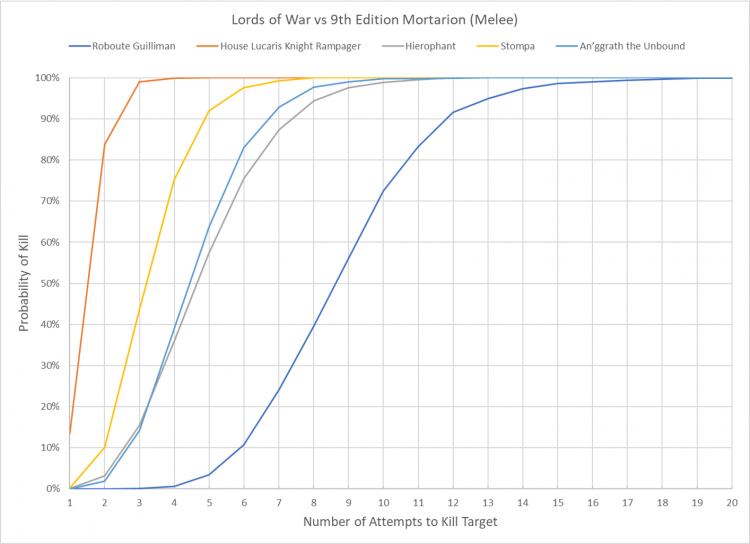 Sadly poor Roboute just isn’t up to the task, barely inconveniencing his brother thanks the loss of his re-rolls and the significant penalties imposed on his attacks. At least the other Lords of War have a chance to kill Mortarion in a couple turns, and the Knight Rampager even has a chance of killing him in one turn (especially if it also follows up with Death Grip).

Next up are the ranged attacks. 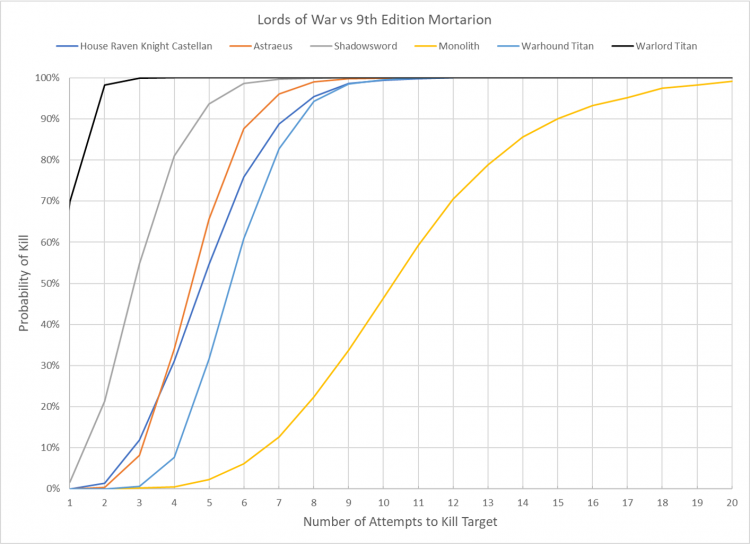 In general the trends follow what we’ve seen with the other units, requiring multiple turns to have a decent chance of killing Mortarion thanks to all of the overlapping bonuses. Over a year ago we explored the insanity that was a fully buffed Iron Hands Leviathan, which used a combination of abilities to dramatically reduce and ignore damage in a way that was obviously outside the scope of what the designers intended. The most jaw-dropping fact was that a Warlord Titan would fail to kill the Leviathan 13% of the time, in spite of using city-leveling weaponry. Since then Games Workshop has released new Datasheets for the Titans and changed a lot, but they’re still absurdly expensive at 5500 points. And it won’t kill Mortarion 30% of the time.

Machomanta on Reddit noted something sufficiently cool that I felt compelled to add an update; I had forgotten about Mortarion’s other brother Magnus. From a lethality standpoint Magnus is terrifying, with 8 S16 attacks on the charge that hit and wound on 2s. As a psyker of unparalleled ability Magnus is able to manifest three powers (plus a fourth if The Great Sorcerer is applied), re-rolling all die rolls of 1 in Psychic Tests and getting an innate +2 bonus if he’s not hurt. When manifesting Smite he drops either 1d6 or 2d6 mortal wounds, and he knows four other powers from three disciplines. He’s pretty good.

For this scenario I had Magnus attempt to manifest Smite (WC 5) with a +2 bonus thanks to Cabalistic Focus to increase the chances of getting a result better than 11 for 2d6 mortal wounds. He also attempted Death Hex (WC 8) to deny Mortarion his invulnerable save, Diabolic Strength (WC 6) for an extra attack, and Bolt of Change (WC 8) for an additional 1d3 mortal wounds. He then follows up with 9 attacks that hit on 2s, wound on 2s, and deal 3 damage. Between his prolific ability to apply Deny the Witch and the very real possibility of a nearby Psyker manifesting Prescience (WC 5) to apply a bonus to hit it seems reasonable that Magnus will be hit on a 2+. 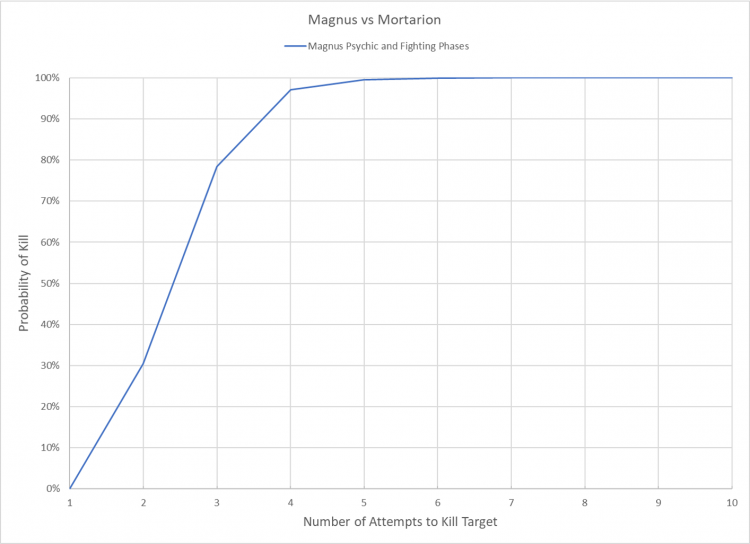 The good news is that Magnus can indeed kill Mortarion in a single turn. The bad news is that it only happened 0.17% of the time. The median number of wounds that Magnus dealt was 7, while the mode (meaning the most common result) was 9 wounds. Although an absolute beast, Magnus needs a lot of rolls to go perfectly in order for the combination to work out while Mortarion can reliably tank nearly everything thanks to his ability to ignore all wounds on a 5+.

Mortarion is sure to become a staple of many Death Guard lists, and Nurgle’s children should be excited at the prospects of having such a resilient paragon of Chaos among their ranks. The combination of invulnerable save, damage reduction, and the ability to ignore wounds is immensely powerful and establishes Mortarion as the massive threat that he deserves to be. Players will not only have to contend with him, but also his many pus-ridden followers, and the challenge of deciding how to best allocate that firepower will be significant.