There’s more to 40k than just grinding out endless RTTs and rolling on endless Maelstrom tables for wacky results. In Hear Me Out, Goonhammer authors explore building offbeat lists and playing with new concepts, and put those concepts to the test in a game environment. This time, Jack “BenBooley” Hunter is continuing to revise his Astraeus focused list.

Welcome back to a Hear Me Out first, where I’m taking what I learned last week and testing out a second version of my list.

TheChirurgeon: And I’m also back, to tell Booley how he’s messing up and I would totally do things way better, if it were me.

If you missed the previous article, I’m a huge fan of tanks, and am building a competitive Imperial Fists list focused around an Astraeus. My list last week was supporting the tank with a squad of terminators, two whirlwinds, and a whole pile of intercessors. I ran it for a test playing Ascension from Chapter Approved 2019, with my opponent Cristian running a mixed army of an Astra Militarum tank company and a strike force of Deathwing Knights. My list came out comfortably on top, but there were a few lessons I took away from the game and am implementing into a revised list.

TheChirurgeon: Yeah I was sad – but not surprised – to see that the Terminators didn’t do much for you. Even with the extra AP boost in Tactical Doctrine, you’re just paying too many points for versatility that doesn’t get used. and 20 S4 AP-1 shots are just stupid easy to come by in a marines list. And agree on the Eliminators. As you’ll recall, my list had two squads and a Phobos character with Target Priority to further boost them.

With this in mind, I started making changes. First thing to go was the terminators, as they were 200 points to accomplish just about nothing. Second was the techmarine, who was limiting my mobility. As great as that Master of Machines aura is, he’s a lot of CP and isn’t super worth it to buff just the Astraeus as soon as I start moving. The third unit I killed were the eliminators, who weren’t accomplishing much alone, and I don’t have any more painted to drop in and give them that effectiveness.

I’ve now freed up a bit over 300 points, and have a few key goals I need to fill:

With these objectives in mind I threw an awful lot of things at Battlescribe waiting for something to stick, and eventually ended up sticking a Redemptor Dreadnought and Tor Garadon into the list. Not only do they fill up those goals I identified, their models are cool as hell.

TheChirurgeon: I love the addition of Tor Garadon. He’s a wonderful way to make up for the loss of the Iron Hands’ Chapter Tactic by letting you circumvent the Astraeus’ degrading BS , just giving it a 2+ every turn regardless of how many wounds it has taken. I’m not as big a fan of the Redemptor, though — I’d have rather seen you add more Eliminators and TFCs, or go the Invictor route. They’re just much more efficient than the Redemptor and their forward utility makes them a more interesting unit. Or alternatively, I think you might have been better off going with the Relic Leviathan here. Either way, I stand by the list I proposed last week.

TheChirurgeon: I like that this has more CP to operate with than your last list, since it isn’t dependent on taking a Chapter Master all the time. The Redemptor will do more for you than the Terminators, and I like the Whirlwinds, though I worry that you might struggle against flyers and also large blobs of marines. I’d really like to see that Primaris Captain swapped out for a Smash Captain, so you have a versatile player who can either hop around and lend his re-roll 1s to hit aura, effectively countercharge incoming units, or hammerpunch planes out of the sky.

I managed to get another test up with this list, this time against Stephen and his Craftworld Eldar. As I’m still prepping the local RTT that’ll be running Chapter Approved 2019 missions we pulled one of them up, this time playing Crusade on Vanguard Strike (one of the pre-set combinations for the tournament). We placed objectives in a fairly even manner, but it was still clear to me that one side was going to end up having slightly better line of sight onto the objectives, so when I won the roll-off to choose Attacker or Defender I decided to take Defender. I was going to gamble on Stephen not being able to take out my Astraeus turn one, and then be able to use my firepower to clear his units off objectives before they can score them. 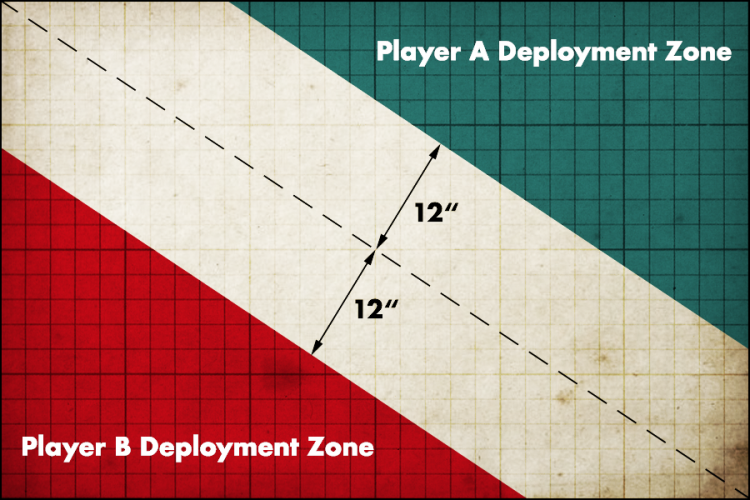 A fairly classic Eldar list like this certainly has the firepower to punish me turn one. I wanted to deploy so that the Dark Reapers wouldn’t be able to see my Astraeus, but nothing I did was going to make that happen – between disembarking from his Wave Serpent and their normal movement they’d be able to see me. I ended up dropping most of my army right on the line, planning to push up as fast as possible and jump on objectives. I was confident I’d be able to hold at least three of them at the beginning of my second turn, and a bit of luck with his positioning and my charging could see me on four.

The most important roll of the game, the seize, went entirely my way. Rolling a six, my fears of losing the Astraeus before getting to shoot were lifted, and I was free to start exploding things. Stephen redeployed some of his units further back, making it harder for me to tag him with all my firepower, but I still had quite a bit available. Between the half of my intercessors who were able to get range on one of the Crimson Hunter Exarchs and the sponson / hull weapons on the Astraeus I was just able to take out the Crimson Hunter Exarch with two powers even through Lightning Fast Reflexes, and the main gun trivially took out a second. I used Tank Hunters and Suppression Fire on one of my Whirlwinds, and between the two of them dropped a Night Spinner. With half his long range firepower down I was pretty confident in my ability to weather the incoming fire.

His fire focused primarily on my Redemptor, pulling it and a squad of Intercessors off the field. As sad as I was to see my most recently painted model shot off the field straight off, it absorbed enough fire that I didn’t lose too many other models, and the Astraeus was still untouched. Fire and Fade let the Dark Reapers pop back into cover after their shooting, so I knew going into the next turn that I was going to have to weather their fire a bit longer.

Since I seized, I hadn’t been able to even try to get a charge off last turn to start hopping on his objectives, so I only ended up taking three points. I kept moving my stuff up into midfield, as it was going to give me the best sight lines on his units. Once again my shooting hammered his vehicles, though Lightning Fast Reflexes and the supersonic airplanes were problematic for a number of my guns. This is about when I realized I could’ve swapped things around to push a Chapter Master up with the Astraeus when needed – in this particular matchup it would have served better than BS 2+. Even with that my shooting knocked down the third Crimson Hunter Exarch, took the second Night Spinner down to three wounds, and took out a Wave Serpent.

I’d knocked Stephen off being able to claim his most centered objective, so he was only going to get two points this turn. Stephen didn’t have enough firepower left to seriously hurt my Astraeus, so focused everything on various intercessors. By the end of this shooting phase I was down a good 20ish of my initial 35 intercessors, putting a bit of a cramp in my ability to spread out, but not enough to be problematic.

I claimed another three points for objectives, and was starting to run low on useful targets. I was able to finish off the Nightspinner with just the lascannons on the Astraeus, leaving the other guns to take out the Wave Serpent and clear off another objective. Both Whirlwinds unloaded into the Dark Reapers, but as they were fairly buffed with psychic powers and Lightning Fast Reflexes (cue me discovering that it works on Infantry and not just vehicles…..) I just thinned them out rather than taking them out entirely.

Stephen picked up one objective here, and all that remained of his shooting was just able to clear out another handful of intercessors.

After this some things happened, but they aren’t interesting to write about in detail. My Astraeus rammed a single Dire Avenger and was able to put 10 attacks into it at strength 10, which was amusing as hell, but didn’t matter to the game outcome.

Final Score: A lot to not so much.

I liked this updated list a lot more. To a great degree the Astraeus is a hard counter to an Aeldari list that relies on hit penalties for durability, but even discounting that I could see that I’ve got a ton more mobility now. As this wasn’t my first run with this list my takeaways are somewhat more subtle, I’m not seeing so much of determining that a unit just doesn’t mesh with the list.

One last interesting thing I found from list building was that I didn’t miss taking more interesting warlord traits and offensive relics at all. In previous lists I’d end up spending a number of CP on picking those up, and simplifying down to just having the bare minimum I need meant I was actually starting the game with 14 CP, enabling me to keep stratagems going for quite a while.

TheChirurgeon: An impressive showing, but I do worry about what this game looks like when you don’t seize. I do like the Wisdom of the Ancients + Astraeus combo to keep things operating at peak efficiency. Still, it’s hard to argue with the results, though I still think swapping out that Primaris Captain for a Smash Captain is the right move.

I’m not planning on making any further tweaks to this list until after my RTT – once I’ve made the first set of changes to take out the things that clearly don’t work I think it makes a lot of sense to replay the same list several times against different opponents so I can make sure issues are actually with the list and not with my execution. Check back next week for my report from the tournament Unfortunately my planned tournament wasn’t doing pre-registration and sold out while I was trying to find parking. I’m still a big fan of this list, so keep an eye out for the next time I’ve got a local event. As always, if you have any questions, comments, feedback, or vitriolic abuse, hit us up in the comments below, on Facebook, or fire it off to contact@goonhammer.com and we’ll respond in kind.