How to Paint Everything: Crab-Stuffed Mushrooms’ Ork Kill Team Terrain

We’ve previously covered how to paint the new Octarius terrain from Kill Team 2021 in our How to Paint Everything article on the topic, but today we’re bringing you an extra dose covering Crab-Stuffed Mushrooms’ wonderful efforts to assemble and paint the full terrain set. In addition to painting the terrain, he’s also talking about basing it and creating bases that still allow you to assemble the “full building” superstructure.

I was pretty excited about the new Kill Team terrain, so much so that I tore through it as soon I got my hands on it! I knew the secret to finishing would be speed: If a project takes too long, I get distracted by life and lose enthusiasm. All in all, this project took 3-4 days:

Basing Kill Team terrain is optional, but doing so can really add to the immersion. GW’s new plastic terrain is pretty sturdy, but adding bases can make the models easier to handle (particularly while painting them)! I was able to base these pretty easily using BuffaloChicken‘s tips from an earlier article on Goonhammer. I attached the terrain to the bases using Gorilla Glue, but this turned out to be overkill – you can see how the glue started to expand because I didn’t read directions on the bottle. In retrospect, mere PVA glue or a glue gun would have sufficed.

NOTE: When basing the corner buildings, I kept the outline of the bases small so that they could still be placed together into a larger building:

I keep a large bucket of sand, gravel, pebbles and other detritus as flock for basing terrain. You can get a combination of materials from local hardware and pet stores. Throw it all in a container and save it for future projects.

I based these with PVA (Elmer’s) glue. Keep the layer thin and gently tap the terrain to remove any excess. I did this over the container lid so I could recycle the excess flock for later. You may need to add a second layer based on coverage. Leave this to dry overnight before priming.

To help anchor the bridges that came with the set, I added magnets to the underside of most of the buildings. Make sure you check the polarity and ensure the same side is facing up! 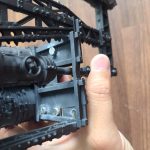 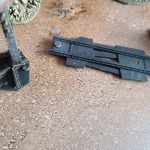 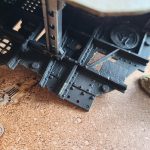 As is tradition, I neglected to take photos during the most crucial part of the process: Painting the terrain! But bear with me, I’ll walk you through it: 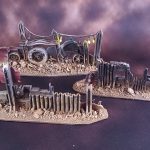 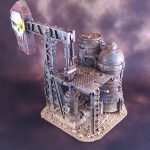 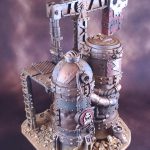 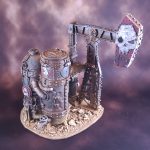 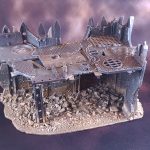 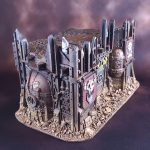 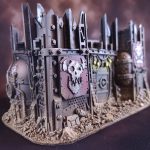 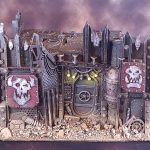 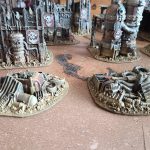 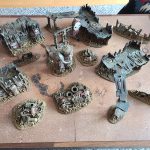 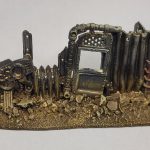 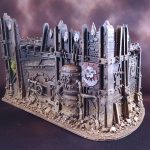 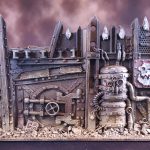 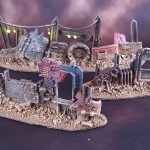 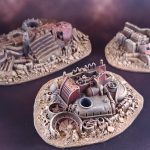 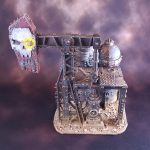