How to Paint Everything: Flesh Tearers

In our How to Paint Everything series, we take a look at different armies of the Warhammer universe, examine their history and heraldry, and look at several different methods for painting them. In this article, we’re taking a look at the Flesh Tearers, one of the darkest of the Blood Angels’ successors – who they are, their history and heraldry, and how to paint them.

The Flesh Tearers are a Blood Angels successor, famous – or infamous – throughout the galaxy for their savagery in battle. All of the Sons of Sanguinius bear the twin curses of the Flaw – the Red Thirst and the Black Rage – but the Flesh Tearers are even more susceptible to these than others. Their Marines fall to the Black Rage at a terrifying rate, swelling their Death Company but weakening the rest of the Chapter. This degradation has worsened over time, and many in the Flesh Tearers have embraced it, furthering the slip into madness.

If you want to read about the Flesh Tearers you are well-served, as they have a surprising amount written about their exploits, being favourites of one Andy Smilie. Sons of Wrath and Flesh of Cretacia are Space Marines Battles novellas which focus on their early days under Chapter Master Amit, the original Flesh Tearer, while Trial by Blood focuses on the other most famous Flesh Tearer – their Chapter Master Gabriel Seth, on trial for the crimes of his Chapter. There are also a number of Tearers-focused short stories available, as well as multiple audio dramas including Blood in the Machine and The Stromark Masscare.

On top of these specifically Flesh Tearers-focused stories, Seth plays a prominent role in The Devastation of Baal (which we reviewed here).

The Flesh Tearers have received the same kind of pseudo-supplement treatment that Crimson Fists got in 8th edition, appearing as an extra feature in Codex Supplement: Blood Angels. We wrote them up for our Start Competing series here, though you will also want to read up on the Blood Angels article here.

Flesh Tearers are a bit easier than your usual chapter with split armor in that their differently-colored elements are shoulder pads, backpacks, and helmets, all elements that are relatively easy to paint separately from the main model. This frees you up to be a lot less careful when applying base coats and highlighting to the red parts of your model.

Hi there readers. The staff at Goonhammer were kind enough to reach out and ask me to put together a guide on how I do my Flesh Tearers. I owe a great debt to their painting guides as I was inspired by their How To Paint Iron Hands article a while ago to make significant changes to my own process, and I’m beyond chuffed that they’ve given me the opportunity to contribute some of my tips in turn.

First, a note on assembly. I like to keep my helmets and backpacks attached with blutac at first so I can get the initial shades done with the whole model then work in subassembly, but you can get away with just keeping the head separate if it proves too fiddly.

I’ve always been a fan of the Flesh Tearers since I first saw them in their Index Astartes article of an old White Dwarf. They have a striking color scheme and a very cool backstory. 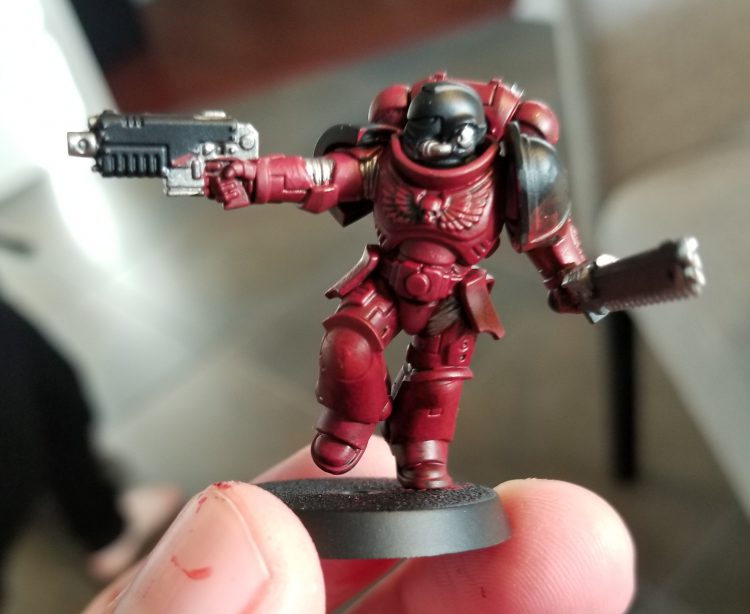 The process started with an undercoat of black primer followed by a couple of thin coats of Khorne Red on the armor and some Leadbelcher on the metal parts. 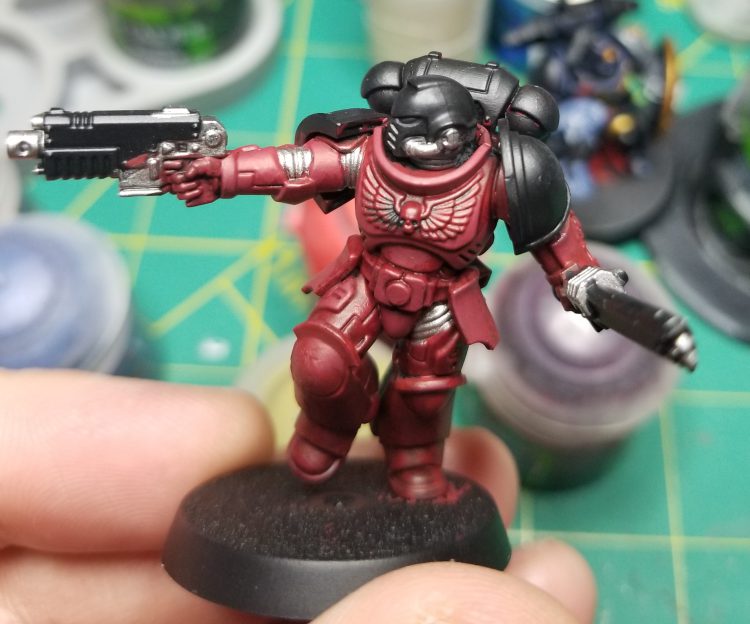 Then I laid down the black on the shoulder pads and helmet with Abaddon Black. Also this is the step where I realized I wanted to make the top of the backpack black. I’ve also started shading the red with some Carroburg Crimson. 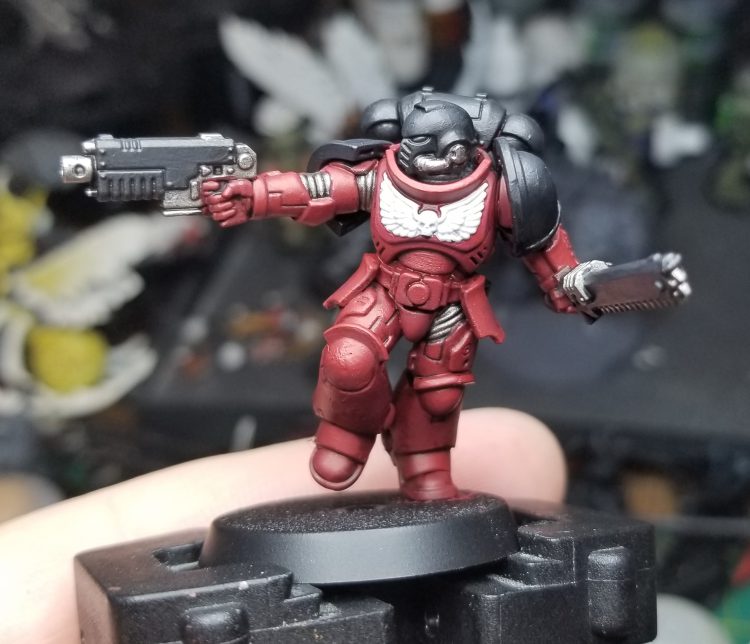 Here’s where the more complex shading starts. I’ve traced the armor grooves with Carroburg Crimson and a bit of Nuln Oil in the darkest recesses, painted the Aquila and the Assault company marking with Grey Seer, washed the metal parts with Nuln Oil, and started shading the black parts. This is done by mixing Abaddon Black and Corvus Black and working up to Corvus Black on the raised parts of the black armor. You can also shade Corvus Black with Nuln Oil for extra depth. 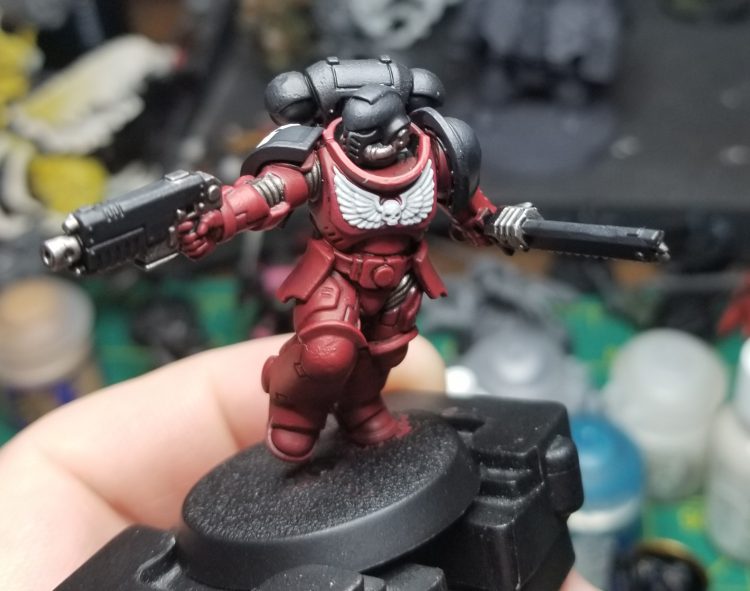 I’m also highlighting the reds at this stage, doing blends of Khorne Red with Mephiston Red. The White parts get washed with Apothecary White, which we’ll then revisit, shading in the spots in-between feathers with Nuln Oil and doing some extra highlights with Reaper Pure White. 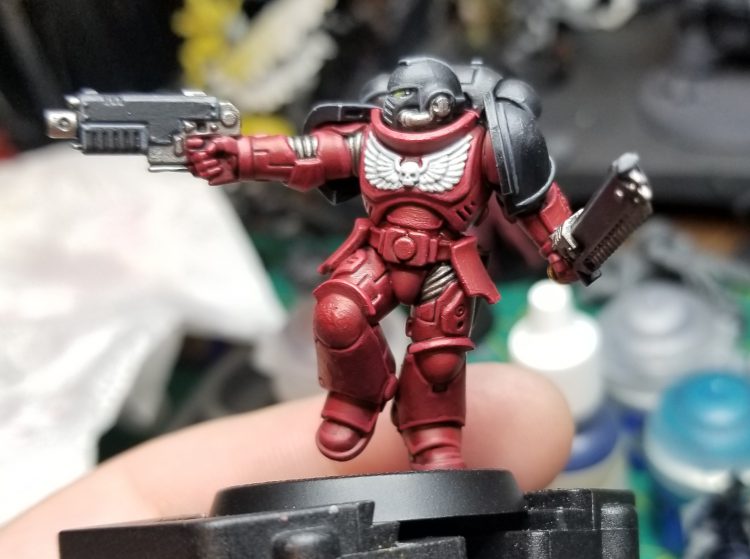 At this stage I’m doing more red highlight as well, doing edge highlights on the red with Wazdakka Red. I also cover the eyes, doing them 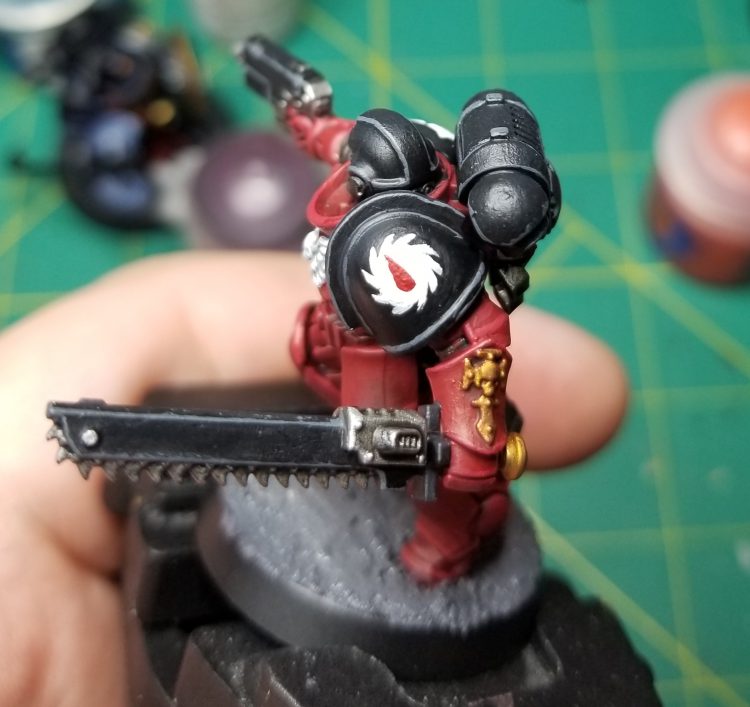 Next up is freehanding the saw blade icon on the left shoulder pad. I start with a circle and then paint the teeth off of that, then come back and add the blood tear with Mephiston Red. 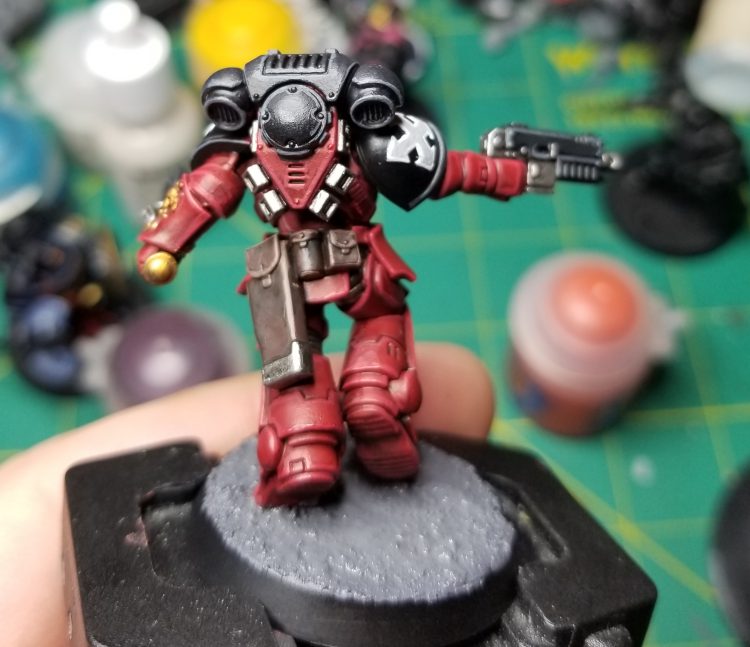 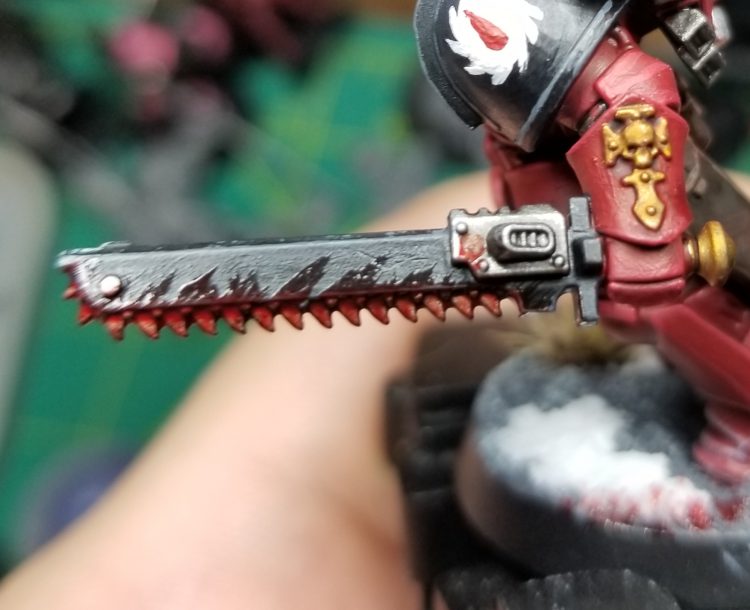 Now for the finishing touches. A Flesh Tearer should be blood-stained so I drop some Blood for the Blood God on his chainsword and some drops on the base to make him suitably stained. The base is Astrogranite drybrushed with Celestra Grey and then some Valhallan Blizzard and tufts of Army Painter static grass on top of that. I’m very happy with how this guy turned out and may paint more of these in the future if I can settle on a faster way to do the shoulder pad icons.

Base Coats: Vallejo German Grey for all the black parts of the armor. Citadel Khorne Red for all the red parts.

Panel lines and deep recesses: Nuln Oil on Black parts. Druchii Violet on red armor. Nuln oil in deepest recesses of red armor.
This picture has some loose highlights of a mid-tone grey on the black armor and Bloody Red on red armor, and a bit of Wylde Rider Red on highest points.

Black Armor: Shaded with Coal Black. Some more highlight built up with a Coal Black and Stonewall Grey mix. Some edges on the rifle are stippled with Leadbelcher and some scratches added to simulate wear.

Red Armor Highlights: The armor is highlighted with a mix of Hyek Yellow and Burnt Orange, at least 2:1. Rather that doing continuous smooth edge highlights I did short lines and dots to give it a rougher appearance. The darker splotches were hit with the highlight color on the bottom edges to give them the appearance of a slightly cratered surface.

Unlike the sparkly, angst ridden Pretty Boy Blood Angels whomst revel in the drama hoping to never experience a moment of true happiness lest they succumb to the desire to write some truly dreadful poetry, the Flesh Tearers are actual proper space vampires who are absolute bloodthirsty monsters and are a danger to both friend and foe alike. Clearly this makes them the best Red Marines to paint, play and collect.

As usual I’ll be showing you a quick simple way to smash through the basic troops so you can spend more time working on the characters and centerpiece models of the army.

Undercoat everything with Grey Seer Spray

Contrast Black Templar will hide all your hobby sins. Shoulders, weapons, backpack and helms are the order of the day here.

After this I go back and touch up the smoosh overflow with some Corax White, slap on some Army Painter Plate Metal on the weapon and lenses and smoosh the face with a random Contrast Fleshtone, in this case Darkoath Flesh. If anyone asks about the eyes, claim it’s a tribute to Simon Evans. Chuck on some Contrast Skeleton Horde on the parchment and oddly enough the hair which works for some reason.

Contrast Wyldwood for the pouches, a dab of Contrast Iyanden Yellow on the Purity Seal, Skulls and weapon housing for a spot of colour.

Dab in some Technical Tesseract Glow on the lenses assuming you can find any available and not snapped up by everyone painting up Necrons.

Editor note: Aren’t you working on a Necron Crusade army?

So I’m kinda done at this point but just in case you run up against That Guy and “YoUr BaSeS aRn’T pAiNtEd” reasoning to try and deny you 10 points, quickly smoosh on some Agrellan Earth and call it Battle Ready done.

With the recent rules update for Warhammer 40,000 Kill Team, these five lads are destined to become the Proper Space Vampire Kill Team lead by Charles Dance. Which means later on I may go back and apply transfers for squad markings, free hand a circle on the shoulder pads and practice adding teeth to get the chapter icon. Smoosh on a wash on the base and make the panel lines a little darker and accidently arrive at “Parade Ready”. That or finish the monorail to collect the Sulfur on the other side of the map because reasons?

I’ve played with some of the same concepts as how I do my Blood Angels and Imperial Fists – building up some shading and highlights in more neutral colors, then tinting the entire model to pull everything together and reach the final color I’m looking for. In this case, I wanted a red a bit darker than I use for my Blood Angels, so during the pre-shade process I refrained from pushing the highlights too bright. I also kept the shoulder pads, helmet, and backpack separate during painting. I’m trying to get nice smooth airbrushed blends, and doing it this way is much easier than trying to mask it.