How to Paint Everything: House Escher – Part 1

In our How to Paint Everything series, we normally take a look at different armies of the Warhammer universe but today we descend into the Underhives of Necromunda and look at how to paint the most dangerous ladies on the planet, House Escher!

House Escher were part of the initial box release of Necromunda: Underhive in 2017 and with the recent release of House of Blades and a new kit to further build out your gang, they are an excellent candidate for our first Necromunda HTPE article! In this first article, we will cover the core gang and showcase a couple different methods for painting an Escher gang that can serve as inspiration for your own creations. In a future article, we will delve into the newest additions such as Wyld Runners and Maidens as well as some of the fearsome Escher Bounty Hunters that you can use to bolster your crew.

Who Are House Escher?

House Escher are one of the oldest houses in Necromunda history, their progenitors rumored to have allied with the original Lord Helmawr himself. In the 41st Milennium, House Escher is one of the six Clan Houses of Necromunda and one of the wealthiest. This is a matriarchal House led entirely by women; centuries of genesmithing resulted in debilitating congenital weakness afflicting all the men of the house almost a thousand years ago, leaving the women to rule and grow the clan. In the years since, the clan has amassed great wealth from the stimm trade and the drugs they sell to the Van Saar and Goliath houses. And of course some illegal genesmithing and off-world animal trade.

As one of the first gangs released with the 2017 re-release of Necromunda and packed into the boxed set, Escher are appropriately all over the Necromunda-sphere – Almost everyone seems to have an Escher gang in their collections. With their fantastic models, stylized weapons, and unique flair, they’ve managed to overcome their somewhat less-impressive rule set (though that has changed with the recent House of Blades release) and have continued to be one of the most popular gangs on the market. They offer hobbyists a variety of different materials and styles to work with when painting.

How to Play Escher

If you’re looking for more information on House Escher and how to play them, head on over to our Necromunday article on how to play Escher gangs.

When painting up a gang, it can be useful to look for a theme for inspiration. This can be reflected in your color scheme, conversions and even naming of your gang (such as SRM’s meat-themed Goliath crew). This doesn’t need to be anything particularly onerous (as evidenced below) but can serve as a unifying foundation for your gang and can help ensure they are wholly your own. The sourcebooks talk about a number of different Escher gangs with different themes or unique stylistic touches that can also serve as inspiration for your gang. And when in doubt, don’t be afraid to riff off the box art!

Regardless of what you choose for your scheme, it’s important to remember that Necromunda gangs are not a military unit! In most cases, you wouldn’t expect the level of uniformity in a gang that you see in a Space Marine or Guard squad. So, while your scheme may contain some core colors for the leggings or halter tops, there are plenty of areas where you can give each ganger a personal touch and bring out their individuality. For Escher, there are three main areas you’ll want to think about:

Lastly, and this is true for all gangs, don’t feel constrained to paint all your weapons the same. Unlike a Space Marine squad with standard-issue bolters, gang weapons might come from different factories, or be scavenged from the battlefield or sport after-market additions. So always keep this in mind as another opportunity to personalize your models.

With that said, let’s look at a couple of examples of awesome gangs!

I wasn’t aiming for a particular theme with these guys. My goal was to emulate the studio scheme using only Contrast Paints, which had just been released! 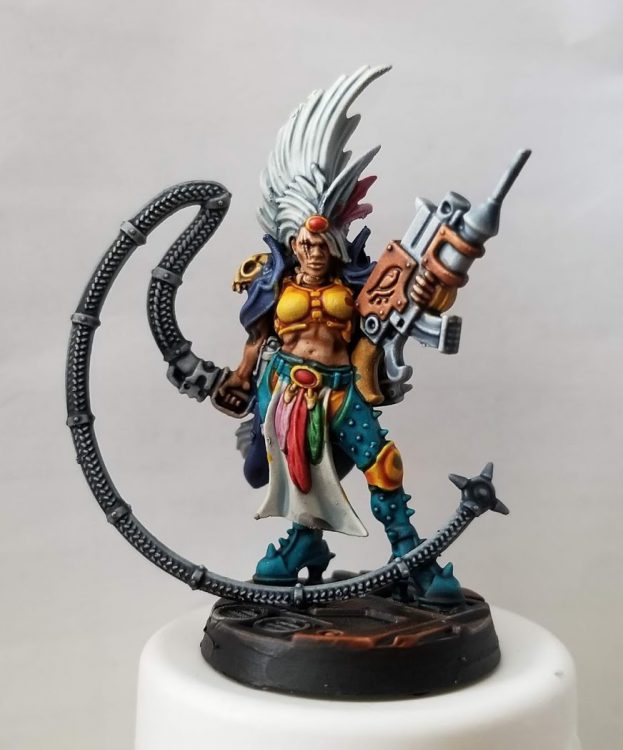 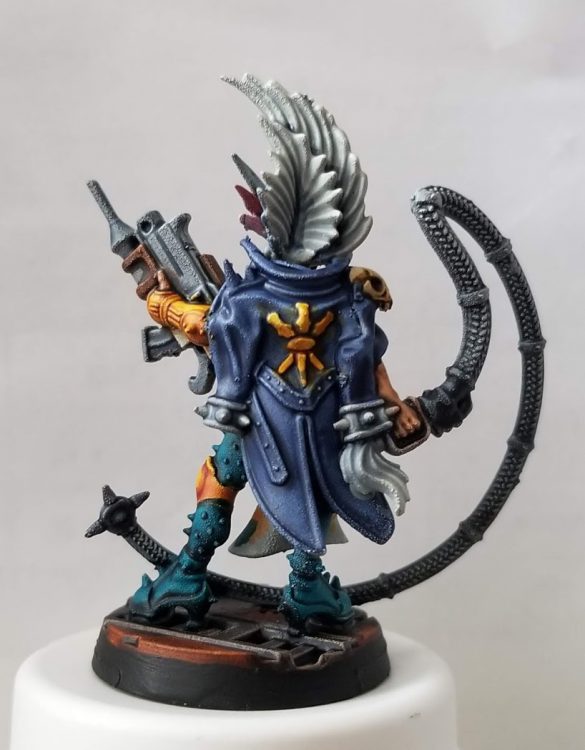 The yellow shirts and blue-highlighted pants really stuck out to me. A suitable challenge for contrast?

Contrast, baby! Some tips on working with Contrast Paints: 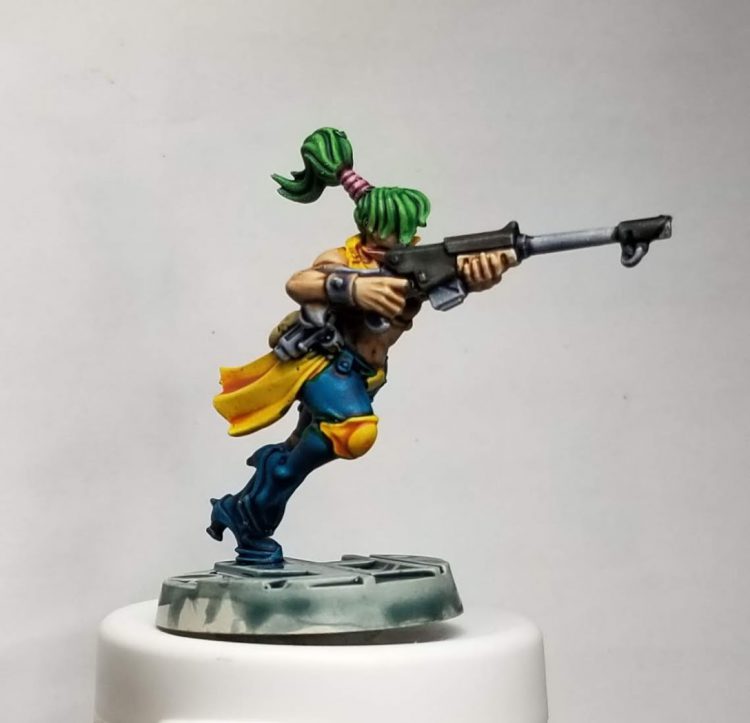 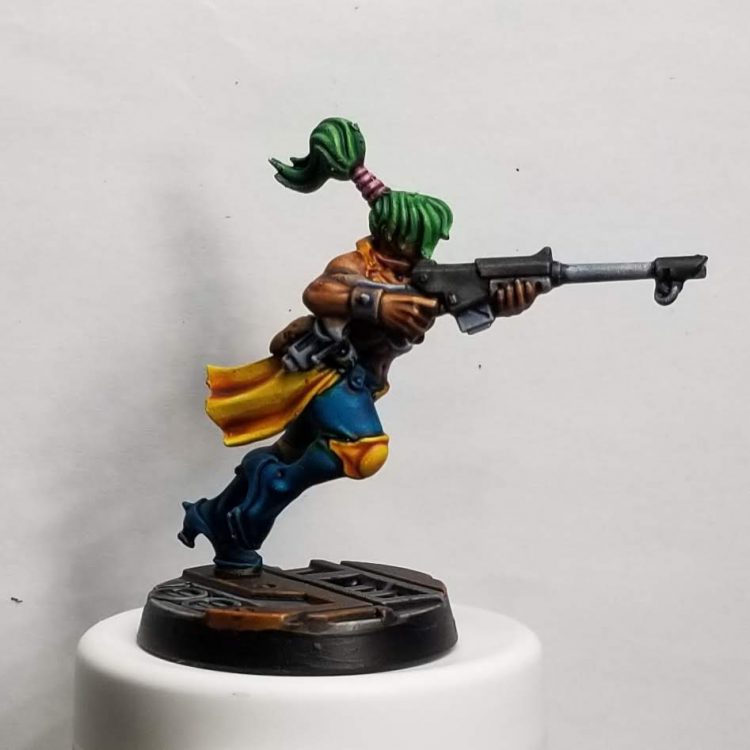 Shade the recesses of your previous coats with darker shades of Contrast! 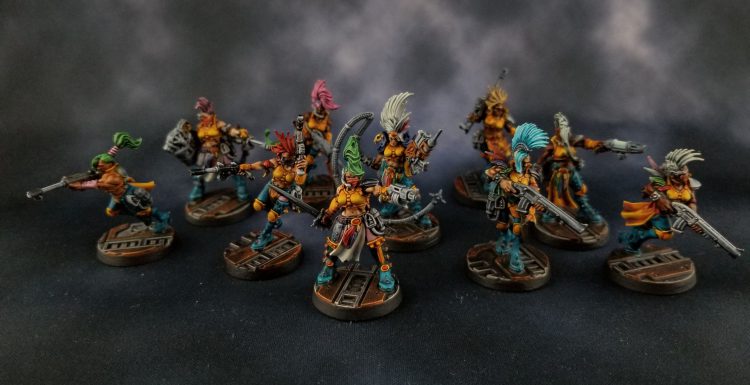 Contrast Paint can be tricky to work with: You need to apply your coats quickly, but it’s also hard to paint neatly. Lighter colors are easier to paint over with darker contrast colors. Using Contrast Medium can help dilute the paints and avoid the ‘blotchy’ effect you see when applying Contrast over a large surface.

With the release of the Space Marine supplements at the end of 2019, both myself and my local group was burning out on 40K and was looking for something new to play. After being unable to convince everyone to play the best game that Games Workshop make (Adeptus Titanicus), we agreed on Necromunda.

It had been a long time since I had played Necromunda and I was looking forward to exploring the underhive. Picking what gang to play was easy: Fifteen odd years earlier I always liked the idea of having an Escher gang, but the models were long out of print and hard to come by in NZ.

My selection of paint scheme was entirely based on what colours I hadn’t painted recently. I was sick of painting the red, orange and purple of Blood Ravens, Genestealer Cult and Xestobiax Titans respectively. I browsed through Instagram looking for inspiration and eventually settled on a Turquoise and Yellow scheme, largely inspired by Crab Stuffed Mushrooms leader.

When it came time to paint the individual gangers, it had been quite some time since I had painted some normal human characters, so I wanted to experiment with a mix of vibrant hair colours and varying skin tones.

By the time my local group hand their gangs ready the pandemic had kicked off, so they are yet to see the table – although this has worked out in one regard as now the House of Blades supplement is out to give me some new options. I think my biggest challenge is going to find a Death Maiden scheme I’m happy with as I don’t want them to stand out to the point of looking out of place.

This start to a gang is almost purely the fault(?) of the covid outbreak as I thought I might end up playing necromunda against my brother, this never quite happened but I have the models anyway. When I did my orlocks the scheme was high effort and very time consuming and was kinda burning me out so I wanted to do something faster with the escher. To this end the majority of this scheme is contrast paints and washes, other than the skin, hair and metal the initial colours are all contrast paints over grey primer.

I rarely go into painting a new colour scheme with it all thought out, most of the time I start with an initial colour or technique I want to use and work out from there. I started the scheme by laying down the orange and then asking myself what colour suits the feel of the model. I like the mix of tech in the models and I wanted to retain that, so to offset the modern and utilitarian orange I went for a leathery brown for the straps and boots. I liked how the weapons and under armor looked in grey as it pulled a bit more of the industrial feel in so I just used grey and black contrast to give some more texture then the primer had without dramatically changing the colour. For the cloth I was just kinda going for dirty work clothes kinda feel, for this skeleton horde over the primer worked surprisingly well but it was pretty ugly before the highlights.

The bit that I had the most trouble deciding what colours to use in the hair and feathers, I wanted them distinct from the rest of the relatively restrained scheme but I also did not want shocking colour contrast as I am never really about that sort of thing. What I ultimately went for was the look of a seagull feather as it has a strong luminosity difference without departing from colours already in the scheme.

IF any part of my scheme is of interest, I have the specific paints used in a dump from paintRack on pastebin!

I still have another five eschers on sprue, but I might get some FW weapons to get some more interesting guns because I am not really feeling additional duplicate load outs. I honestly am a collector more than a player so I doubt I will have a super effective gang, but it will look cool!

That wraps up  the first part of our look at painting House Escher. Hopefully you have everything you need to start painting up your gangers and preparing them for underhive domination. But as always if you have any questions or feedback, drop us a note in the comments below or email us at contact@goonhammer.com. And tune in next time as we look at expanding our gang with Death Maidens and Bounty Hunters!