Ah the Daemon Prince. Is there any model more integral to the Chaos Space Marine experience with such a lackluster model? (OK, I see your point about possessed. We’re gonna come back to those in a future article though). The current plastic daemon prince isn’t awful – there’s a clear attempt to capture some of the visual flair of the 3rd edition metal daemon prince everyone loved – and the need to be a dual fantasy/40k kit certainly hurts it a bit, but it’s also not great. The head options are mediocre and the weapons/arms leave a bit to be desired. Plus, if you want yours to look like anything other than a generic daemon – particularly a Nurgle option – you’ve got to do some custom work.

That said, I think there are some easy conversions that can be done with the model to fix its issues and set it apart, and needing a Death Guard Daemon Prince for my army, that’s just what I set out to do. There were a few things I knew I wanted out of this conversion, and the primary ones were giving the Daemon Prince a pot belly and replacing his wings with the fly wings from a plague drone. I’d also want to do something about the head, but I wasn’t sure what yet. After some bitz and sprue searching, I found that drone wings are pretty common in online bitz sellers’ shops, but pot bellies filled with teeth, not so much. So I did some additional digging and found out there’s a single Age of Sigmar mounted character that fit all my needs – the Lord of Afflictions.

So I grabbed one of each of these yabbos and started on my conversion odyssey. The first step was to identify the correct belly. I knew almost immediately that this the bit I wanted to use: 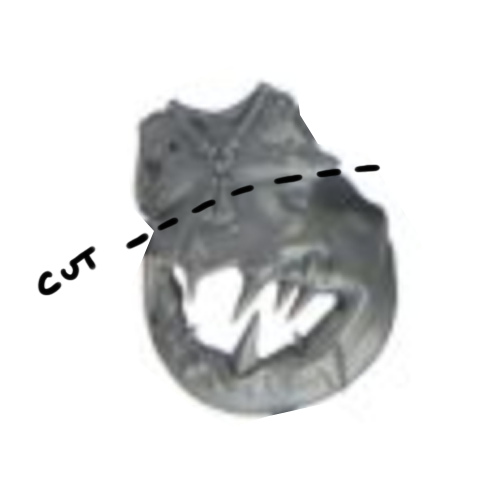 I just had to cut off the upper portion and then greenstuff it onto the gut of my model. Cut this way, it was almost a perfect fit for the Daemon Prince’s abdomen, which worked out great. I put greenstuff into the area the gut was going first to give me some inner entrails to paint, and then dis some smoothing work around it. Disclaimer: I’m a decent painter but I am awful at working with green stuff and it didn’t help that I don’t have my tools right now. The good news is that it can be rough and bumpy because well, this is a Nurgle model. 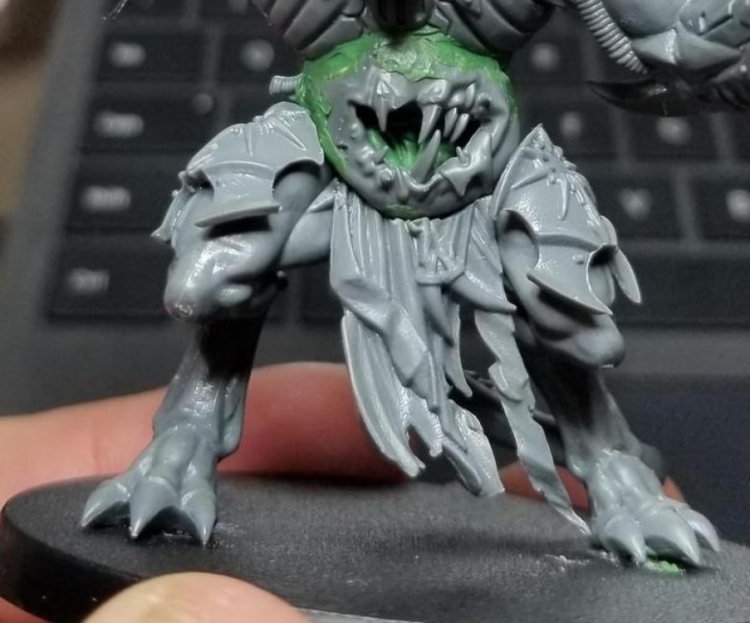 The model looked weird with nothing under his gut so I cut off the top of one of the tabards and glued that underneath to complete the look, which worked out well.

On the whole, the wings were pretty easy – these are literally globs of green stuff on the back of the model that I then jammed the wings into to create the appropriate divots to glue later. I’ve done the wings in an up position, and I think it looks OK, but if I had to do this again, I think I’d consider having them down in a more relaxed position to reduce the profile of the model and make him easier to transport and store. 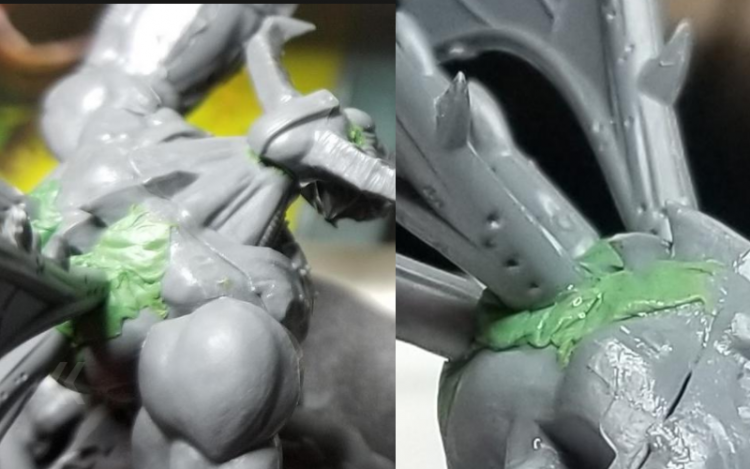 Next up was the sword – I wanted to go sword and claw to give myself some leeway to use the new Epidemicyst Blade relic from War of the Spider, plus it keeps his base cost lower than if I go double talons. I didn’t want to do a ton of work here, so I decided to copy an aesthetic I’ve seen on some of the Blightkings in Age of Sigmar and give him a straight blade with a flat end. This was a pretty easy clipping and shaving job, and I finished off by drilling three holes in the end to mark the blade as a Nurgle weapon.

Next up was the head. I liked the idea of using a drone head on my DP to complete the fly look but it needed a better fit on the model and needed to look a bit beefier. I was able to achieve the result I was looking for by cutting the top off one of the standard daemon prince heads and fitting it onto the plague drone head for the blightlord, giving the daemon prince a more imposing look than if he just had a fly head. 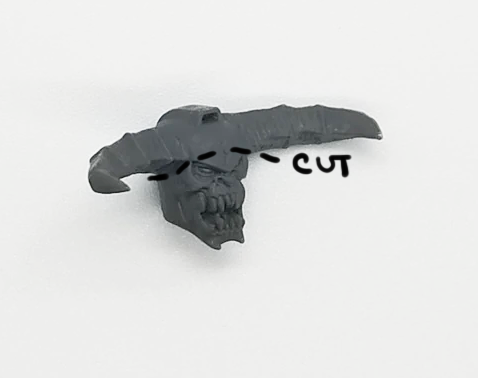 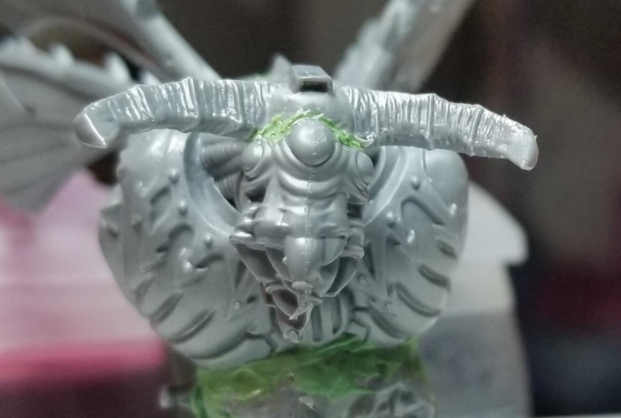 Some final trimming and this bad boy is ready to prime and paint! 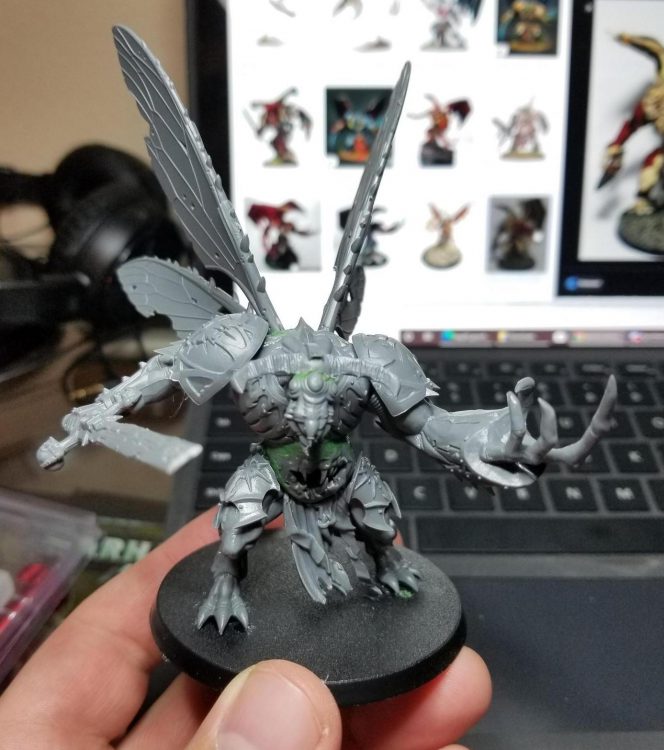 Painting-wise, this guy got painted the same way as my Death Guard – Castellan Green shaded up with Deathworld Forest and Death Guard Green, edge highlights with Ogryn Camo. Everything washed in Agrax and Nuln Oil in splotches. The armor trim is Balthasar Gold with Agrax and Nihilak Oxide, then edge highlit in spots with Retributor Armour to give the impression of former splendour. Bone parts are Rakarth Flesh with Agrax and Reaper Polished Bone to highlight, and the metal bits are Leadbelcher washed with Nuln Oil, then covered in Typhus Corrosion and drybrushed with Ryza Rust. Then I coat half the model in Nurgle’s Rot cause that slime is awesome.

Overall I’m very happy with how he turned out. He’s a visual improvement over the standard Daemon Prince, and looks appropriately Nurgley without spending a ton of effort or attempting to do extra green stuff work that I wouldn’t have been confident doing. He gets the visual point across and is striking enough to get someone to look closer at the model but also didn’t take forever and is clearly still in the same visual/physical foot print as the plastic winged daemon prince.