How to Paint Everything: Karazai the Scarred 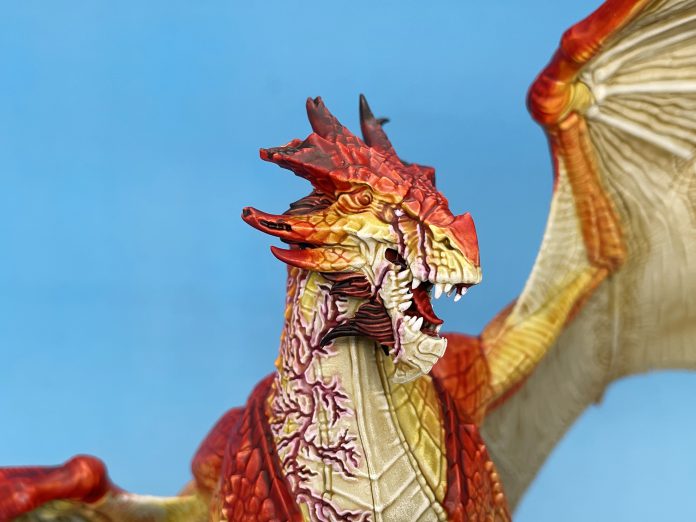 Games Workshop hit us up and offered us a review copy of the new Draconith to demonstrate painting on. I mean, how could I say no?

With the kit in hand, I got my building supplies together and dove in.

I chose to assemble Karazai as I just don’t like that smug blue one… The kit is a dream to put together, the way the designer split it up hides pretty much any join lines and there were very few mold lines. I took my time, dry fit everything and found nothing to be confusing.

I got the base together and figured out where I wanted it to sit on the BIG (160mm) base and once down, added some slate and some oxide paste to hide a few joints and some spots of weak detail. I made sure to use little pieces of masking tape on the base and feet where they would connect so that the glue would actually work to hold him together.

The day I had to assemble and prime the large lad was hovering around freezing, so I warmed up my cans with some hot water and quickly got outside to get him primed then ran him back inside to dry.

Once Primed and dry I started in on painting. I had an idea for my scheme, something that could be accomplished quickly and still get good results. I decided on using mostly Contrast and limiting myself to just 4 colors; Skeleton Horde, Iyanden Yellow, Blood Angels Red and Cygor Brown.

Step 1 was to dry brush the entire model with white over the bone spray.

Step 2 was an all over glaze of 40/60 Skeleton Horde and Contrast Medium.

Step 3 was a glaze of 30/15/55 Skeleton Horde, Iyanden Yellow and Contrast Medium targeted to all scales, wing ribs and some of the membrane of the outside of the wings.

Step 4 was a glaze of 20/40/40 Skeleton Horde, Iyanden Yellow and Contrast Medium targeted to all scales and wing ribs of the outside of the wings, leaving a bit of the previous layer showing.

Starting with this layer I began careful blending the edges so the transition between colors was smooth. To do this I would apply my glaze to a small area, and then rinse my brush and go back and wet blend the edge into the previous layer. I did this with each layer after this, working with smaller and smaller areas as I targeted the color.

Step 5 was a glaze of 15/45/40 Blood Angels Red, Iyanden Yellow and Contrast Medium on the scales and wing ribs of the outside of the wings, leaving a bit of the previous layer showing and wet blending to smooth them out.

Step 6 was a glaze of 60/40 Blood Angels Red and Contrast Medium on the scales and wing ribs of the outside of the wings, leaving a bit of the previous layer showing and wet blending to smooth them out.

Step 7 was a glaze of 50/10/40 Blood Angels Red, Cygor Brown and Contrast Medium on the scales and wing ribs of the outside of the wings, leaving a bit of the previous layer showing and wet blending to smooth them out. I used this same glaze on the inside of his mouth, being careful not to get it on the teeth or the front of tongue.

I painted the fur on his head, belly and legs with this same glaze with a layer of Cygor Brown on the ends blended in.

I then painted the eyes, teeth with white, the front of the tongue with Blood Angels Red and highlighted the scarring on the side of his neck.

After dotting the left eye with a spot of Corvus Black I glazed the scarring with a 50/50 mix of Volupus Pink and Contrast Medium, going back after it dried with a 80/20 mix of the same to strengthen the scars themselves. it was also at this stage a did little line highlights to his chest and took the opportunity to fix a tide-pool of Contrast the I’d allowed to happen.

The last thing I did was to glaze the inside of the wings on either side of the ribs with a 50/50 mix of Skeleton Horde and Contrast Medium, blending it out to the centers.

As far as the base goes, I base the stone with The Fang, and the dirt with Mournfang Brown.

I did some highlights on the stone with old school Space Wolves Grey. I put a Black wash over all of it and dry brushed it with Bone. I painted the weeds with the old Foundation Paint Knarloc Green and glazed them with Creed Camo. I painted the rest of the base with Goblin Green.

And that’s basically it. I finished the base with a healthy dose of OnOne of mixed flock. And once that was dry, glued him onto the base.

Have any questions or comments? Comment below or email us at contact@goonhammer.com.