BLUNDERDOME, ROUND 1: THE RESULTS

Welcome back, dear reader, to the third installment of our BLUNDERDOME series. In case you missed what all this is about, you can find the rundown in our first article.

On Monday we revealed the results of our random army draw and the seedings. Once we’d had those match-ups set, it was time to actually play the games. In today’s article we’re going to talk about those sad, sad battles and their inexorable outcomes.

There’s a lot to cover today so let’s just get on with it.

THE MISSION: SWEEP AND CLEAR 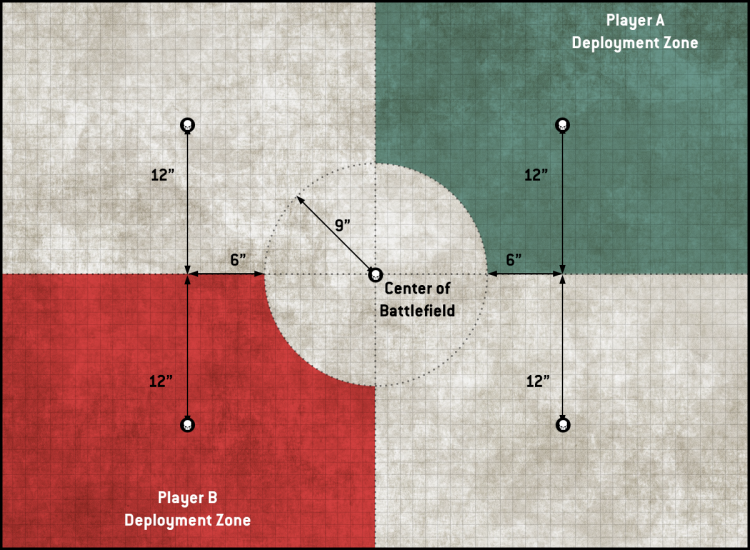 We picked a trio of otherwise versatile maps for these three rounds, starting with Sweep and Clear in round 1. This mission helps some of our armies by “having a decent mission secondary that some of them can score,” so it should be a good day for our top lists, e.g. the ones that can actually hold objectives.

The best part of this game was watching Liam continually curse Rob for saddling him with a massive number of Cultists. Ultimately, despite the fact that the cultists worked all game and were only able to kill a SINGLE MODEL – the Catacomb Command Barge, and even that took some poor luck on Innes’ part – there wasn’t much the Necrons could do to stop the Cultists from winning.

Liam: For the Blunderdome I inherited Rob’s Chaos list, which after our seeding vote was firmly in the middle of the pack – not considered likely to win, but with too many useful tools to be the utter worst. I’d say that’s fair enough, since it has lots of Objective Secured in the form of the Cultist blobs, as well as having guns (not guaranteed in this format!) The biggest problem with it is that it’s completely, absolutely, utterly awful to play. Nothing in the army does anything worthwhile, and Rob – knowing he wouldn’t be the one to have to play it – gave all the Cultist units mixed weapons, so every shooting or fighting activation is an irritation as you check and re-check how many guys have pistols or rifles and which ones are in range or not. Once you’ve figured it out, you remember you’re only firing autoguns anyway, so you roll a bunch of dice and achieve nothing. Great stuff.

I also know nothing about the CSM codex – I have no idea what any Stratagems or Relics or Warlord traits do – and I don’t intend to learn (Rob: You can’t use most of them anyways). Thanks to the aforementioned seeding, the 4th-ranked Chaos were playing the 5th-ranked Necrons. Yes, the Necrons with the Pylons, which can’t move, and no Obsec at all. This created the world’s least interesting tension, where I was guaranteed to win while achieving nothing, and Innes would lose while doing lots of killing. My goals were pretty simple – shovel Cultist trash onto objectives and watch it die, and hope to maybe do a wound to a model at some point purely for my own satisfaction.

Liam: With those considerations in mind this was less a “game” and more “a game-like experience.” Warhammer 40,000 9th edition was technically played. Innes cheated with his pylons for half the game until he noticed that you’re meant to choose ONE shooting profile for their main gun, and not just fire both. It didn’t matter because I could have shot at the Pylons until 2023 and not killed one, and he needed a game that was about 10 turns long merely to have enough shooting activations to kill the trash on my side of the table. On the plus side, I did manage to kill a Catacomb Command Barge, thanks to his complete inability to roll saves for it. Watching that skeleton idiot die was the highlight of the game, indeed the only positive part of the experience except spending a couple of hours hanging out with Innes in a format where I was unable to lose to him.

Rob: My favorite part is that midway through the game Innes learned that Pylons can’t shoot both of their profiles at the same time, and so he’d been blatantly cheating by killing both Rhinos and cultists every turn.

Liam: I hate this ride and I want to get off. Instead I’m gonna have to mash these idiot Cultists into a pile of Bloodcrushers next game, which I’m sure will go fantastically well for them and won’t result in lots more skulls for Khorne and a lot fewer Cultists for everyone else.

Rob: Let me tell you: A lot of people looked at this game and assumed Greg would lose, in part because of the sheer volume of tanks in Chase’s army. And a lot of people then found out just how bad Leman Russ Vanquishers are. Chase spent 5 rounds bouncing off Greg’s Darkshrouds nearly completely, doing everything he could to wipe a number of loosely protected characters off the board, only to find out that a double shot BS4+ lascannon against an invulnerable save will just Not Get You There.

Greg: I also started this one 400 points down, because there was no way to deploy the Fortress of Redemption. I had a dreadnought with no guns, 40+ points of Assassinate targets, and some mobile bubbles of -1 to be shot, against 11 tanks and some random T3 characters.

This ended up being a pretty solid example of why first turn matters. My main concern wasn’t Chase’s shooting – the fact that he gave me enough Darkshrouds to force his entire army to hit on 5s with their single-shot guns took care of that – but that he’d just run tanks around the table and box me into a corner. That didn’t end up happening, but given the closeness of the score it could have easily gone the other way. With no ObSec models, Stubborn Defiance was off the table, so I took Oaths of Moment, which is a no-brainer when there’s a center objective and your army literally cannot fail morale, The Teleport Homers Thing, which was a massively stupid idea, since I didn’t do a lot of Activities but he kept feeding my captains Commissars and I would easily have maxed Assassinate, and Engage, which actually did kind of work – between the Darkshrounds zipping around and deep striking my two Deathwing characters, I did “ok” with it.  Chase took Banners (bad), Assassinate (good), and I forgot his third one.

Chase ended up deploying his Tanks in a solid wall around his deployment zone, and sending a couple of them over to the top-left and bottom-right objectives, to feebly bounce their close-combat attacks off of the Darkshrouds. For my part, I sent the Ancients and gun-less Devastators off to hold some ground, and gradually fed my combat characters into the center where he managed to not kill them quickly enough to stem the tide of Oaths points. I was worried I’d run out of guys before the game ended, and I almost did, but those Darkshrouds did Work and the Ravenwing Champion managed to punch a Deathstrike so hard it exploded, which saved me. Chase, to be clear, also rolled some of the worst dice I’ve ever seen, including a Deathstrike shot that killed zero of my models and put a bunch of mortals on his own tank.

Three points for winning, three more because my T’au list lost, and a bonus point for having our patrons vote my list as the worst of the lot, leaving me in sole possession of first place. These are my crimes. My sentence: I have to play the goddamned Drukhari in round 2.

In the bizarro world that is Blunderdome Greg wins a game, 77-73. Meanwhile Chase loses to his own list, scoring 0 points for the round. 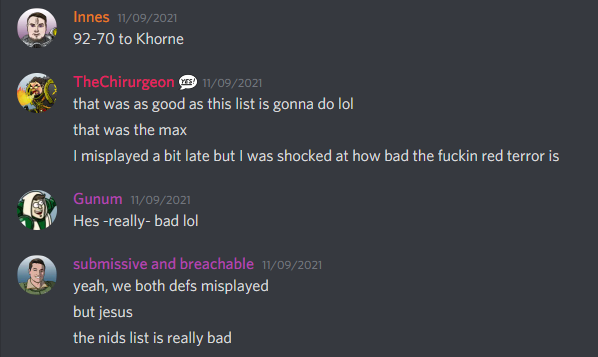 When we actually drew the matchups, it was clear that some were as close to “dream” matchups as one could expect from these lists. And for Tyranids, this was it – an entire army that had no way to shoot spore mines off the board and lots of 11+ model units for the Blast guns on the Tyrannocytes to act at full potency. 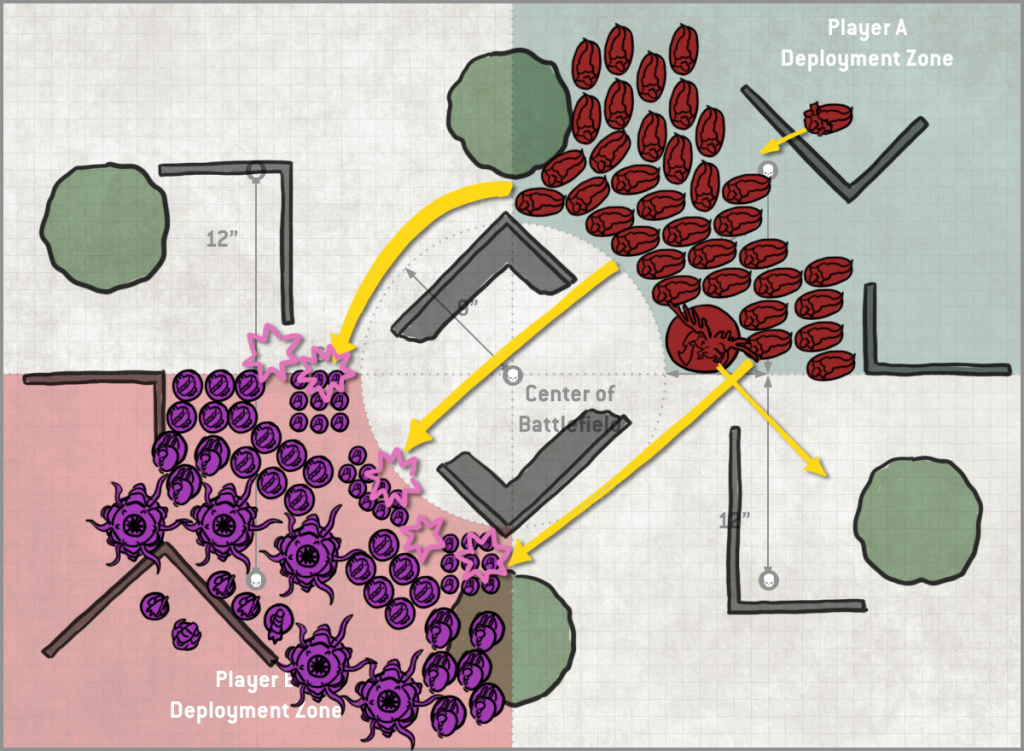 Scott won the roll-off and his Turn 1 basically started with him crashing the entirety of his Khorne daemons into the spore mines in a glorious example of fucking around and finding out.

The net result is that Scott takes a staggering 36 mortal wounds from exploding spores on turn 1, wiping out one unit of Flesh Hounds and nearly killing another. Meanwhile, Deathleaper pops up behind him and kills Karanak on turn 2. But that was pretty much all the gas this list had – once the Bloodcrushers started showing up, there wasn’t much left. Sure, additional spore mine explosions killed many of them, but once the mine were gone, the Tyrannocytes didn’t have much they could do and the Red Terror proved massively ineffectual when it came to actually killing things, along with the Tyranid Primes. Turns out they’re all very, very bad at combat.

By game’s end the Tyranids had scored 15 points on No Prisoners, 6 on Psychic Interrogation, and 4 for Assassination (having no other scorable options), thanks to the Deathleaper’s heroic efforts killing Karanak. Meanwhile the Daemons managed to score Direct Assault on every turn thanks to one Flesh Hound clinging to life after the rest of his unit exploded T1, plus 10 on To the Last and 12 for Stranglehold. The Daemons hold on to win it, 82-60. Skarbrand never even made it into combat.

For this matchup, I’ll be turning the mic over to James “One_Wing” Grover. As the only other player here who’s a big enough rube to take copious notes and do their own write-up, he graciously provided all the documentation I’d need.

Wings: Thanks, I guess.

Drukhari get the first actual 100-point win in the event, scoring 90 and then getting the bonus 10 for paint score.

Next Time: Round 2 Match-ups

That wraps up our round 1 Blunderdome results. On Monday we’ll come back and take a look at our Round 2 Match-ups and preview the games to come. In the meantime, if you have any questions or feedback, drop us a note in the comments below or email us at contact@goonhammer.com.