How to Paint Everything: Seraphon

In our How to Paint Everything series, we take a look at different armies of the Warhammer universe, examine their history and heraldry, and look at several different methods for painting them. In this week’s article, we’re looking at the Seraphon, who just received a new battletome.

Who Are The Seraphon?

Do you like basking in the sun on warm rocks? Do you slow down in cold weather? Do you enjoy traveling the stars aboard ethereal starships and worshipping the corpses of powerful magic toads? Then chances are, you’re a good fit for the Seraphon, a race of spacefaring lizardpeople with Mesoamerican visual cues.

As the Old World came to an end, the Seraphon escaped on glittering vessels, drifting in the void for countless eons before making their way to the mortal realms. Over time they have become creates of celestial magic more than flesh and blood, spurred on to fight in the unending war against Chaos, fighting under their Slann lords.

Now the Seraphon’s fight against Chaos continues in the Mortal Realms. With the blaring of horns, the Seraphon will coalesce from beams of light, or fall to the ground on falling stars. It’ll be a dramatic entrance that varies based on how they are summoned by the Slann calling them. Recently, the Seraphon have come to the aid of the Stormcast Eternals against the Bloodbound and the two factions fought as allies.

The Seraphon, more commonly known as “Lizardmen” to players of Warhammer Fantasy Battles, are a varied race of well, lizardmen that encompass different types of dinosaurs, lizards, pterosaurs, amphibians, and reptiles, and tend to adopt a visual style with Mesoamerican references (particularly the Mayans), typically incorporating sigils and adornments of golden to match bone armor and stone monuments. When it comes to painting them, they offer players a lot of different textures and styles to play with, with models that will have a mix of scaly skin, thick bone and shell plating, slick, slimy frog-like skin, and shiny metals.

The Seraphon are criminally underserved from a lore and novels standpoint. I haven’t read these, but if you’re interested in reading more about the Seraphon in the Age of Sigmar, you don’t have a ton of options. The new Battletome is your best bet, but after that, consider these:

When it comes to painting Seraphon and building your own schemes, nature has already given you a wealth of inspiration to draw from for every type of model.

You can draw primarily from Alligators and Crocodiles if you want, but you’ll find that a lot of those tend to be fairly drab compared to what Age of Sigmar armies tend to demand from a visual standpoint. Instead, I’d recommend looking at other reptiles and small lizards such as snakes and chameleons. Generally speaking, reptiles tend to be drab in color to blend in with their surroundings, either to protect them from predators or hide them from prey until it’s too late. There are however many brightly-colored reptiles out there; many of these are poisonous, and the color helps communicate that to potential predators.

Snakes come in every color and can live on land or in sea. Because of their scaled skin, they make very good reference material. 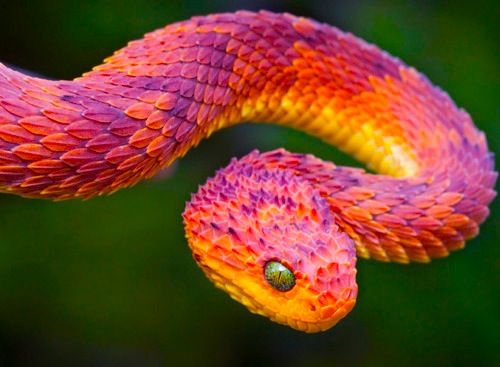 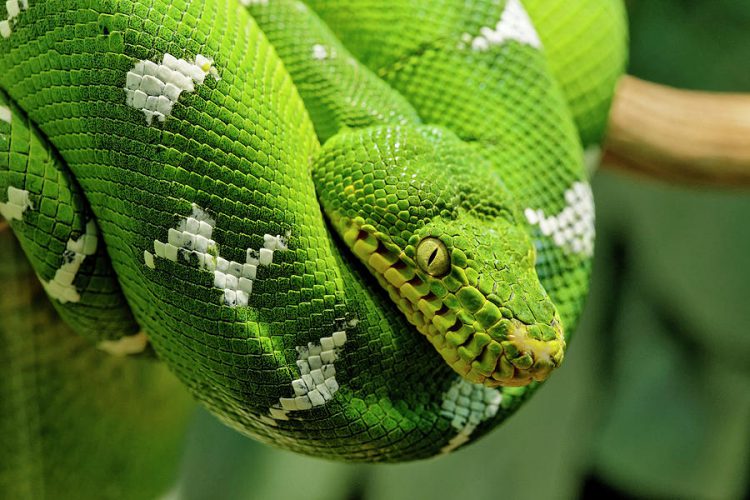 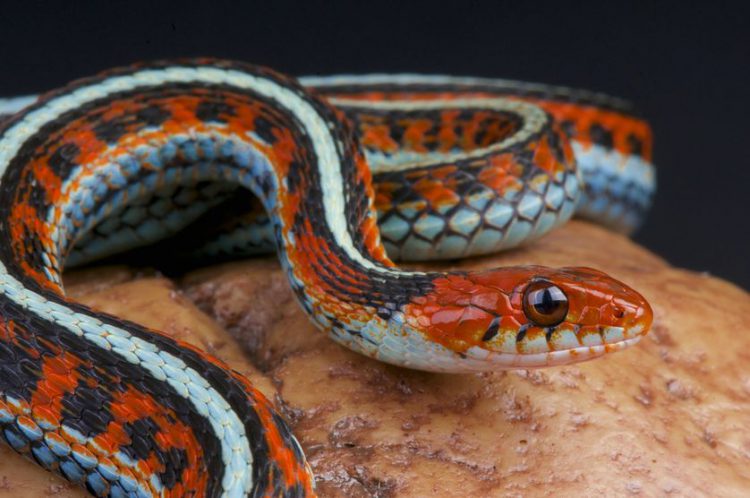 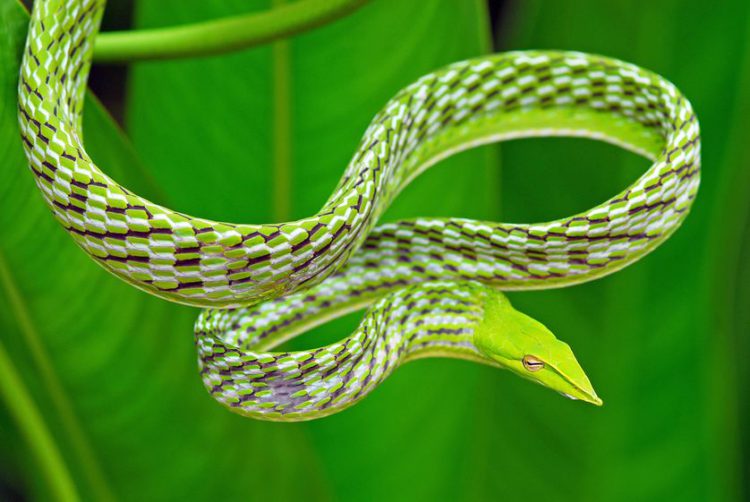 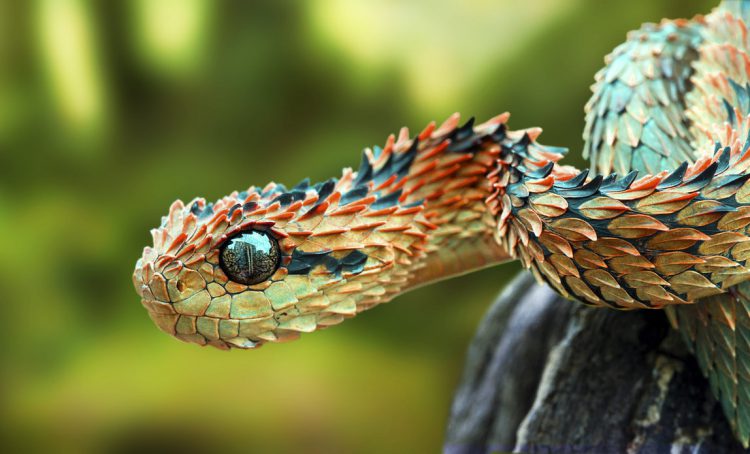 Similarly, frogs come in a wide variety of colors and patterns. 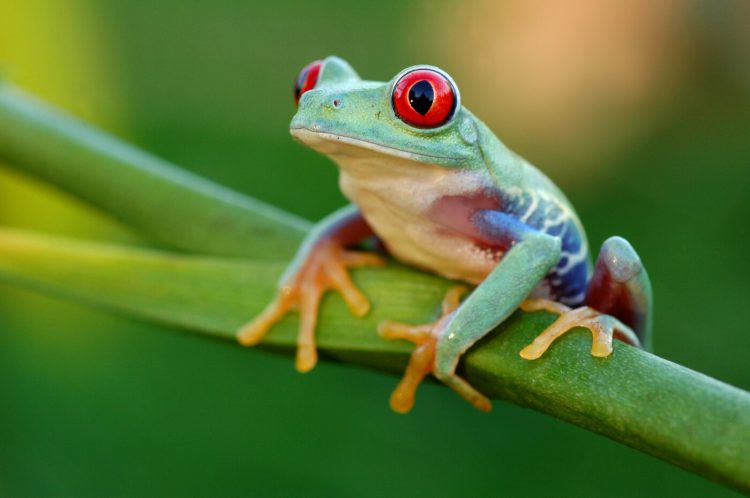 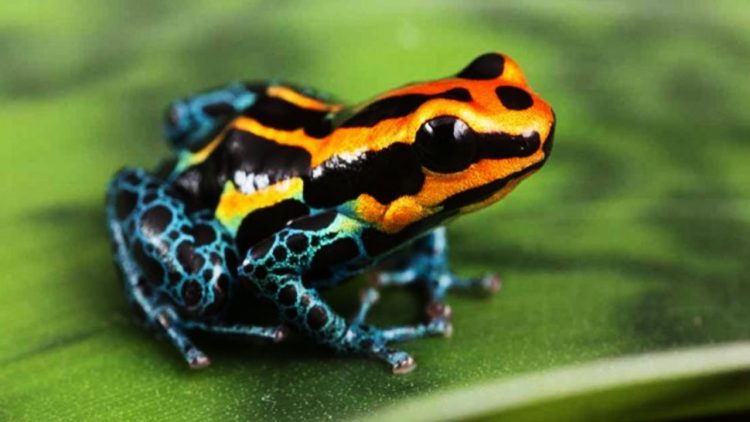 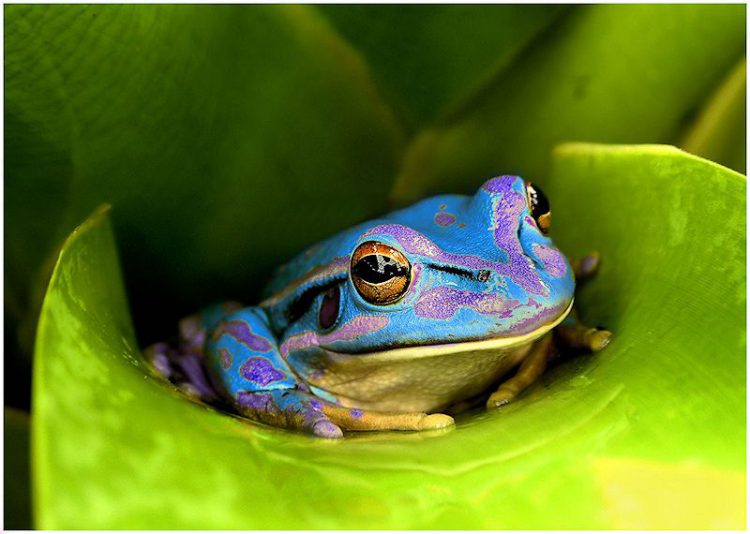 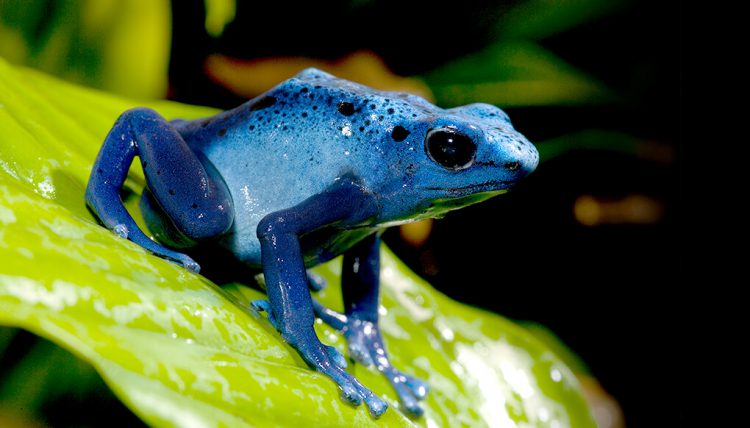 How to Play Seraphon

We’re still working on our Start Competing guide to Seraphon, but in the meantime, check out our review of the upcoming Battletome for more on how the army plays and what will be changing with the new rules.

This scheme is mostly focused on expediency as opposed being some amazing technical work, but I still think it can make even the old Saurus model look surprisingly good! I originally started seraphon with a more traditional jungle scheme, but when contrast paints came out I wanted to play around with them which brought me to this scheme. 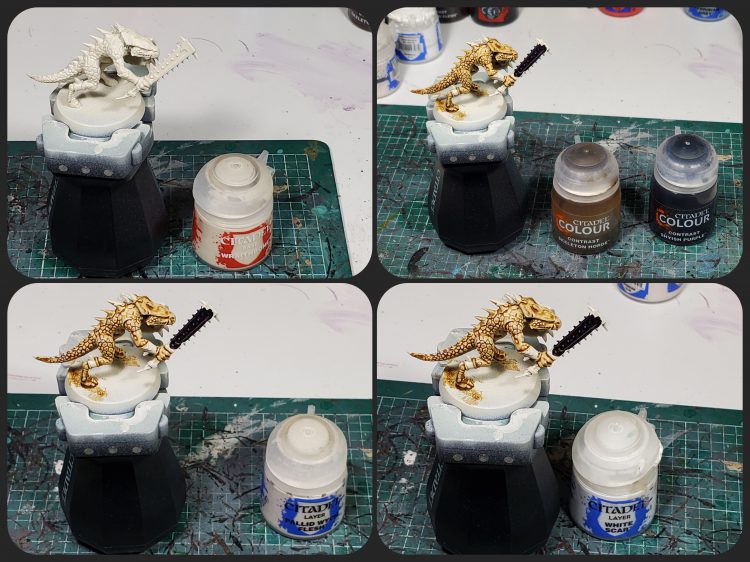 I started by airbrushing wraithbone over white primer, then I covered the saurus with skeleton horde and blocked in the obsidian with shyish purple. After some drying time, I did a quick drybrush of pallid wych across all the scale while avoiding the undersides, then I picked out a few raised areas with a further drybrush of white scar. 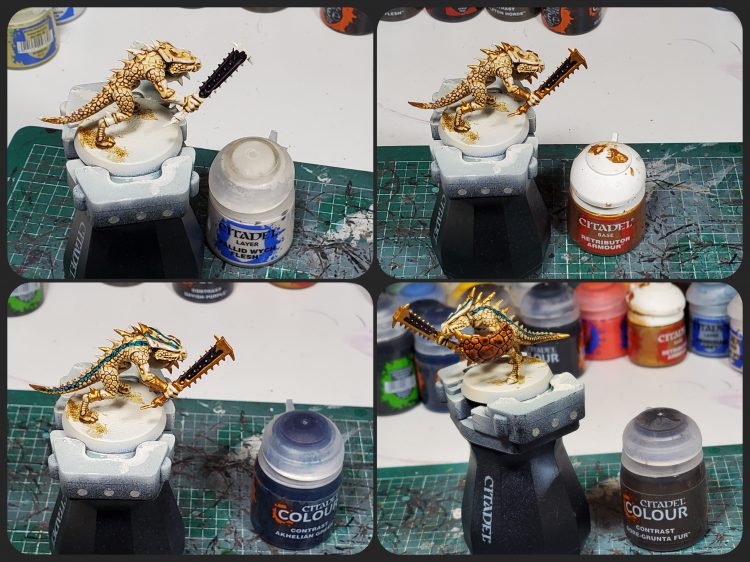 I hit some smooth sections like the face and hands with pallid wych with a conventional highlight. Then I base coated the gold with retributor, added the stripes with akelian green, and covered the shield scales with gore-grunta fur. 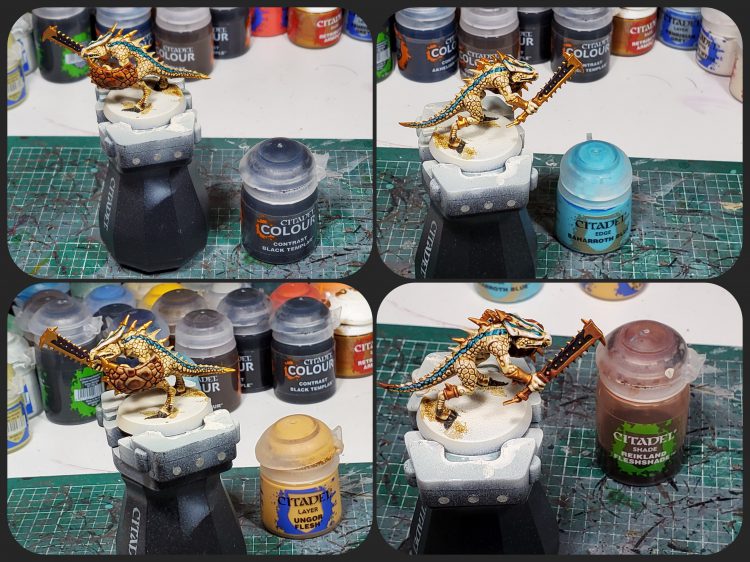 While the shield and stripes dried, I picked out the eyes, teeth, and claws with black templar. Then I returned to stripes with a highlight of baharroth blue, the tail section I did as a single line before picking out a few large body and head scales individually.  Next, the shield was highlighted with ungor flesh, I then hit the gold and obsidian with a generous wash of reikland fleshshade. 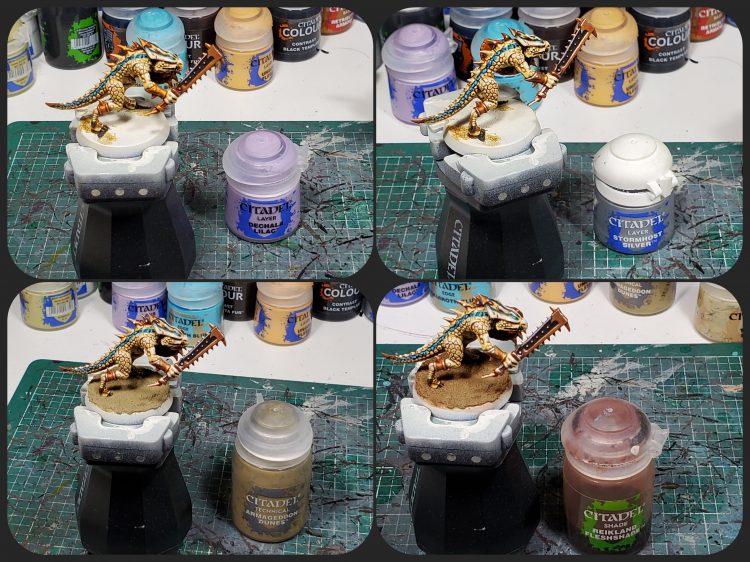 After the wash dried the obsidian was highlighted dechala lilac and the gold with stormhost silver. With the model now complete I turned my attention to the base, to keep it simple I used armageddon dunes, it was then washed reikland fleshshade. 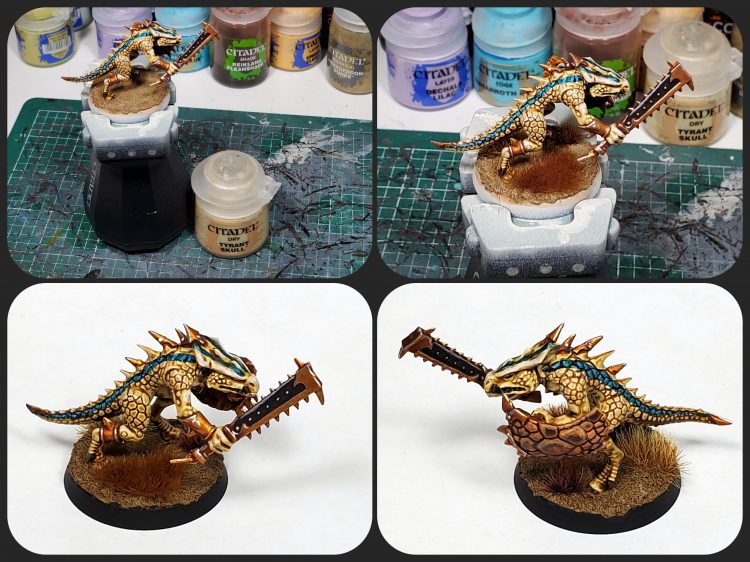 I then drybrushed the base with tyrant skull and raided my collection of gamer’s grass tufts for some desert vegetation. To finish it off I used abbadon black to clean up the rim. The whole process is pretty quick, and works great with batch painting given how many steps are dependent on the previous being dry. 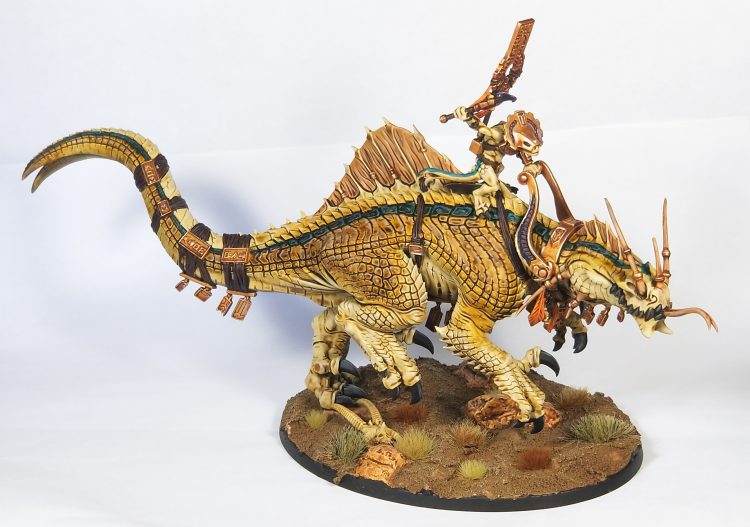 My first exposure to Seraphon (or Lizardmen?) was playing the Lizardmen team in Blood Bowl online with FUMBBL. They’re tough and fast and who doesn’t love dinosaurs playing football? When the Christmas Seraphon Battleforce got announced it seemed like the perfect time to pick up a bunch of the models for Age of Sigmar. Unfortunately for my dinosaurs I ended up finding a group to play 40K in so they ended up being tossed into a plastic bin where they still hibernate. I managed to paint a few of them before packing them away, with a color scheme that was meant to pop on the tabletop but also be quick and easy to do. Contrast paint helped a lot with this.

If you look through my hobby progress on my Instagram, you’ll probably notice that maybe 90% of them are purple. I can’t escape it. Much to my disappointment the Contrast paint Shyish Purple didn’t make a great saturated purple so I had to experiment a bit to find something I liked. For the skin and scales I ended up using a mix of Shyish Purple thinned with Contrast Medium and a drop of Scale75 Inktensity Violet to punch up the saturation. I wanted a little bit of color variety in the Sauruses so I played around with the rations to vary it up.

For the shields I chose a color that would compliment well with both the purple and pink of my Sauruses and Skinks. The green-blue of Akhelian Green worked well with no thinning needed. Having both units using the same colored shields brings some unity to the army and gives the impression they use the scales from the same creature for their shields.

Bone compliments well with the purple scales of the Saurus and I loved the idea of the head plate being actual bone. Unthinned Skeleton Horde worked great for this.

Nothing fancy for the metal of the spear, I used my usual Vallejo Mecha Color Steel for this. Similar with the various trinkets and trim I used Retributor Gold as it’s a nice easy gold paint staple.

This is a pretty basic and quick scheme and if I were to push it further I would add washes to the gold and steel, add highlights to the bone and scales, as well as picking out details like the eye and teeth.

I had some awesome pink and white ink I had bought and nothing to use it on… so I figured let’s do pink Skinks! The skin is done using thinned out Volupus Pink and then a second layer with unthinned the same paint is used on the scales after the first layer dries.

Similar to the Saurus, the shield is done with unthinned Akhelian Green and the trinkets and trim in Retributor Gold.The blowpipe is done with a unthinned Darkoath Flesh, it gives a sort dried bamboo look.

To finish it off I use Daler Rowney FW Pink Ink to punch the saturation up on the frill and use thin white paint onto the top of the frill. Lastly, I pick out the eyes with Averland Sunset.

I use some very straightforward techniques, since I’m primarily focused on getting things to a tabletop standard ASAP.

Hopefully this has given you a basic grasp of some things to try when painting your Seraphon. We admittedly haven’t covered everything that the Seraphon army could throw at you, but we’re definitely working on adding more units and different approaches with this one. If you have any feedback, questions, or requests, drop us a note in the comments below or email us at contact@goonhammer.com.