Infinity is an extremely execution-based game; far more than what you bring it’s how you use it on the table. You won’t get blindsided by new rules nearly as often as you’ll get blindsided by a player who uses a rule in a way you’ve never seen before. One of the biggest ways this can happen is if you’re up against someone who really knows their way around smoke grenades.

Smoke is a very powerful rule in Infinity because it is totally binary – either you’re in it or you’re not, either you shoot through it or you can’t. For this reason there is no better way to bypass and counter apex pieces; it doesn’t matter how terrifying that Cutter TAG is if it never gets to fire its gun in the first place. Further, smoke often comes on the kind of models who can get the most out of it: close combat experts who can demolish anything they are able to close with. If smoke has a weakness it’s that it can be very order inefficient – if your opponent has sufficient long range defense it can be very impractical to try to cross the entire table under the cover of smoke.But sometimes that might be all that’s left to you – so let’s talk through it.

Three Angry Gorillas VS The Forces Of Civilization

While there aren’t any special techniques associated with it in this edition, smoke grenades as BS attacks get full fireteam link benefits. This means a Datarazi in a core link (which they can do!) is throwing two smoke grenades within 8″ at 14+3+3. Two dice on twenties isn’t always the face to face roll you want to take, but it sure as heck ain’t nothing, especially in ARO.

Technique One: The Speculative Toss

This is the most basic technique, a brute force with numbers. It’s very order inefficient – costing you an Entire Order and giving you usually a 50/50 chance of landing the grenade anywhere within 8 inches. Sometimes that’s the correct play but do realize you’re making a coin flip to pull it off and sometimes that’ll just go against you three times in a row. Also if you’re doing it within zone of control of an enemy model that model will try to dodge out of the impact which will make your life even more inconvenient. 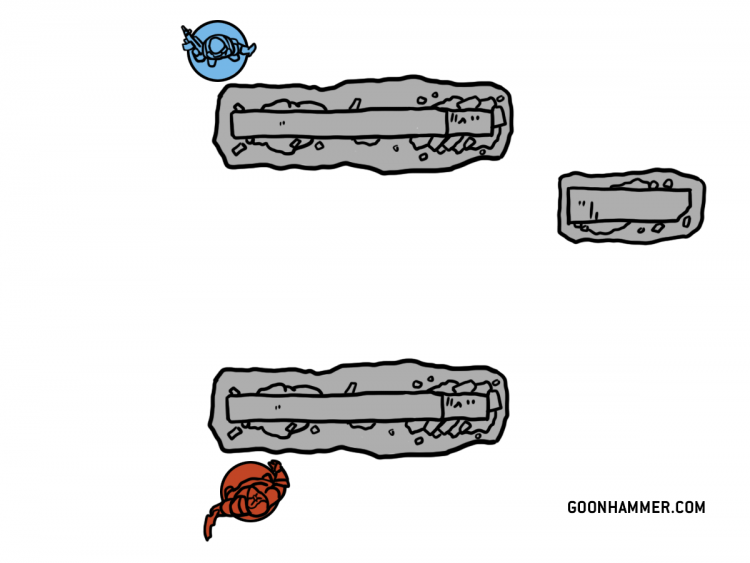 Dalii wants to stab Fusilier Hugo with his sword but just isn’t quite close enough. He throws a smoke grenade over the top of the wall to try to get this entire situation resolved in a single order, accepting a -6 penalty to his throw which brings his 17 down to 11. 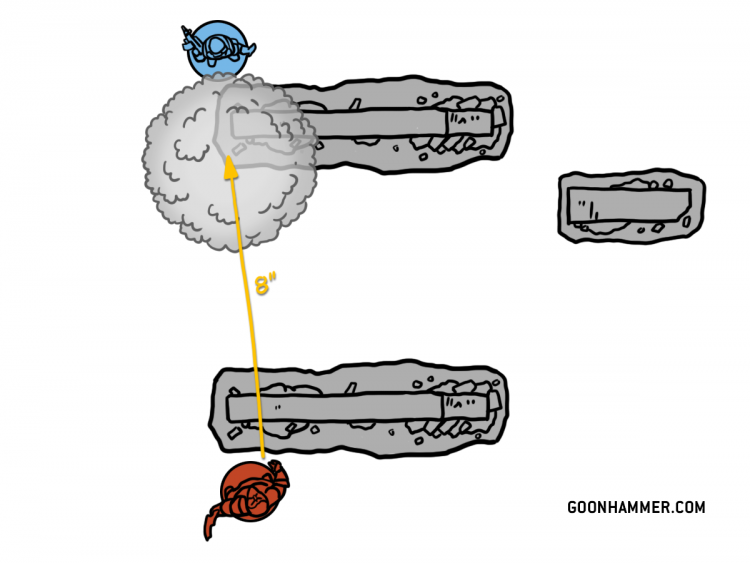 This technique is how you can use smoke to cross large open areas without having to rely on sharp corners. In this technique you lay down multiple smoke grenades leaving very narrow gaps between the templates that you can lob the next grenade through, letting you close with your target without having to come to a dead halt. 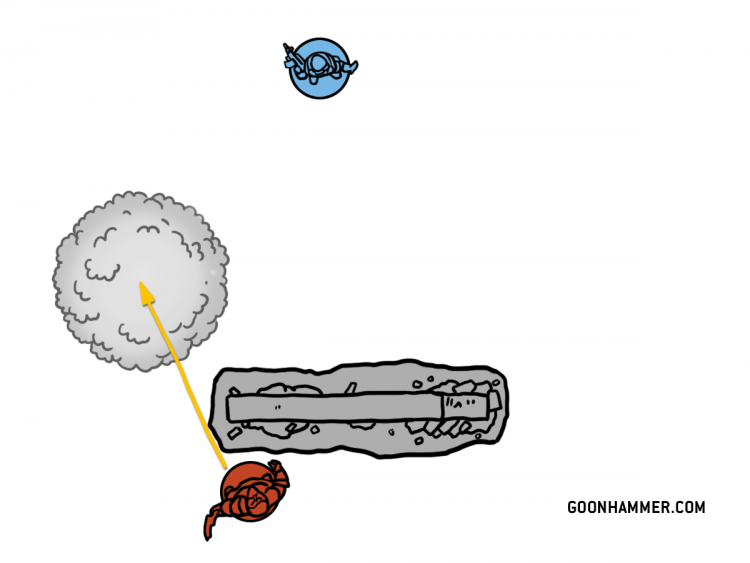 Dalii walked under a ladder and kicked a black cat on his way to work today so doesn’t feel like he wants to trust the success or failure of his stabbing to chance. Instead he peeks around and tosses a smoke grenade around this corner… 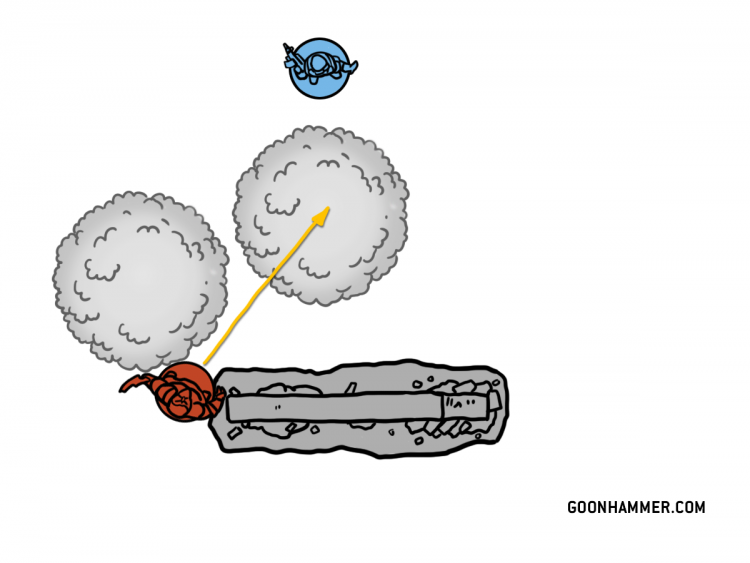 … And then another, staying out of LOS all the way… 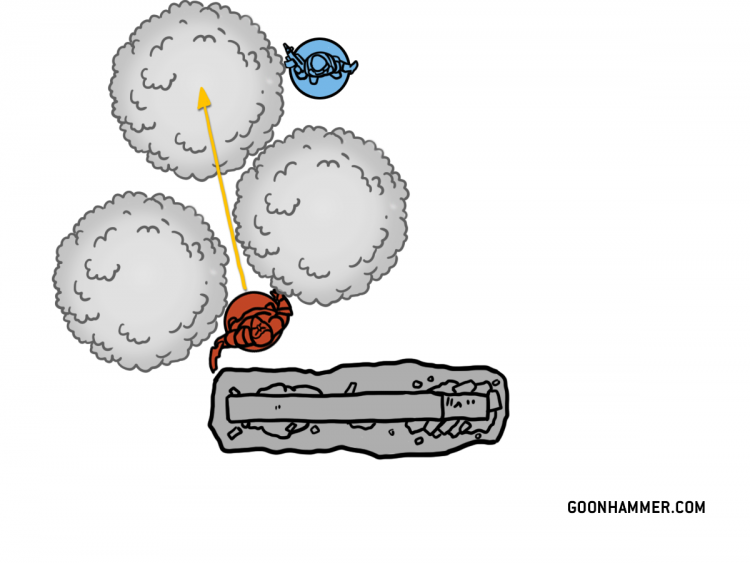 … thus giving him a clear path to Fusilier Hugo.

Technique Three: The Visor in the Dark

While a warband is great at using smoke to get work done, they can also team up with a MSV troop. The most basic is a single smoke grenade to cover the MSV troop making long range shots – the MSV troop will get to shoot through the smoke while any enemies responding will take a -6 penalty to retaliate, which stacks with other modifiers like mimetism and surprise shot. This, however, does not work on hostile link teams as they have Sixth Sense, a rule that counteracts this penalty.

Simple, powerful and effective – but there’s an even worse version that happens at close range. 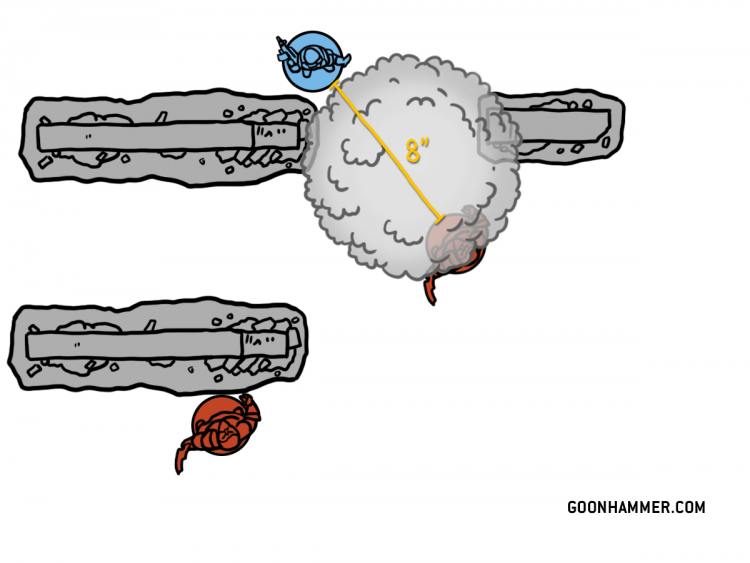 Dalii has made his smoke toss but doesn’t have enough orders in his group to press the advantage. Instead, Yelvii the Yaogat activates. He walks within 8 inches of Fusilier Hugo.

Fusilier Hugo now has a valid Dodge ARO – a model has activated within 8 inches of him. He has two choices: either take the dodge, or forego ARO all together this turn. This means when Yelvii proceeds to shoot him with his combi rifle he cannot opt to shoot back, even with a -6 penalty.

Rules Note: Stealth negates this interaction – it denies the dodge ARO trigger from movement, thus preserving Fusilier Hugo’s ability to shoot back. However, Stealth is an Optional Skill, so if you’re using this technique with a model that has stealth be sure to flag that they aren’t using it.

If you have a powerful MSV overwatch piece and are lucky enough to also have smoke in your faction, you can do the suicide smoke toss technique. When an enemy model comes out to engage your MSV piece, an adjacent warband can throw smoke so it lands covering the MSV troop but not the warband itself. This means the rolls are not opposed – the smoke isn’t contesting the BS attack – so both models get to roll without it being a face to face roll. This means the smoke tosser is almost certain to die from this. 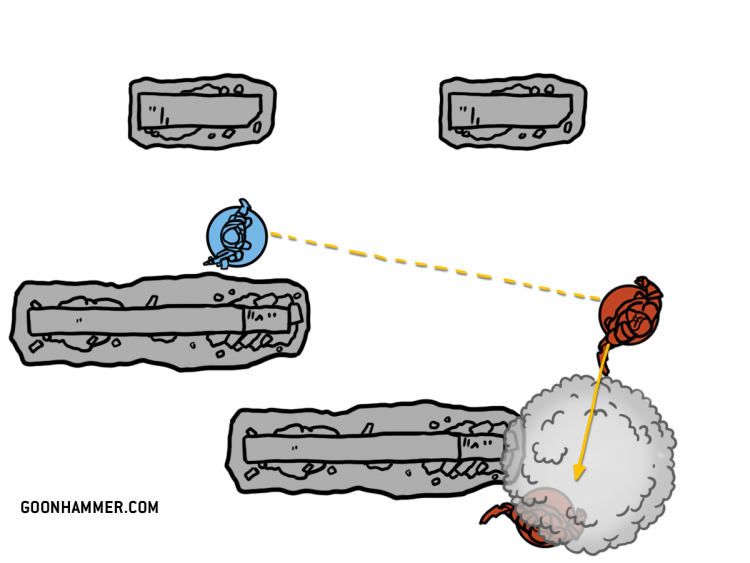 Dali the Daturazi owes Yelvii a beer and sees an opportunity to get out of having to pay it back to him. When Fusilier Claire rounds this corner, he tosses a smoke grenade to cover Yelvii and not himself. This means that if Fusilier Claire kills him and engages Yelvii later in the turn, Claire will be taking the -6 penalty for shooting through smoke.

Eclipse Smoke is like regular smoke but cannot be seen through by MSV troops. Oftentimes you’ll use it in the same way as normal smoke, but there can come instances where you use it to totally reshape the entire battlefield. 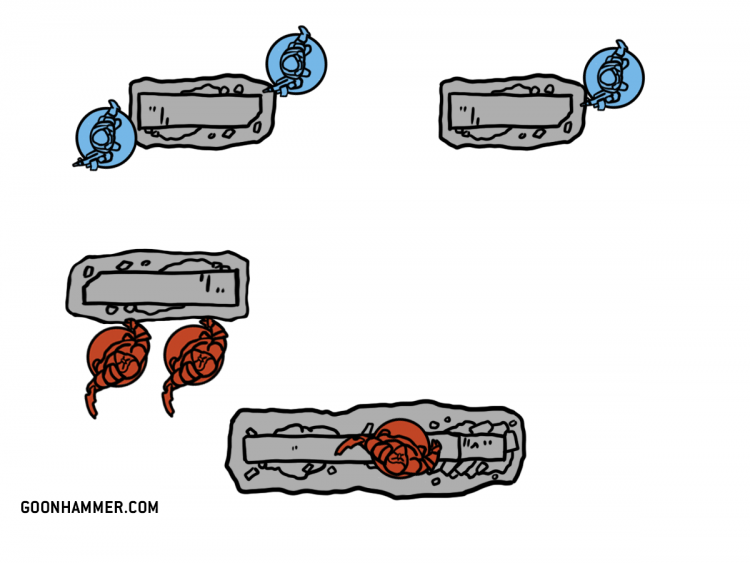 In this situation, three models have line of sight to Yelvii: Fusiliers Hugo and Claire, and Karma the MSV2 sniper. Yelvii is not keen on fighting them all at once, but fortunately he has help – his buddy Rachii the Rasyat failed his Combat Jump roll to land behind the enemy team and so is helpfully available in Yelvii’s deployment zone to help unpick this puzzle. 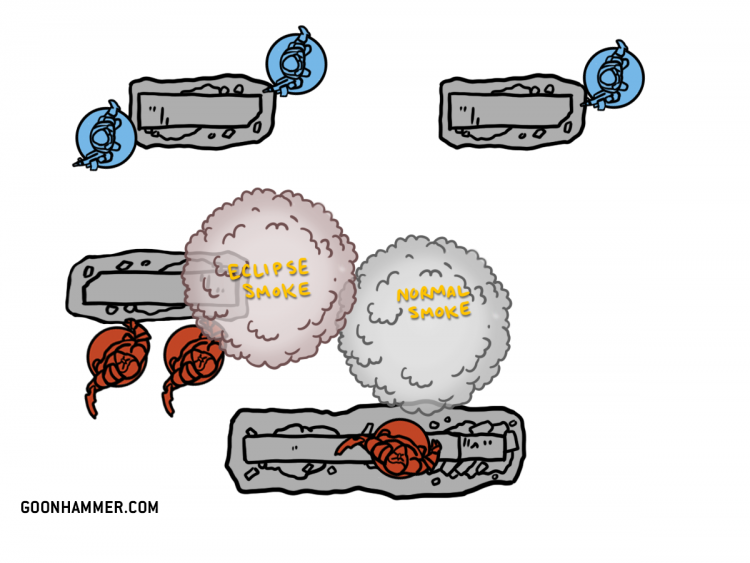 Firstly, the Daturazi throws regular smoke covering Yelvii’s view of the two fusiliers. Then, the Rasyat throws Eclipse Smoke to block off the view of the Kamau. 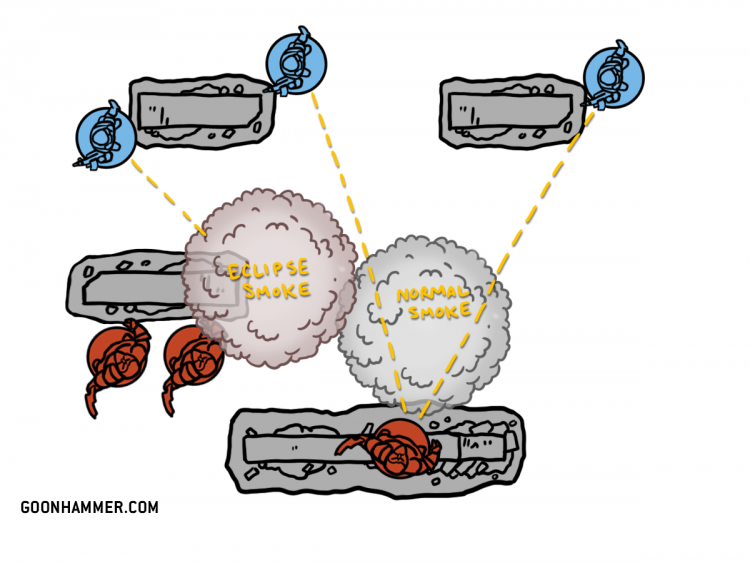 Now, concealed by smoke, the Yaogat can stand and engage the fusiliers one at a time with the cover of smoke without having to engage the Kamau at all.