For small-scale combat, Kill Team is good a way to get yourself and friends into tabletop gaming with a relatively light amount of money and effort. Constructing your teams, considering individual equipment, and improving their skills over time can be a satisfying experience. This allows players to fill faction rosters with a limited number of models from the wide variety of kits available and invest their hobby time into modelling and painting single pieces. Over time, Kill Team expanded to include more “elite” models by way of Kill Team: Commanders and, appropriately, Kill Team: Elites. So now you and your friends/gaming club have a good selection of faction models and you think it might be time to break out into larger skirmishes in the Warhammer 40,000 universe–where can you go from here? 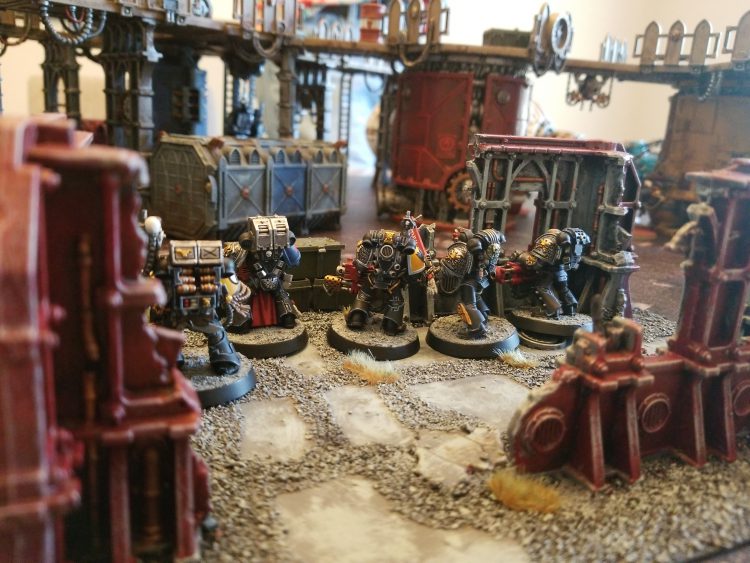 For those readers who are not familiar with the “standard” Warhammer 40,000 game format, the game type Kill Teams would be looking to expand to is Combat Patrol. This is limited to 500pts and is created on a 30″x44″ table size–for further information related to Combat Patrol generally we have a previous Little Wars article just for you! Pulling existing models into larger games is pretty simple, especially as Warhammer 40,000 has done away with the strict “what you see is what you get” or WYSIWYG policy, which means unique modelling options won’t restrict your Kill Team models from joining the fight*. The first thing you’re going to need to consider when delving further into large scale is which avenue you want to pursue: standalone battles or progressive campaigns?

The “standard” Combat Patrol format adheres to the Core Book rules and missions, which outlines a format for a battle using non-Crusade units, relics, and stratagems. Regardless of your opponent or how often you play with the list, the power and options available to your army are not going to change. This format is great for regular play, as it allows you to match up with any random person and get in a game without any surprises that custom/upgraded units might bring. If you and your friends are looking to have irregular play or intend to use your armies outside of your gaming group this is probably the format you’ll want to use. It may also be useful to run through a handful of these types of games to get yourselves more acquainted with the rules even if your plan is to start a progressive campaign.

To keep the narrative flavor of your previous Kill Team adventures, expanding into progressive Crusade campaign rules is going to be your best bet. Crusade (a topic we have covered rather thoroughly*) affords players a multitude of options that are not normally available, including general unit-wide enhancements or individual relics and other upgrades that can make otherwise “good” units into powerhouses. Long-time Kill Team players will likely have favorite customized models that have a storied history and bringing them onto the tabletop in a larger battle may mean either promoting them as characters or making them the leader model for a larger unit of similar models. Have an Intercessor with some special equipment and a detailed paintjob that explains their many trials and tribulations? Considering bringing them on as a Lieutenant or Captain. It would make sense that such a veteran would be useful in a leadership role as the scope of the battlefield expands. Everything may not be a 1-to-1 match, but there’s enough options that players should be satisfied that they can continue placing their venerable models onto the table with some unique twists. 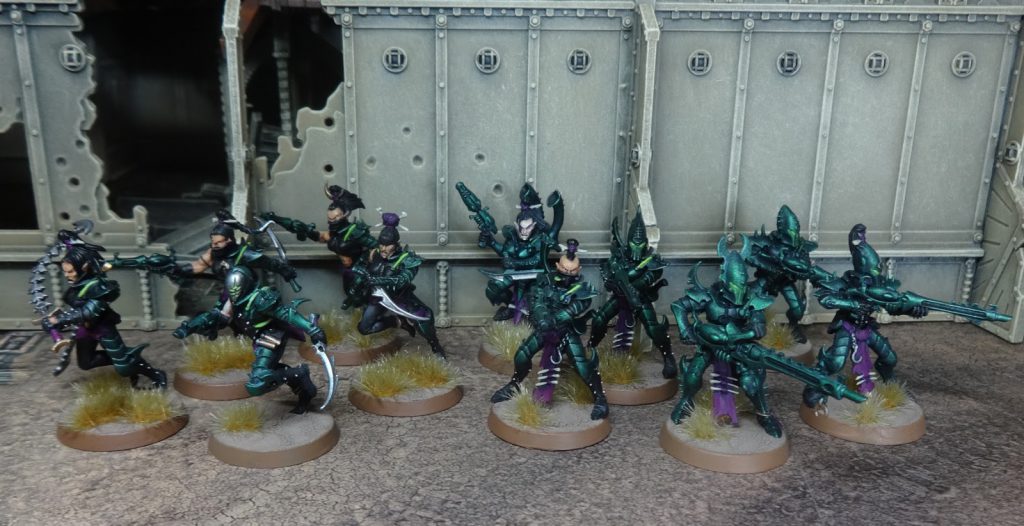 Expand your Kill Team board and terrain to full scale

From a high-level, this is a pretty simple step. You and your friends will have some surface you’ve been playing on sized to 30″x22″, likely a ‘Killzone’ board from either the Kill Team Starter Set or one of the Killzone boxed sets. The reverse side of the maps in all the Killzone boxes is a ‘Sector Imperialis’ style map that you can join together, and two make a 40k sized map suitable for games up to 1000 points in size. If you created your own board that works too, just be sure to double it to 30″x44″ as a normal Kill Team area is just too small to support “regular” Warhammer 40,000 play and would give certain units incredible advantages.

Terrain-wise, the Killzones (particularly the Starter Set, Sector Fronteris, and Sector Munitorum) combined will give plenty to work with (actually more than the recommended amount). The Sector Mechanicus boxed set is not as good a deal, but does fit in nicely with the Starter Set terrain. Before you dive deep into picking up terrain sets, it’s worth thinking about what sort of table you want. Sector Fronteris fits nicely into a ruined city, Sector Munitorum gives you 4 large containers and a bunch of scatter terrain (gluing some crates/barrels together gives you some little barricades). You can assemble one crate on the cart and potentially fight games over an abandoned supply run. Together they give you fairly good table coverage. 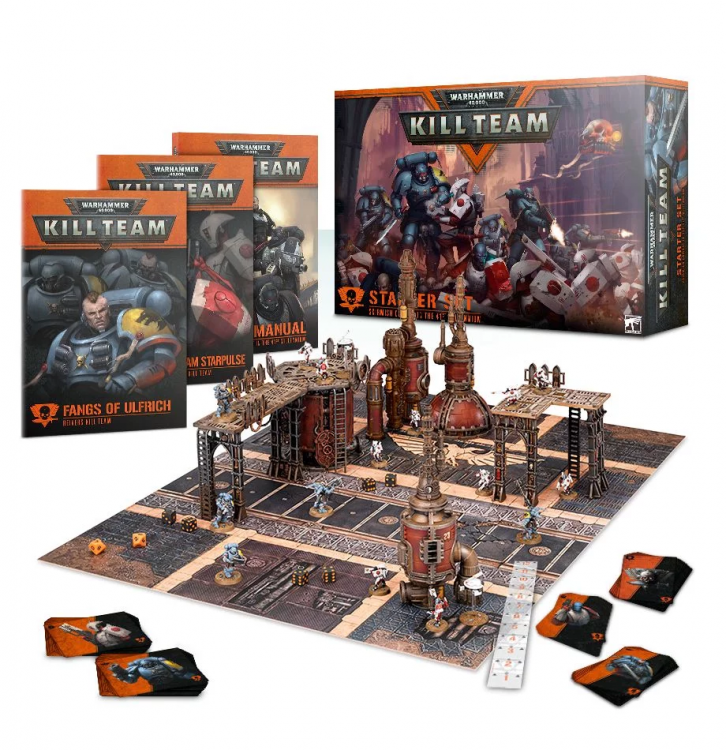 Surprisingly decent value, with a couple of kinks.

The Starter Set combined with Sector Mechanicum gives a reasonable Mechanicus themed table, though more LOS blocking terrain would be nice. Keep in mind that the cover rules between Kill Team and Warhammer 40,000 are different in potentially important ways. What might have afforded your models cover in Kill Team will leave your units exposed in the larger game. We recommend coming up with a good variety of terrain, including pieces that you can use as Dense and Obscuring. Just like KT, you can feel free to get inventive with your setup but understand that there are some standards you’ll want to meet to keep terrain meaningful/interesting.

If you’ve not already separately painted your terrain, plan it out as a project and paint it in a batch. Look at scatter terrain you can create from barrels and crates, look at connecting pipes to buildings to extend building footprints and provide additional spots of cover for models to claim. Look at basing your buildings on MDF or vinyl tile, and using sand, gravel and modge podge to blend them into the basing. There’s a lot that can be done to improve the look of ruins for example, so they look more ruin-y. In addition to just looking better, the footprint of your terrain can be important in quickly and easily determining what models are in or out during play. Sure, a ruined building on its own is okay, but when it comes time to hashing out where its cover begins and ends it can be a little murky. It’s best to save yourself a headache and add a clearly determine border.

Expanding your Kill Team roster into a viable army

So you’ve decided what kind of game you’re going to play and where you’re going to play it. You’ve got a handful of great models from a faction and you want to know where to grow from there. Well, firstly take a gander over at our handy-dandy Getting Started article series, which should answer a good number of questions you may have about the various models/rules and how they play. Once you have your head around what kind of playstyle you want, look at your current Kill Team roster(s) and see how you can part the models out into appropriate units.

This is a pretty straight-forward conversion (as a lot of Space Marine lists will be). As Intercessor units have a minimum size of five models, we can collect all but the Sergeant into one Troops unit. This unit can only have one grenade launcher, but having a second model with that bit isn’t going to be a serious issue. The Sergeant gets a promotion (huzzah!) to Captain and magically his bolt rifle becomes “special issue”.

As mentioned above, it’s all about what kind of playstyle you envision and in this particular case I am considering a flexible combat patrol that has some forward-capture capability as well as some good general shooting to engage where needed. This uses two new kits–Infiltrators and Hellblasters. Personally I was thinking of this as a Dark Angels list, as they are fantastic stoic defenders and Weapons from the Dark Age really gives the Hellblasters some teeth to deal with larger threats. Sprinkle in chapter tactics, relics, and warlord traits to taste and at Combat Patrol levels this should perform fairly well.

This one is a little bit trickier to convert, as Tyranid Warriors have a minimum unit size of three and while what’s in the Kill Team is a legal selection it leaves the army with no HQ. What to do about that? There are a number of HQ options for Tyranids and most of them are pretty strong but they’re also quite expensive. What this list has already are some pretty fast units with a good core of Warriors; I would probably recommend to pick up an HQ that matches the speed of the list and bolsters that core further. I’m thinkin’ a Broodlord and a box of Warriors will put this list on track for a fun Combat Patrol list, using one of the Warriors as a Tyranid Prime (with all the cool extra chitin/tail bitz) to buff the Tyranid Warrior unit and the other two to bump up the unit size from three to five models. This list presumes you actually have the other two Raveners that came along with the kit.

As far as strategy goes, the Broodlord can draft behind the Hormagaunts and use them as cover as it nears its target, tossing a “feel no pain” onto whichever unit feels most threatened. The Warriors are a tough block to hold a backline/central objective, but don’t feel shy about using them offensively as their boneswords can make quick work of a lot of units. While they can be used to decent effect for surprise attacks, I’d rely more on the Raveners to pop up and hold an unguarded objective. Frankly they’re not especially tough or effective, so hiding them out and scoring critical points is making good use of them. That said if they have a clean shot at a vulnerable target, hey, treat yourself. 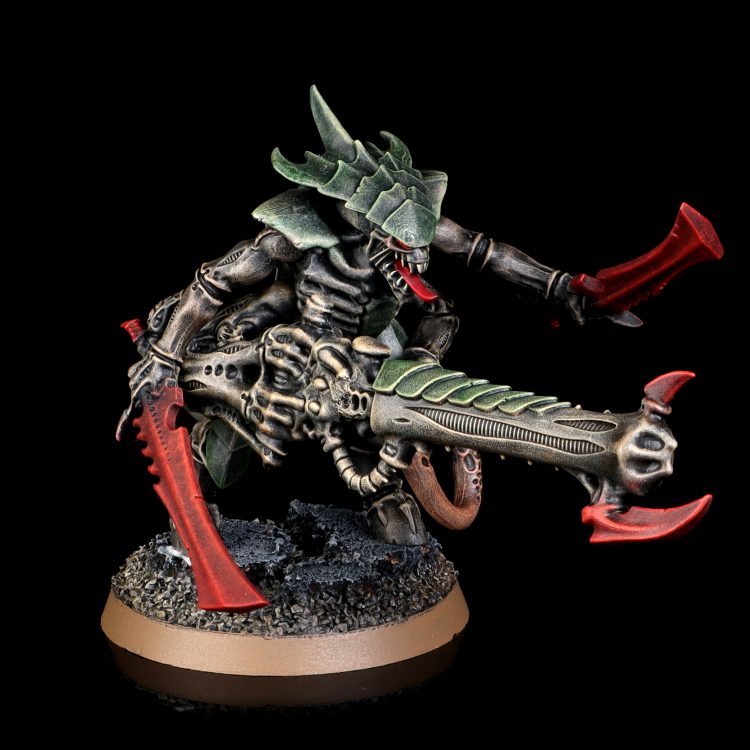 Taking the Next Step

Hopefully this article has given you some inspiration toward growing your collection and joining the Warhammer 40,000 gaming community at large. As you can see from the above examples, it doesn’t take much to bump your Kill Teams into viable armies. While there are a number of critical differences between the two systems that will take some getting used to, making the jump offers new and interesting hobby and gaming opportunities that we think are worth your while. As always, if you have any questions or feedback, drop us a note in the comments below or email us at contact@goonhammer.com.

* Taking part in events may require your models to be WYSIWYG, but most organizers are fairly flexible on this if you discuss the difference with your opponents ahead of the game
** https://www.goonhammer.com/tag/crusade/