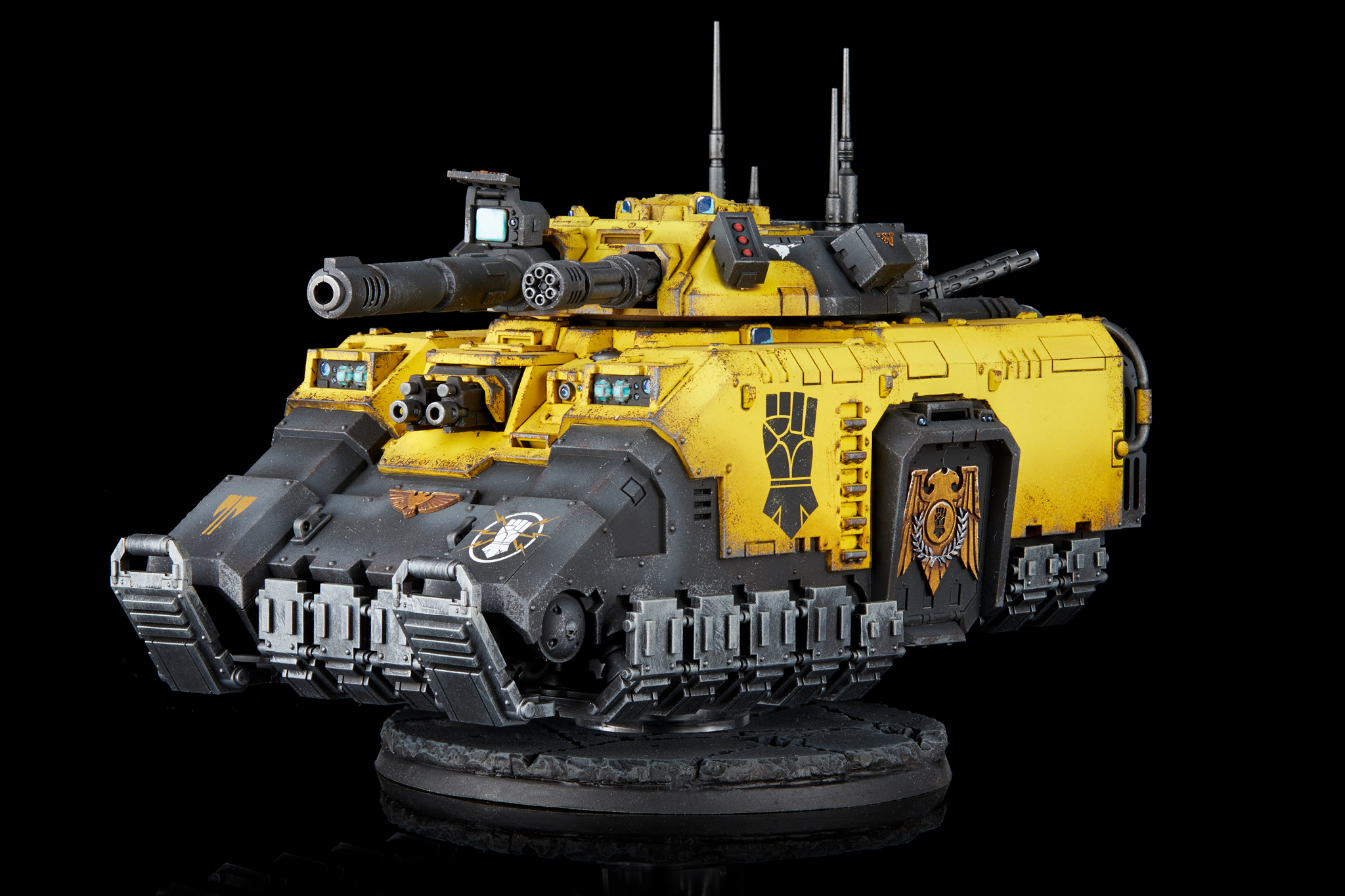 With the sheer volume of units and options available to 40k players, it can be difficult to determine if something is good and how to best use it, especially if the unit is a new release. In Mathematical Musings, our resident Tech-Priest Ellarr does a deep dive into specific units and evaluates their strengths and weaknesses, and talks about how they can be put to use on the battlefields of the 41st millennium.

After the success of my previous articles covering the two new tanks for the Adeptus Mechanicus, I’ve had several people inquire about the new toy for the Adeptus Astartes, the Repulsor Executioner. My natural response was “Gladly! It would be an interesting exercise to see how it compares mathematically to its older cousin, the humble Repulsor!”. Now given that I’m far from an expert on Space Marines, I’m calling in a little bit of help when it comes to assessing their usage on the tabletop, so as to avoid overlooking mitigating factors, strengths and stratagems that might transform it or modify its abilities. Now then, let me take a sip of my morning cup of coffee and take a look at what this ‘Executioner’ is…

One look at the Executioner conveys the sense that Games Workshop wanted to pile gun after gun on the same vehicle in order to avoid repeating the mistake of something like say, the Vindicator. Let’s just say it’s not my favorite model (visually, it also reminds me of “The Homer”, but in 40k tank form). Let’s take a look at the datasheet: 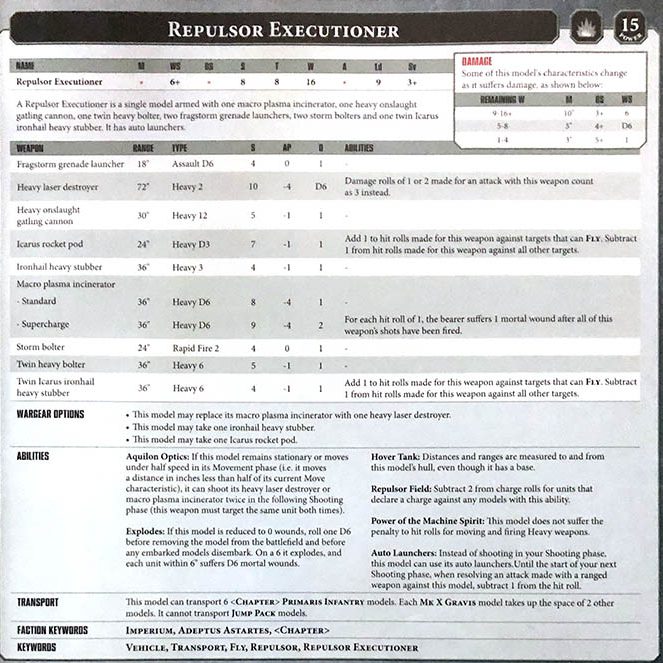 O-oh no.. OH NO!! WHO DESIGNED THIS DATASHEET?

Forgive me a moment’s madness – there is a lot going on with this datasheet and so many options that I won’t even attempt to cover every single permutation of the Executioner and its Repulsor cousin. Instead I’m going to identify some optimal configurations for both based on their uses and analyze those, because quite frankly I value both my time and your time too much. You’re welcome. What I will do is cover what is considered the ‘optimal’ configuration for both, and if you desperately want your configuration covered I can add on to this article but trust me folks, this thing is going to be long enough as it is.

In addition to analysing the Repulsor and the Executioner, I will be doing comparisons to some of the other big guns and tanks available to the Adeptus Astartes, such as the Contemptor Dreadnought, the Relic Leviathan Dreadnought and the Sicaran Venator, as well as lighter units such as Primaris Aggressors, Veteran Bikers with Storm Bolters, Intercessors and Hellblasters. Similar to my analysis of the Skorpius tanks, my intention is to see how the Repulsors stack up when compared to other options in the army and whether they are worth the cost.

First off, let’s start with the basics – what’s the general performance of these guns outside of context?

The Role of the Repulsor Executioner

The Executioner is a strange beast, having one foot in the world of transport, and a second foot (with 6 different knives taped to it) in the world of heavy tanks. I like to imagine the inside of the doors have a ‘You must be this tall to ride’ sign and a patronising Lieutenant patting those poor smol marines on the head as they’re turned away. Anyway, once we set aside that you could choose to put some Primaris inside it, this thing is a tank with an inferiority complex, packing enough firepower to make a Techmarine blush. I’ve got real mixed feelings about transports in 8th edition, because the way the rules are written there’s little purpose to them unless the transport offers either preposterous value for its cost or has impressive value-added special rules. As such, I will primarily be judging both the Executioner and it’s older brother the Repulsor on the merits of them as gun platforms, and considering any transport capacity to be a marginal bonus.

Because of the number of weapons the Executioner has, it is hard to simply categorise it as ‘Anti-Personnel’ or ‘Anti-Tank’. The tank’s guns are designed to fill multiple roles, such that it will almost always be splitting its fire on the tabletop.

So in the interests of being meticulous, I will judge the weapons of the Executioner based on two categories: performance as Anti-Tank and performance as Anti-Personnel, assessing these weapons against likely targets you would use them against. The overall assessment will be split into two parts:

Why? Because while for most weapons, the ideal target type will be obvious, it’s still important to understand what the expected value for shooting at a given target will be. Note that this is the raw performance of the Executioner alone, ignoring factors like re-rolls from a Captain or Lieutenant. We will also ignore factors like faction traits – so assume the Crimson Hunter Exarch has only its in-built -1 to hit, for example. We will use the standard spread of targets from the Skorpius analysis, and after my faithful servitor G-00N crunches the numbers, we get:

Average Damage Inflicted, by Target (Per Weapon versus Personnel)

There really isn’t that much to say about these numbers other than that it will likely delete an infantry unit a turn if you were to decide to throw everything you have at that one unit. We’ll be able to draw some more meaningful conclusions once we compare it to other units operating in the same space.

Average Damage Inflicted, by Target (Per Weapon versus Armor)

As you might expect, most of these weapons aren’t worth pointing at armour, but it’s worth knowing the statistical averages for situations where those extra 2.7 wounds (from the incidental weapons) inflicted on a Knight may be invaluable when assessing what to point where when planning your shooting phase.

Comparison to Other Units

So let’s bring in our units to evaluate against. Having discussed this topic with a number of Space Marine enthusiasts, I have compiled a short list of units to compare against for the purposes of efficiency evaluation.

Average Damage Inflicted, by Target (Firing all weapons versus Personnel)

*The Leviathan Dread calculation does not include the heavy flamers as in most game situations you wouldn’t be firing those weapons every turn so I felt it would skew the numbers. Also, it’s worth bearing in mind that the Leviathan’s weapons are damage 2, so against targets with access to Feel No Pain saves – which is almost all of these! – it will potentially outperform some other options, and it way outperforms on the Terminators, since that 5.6 is “dead Terminators” unlike the other figures.
** Double-firing assumed for Aggressors.

The Repulsor falls short of some competitors for pure chaff clearing but pulls ahead of the pack when it comes to taking care of more elite infantry, due to having access to higher quality shots with AP, compared to the quantity on offer from units like the Veteran Bikers and Aggressors. That said, the Veteran Bikers and the Aggressors are clear standouts here, but each come with caveats – the Veteran Bikers are much squishier than the Repulsor until you pay out another 16pts for their storm shields, whereas the Aggressors are much slower and lose out on double-firing if they have to move, and are thus harder to leverage to their maximum effectiveness – you can reasonably expect to halve their numbers on turn 1.

If we model this as points per wound we get:

Points per Wound Caused (By Firing Unit, Per Target)

This is a more accurate reading that accounts for variance in points costs, and it tells us quite clearly that while the Executioner is no slouch at taking care of personnel, it is not a stand-out option – though it’s worth noting that as a generalist it fares better than any other option on the list, with a competitive 20pts per chaff wound and a best-in-class 30pts per MEQ wound. So let’s move on to Anti-Tank comparisons shall we?

Average Damage Inflicted, by Target (Per Weapon versus Tanks)

Please note that unless you enjoy the thought of obliterating your Hellblasters in a shower of hot plasma, pointing them at the -1 to hit Crimson Hunter Exarch while supercharged might not be wise)

Here the Executioner fares much better, being solid-to-great against the spread and being best in class against Knights, which is very relevant in the current metagame. Hellblasters are still an incredible choice if you’re within 15”, but they are very fragile comparatively so take those numbers with a grain of salt – halving them (to account for long range) or failing to supercharge them causes them plummet in the rankings. After taking an average of our two most common platforms, the Predator & Leman Russ, we get this:

So, a couple of notes and observations from this exercise right away:

We could get more granular and split out the fire (often times you would point the Heavy Laser Destroyer at tanks and everything else at personnel), but trying to get a solid sense of efficiency at that point becomes very difficult, and usually comes down to judgement calls on a per-case basis. You might call this “being good at the game.” What are the strengths of the other units in your list? That may affect your target allocation for each of the Executioners many weapons.

Usage In-Game and Other Considerations

When it comes to using the Repulsor Executioner, there’s no need to reinvent the wheel or get fancy: Although the tank offers some transport capacity, its primary role is going to be as a gun platform, and thanks to its double-firing ability, one with movement ideally capped at 5” per turn at full health. As a result, it’ll primarily be slotting in to Marine armies to fill a similar role to Predators, Repulsors, Contemptors, and Leviathans, and will likely see tournament play in groups of three surrounding Roboute Guilliman in order to leverage his incredibly good re-roll aura.

Even in non-Ultramarine armies, the Executioner offers plenty of value for its points as a weapons platform, competing well on a per-points level with many other options the Space Marines have access to (though its cost may be a factor in some armies). Its major downside is that, by not being a Dreadnought, it loses access to the Chapter Traits that make Contemptors so good in certain lists (we’re looking at you, Raven Guard). As a result, their value will largely depend on the overall army strategy and the Chapter Tactic being employed, but they otherwise stack up well in terms of their damage output.

Next week I’ll be looking at how it compares to its older sibling, the Repulsor – and determining which of the two tanks is better value for its points. I’ll also be crunching the numbers on re-rolls for the tanks (including measuring Guilliman’s impact) to see how far we can push the output, and required dice-rolling, of these ridiculous hover tanks. Until next time!