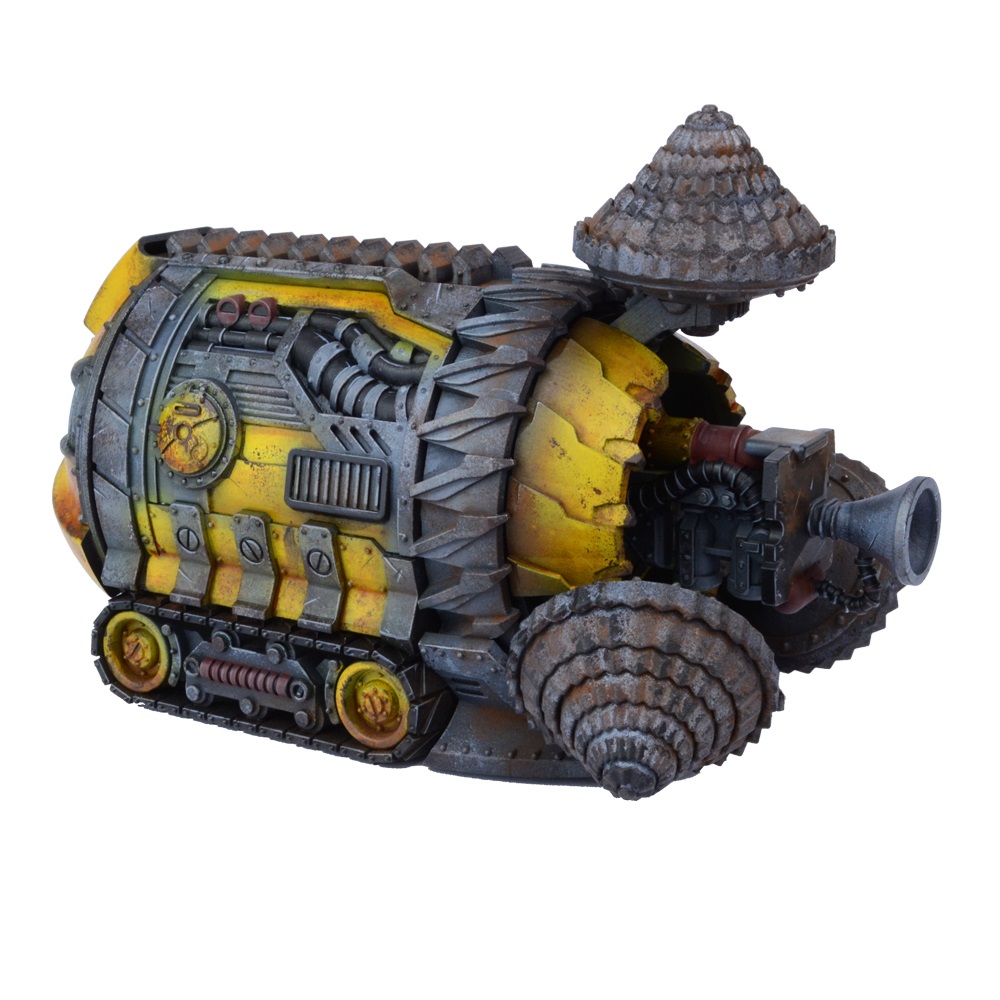 In our Miniature Review series, we look at the wide world of tiny soldiers for cool stuff to share with all of you.This week, Liam is reviewing the Veermyn Tunneller from Mantic Games.

Disclaimer: The miniature in this review was provided to Goonhammer.com by Mantic Games.

If you’re a Warhammer player, you’ve probably heard someone talk about Mantic Games. If nothing else, you may have read our review of their Giant a few weeks ago!

Mantic produces a whole range of different models for a variety of different systems – they have a number of home-grown ranges as well as a few licensed products such as the Hellboy and Walking Dead.The Veermyn Tunneller is for Warpath, their sci-fi game. 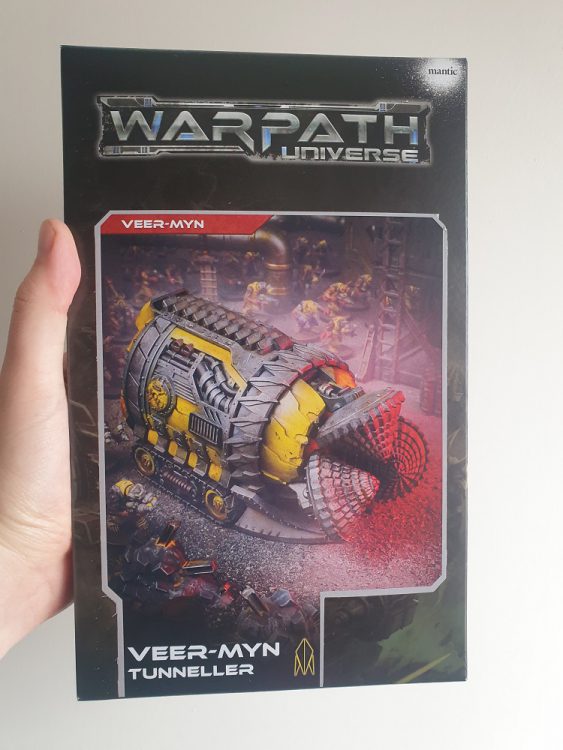 Unlike the giant you do, at least, get a box! It’s even quite a nice box, with dramatic lighting and a battle scene. All good so far. 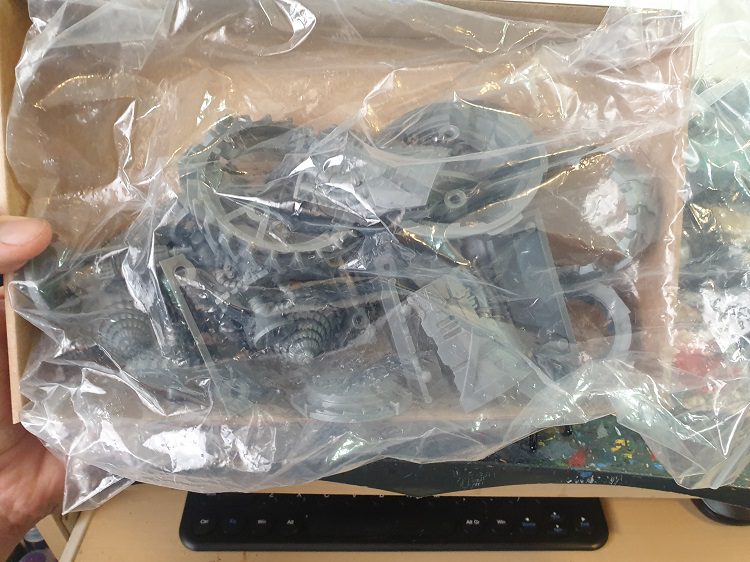 Inside the box is this jumble of bits in a plastic bag. They’re just loose in there, with no instructions – a GW kit this ain’t. 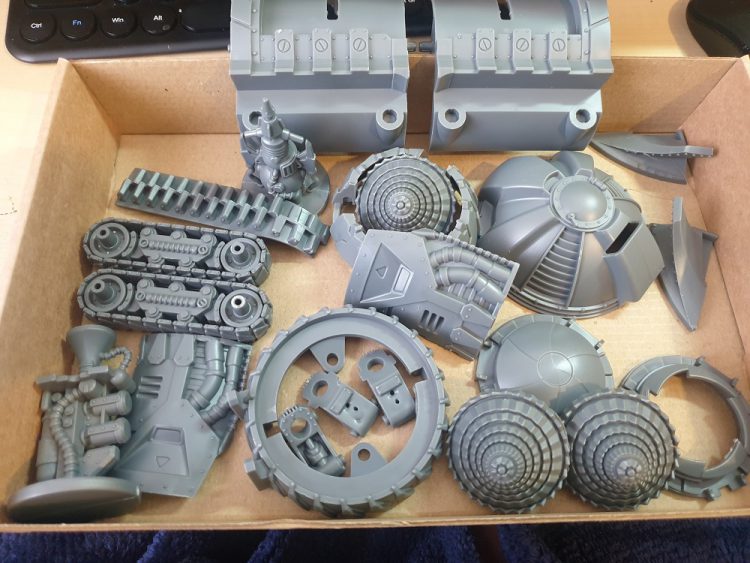 That’s a bit neater. As you can see, there’s not much to it – around 20 mandatory pieces, plus the optional guns if you want to model it like the stock photo. It’s worth noting something here that isn’t noted on the product page – there’s actually 3 different options for side plates and as far as I can tell you just randomly get one of the three sets. The version I have is actually pictured on the product page for the extra compartment option (more on that later) and then I guess there’s a third version? Cool.

The actual build of this thing is very simple, and it goes together pretty neatly – you can dry fit about 90% of it and it more or less stays together, which is helpful because like I said, no instructions. If you have any experience at all of building models this isn’t going to challenge you, so you needn’t worry about that too much. When I was building it I said to a friend that it was basically like building Duplo, and I stand by that comment – and it’s not a criticism.

There was basically nothing to clean up here. It’s sprueless and nicely cast in hard plastic. As well as the side plates, which have alternatives but as above appear to be randomly-packed, there’s a couple of options here – you can assemble the drill “closed” as I have, or “open” like the stock photo, with a couple of different guns to pick from.

I don’t think it’ll surprise anyone if I say that my main purpose for the drill was not, in fact, to play Warpath, but as a replacement for GW’s Terrax-Pattern Assault Drill. In that respect it’s perfect – it’s sized exactly for that purpose and well, it sure looks like a drill. It also doesn’t have obvious 3D print lines on it, so that’s a step up, and it’s 1/3rd of the cost.

And here it is painted!

So what do I think of it overall? As a kit, great. I don’t love the aesthetic of the parts coming loose in a baggie, but whatever. It went together nice and easily. It was pretty straightforward to paint, and there’s enough going on to have some fun with it – and given its intended function, it’s a great target for some weathering. It’s a little bit too toy-like to be truly great – in part that’s Mantic’s aesthetic, but putting it next to GW stuff emphasises the difference in a way which doesn’t favour the drill. That said, you can’t argue with the price, and on its own merits it’s a perfectly fine kit that will excel at the job of “be a big nasty looking drill,” and of course if you wanted an even bigger drill you can buy extra compartments as above – you basically just duplicate the main body section, and I guess you can probably do that infinitely? Cool.