The new additions to the Stormcast range are brimming with releases all vying to be the big new centerpiece model. We’ve got big honkin dragons, Dominion’s own Yndrasta, and a new Chapter Master-level character, Bastian Carthalos. We here at Goonhammer were fortunate enough to be sent a preview copy of this latest named hero, and today I’ll be reviewing the big hammer-totin fella.

In a rare move for a named character, Bastian has multiple build options. They’re subtle but a welcome way to make this guy your own. In addition to helmeted and bare heads, he can either be carrying his hammer casually in one hand or holding it in both. While the helmeted head is extremely cool, his bare head is even better. This is one of the rare times we have a BIPOC person as not only a named character, but a faction leader-level one, so taking advantage of that feels right. It also helps that it’s a damn good sculpt – all around this guy is brimming with well-realized detail and assembling him is a pretty seamless experience.

Said assembly should be nothing new to anyone who’s built a recent GW character model before. There’s lots of little divots for the various pieces to fit into, and once assembled they do a fantastic job of hiding any gaps or joins you may find. Assembly and cleanup took me roughly 45 minutes, and I spent a good chunk of that just hemming and hawing over how he’d hold his hammer. I have a spare hammer and empty gauntleted hand now though, which is nice. I would say there are a few things to watch out for here though:

Otherwise, it’s a straightforward and easy build, as expected from a modern GW character model.

When I first saw this model I was expecting to leave him separate from his base, but after building him I really don’t think that’s necessary. There’s enough space between his basing details and the rest of him that it shouldn’t be hard to get a brush around. His cape also billows out nicely, so getting a brush in there shouldn’t be too difficult either. Now, onto my own experiences painting this Big Hammery Boi.

As for a scheme, I went with my own Stormhost, The Undying Phalanx. I detailed these in my How To Paint Everything: “Greekcast” article, so if you want more detail on the hows and whys of this scheme, that’s where to look.

As for the painting experience, I’m happy to say it was an absolute joy. He’s relatively uncluttered and straightforward for such a heavy hitter (both narratively and on the tabletop) and the big smooth folds of his cloak made painting smooth transitions a breeze. There’s enough detail here to read him as someone important and distinctive, but he’s not laden with the baubles and doodads of so many character models. My only pain point was getting to the back of his lower cloak through his legs, and it likely would have been easier to do so if I painted him separate from his base.

His face is wonderfully stern and expressive, and the detail of his armor frames it nicely. I found the detail in his beard to be a little shallow, hence the stippling. I do wish that beard was a little better defined. While I wasn’t crazy about the big halo around his head when I first saw the model, it grew on me while painting and I couldn’t imagine him without it now. 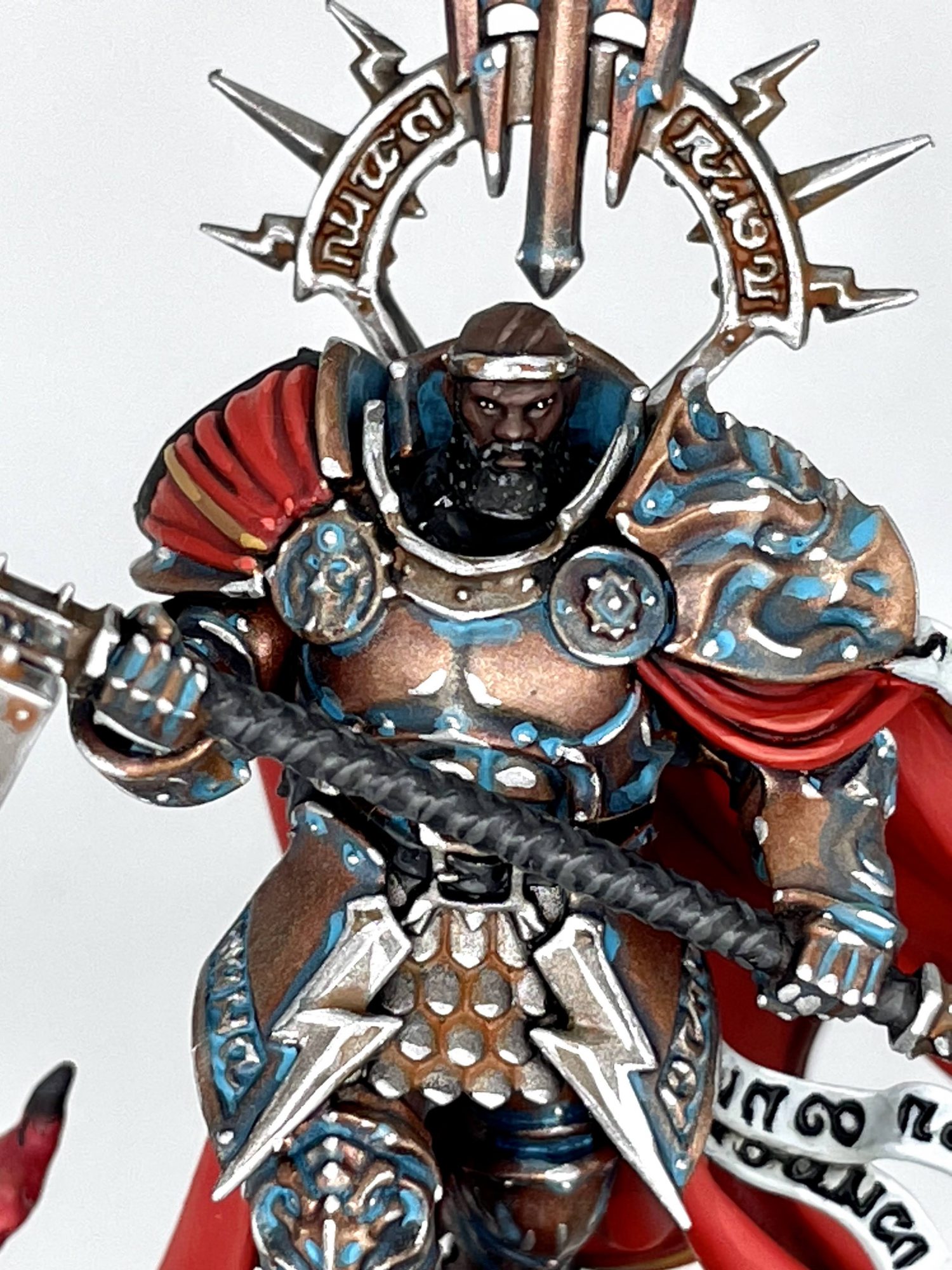 His base tells a story, with him striding through some kind of ruins, and there’s just enough detail to get a feel for it without overshadowing the model. I’m glad this dude isn’t leaping off a hero rock – leave that to the young heroes with something to prove. I painted the basing with my typical white stone recipe as detailed in the aforementioned “Greekcast” article, and had some fun winging it on the flames and doing some wet blending. I think it came out okay, but a light basecoat and Contrast could do alright too. There’s also enough room to add your own basing elements, so I made it as lush as I could. 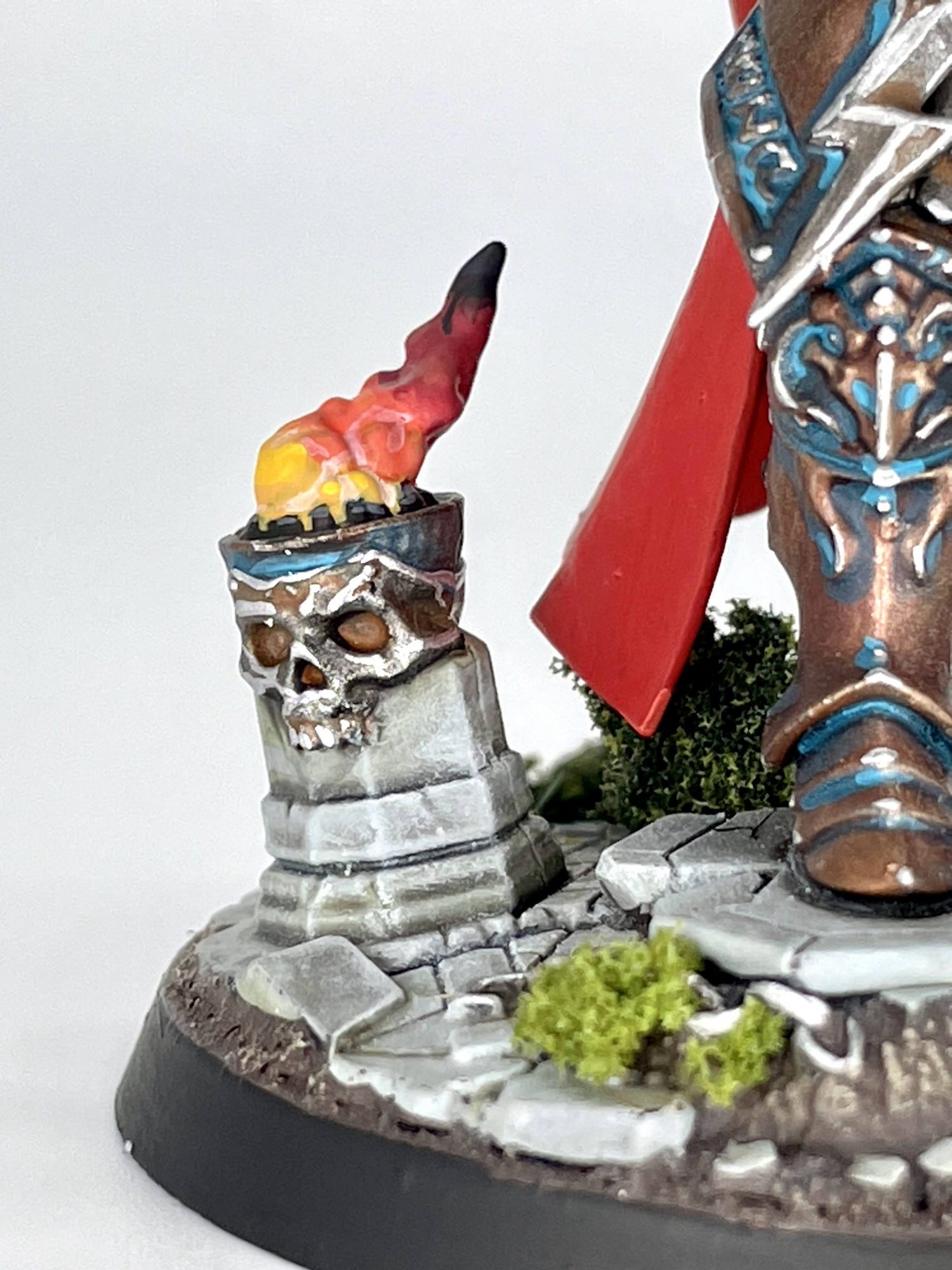 Bastian Carthalos (who I just typoed as Bastian Stormcast) is probably pound-for-pound the most Stormcast per inch of Stormcast you can get. He crystalizes the newer Stormcast aesthetic into an absolute banger of a model, with enough detail to make a wash and drybrush painter happy, but plenty of smooth expanses of cloth for anyone who uses blends, airbrush, or freehand detail. There’s a great mix of details and textures on him and I found him to be a joy at every step from unboxing to placing him, finished, in my display cabinet. While there are a couple minor quibbles – namely a slightly too soft beard and the aforementioned trickiness with assembling the cape – it’s nothing that I would say should steer someone away from this model.