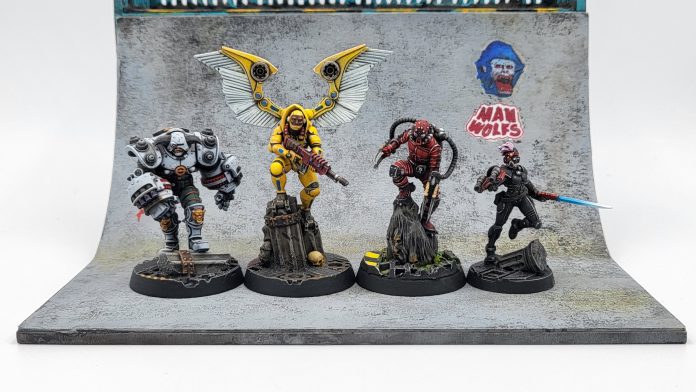 Howdy scummers! While the Necromunday crew is getting excited for the next round of Ash Wastes releases, Fowler is here to show off some uphive denizens.

Ever since the possibility of becoming the club arbitrator was floated past me, I’ve thought about the possibility of Spyrers as agitators in a campaign – not quite the big bads… but definitely there to sow discontent between the gangs while they hunt. Artel W’s Manhunters series has some fantastic proxies that I have painted up as their own “gang”.

So who exactly are Spyrers? They are members of the noble houses, kitted out with impressive gear and hunting hapless denizens of the underhive. In short, the coddled youths of the houses are given their murder-suits and told not to come back until they have sufficiently participated in The Most Dangerous Game. These were uniquely powerful killing machines in the original edition of Necro – something that may be hard to translate to the modern game without giving them truly cheesy rules. In my campaign I used the homebrew spyrer rules from Killershrike.com, which were pretty great. Obviously the proliferation of web, melta, and countless other powerful weapons meant that any Spyrer caught out in suboptimal positioning was nuked from orbit.

For the Malcadon, my aim was “Deadpool with sword arms”. His… villain rock would have seemed a bit odd for a standard Necro base, so I improvised! I made a base topper from a pressmold of Sector Mechanicus terrain and cut a hole in the center for the rock to jut out through. The bodysuit’s main color is Mephiston Red, calling back to one of the catalog schemes. Like the rest of his buds I opted to keep the scheme nice and uncomplicated – panel liner and silver edge highlights on armor did a lot of heavy lifting here. The Malcadon is the sneaky backstabber of the bunch, and I wanted to give him suitably menacing vibes.

My Yeld is an homage to Primaris Kevin’s Murder Hornets, largely following his paint scheme. This hunting rig pattern is meant for aerial mobility and sniping, with fearsome claws if close combat is required. The Yeld pattern has a modern Necro analogue in Friekstorn Strix – a Van Saar exile who appears to have cobbled together a suspiciously similar loadout!

The Jakara’s paint scheme is much simpler. Zenithal prime, drybrush of white, Black Templar contrast, a few touches of gray, wash with Nuln Oil and hit it with some silver line highlights and she was mostly painted up! While the classic Jakara schemes were much more colorful, I wanted her to look much more like an Imperial Assassin. While many of the Spyrers have fearsome melee capabilities, the Jakara is the no-frills combat specialist of the bunch. No sneaking, tankiness, or flight… she just meets opponents head on.

For everyone’s favorite punch boy with bolter gauntlets, I decided to work from the base color of my zenithal prime, again leaning on enamel panel liner to add definition. This scheme is another homage to one of the catalog models. The undersuit is Sons of Horus Green, and the tubing is Fire Dragon Bright. While the Orrus is a a slower and beefier hunter, it’s made up for with a pair of rather menaching-looking bolter gauntlets.

Even the beefiest of fighters is likely to have problems with an Ogryn leader charging in with a lascutter. That said – there was success giving teams access to a single Spyrer as an underdog mechanic as well. You can look forward to a future article in which the crew discusses ways to create “boss fights” with significantly stronger fighters!

And that’s all we’ve got for today! We’ll be back with more Ash Wastes review context very soon! As always, drop us a line at Necromunday@Goonhammer.com with any questions or suggestions.