Necromunday: How to get the Most out of Articles of Faith

Welcome back Pilgrims! As a bit of a companion piece to our House Cawdor guide, today we’ll be looking at how to best use House Cawdor’s special rule: Articles of Faith. We’ve mentioned how much we like this set of rules before, so let’s take a deeper look at what they do and how to use them!

I’ve been having kind of a thing with Cawdor lately. House of Faith has turbocharged their rules to a really impressive degree, and they’re quickly turning into one of the most fun and powerful gangs in the game. Like everyone else, they’ve got their own set of gang-specific special rules, and in this case, they’re called Articles of Faith and reader, they’re an absolute doozy. So much, in fact, that I’m writing an entire article about them!

The most important thing about them is that they’re entirely free. Every other gang (with the exception of House Orlock, but their special rules are so weak it doesn’t really matter) has to pay to use their rules. Goliath gene-smithing and Delaque psychometric whispers add credits to the cost of the fighters, Escher chem alchemy is really rather pricey, and Van Saar cyberteknika is both expensive and predicated on Lasting Injuries.

How Articles of Faith are Used

Articles of Faith are heroic and miraculous feats that Cawdor fighters can perform during battle. To do so, the player has to take a threshold test using faith dice. Each Article of Faith has a specific number that has to be equalled or beat by rolling any number of faith dice. It’s up to the player to decide how many faith dice to roll, but more on that in a moment. A fighter can attempt to perform an Article of Faith at the beginning of their activation and must carry out the instructions as written in the Article’s description.

A quick note: both Cawdor and Redemptionist fighters can generate faith dice and perform Articles of Faith, but in the interest of brevity, I’ll be referring to both as “Cawdor fighters”.

First, it’s important to talk about how faith dice are generated. In the End Phase of each turn, the Cawdor player rolls a dice for each non-seriously injured Cawdor fighter they have currently on the table, and on a 5+, that dice can be moved to the faith dice pool, where it can be used to roll for threshold tests to perform Articles of Faith. Right off the bat, we can infer two things from these rules:

If you’re planning on performing a lot of miracles out there, then it might behoove you to keep your fighters safe for the first turn. As always, smoke grenades and line-of-sight blocking terrain are your friends!

If a fighter isn’t going to be an important part of your game plan this turn, they can perform a Beseech the God-Emperor (double) action. If they do, they stand around praying, but you roll 3 dice for this fighter when generating faith dice in the following End Phase. Finally, faith dice carry over between turns, but if the number of faith dice exceeds the number of friendly Cawdor fighters on the battlefield, you must discard them until the numbers match up.

My totally arbitrary threshold for what a “good” chance of success is 70-80%, so whatever is around that, I’ll probably recommend that number of dice.

So, when making your decision to roll however many dice for your Articles of Faith, you now can reference (or memorize) this handy little chart and not waste your faith dice. Let’s move along and talk about the powers themselves! 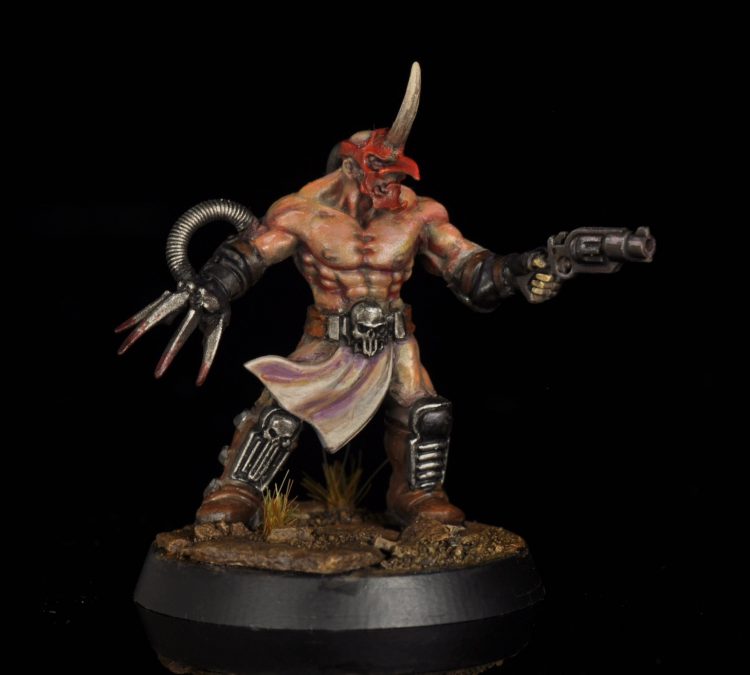 The Paths of Faith

One of the questions I’ve been getting is, “what’s the best Path of Faith for my gang to follow?” The answer is, honestly, whatever path fits your gang’s story best! They’re all good, so you can’t really go wrong! There are four described paths and one do-it-yourself path. Each of the four pre-made paths comes with 6 articles of faith and a bonus condition that allows for extra faith dice. For the DIY path, the player picks 4 powers and does not gain any way to generate bonus faith dice. While a player can certainly cherry-pick the best 4 powers, losing the bonus to faith dice generation is pretty rough. Let’s get to the paths!

Path of the Faithful

Our first path represents what the majority of house Cawdor believes. In game terms, most of the articles here are defensive or buffs, though there is a nice one to remove an enemy’s ready marker. For each article of faith, I’ll have the name followed by it’s threshold cost in parentheses, and then a little blurb about what it does and when I think it’s best to use.

Faith dice bonus: Path of the Faithful Leaders and Champions roll an extra dice each to generate faith points, making them even more valuable.

Path of the Fanatic

Faith dice bonus: Friendly House Cawdor fighters who are Engaged roll an extra d6 to generate Faith dice. Combat rarely lasts more than one round, so this bonus might not factor in that much in game terms, but it’s certainly a nice-to-have.

Path of the Doomed

Faith dice bonus: If the gang’s Leader is Seriously Injured or has been taken Out of Action, or the gang has failed a bottle test, faith dice are generated on a 4+ rather than a 5+. Not the best bonus, but a lot of times, victory can be snatched from the jaws of defeat in that weird part of the game where both teams have failed their bottle rolls.

Path of the Redeemer

The Path of the Redeemer is all about buffing your characters and disrupting the opponent’s actions. Players with a tendency towards kitted-out Cawdor fighters will love this path, as it can help their fighters become extremely dangerous.

Faith dice bonus: The player can roll a dice for each enemy that became Seriously Injured or went Out of Action that round.

Articles of Faith is easily the most fun, flavorful, and, arguably, effective gang special rule we’ve seen so far. Hopefully, with this little guide you’ll have an easier time using these cool new powers in game. Don’t be scared to have more than a few fighters spend their first turn praying to bank up a bunch of faith dice to use at pivotal moments. They’ll carry over, and you might need to perform a miracle or two later in the game to win it!

Have fun with these new rules, Pilgrims! If you have any suggestions on what you want to see from us in the future, or want to show us your sick-ass setup, drop us a line over at contact@necromunday.com. We’d love to hear from you. Walk in His Divine Light, Pilgrims! Or else…