No Gods, No Minions. Fight for Glory in Kleos – Turn Order 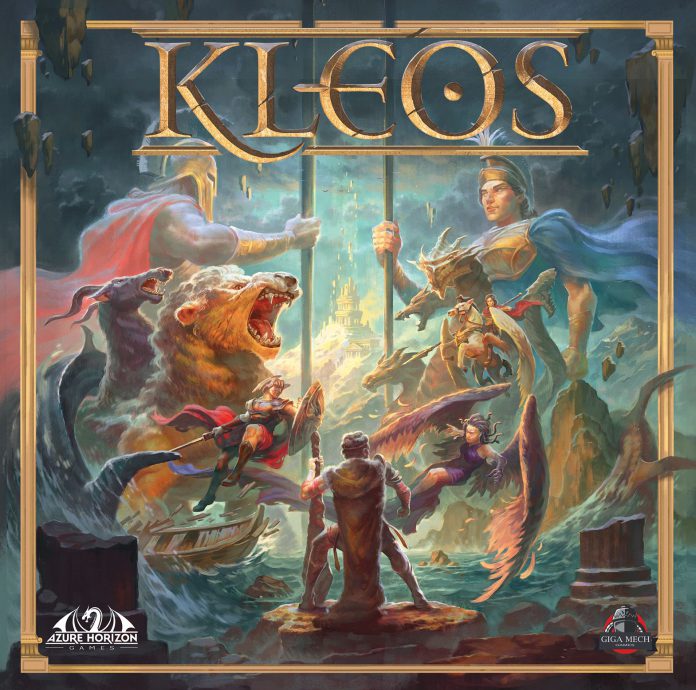 Kleos is a welterweight area control game set in the era of Greek myths. This is a genre flush with so many titles that it has its own pantheon of great classics. Blood Rage, Cyclades, Small World and so many more have hit our tables for over a decade that you’d be forgiven for overlooking newer titles that slip under the radar. Kleos may be worth a closer look, however.

What makes Kleos click is the way that it strips the genre down to its basics. You’re a Greek God, which is awesome, and you recruit Champions and minions to fight for glory in your name, which is also awesome. You send your minions to battle and control area for points but there are very few scoring hexes. There’s room enough in the isles for 5 players but only 4 hexes score Glory. This means that fighting is funneled quickly and deliberately into a focused zone.

The most important hex on the board is the Port. Its surrounding hexes (Market, Arena, Theater) each score a point for its controller at the end of the round however the Port scores 2. It’s also the gateway to the Greek Isles; these are where you go to recruit Epic heroes of myth and legend to your side. There’s no balance here. If you control the Port for the whole game you’re going to have better minions and more points. It is the key to victory.

Accordingly, everyone is going to fight over it. Each player plays one of 5 Greek Gods each with a completely unique asymmetrical deck. Ares, bloodthirsty God of War, is known for direct assault and is one of the most beginner friendly Gods. Your minions are powerful, your Act of God cards make them fight better, and you do best when you get stuck in and let the blood flow.

Dionysus, however, plays a different game. His minions don’t just fight, they also litter the board and opponent’s pieces with Wine Tokens. Everyone’s favorite God of Frivolity ensures the party is flowing and those Wine Tokens can be used for good or ill. On your own minions they give you a bonus; hooray alcohol! On opponent’s however, they’ll hurt their abilities and even leave them with the dreaded Hangover curse.

Athena, Hermes, and Artemis round out the Gods and all have been given a unique feel with a close attention to detail. The bulk of your forces will be made up of “generic” cards from a common pool but your unique Divine Deck provides enough seasoning to give each God their own tactics and feel.

I mentioned a stripped down feel, and I think it’s Kleos’ biggest selling point. The bulk of scoring comes from fighting and controlling a small area, so you’ll do a lot of fighting in this small area. Tactics have a strong impact—blocking reinforcements by gumming up the normal hexes emerges as good play—but this is a game that knows what it’s about and gets there quickly.

The rulebook has the usual bumps I associate with Kickstarter and new publishers in particular (do Godly minions roll Godly dice? I’m pretty sure but for the life of me I can’t find it anywhere) but once you get going it’s a game that’s remarkably easy to teach and start playing. Unlike Blood Rage’s draft or Kemet’s tech tree, there is nothing conceptually difficult to wrap your head around.

There’s also something fun about seeing myths come to life. I wore the spine out of my copy of D’Aulaires’ Book of Greek Myths as a kid and everyone you’d expect to see (and a few you might not) make an appearance. Pegasus is here; you can play the winged horse as a minion in its own right or attach it to another minion as a Heroic Mount.

Unfortunately, a broad cast of characters comes with its own problem. I appreciate that Kleos did not give in to the Kickstarter trope of producing a bespoke miniature for every card, token, and character but the use of generic numbered meeples makes understanding the board state a challenge.

Each player has a player board that they play their cards to. Minions, Epic and normal, are represented by cards and all of the upgrades, boons, and curses are cards too. These are played to the player board as well. Each of the board’s 5 slots has a corresponding numbered meeple but the stacks of cards make it nearly impossible to see who is what at a quick glance.

This is especially an issue once you get into the late rounds and everyone has had Meeple #3 die and come back as different minions two or three times. There is no limit to the number of combatants in a space and ally minions can assist in combat. They’ve all got different combat strengths and add different support values so the otherwise brisk gameplay often comes grinding to a halt as you ask multiple opponents what their total strengths are. The totals change depending on which minion you target, as minions can have different combat attributes and support attributes, so there is a bit of slow arithmetic from time to time.

That is my only gripe, however. Tactics flow and change with different Gods in play and the large pool of Epic minions ensure no game is exactly the same. Zeus makes an appearance as well, granting his dynamic and overwhelming boons to any player 5 points behind the leader. The Greek gods were known to be capricious so this fits very well

I’m happy to recommend Kleos. The generic theme is not going to help it stand out amidst such a crowded and deep genre, but in an industry where trends often push for more of everything (mechanisms, miniatures, etc) it’s refreshing to play a title that gets to the essence of what makes Dudes on a Map Area Control so fun in the first place.

A copy of Kleos was provided by the publisher for the purposes of this review.