Psychic Awakening – War of the Spider Review: The Lore 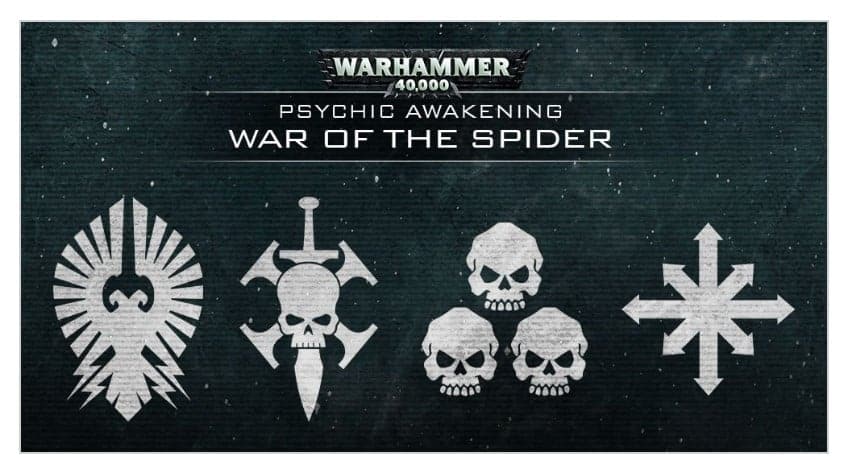 If you’ve been following along with all of our Psychic Awakening Lore Reviews you’ll know that this part of the review is where I describe all the weird stuff that the explosion of warp energy is doing to psykers. In War of the Spider, we don’t get as much of that. I guess the uncontrolled ravages of warp stuff has got nothing on the careful machinations of Fabius Bile. What we don’t get in psychic manifestations we do get in twisted, modified, chaos marines.

War of the Spider details the pivotal battles between Fabius Bile together with the Fallen Brazen Drakes (now the Shriven) against the Death Guard, while a wayward Torchbearer Fleet harries them both. Fabius Bile emerges from his lair in the Eye of Terror to begin executing his latest scheme. We get no details, but learn that step one involves stealing the Ark Cornucontagious. It’s a holy relic that is as putrid as it is difficult to spell. Unwilling to take this offense laying down, Typhus himself mobilizes his forces to recapture the relic. 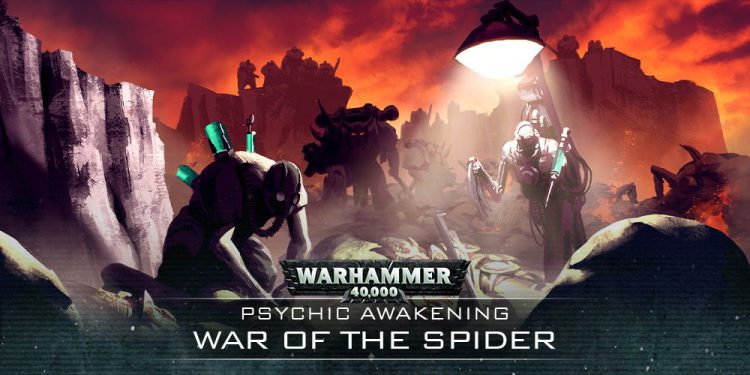 Our story begins with the turning of the Brazen Drakes to chaos. This is captured in a poignant short story posted on Warhammer Community in the lead up to the books release. As a Torchbearer Fleet arrives at Khassedur to deliver Greyshields to the Brazen Drakes the fleet discovers that the world is torn by war and the Chapter Master of the Drakes Argento Corian had turned Renegade. The Greyshields – despite never even having met their Renegade brothers – are immediately declared traitors and eliminated by the Custodes and other Imperial Agents in the fleet.

Corian and his fighters, now known as the Shriven, escape to the Cadian gate and set up a new stronghold. There they meet Fabius Bile who sees the Shriven as useful (and disposable) allies. In exchange for the gift of modification, Corian agrees to help Bile fight the Death Guard. They certainly gain strength and useful gifts, but Bile quickly makes Corian and the Shriven dependent on his medicinal cocktails. With ease, Bile gains control of the Shriven.

The initial battle occurs on Limaxis, where Typhus falls into a trap set by Bile. Nothing particularly exciting happens on this planet; it’s primarily a setting for Death Guard units and troops to get some highlight and the writers to shake out a thesaurus’ worth of words that mean “guts” or “gross.

The follow up occurs on Bairsten and quite a bit more interesting. Following their victory on Limaxis, the Shriven sign up in even greater numbers for Bile’s gifts. Fearing that he is losing control of his warband, Corian declares that his forces will head directly at the Torchbearer fleet that has emerged into the system. Corian swears revenge on Shield-Captain Tyvar for the executions he carried out over Khassedur.

Again we get a few pages of bolters and blood as the Shriven and Custodes exchange bullets and bodies. As is fairly typical in these books, one force looks to be doing well until something happens and the other does well, at which point something else happens and we agree to call it a draw. In this one we go back and forth between the Shriven and the Imperial forces until an Assassins bullet blows the back of Corian’s skull out and the Officio Assasinorum reveals its presence. He’s not dead yet, and the Shriven categorize the damage a flesh wound and drag his body back in an orderly retreat. Most importantly, however, is the Spider. Bile manages to capture and escape with multiple Custodes and Sisters of Silence. What he is capable of doing with such a rich treasure is unknown…

The final battle sees all the forces of War of the Spider together on the Shriven’s fortress world of Dessah. Bile and Typhus face off directly at one point, before Tyvar crashes the party. Bile escapes, and Typhus makes his own retreat when he realizes he’s outnumbered. The Shriven continue their onslaught, emboldened by the return of their Chapter Master. Corian is risen Frankenstein-like by Bile and augmented with numerous mutations and psychic abilities. The fighting is fierce and both sides lose forces.

The battle is brought to an end by all 4 assassins. In turn, each unit takes a swing at Corian before he is finally brought down. Without their Master, the Shriven lose coherency and are pushed back never to regain a foothold. The Death Guard retreat in disgust and in a disgusting manner, and the Imperial Forces regroup under Tyvar. They head home, their new mission to ensure that Terra hears of everything that happened.

Honestly, my favorite bit from War of the Spider is the Warhammer Community short story I linked. The Dungeons & Dragons community is currently grappling with the issues that surround force alignment-races, and the Imperium serves as a (fictional) example of the problems with that lens on the world. The Brazen Drake Greyshields are new Primaris created from genestock, and yet they’re summarily declared traitors and executed without even given the opportunity to prove themselves—an opportunity they literally beg for as they die.

In that short story we see the genocidal brutality carried out by the Imperium upon it’s own citizens—even Space Marines!—who have committed no sin other than sharing blood and DNA with heretics. The Imperium is not “good” but they’re typically framed as “the good guys” in codexes and rule books. This sort of story, one that puts its own evilness on full display, is good to see accompanying this book. I just wish it was, you know, in this book.