Games Workshop released a lot of interesting tidbits about 9th Edition this week which we’ve helpfully summarized in our 9th Edition Weekly Round-up. One significant change is to morale and the new combat attrition mechanic. This week we’ll look at the math behind this new mechanic and compare it to what we’re familiar with.

In 8th Edition Morale and Leadership weren’t really considered major components of the game. Abilities or effects that modified a unit’s Leadership characteristic were regarded as useless, and morale felt like it had a binary effect where it either did nothing or would wipe out entire squads. The Morale mechanic was fairly simple; if a unit took casualties then during the Morale phase the player rolled 1d6 and added the number of models slain that turn. For every point the result exceeded the Leadership characteristic of the unit a model was removed to represent it fleeing the battlefield. This meant that the number of casualties inflicted was vastly more important than the die roll or the Leadership characteristic of the unit as the number of models slain directly drove the probability of success as well as the outcome. In 9th Edition things have changed significantly. The new rules are reprinted below from the Warhammer Community site.

This results in several changes:

Games Workshop has said that the goal here is to make morale a much more significant part of the game, and in Stu Black’s words the Morale phase has been ‘updated and improved’. Now a MAJOR caveat here is that we are working with incomplete information and it’s entirely possible that there are major elements that will dramatically change our understanding and perception of the rules. But this is the Internet and rampant speculation with partial information is a core part of the online experience. Our interpretation of the rules is that the lost model from a failed Morale test occurs before Combat Attrition tests and therefore that lost model can put the unit below Half-strength.

To work this out I put together an AnyDice script which allows you to compare the results of any combination of Leadership, casualties inflicted, and unit size. It quickly becomes apparent that the presence of three variables (Leadership characteristic, casualties taken, and unit size) requires some constraint to make the analysis viable. The easiest way to do this is to look at the expected value for total models lost for a fixed Leadership characteristic over a range of unit sizes and casualties inflicted. The charts below show the expected number of total models lost after the Morale phase in various editions for a unit with a Leadership characteristic of 6. For example, after the unit loses 9 models the Morale Phase is expected to cause another 6.5 models to flee in 8th Edition for a total of 15.5 (assuming the unit has more than 15 models). 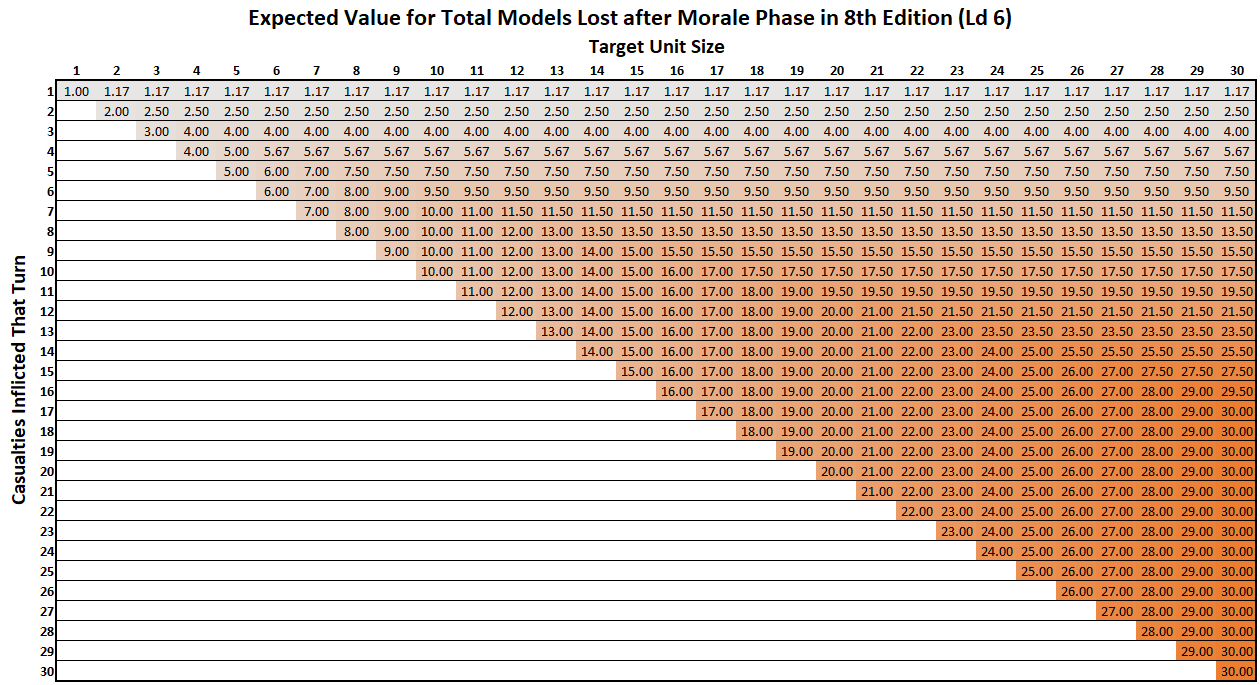 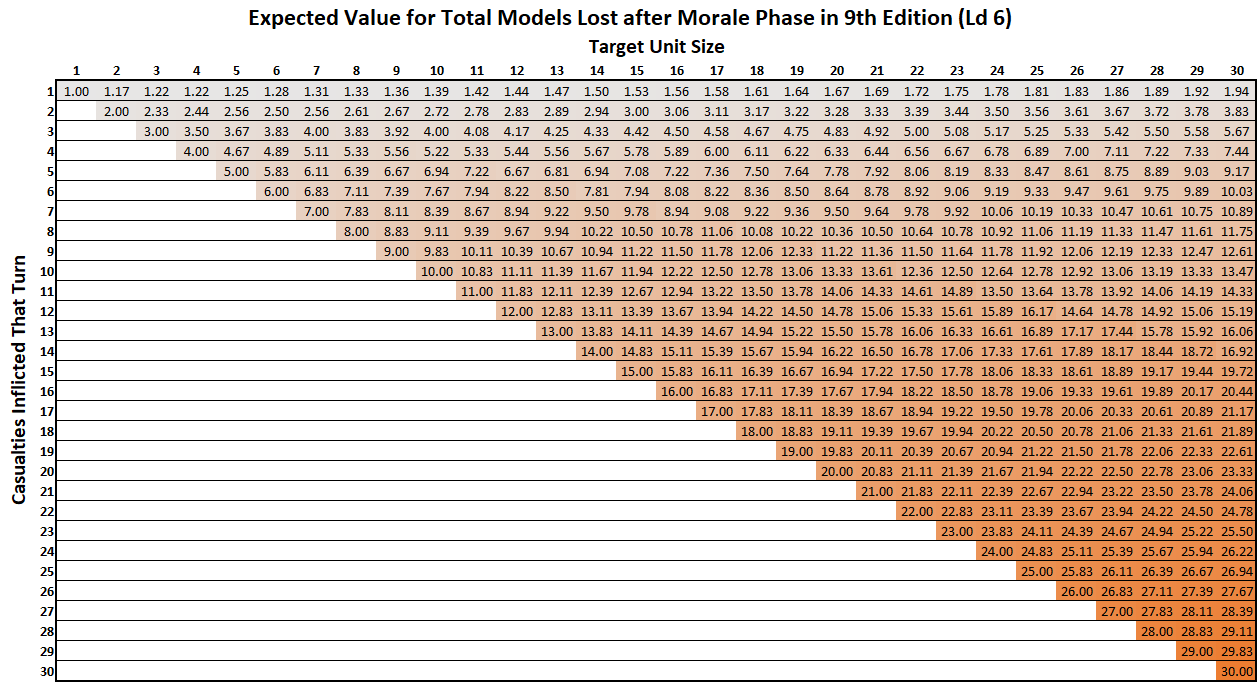 That’s a lot of information to parse through, but if we do a cell by cell comparison we can see how the expected values will change. The chart below shows the delta in the expected value of total models lost after the Morale phase between 9th and 8th Edition. Cells shaded in blue indicate that the expected value in 9th is less than in 8th (meaning units are safer), while orange cells indicate more casualties will occur in 9th. 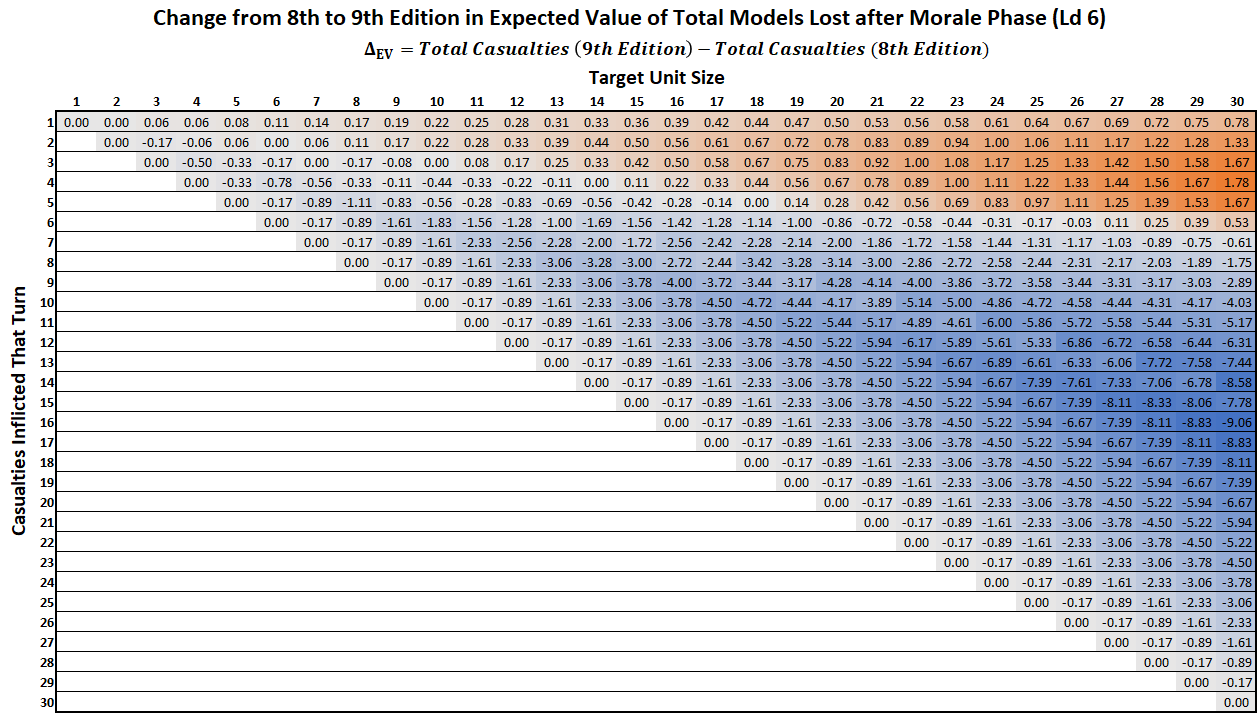 There are two major trends within the change. The first is that in scenarios where units take a small number of casualties (just enough to fail the Morale test) Combat Attrition will cause more models to flee when compared to 8th. This makes sense since after a Morale test is failed every model has a chance to run away. The second trend is that the Morale phase will no longer be a reliable way to finish off units that have taken a massive number of casualties, particularly in the sweet spot where the Morale test was guaranteed to fail. What at first looked to be yet another hit to large units actually seems to be a boon. Previously attackers could safely ignore a large unit after they had taken taken sufficient casualties to ensure they would be wiped out in the Morale phase. Now that’s not guaranteed to happen and larger units will be more resilient.

Both 8th and 9th Edition use Leadership as a gateway to determine if any units are lost. The difference is in the magnitude of the effect. In 8th Edition a penalty to Leadership was equivalent to removing another casualty, while in 9th Edition the penalty only increases the chance of success by a single value (and will never prevent an unmodified roll of 1 from being a pass). We can see the effect of Leadership by looking at the expected value delta charts for Leadership characteristics of 7 and 8 below. 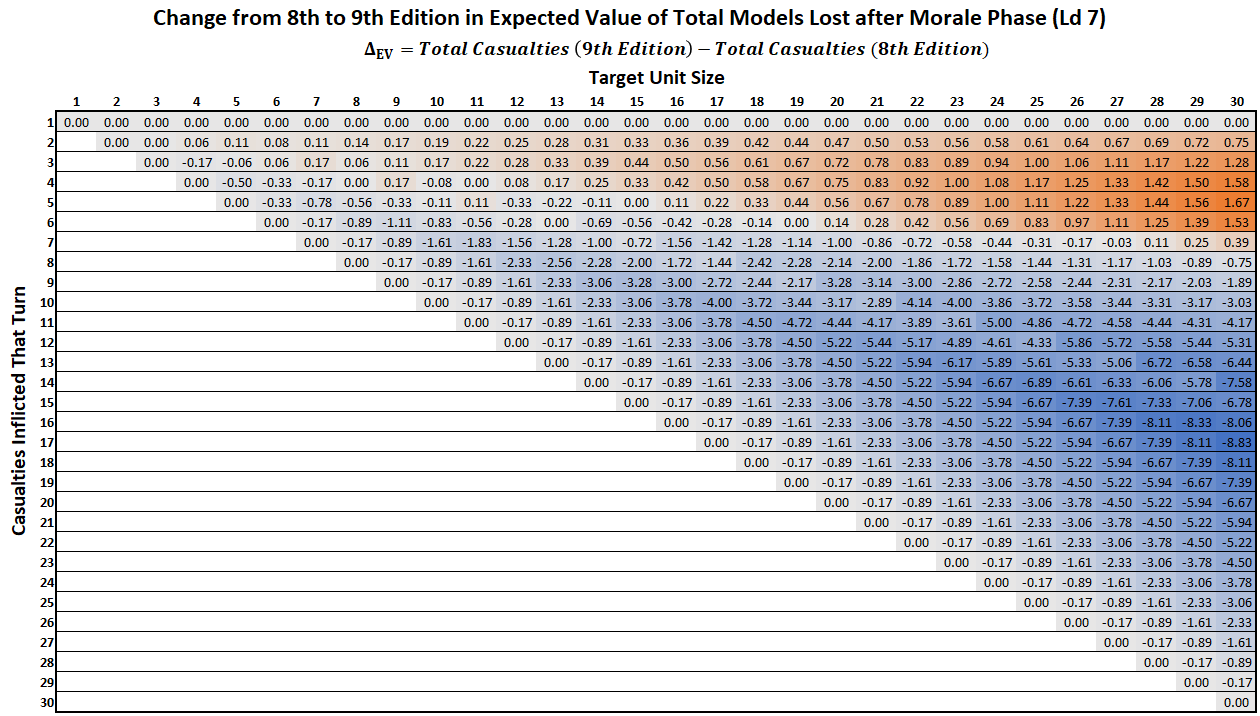 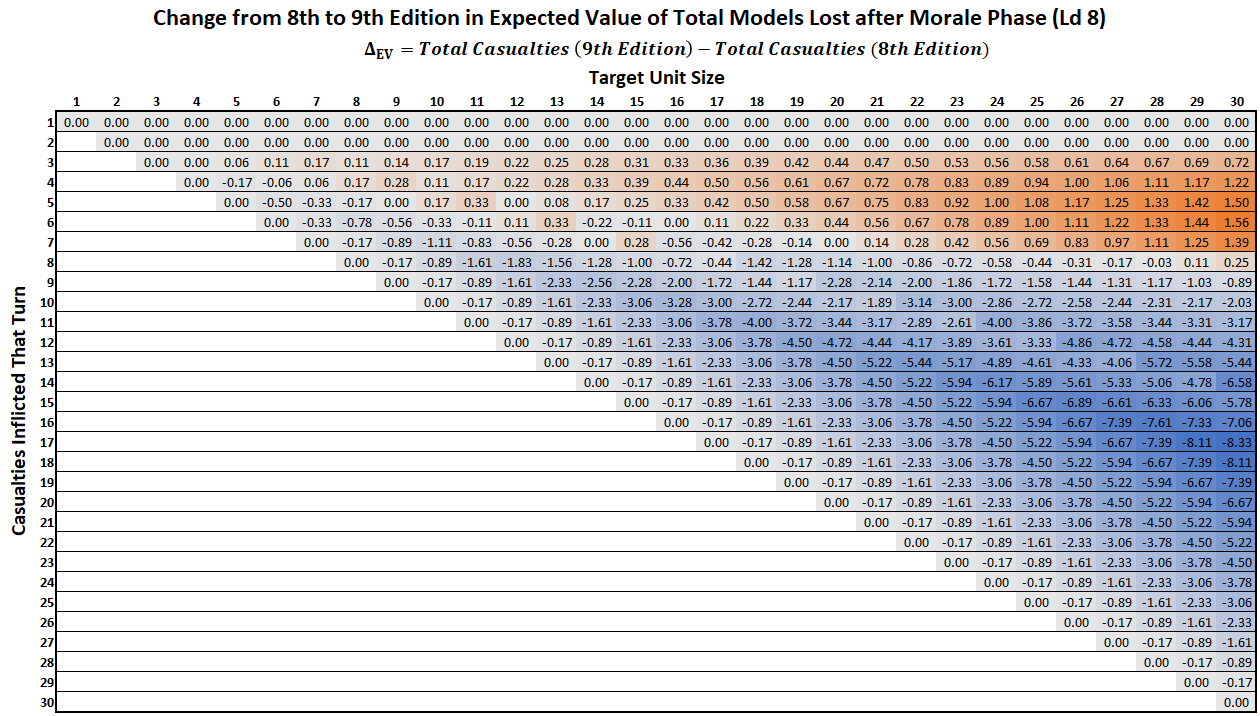 As Leadership improves there exists regions where dealing a low number of casualties will not result in further casualties. This is true for both 8th and 9th Edition, and unless GW hasn’t revealed something critical it appears that the magnitude of the effect of Leadership modifiers is actually reduced in 9th. In a vacuum this seems to be less than ideal. It’s difficult to justify allocating points or resources to using a power or ability to reduce Leadership when killing an additional model has the same effect.

In one of the Warhammer Community 40K Daily episodes on Twitch Stu Black mentioned that the presence of a Combat Attrition roll would also mean that the Studio has an opportunity to use modifiers to that roll as another lever to play with. We don’t know exactly what that means, but as a thought exercise I decided to look at how much adding a -1 modifier to the Combat Attrition roll would change the expected value of total models lost. Note that this chart is completely theoretical and assumes that modifiers to Combat Attrition rolls can stack (meaning a unit below Half-strength and affected by a theoretical -1 modifier would lose a model on a 3 or less). 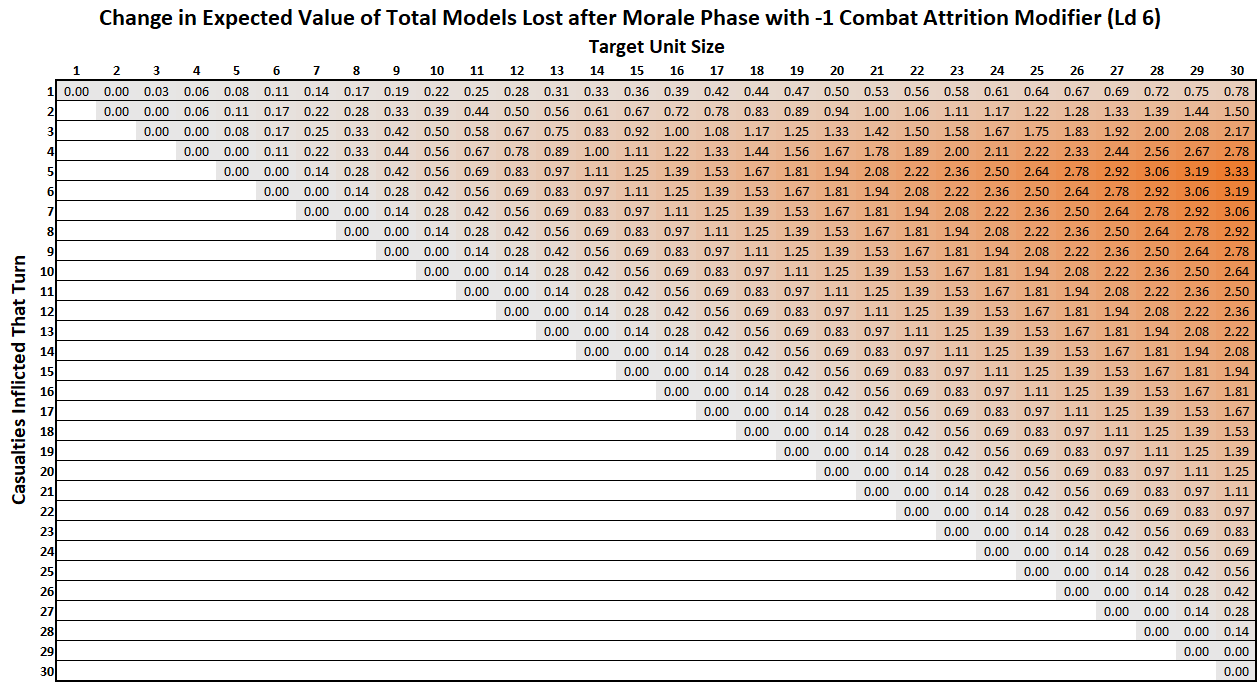 The effect of Combat Attrition modifiers is particularly profound against larger unit sizes when the number of casualties inflicted is relatively small (but enough to reliably cause the Morale test to fail), but it’s universally applicable in comparison to the relative utility of a Leadership penalty.

With 9th Edition around the corner it’s pretty exciting to see all of the potential changes and their impact on the game. The information is summarized below. Again I must emphasize that this is all with the giant caveat that this analysis is only based on the information that Games Workshop has provided, and that something we don’t know could easily change everything.