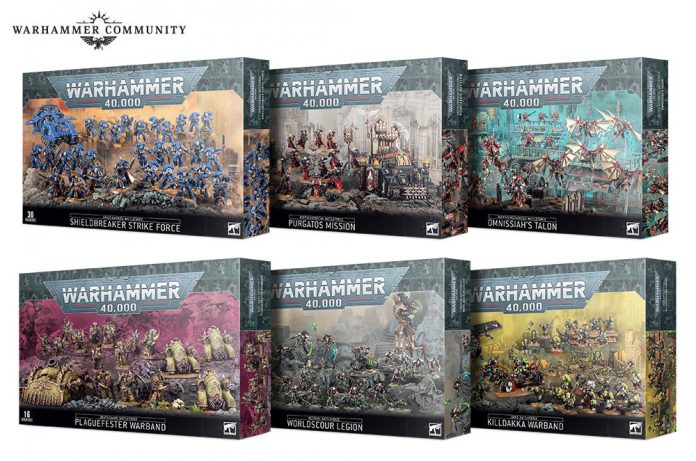 It’s Christmas again and that means a whole new set of Battleforce boxes from Games Workshop. And like we do every year, we’re going through the offerings and talking about which ones are a great deal and which ones are… not so great a deal. For this article, we’re working off the MSRP costs of each box where we’ve seen listed prices – 130 GBP and $210 USD. 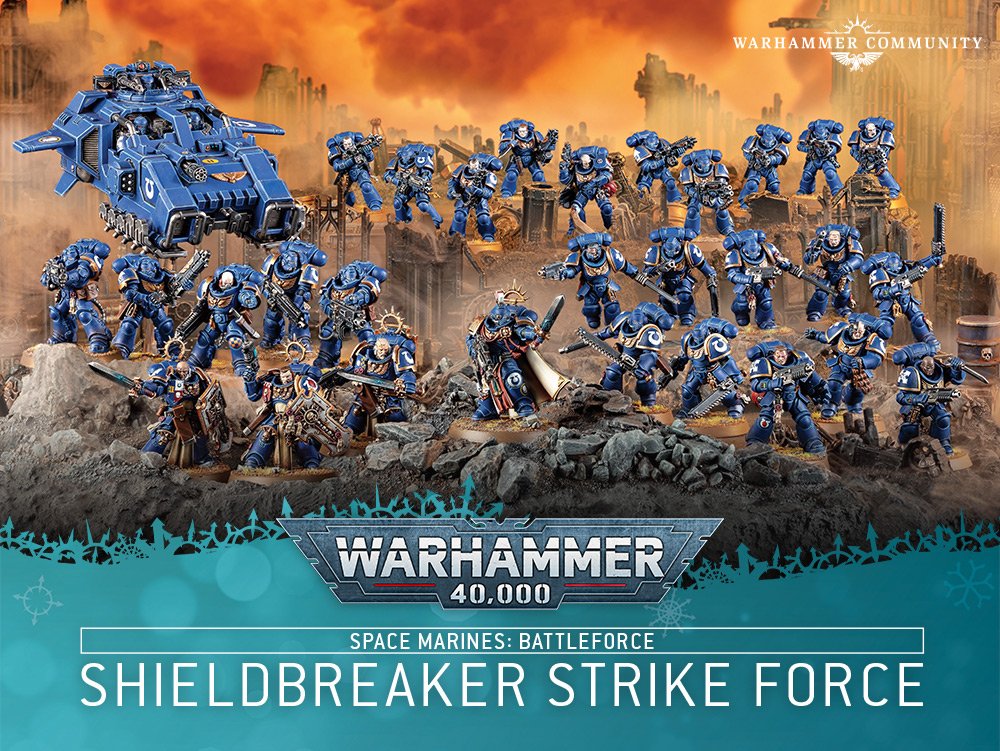 Do you like Intercessors? Good, then this box is for you. 25 of the 29 models in this battleforce are some flavor of Intercessor, whether your preference be assault, chunky, or vanilla. Rounding out the box are three Bladeguard Veterans, the least interesting Primaris Captain, and a Storm Speeder for folks who are curious about how long a T6 flyer with no invulnerable save will survive. The box is okay. Not great, not terrible. Existing Space Marine players likely already have more than enough Intercessors, but it’s a perfectly legitimate Patrol for the Astartes curious. At least for me it would have been more appealing had the box gone all-in on being a big boy heavy force, perhaps with Eradicators, more Heavy Intercessors, and the original boltstorm gauntlet Gravis Captain. As it stands I recommend looking instead at the various Combat Patrol boxes, which are close to the same value and contain much more interesting units. 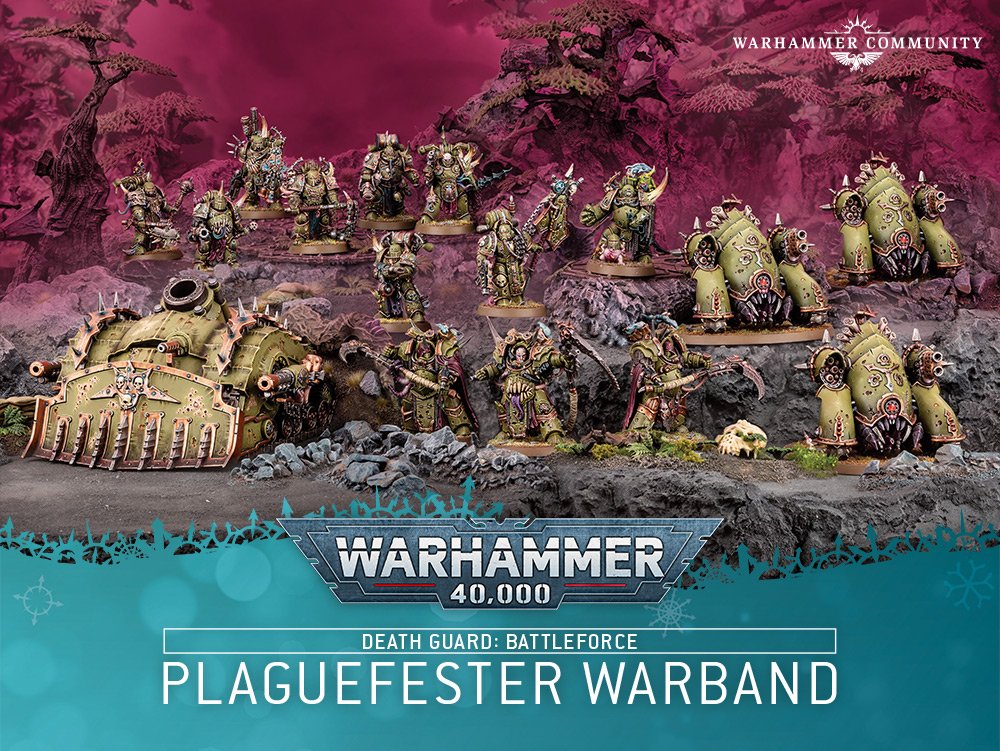 The Death Guard battleforce does a very good job of essentially getting you a good collection of some of the army’s best units, while also packaging the exact units you’ll often want more of in a list. There’s no Typhus here; instead the Blight-haulers are a great value and most armies that run them want 3-6 anyways, while Deathshrouds frequently show up in groups of 6-15 in competitive armies and Plagueburst Crawlers likewise show up in multiples. As troops go Plague Marines are perfectly playable and have a ton of great options – the standard 7-model box is a great kit. The two “odd men out” here are the icon bearer and the plague champion, but the good news is they can be easily worked into the Plague Marines as additional bodies and the icon – while not played often – is OK. Even if you take out the $60 they cost retail, the box still gives you savings over the rest. If you were starting a Death Guard army, this is a great starting point. 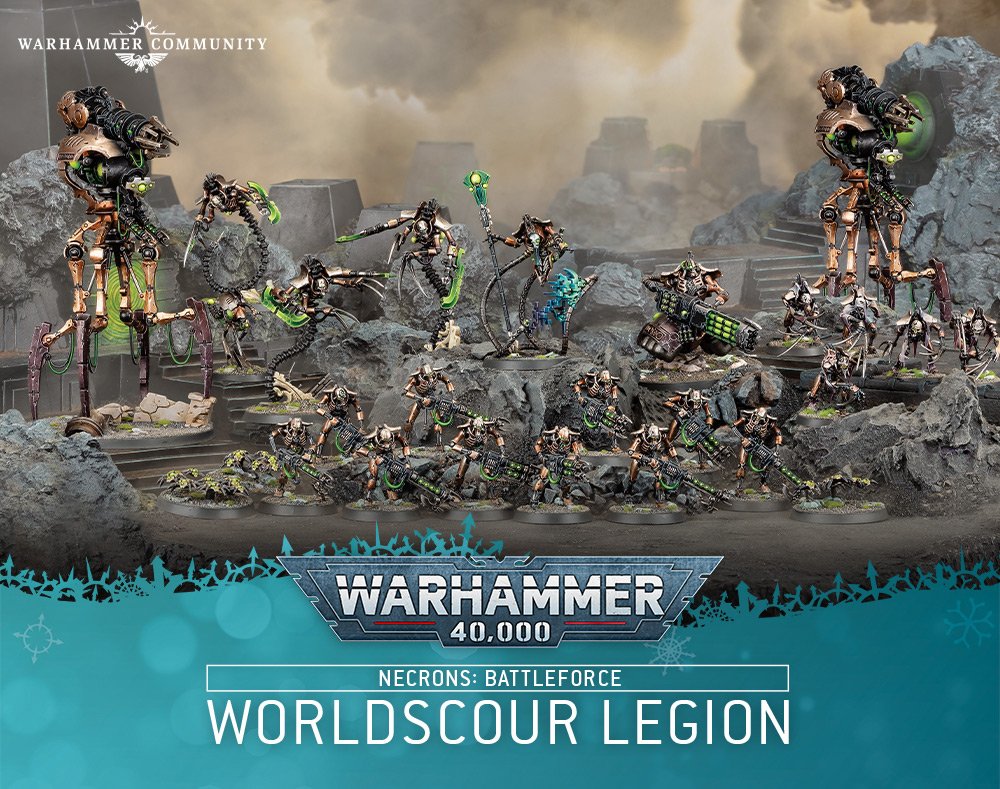 For strictly competitive play this isn’t currently ideal, mostly because it’s gone big on Doomstalkers who are close to good enough (and did actually show up in a successful list recently, albeit at 1750pts) but not quite there, and Ophydians are still super squishy for their cost. The rest of the stuff is pretty decent though – I’m partial to the Psychomancer and think they’re generally underrated, everyone wants some Warriors, Heavy Lokhusts are decent and Flayed Ones are great Action mooks. For tourney players, you’re basically rolling the dice on whether Doomstalkers have a price cut coming – even 10pts off probably makes them Actually Good, at which point you’re getting the Ophydians and more for free, so it’s a strong buy. For casual players this is already decent – Doomstalkers are perfectlyfunctional in that environment, and you’d need to add minimal stuff to this to build an army that was perfectly playable on the tabletop. In fact, combo it with the Necron half of the Elite or Command Edition starter and you’ve got just over 1000pts of stuff that would be a very respectable force in 1000pts Crusade games. 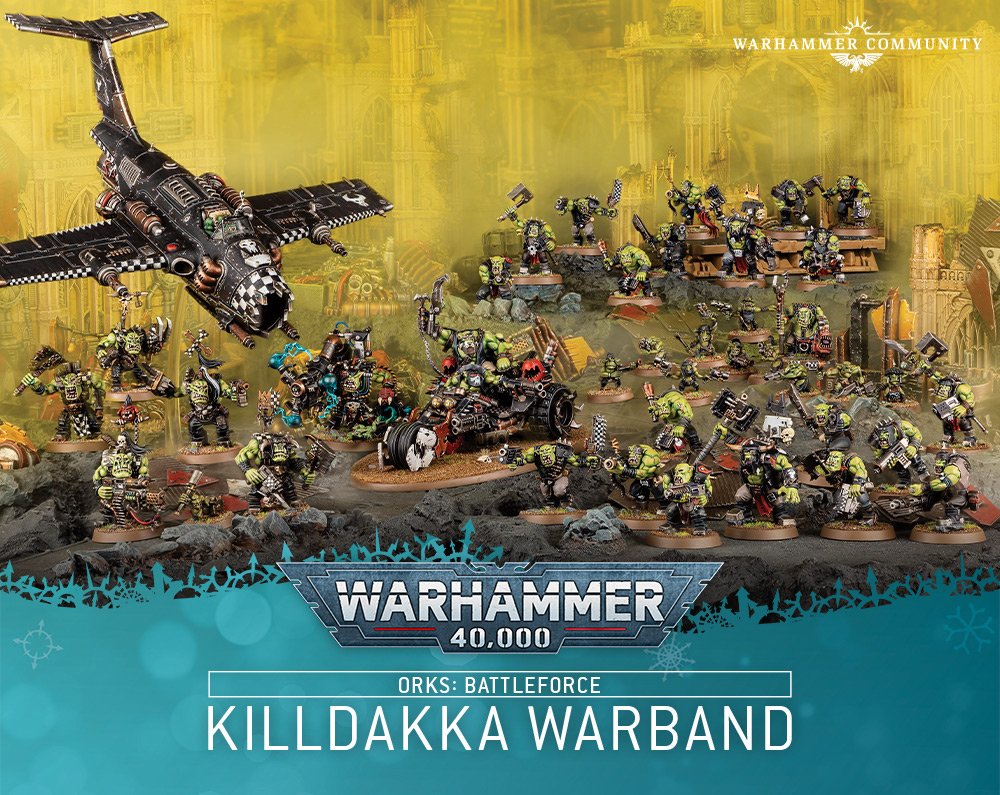 The Killdakka Warband is one of two sources available for the new Boyz kit, with the Combat Patrol (85 GPB/$140) being the other option. Given that the Combat Patrol box also contains the otherwise impossible-to-obtain Deffkoptas, the value of this Battleforce mostly depends on your level of interest in the ancillary stuff. Most of the units have a place and have seen use in competitive lists. Grots are a cheap source of fodder and objective sitting, while the Deffkilla Wartrike, Shokk Attack Big Mek, and Dakkajet kit all have a role in many armies. The odd unit out is the Nobz, which don’t really see much play. Whether those units and 45 GBP / $70 are worth it over the other bits of the Combat Patrol box (Mega-Armored Warboss, 3 Deffkoptas, Deff Dread) is likely going to be up to the needs of the purchaser. 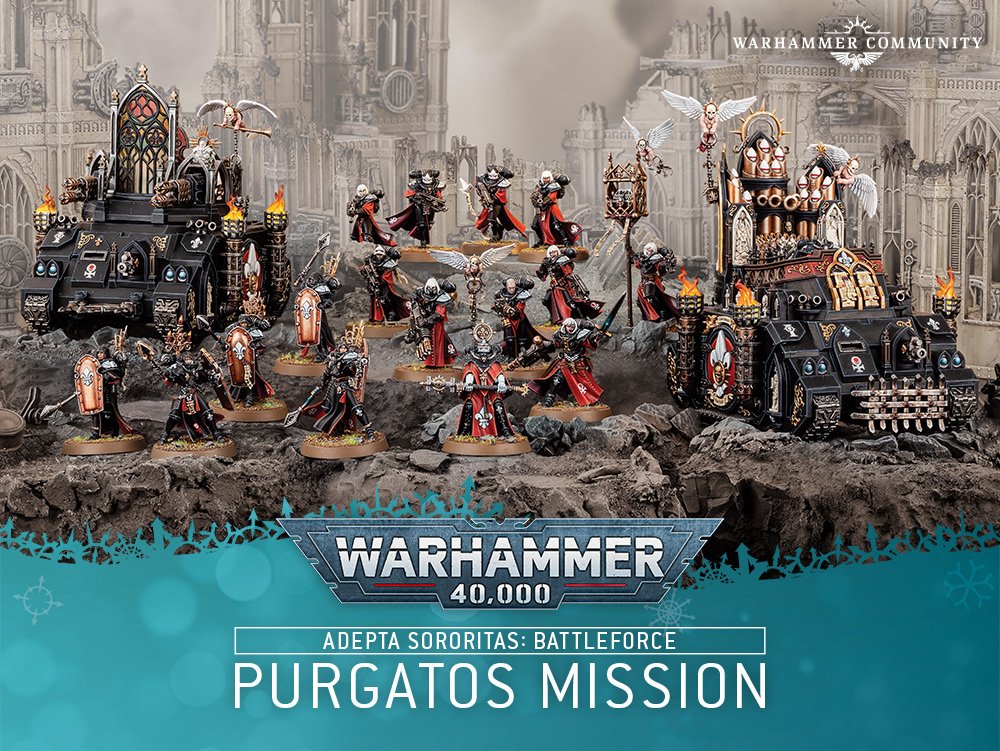 The real shame of this box is that Sisters tanks just don’t see much play. While Exorcists were a mainstay of Sisters armies prior to their 2021 codex, modern competitive forces rely much more on foot-slogging lists, potentially with the support of a rhino or two. That said, Immolators do see some use in good lists here and there – most recently at the North and South GT in a top 4 list, where taking 1-2 can give you a tough, mobile source of multi-melta shots, and a recent September GT-winning list featured an Exorcist, and neither are bad units. Beyond that, the Sacresants and battle sisters are must-haves in every Adepta Sororitas army and the Dogmata shows up in most, making this a box that’s great for new players and potentially still a good value for  players looking to add to their army who don’t mind adding a couple of tanks. 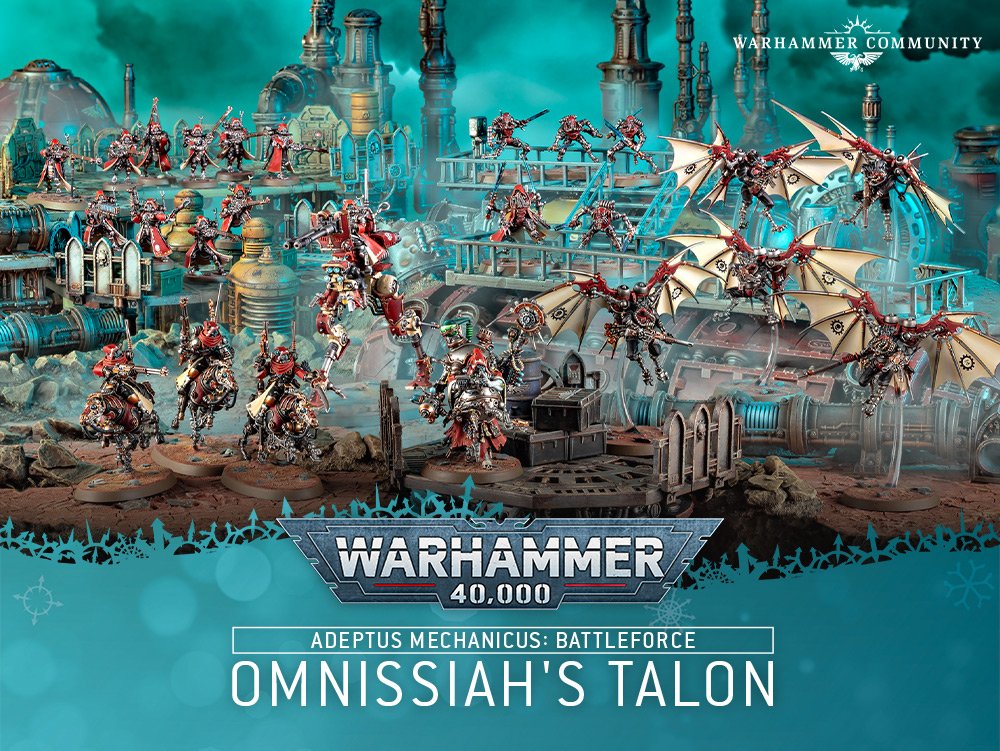 There are so many good units in the Adeptus Mechanicus army that it’s difficult to make a bad army box for them, especially if you aren’t putting Kataphrons in it. While most of these units are a shadow of what they were six months ago when Admech were terrorizing the meta, there’s still a bunch of great stuff here that form the core of any Mechanicus army you’d want to build, and almost all of them are dual kits anyways. It also helps that Admech are likely the worst army in the game from a dollars-to-points ratio standpoint, so any discounts you can get on the units you’ll likely take are worth it.

That wraps up our look at the new boxes. By all accounts, most of them are a good deal and even the worst of them (space marines) is likely to be valuable at some point following a new balance pass. The bigger problem will likely be getting ahold of one of these – they tend to sell out quick and supplies are limited so if you want one, good luck grabbing it!