This Ruleshammer article will cover the quirkz and odditiez to be found in Codex Orks! You can also find answerz to many more questionz in the Ruleshammer Compendium!

Killsaws and additional attacks for 2

Do they cause +1 or +2 attacks? A question I really was hoping the FAQ would cover, now that it hasn’t I think I’ll weight in on it. Though I still think an FAQ is necessary to be certain.

Each time an attack is made with this weapon, subtract 1 from that attack’s hit roll. Each time the bearer fights, if it is equipped with 2 killsaws, it makes 1 additional attack with this weapon.

In my opinion Rules as Written that’s +1 per weapon, and they have 2 of them so +2 in total. Essentially I think this should work like any other weapon ability, for instance if a model has 2 melta weapons both of them will trigger their rule and check if their criteria is met and get their bonus damage. So in this case, you have a Kill Saw, you check if the model has 2 of them, it does, that Kill saw gets an extra attack. Later on you get to the second Kill Saw, you check the model has 2 of them, it does, so you benefit again.

I will say I’m not 100% sure this was the intent though; however that a lot of neater ways of writing a rule that would only give +1 attack. Such as having the rule be part of the unit not the weapon, or having “pair of Killsaws” with a separate profile as a weapon option for instance.

There’s also the Trygon in the room to consider and an FAQ I think originally written in 8th edition to contend with. First of all the Massive Scything Talon Rule is very similar.

You can re-roll hit rolls of 1 for this weapon. If the bearer has more than one pair of massive scything talons, it can make 1 additional attack with this weapon each time it fights.

and the FAQ on them also pretty clear

which honestly I wouldn’t blame anyone saying indicates how Kill Saws should be ruled. However this would be applying an FAQ for a different faction, from a different edition, to a 9th Edition codex. Also Trygon Scything Talons are extra weird in being a singular weapon that only comes in pairs, of which the model can take 3 pairs.

I know this is the conclusive answer that many players want, but sometimes agreeing that the rule is ambiguous is step one. Then you know to include it in the pregame discussion so that it decided on then, not in the moment is matters when the pressure is on! 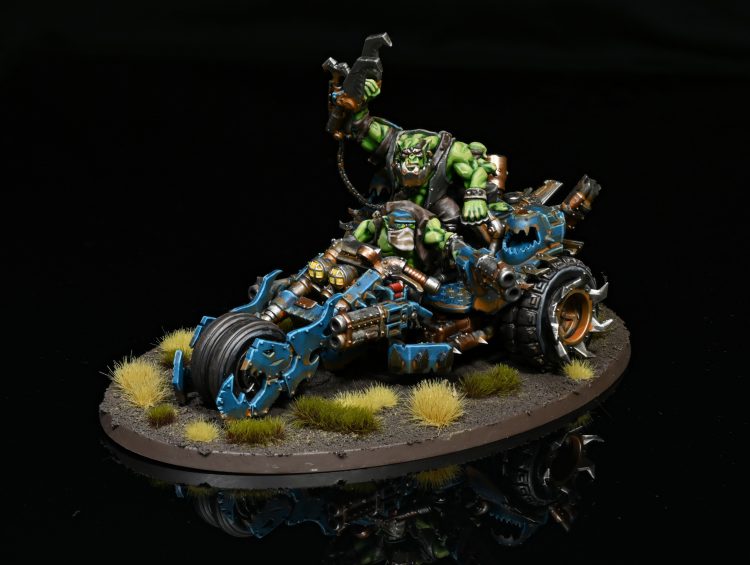 Gretchin Units (including their artillery) and Aircraft

While unlikely make use of the Advance-and-fire part of the Speed WAAAGH! ability, a lot of Gretchin units qualify for the second part:

Each time a model in an ORKS VEHICLE or ORKS BIKER unit from your army makes a ranged attack, improve the Armour Penetration characteristic of that attack by 1.

Mek Gunz, Killa Kans, and I think all of the Ork Aircraft meet the ORKS VEHICLE requirement for this boost, regardless of the fact that they’re not particularly speedy. It’s not just the slow Gretchin stuff either, even the big stompy Ork stuff benefits like well Stompa, as well as most of their heavy support units.

What about Open-Topped Units and their passengers?

A lot has been said about the new Open Topped FAQ, a some of it said by me.

This would arguably apply but as the modifier for Speed WAAAGH! is specifically when the ORKS VEHICLE makes a ranged attack, it’s often argued that it only applies to when the vehicle is making attacks and not when you’re resolving attacks for the units inside. This is how I would suggest it be played – that the Speed WAAAGH! buff doesn’t apply to embarked units – however I’d really like to see this final wrinkle in the Open-Topped rules be addressed and made clear in an upcoming FAQ. 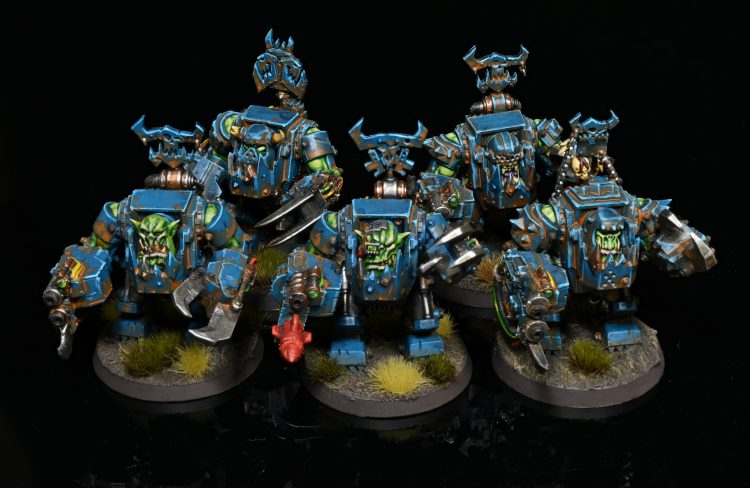 GW went heavy on the Orkish in the latest codex, with several units have Keywords using a “Z” for pluralisation. Whilst now RAW there are PLENTY of examples in the codex that the “Z” is in fact pluralisation and any arguing about it not being is going to be at least a little thin!

All datasheets have a list of keywords, separated into Faction keywords and other keywords. The former can be used as a guide to help decide which models to include in your army, but otherwise= both sets of keywords are functionally the same. In either case, keywords appear in Keyword Bold in the rules. Keywords are sometimes linked to (or ‘tagged’ by) a rule. For example, a rule might say that it applies to ‘Infantry units’. This means it only applies to units that have the Infantry keyword on their datasheet. The pluralisation (or not) of keywords does not affect which units the rule in question applies to. [Core Rules PDF Pg3]

Key examples of this being Orkish pluralisation can be found in units such as Nobz being made up many Ork Nob, and Boyz units being make up of many Ork Boy.

Are Ammo Runts a single re-roll?

A Codex wouldn’t be complete these days without a questionable cherub effect. Ammo Runts are certainly questionable, but also pretty straightforward.

Once per battle, when the bearer makes a ranged attack, you can re-roll the hit roll.

There’s really no meat on this bone here, it’s 5 points for a single model to re-roll the hit roll not the unit as it’s “a ranged attack” singularly and whilst a lot of rule sin 40k are written singularly the triggers are not, as such as the Rites of Battle Aura.

Rites of Battle (Aura): While a friendly <CHAPTER>CORE unit is within 6″ of this model, each time a model in that unit makes an attack, re-roll a hit roll of 1. 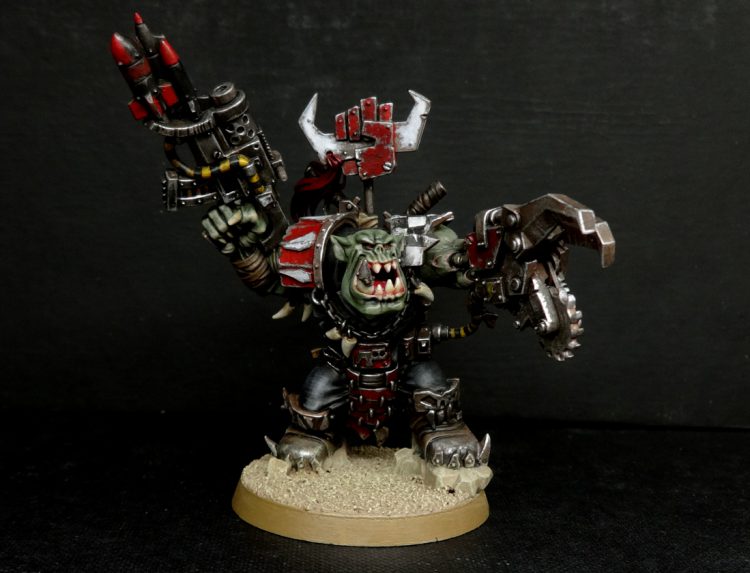 The Forgeworld FAQ has removed the WARBOSS keyword from the unit, causing it only be able to declare SPEED WAAAGHS.

Trukk Boys and other Specialist Mobs in Transports

Starting with a pretty obvious one here… the Specialiast Mob rules state that the units they are used on lose their <CLAN> keyword, replacing it their new Specialist Mob keyword – whatever that may be.

Each time you upgrade one of these units, that unit gains the SPECIALIST MOB keyword, and you must replace that unit’s <CLAN> keyword with the appropriate keyword as described under that specialism. 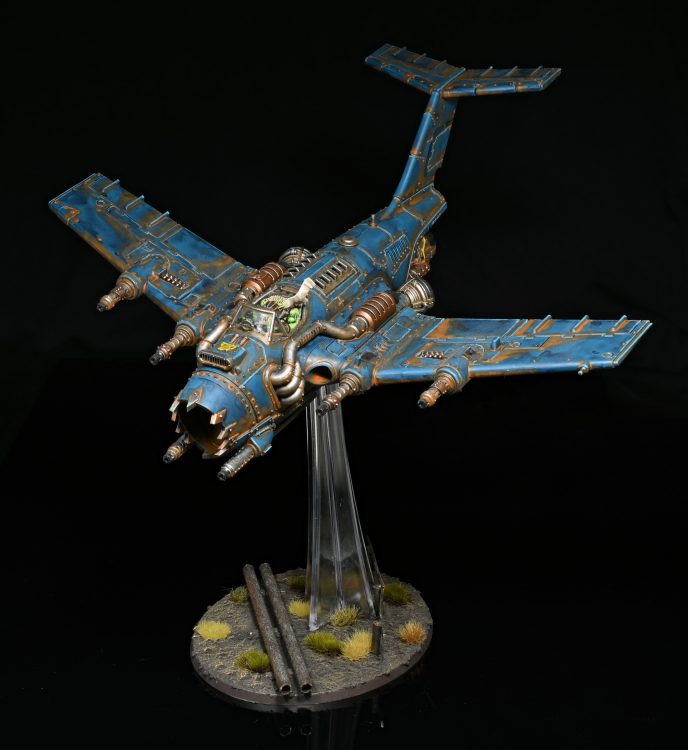 There’s not really an answer to what happens with this yet. The Snagged rule doesn’t explain what to do if an Aircraft with a minimum move is unable to make that move.

Each time this model makes an attack with it’s stikka kannon, if an enemy VEHICLE or MONSTER model (excluding Titanic or Aircraft models) loses any wounds as a result of that attack, roll one D6: on a 4+, that enemy model cannot finish any type move more than 12″ from this model until the start of your next turn. If this model moves for any reason, or is destroyed, this effect ends. [Orks Codex – Kill Rig]

This actually resolves two issues that the rule had. Aircraft are not exempt from the effect entirely, so no more wondering what happens if they can’t make their minimum moves. However also it removes a secondary issue where it could use a combination of charging, piling in and consolidating to end up in a position where the snagged unit couldn’t possibly end a move within 12″ because it was too far away. Now the effect ends of the Kill Rig moves for any reason.

Brutal But Kunnin and Goffs Kultur… how do they interact?

So my suggestion turned out to be wrong, we now have a specific FAQ on this.

Q: When a Goff model with the Brutal but Kunnin Warlord Trait attacks, are any additional hits generated by the No Mukkin’ About clan kulture that don’t reach the Inflict Damage step counted when determining how many additional attacks can be made?

A: Yes. Note though, that when making additional attacks as a result of this Warlord Trait, no additional hits can then be generated due to the No Mukkin’ About kultur

So now looking at the rules again

BRUTAL BUT KUNNIN: Each time this WARLORD fights, if all of it’s attacks target one enemy unit, after resolving all of those attacks, it can make a number of additional attacks against that enemy unit equal to the number of attacks that did not reach the inflict damage step.

Each Time a model with this kultur makes a melee attack an unmodified hit roll of 6 scores 1 additional hit.

Any additional hits generated by the Goff Kultur are counted in the pool of attacks you check to potentially do again if they don’t reach the inflict damage step. Though when making these attacks again none of them can trigger the kultur this time around.