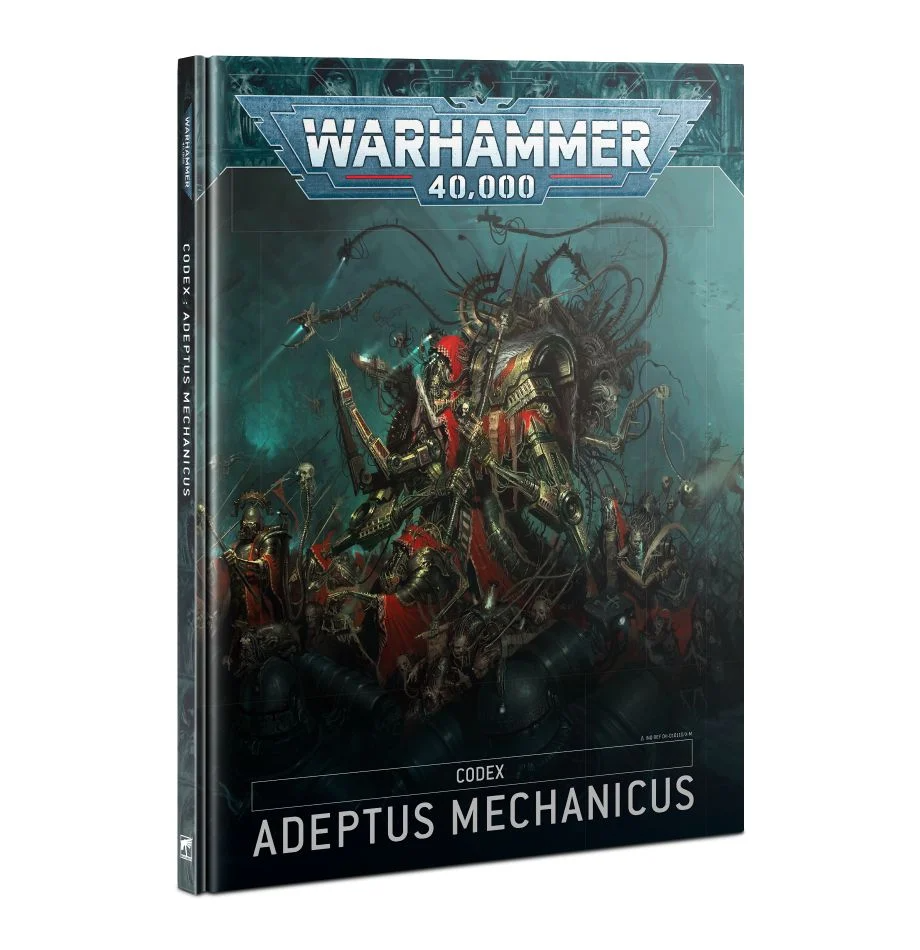 It happened again. Games Workshop released a book so busted that it needed a second FAQ. We covered the first iteration of changes, but GW is back on it. This new document doesn’t address all of our concerns, but it should go a long way toward restoring a sense of balance to the game – which is to say that you can watch Drukhari or Orks run roughshod over the entire scene, as a change of pace, instead of it being Ad Mech all the time.

At any rate, the changes.

The Lucius Dogma no longer stacks with Light Cover.

The +1 save benefit from Solar Blessing now only applies if you aren’t already getting the benefits of Light cover. Good. Let the other Forge Worlds have a turn. This is just going to lead to Mars popping up all over the place, so it’s at least a different kind of nightmare to deal with.

Rob: This certainly helps reduce the oppressive nature of the trait, where having +2 sitting in light cover meant your 8-point Skitarii would be rocking a 2+ save on top of their invuln. Not sure it’s enough, though.

Wings: This is narrower than I hoped for and while welcome, doesn’t solve the key problem that on the turn where Lucius stacks with Bulwark Doctrina, it essentially turns off AP0 weaponry as a meaningful way to interact with AdMech. Don’t get me wrong, it’s a good change (and not stacking with Firepoint Telemetry Cache matters a lot), but without (spoliers) any accompanying points changes, I don’t think it goes far enough.

Acquisition at Any Cost is once-per-game.

Rob: This is a huge change and something that was sorely needed. Acquisition at Any Cost was a powerful effect to just pull out every turn, making it nearly impossible to finish off units or get additional attrition kills after a brutal turn and only having to be within 6″ made it almost trivially easy to have this in your back pocket anywhere on the table. It’s still 1 CP and more restrictive since you generally have to have the whole unit be near the objective, and if you need the effect a second time well, there’s always Insane Bravery for 2 CP.

Wings: Yes, good. This one they went harder than I expected and it’s very helpful. Crucially, the “wholly within” change opens up a new, meaningful route to interact with Skitarii hordes – you can pick off 5-6 models from lots of units and hope to reap a substantial toll in morale, as it’s way tougher for multiple units to benefit from a single activation of this (and indeed much harder to use at all).

The Stratagem has been updated. Units firing with Enriched Rounds now only auto-wound on hit rolls of 5+ instead of a 4+, and it costs 2CP for units of 11 or more models.

Given how absurdly busted this stratagem was, and how incredibly obvious it was that GW never thought through the implications of putting it on a squad of 20 models, this change was both inevitably and high deserved. It still might not be enough to rein in the book, but we’re guessing that Orks will handle that anyway, so no one cares anymore.

Rob: This was probably my biggest issue post-codex, though I’m definitely biased as a Mortarion-haver. The new rules text makes a ton more sense and while I think we’ve already effectively answered the question of what happens if you roll a 4 to wound on an attack that otherwise wouldn’t hit, this change also helps significantly reduce the instances of that happening, since most of the time you’ll be capped at hitting on a 5+ anyways with negative modifiers. This ability was stupid good otherwise and while we didn’t get any points increases for Skitarii in this update, this combined with the Galvanic Volley and Lucius nerfs does make them less of a nightmare.

Wings: Fully deserved. Without a point cut, might still not be enough, but an extremely good step.

Galvanic Volley now makes your guns Heavy 3 instead of Rapid Fire 2. Sometimes this is going to result in more shots, sometimes less, but at least you aren’t hitting on 2s without a little more effort.

Rob: Yeah, another good change. Hitting on 2s is going to be tougher and while yeah, sometimes you’ll get more shots, overall this feels much more balanced.

Wings: I like this one, it’s a good way of addressing the issue without making the stratagem completely dead.

Ballistarii and Dragoons are no longer CORE.

Good. They didn’t deserve the keyword, and being able to stack re-rolls on these things went a long way toward making this book oppressively good. At a certain point, over-tuned units “break” the game, in the sense that their – situational, dependent on sub-factions and support units – offensive output or defensive resilience can spike so incredibly high that there’s simply no fair way to cost them: there are just too many moving parts to account for. Fully-buffed Ironstriders are one of them, and yanking CORE flattens the curve on them enough that they’ll still show up on tables, without being as ridiculous.

Rob: Yes, very good. The CORE keyword remains one of the most baffling additions to the 9th edition rules. I’ve yet to see a codex where its implementation made sense, or where it felt like a worthwhile and necessary addition to the game that did something you couldn’t have done with other keywords. Honestly things like captain/chaos lord auras should just be limited to INFANTRY, BIKERS, and DREADNOUGHTS since that’s 90% of the net effect.

Wings: OK so this is very good, and honestly I wouldn’t have expected this to even be on the table. This has sweeping implications and here I think not making points changes at the same time was probably the right call. No more benefit from Exemplar’s Eternity and the Marshall’s aura cuts their output down considerably and no more fall back/shoot from Programmed Retreat gives you far more ways of interacting with them. I think they’re still fine units, but much, much more sensible.

What Does it Mean?

Greg: Beats me, but remember last time around, when we said “if you’re monitoring the competitive scene it’s probably time to start hoping that AdMech get a more substantive balance FAQ in a month or two, similar to what Drukhari saw recently“? We were right, so that’s fun.

Rob: These are substantial nerfs, and like the Codex: Drukhari changes, they’ve been put in place pretty quickly – The Codex released at the end of May, which means that we started to get our first games with the book around June 12th and June 19th. Admech were initially very dominant, with some key issues, and most of those that were the result of errors in the book or ambiguous wording – like the Pteraxii being able to arrive and leave on the same turn or Onagers not having DATA-TETHER – were fixed two weeks later, in the July 5th FAQ. That left balance updates, and charitably speaking, if we give GW 4 weeks to accumulate data and coordinate with top players (or just wait for Goonhammer to release its patch suggestions), plus a week to write the FAQ and proof, that puts us basically at today, give or take a desire to put it out after the latest Metawatch article goes live. That’s a total turnaround time of about 6 weeks from debut to fixes, and that’s pretty damn good! It’s slower than I’d personally like but I don’t think there’s a responsible way to move faster with regard to balance updates – you need time to see the book in action, analyze the results, formulate a plan, proof it, and put it into play. The aspect that I think is still too slow is the initial FAQ/fix update – waiting 4 weeks from the book release on that when there were obvious errors in the book that needed day 1 fixes was a bit much, but the flip side is that waiting an extra week or two likely gave us the Pteraxii fix earlier than expected, since that might not have been corrected in a day 0/day 1 FAQ.

We recently published an editorial from Boon about the community stepping in to make adjustments but honestly if GW can tighten up the timing of their initial FAQs to be closer to that 2/3-week window and keep making necessary balance adjustments like this following a book’s release, I think that a strong hand from the community won’t be necessary, since at the very least I don’t think the community can (responsibly) move any more quickly than Games Workshop has for the last two books.

Now, that said, that still leaves two things to consider:

Wings: I think it’s very good news that, for a second time running, prompt action has been taken in response to clear issues, and I think the hit to Ironstriders is particularly laudable given how bold it is, and is very good news for anyone that likes vehicles at all. That said, I think without some point changes this will turn out to not have been enough, and I’d give Sicarian Infiltrators in particular the nod as the unit that’s going to force a second pass at some point – I’d expect a lot of lists to just pivot to hordes with 3×10 of them, and with a relatively small change to Lucius I think those builds are still going to be impossible to clear adequately. Still, we asked for changes and we got them, and that’s definitely positive – we’ll see if people can find an answer to the new AdMech builds that arise..

Any comments, questions or suggestions? Let us know at contact@goonhammer.com.