Finishing your own army is core to the Warhammer 40,000 hobby. In our Army Showcase series, Goonhammer contributors take a look at the armies we’ve been collecting for years, and the new ones we’ve just finished – what drew us to them, why we keep building and painting, and how they play on the table. This week PierreTheMime is discussing his Death Guard in all their slimy goodness. If you want to know more about how to paint the models here, the scheme is featured in our How to Paint Everything: Death Guard article.

I’ve been playing Warhammer 40,000 since the early 2000s and, while I’ve jumped around to various factions throughout that time, one of the units that always attracted me were Plague Marines. Their backstory, their look, and their rules on the tabletop were pretty great across multiple editions, so when Games Workshop announced that they were creating an entire army for them I was already sold. I had just moved to another state right around the time the Dark Imperium starter set hit the shelves, so while I was bogged down in moving boxes and adjusting to a new area, I slowly began assembling and painting my new gross space Barbies. As 8th Edition really got into full swing and the rest of the army models were released, I started getting my head around where I wanted my army to land and began buying/hobbying accordingly.

For a color scheme I decided I wanted to stick pretty close to the standard. While there’s been some minor changes over the years, the Death Guard are primarily brought to you by Elysian Green, Balthasar Gold, Wazdakka Red, Genestealer Purple, Ushabti Bone, Wraithbone, and Agrax Earthshade.

Over time I became more comfortable with my color decisions and style for the army. I gradually got better at raising colors and using highlighting details using edging. I finally got it through my head that highlighting red means mixing in some orange (this for whatever reason took me a while to learn and it makes a huge difference!). I pushed the shading and made the “bright” colors slight brighter, giving my models a vibrant tone which I felt gave them some nice character compared to the darker palette a lot of Death Guard tend to have.

By the end of 8th Edition I had a full Death Guard army which I used semi-regularly to good effect. It mostly followed what was the common Poxmongers build at the time–a trio of Myphitic Blight-haulers, a Daemon Prince to haul around the Ironclot Furnace, a bunch of Poxwalkers, and the supporting characters. At the time I decided I didn’t want to deal with Mortarion for a number of reasons, namely the cost and complexity of the kit, but also felt leaning into daemon engines was more my style.

Like everyone else, 9th Edition dropping during the pandemic really blunted my enthusiasm for hobbying, as getting in games is my largest motivator to get models ready for action. Thankfully thanks to the wonders of the internet, I was able to get some experience with what I felt worked for me and began plotting my army updates accordingly. After putting it off for years, I finally painted up the Dark Imperium Lord of Contagion model which I ended up being pretty pleased with. It helps they’re also a beast in their current book.

Eventually with enough practice with how Death Guard played with their latest book, I decided it was time to bite the plague-infested bullet and pick up ol’ Morty as a centerpiece. As one is like to do, I took my time on this bad boy and I think it turned out pretty nicely. I detailed a bit of my process in a previous How to Paint Everything article. Mortarion has served me very well on the table, typically sporting Gloaming Bloat to shut down anyone nearby who might have had a hope of putting in good damage with Overwatch or leveraging rerolls. Does he get blown off the table frequently? Yes, but he just as frequently serves as an dominating destructive force that leaves the enemy force reeling.

As I was determining how to bolster my offensive capability, I found that Foetid Bloat Drones with Fleshmowers are astoundingly good–who knew?! Oh, you did? Well, fine. These things are great and act as both a capable attacker as well as an objective defender thanks to Dark Cravings.

With the recent clarification to summoning rules not breaking detachment special abilities, I decided that adding in Epidemius to my competitive list was a solid move. The model is ancient by sculpting standards and it really shows, but the unit abilities when it comes to Nurgle Daemons are absolutely bonkers good in a Daemon Engine/Primarch scenario. After some searching, I managed to scrounge a pewter original from the internet, but it was missing its arms and the banner/flag top bitz. I did some sculpting and kitbashing to get the model into working order but some of the Nurgling models holding up the palanquin are very rough and I just couldn’t mentally commit to caring too much about how they ended up. I ended using a good amount of Nurgle-related stuff from the Skaven and Maggotkin AoS lines, adding a Plague Priest banner and book to the top and using some Nurgle’d-up poles from the Maggoth kit. I also tossed in a Nurgling from Mortarions kit and the flies from my second Foetid Bloat-drone model because I love those little guys and they add some character.

As it stands currently, here’s my 2000pt competitive list in all it’s poorly-photographed glory:

Honestly I’m pretty satisfied with where I sit with my Death Guard at the moment. That said, every single Death Guard release GW has managed to knock it out of the park in terms of models and rules so I’m pretty optimistic that I’ll be revisiting these “fine” fellows eventually. I *might* pick up a Lord of Virulence model just to have it at some point, but the Lord of Contagion is still my fav so I can hold off on that as my hobby-mind wanders elsewhere.

Here’s a healthy sampling of the other Death Guard models I have on my shelf itching (likely with lice) for battle: 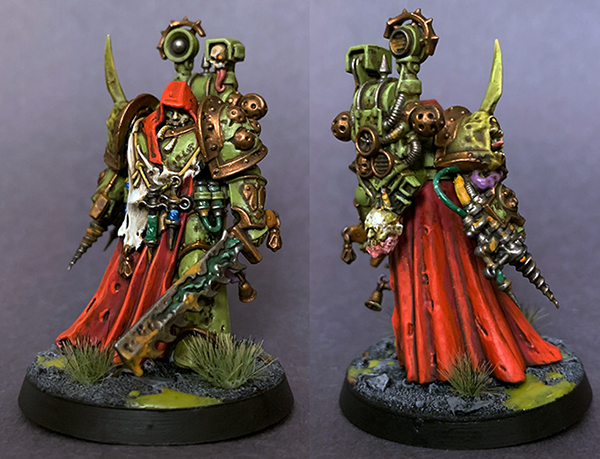