This Ruleshammer article will cover the quirks and oddities to be found in Codex Thousand Sons! You can also find answers to many more questions in the Ruleshammer Compendium!

All Is Dust and other abilities

Once again we have an interaction between a rule that has an effect against 1 Damage weapons and another rule that reduces incoming damage by 1. Frustratingly (especially for Admech players, I presume), this one is worded slightly differently, enough so that it works against incoming 2-damage weapons.

Let’s look at All is Dust in the new book:

Each time an attack with Damage Characteristic of 1 is allocated to a model in this unit, add 1 to the armour saving throw made against that attack…

The Rubric ability is pretty straight forward; 1 damage weapons triggering a +1 to armour saves. How does Unwavering Phalanx differ from Chaff Launchers though?

Unwavering Phalanx
Use this stratagem in your opponent’s Shooting Phase, when a THOUSAND SONS RUBRIC MARINES or THOUSAND SONS SCARAB OCCULT TERMINATORS unit from your army is selected as the target of an attack. Until the end of the phase, each time an attack is made against that unit, subtract 1 from the Damage Characteristic of that attack (to a minimum of 1)…

importantly, this happens each time the attack is made, which is before the allocate step, which is where Chaff Launchers modifies the Damage of the incoming attack:

Chaff Launchers: The bearer gains the SMOKESCREEN keyword. Each time an attack is allocated to the bearer, subtract 1 from the Damage characteristic of that attack (to a minimum of 1).

This is a very specific difference between the two, leading to different resolution and allowing the effects of Unwavering Phalanx and All is Dust to combo together. The GW we all know and… like the models of. Because Unwavering Phalanx adjusts the Damage before the allocate step, the defensive FAQ says to use that modified value.

So yes, a unit with All Is Dust that uses Unwavering Phalanx would get +1 to their saves against incoming attacks with 2 Damage weapons that are then modified down to 1 Damage.

The timing for Grav Cannons is at the allocation step, at this moment the guns is still damage 1, and then it becomes 2 based on Rubric’s save. However because it was 1 when allocated the Rubric uses that value to determine if they All Is Dust triggers, which it would, allowing them to add 1 to their saving throws. To use a modified characteristic for triggering a rule, it must be modified before the attack is allocated. 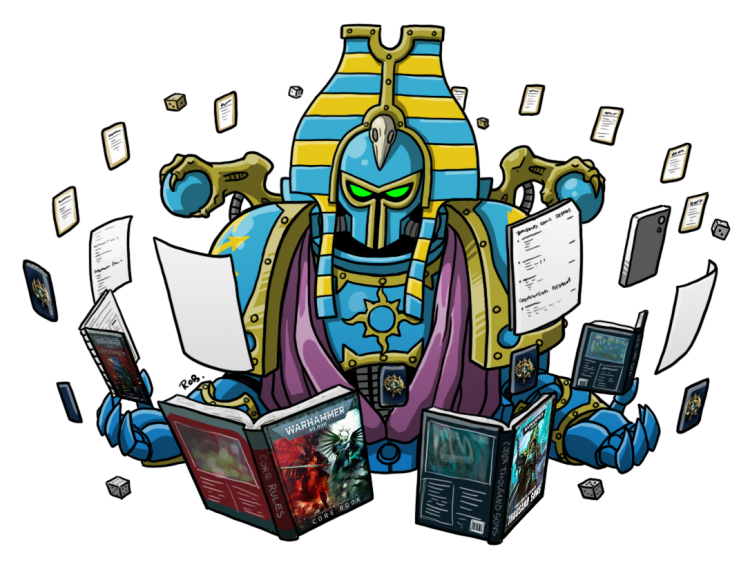 One of the better things about 9th edition is that it really built upon the body of 8ths FAQ to give us a decent set of Rare Rules, and one of the large such Rare Rules clarifies this interaction very clearly

This ability clearly meets the criteria for the Repositioned Units Rare rule below.

All the rules here apply to this unit, there’s 10 of them, but our answer is in the first two. All rules that apply to a unit setup as reinforcements apply to a repositioned unit, and as such the second rule applies clearly stating that the repositioned unit counts as having moved. 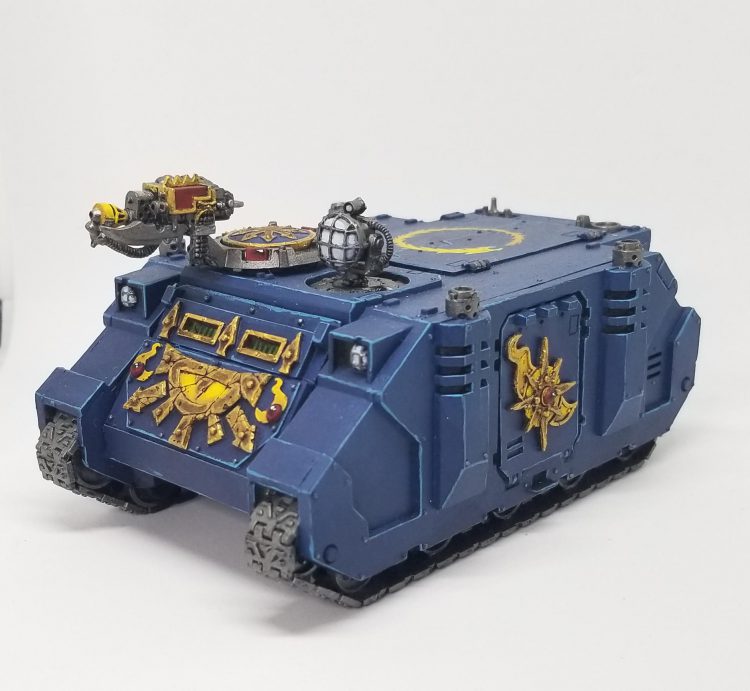 Thousand Sons Detachments – what gets the 5+ Invulnerable save?

This is a little surprising, at least for me but this detachment ability applied to a significant amount of Thousand Sons vehicles.

If this unit is ARACANA ASTARTES or TZAANGOR, each model in this unit has a 5+ invulnerable save.

Hebrutes, Rhinos, Vindicators, Land Raiders and Predators all have ARCANA ASTARTES as keywords so they all get the 5+ invulnerable save, and the same will apply to vehicles in the Imperial Armour Compendium that Thousand Sons can take, since per the FAQ they can take any <LEGION> TZEENTCH unit in the Compendium and when they do it will replace <LEGION> with THOUSAND SONS and gain the ARCANA ASTARTES and <GREAT CULT> keywords. So this will give a 5+ invulnerable save to Terrax Pattern Termite Drills and Dreadclaw Drop Pods in a Thousand Sons Detachment. Note that Daemon Engines such as Defilers and Heldrakes don’t have the ARCANA ASTARTES keyword and so won’t get one from Brotherhood of Sorcerers but those units already have a built in 5+ invulnerable save for being Daemonic! 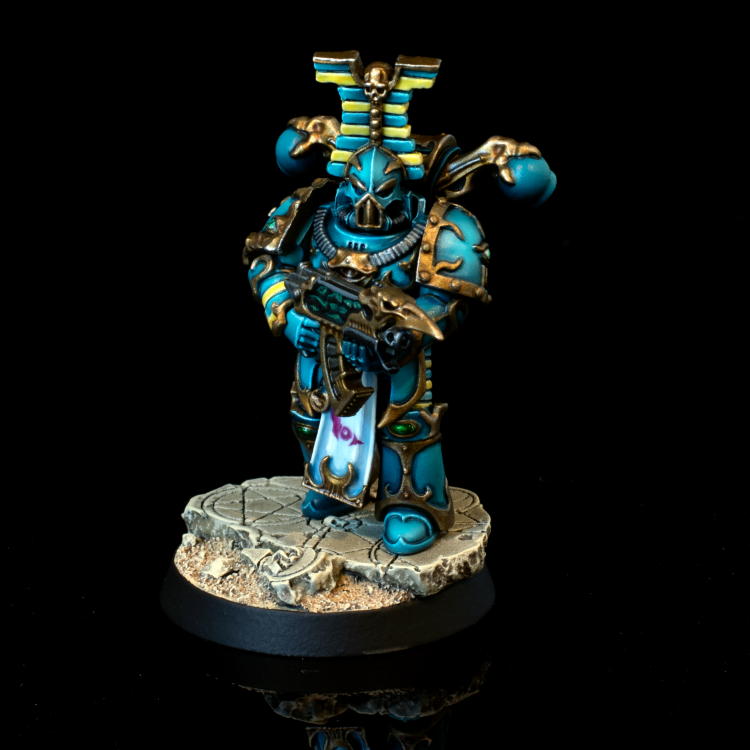 What about against a single model in combat?

An interesting piece of wargear, with an effect I’m not sure we’ve seen in the game before.

Conniving Plate
In the Fight Phase, each time an enemy model within Engagement Range of the bearer selects targets for it’s attacks, it can only allocate up to half of it’s close combat attacks against the bearer.

But what happens if the plate-equipped character is in fact the only unit within Engagement Range when an enemy models in a unit go to select targets? Well, essentially the affected units just lose half of their attacks. Bear in mind that this ability affects each model, not the unit. So if a unit has 10 attacks in total it can’t just allocate 5 into the Conniving model and 5 elsewhere unless every model in the fighting unit has 2 enemy units within Engagement Range to split attacks between. In practice you’ll almost always lose some attacks from your usual total when you’re trying to fight a unit with this relic.

Edit: Also note that a model has to be within Engagement range to be affected by this, so it’s possible for a model to be able to fight without being in Engagement Range, i.e. if it is within 1/2″ of another model within 1/2″ of your unit. In those cases it won’t be affected by the Conniving Plate, but will still be able to make attacks against your model and so can allocate all of them as the effect of the plate is per model, not unit.

How does the Thousand Sons’ relic, The Conniving Plate, interact with weapons that allow the bearer to make additional attacks with them?

So conniving plate has caused plenty of confusion that I think has some answers, but also plenty of new questions I would hopefully like to see some resolution for in an FAQ. First of all here’s the new rule we’re discussing:

Conniving Plate
In the Fight Phase, each time an enemy model within Engagement Range of the bearer selects targets for it’s attacks, it can only allocate up to half of it’s close combat attacks against the bearer.

For this I’m going to provide an example of how I think the rule should work using a Lord Discordant, a model with a bunch of weird and wonderful extra attacks.

The Lord Discordant on Helstaker is a single model

A Lord Discordant on Helstalker is a single model armed with an autocannon, bolt pistol, impaler chainglaive, mechatendrils, frag grenades and krak grenades. His Helstalker is armed with bladed limbs and tail and a techno-virus injector.

so I think step one is to determine the total total number of attacks after all abilities, including the Hellstalker as these need to be declared at the same time anyway (their wording is after resolving the Disco’s attacks, not after he fights).

After the Lord Discordant makes his close combat attacks, you can attack with his Helstalker. Make a number of additional attacks as shown in the damage chart, using this weapon profile.

And can then only allocate 6 of them, of any of the weapons above to the Conniving plate model. I don’t feel the rule is worded restrictively enough to limit it to half of each weapon, just half the attacks the model is able to make. Notice I said 6 though, not 7.

Because it doesn’t actually modify the attacks stat of any models or any weapons, the rounding rules would appear to not apply.

As no modification occurs, no fractions exist. You simply can’t allocate more than half of a models attacks, and 1 is more than half of 1. So that limits 1-attack models to a max of 0 attacks allowed to be allocated into the model bearing the Conniving Plate.

1. The number of 1-attack models that can actually threaten a Daemon Prince or Sorcerer to begin with is pretty small to begin with.

2. The Conniving Plate affects models, not units, so even if you are in combat with a bunch of 1-attack models, they can distance themselves to still get the majority of their attacks against you. This is an effect that seems really powerful against 1-attack models, but is not as broken as it appears, especially when we read on below and remind ourselves that Engagement Range is not Fighting Range.

Finally one extra note worth mentioning is that the ability is written to only affect models within Engagement Range.

Sorthis Mirror – why are you hitting yourself?

Another interesting ability, using enemy models against themselves…

Each time the bearer is selected to fight, instead of fighting you can select one enemy INFANTRY model with leadership characteristic of 9 or less that is within Engagement Range of it. If you do, the selected enemy models immediately makes close combat attacks against it’s own unit, until it has resolved these attacks it is treated as being a model from your army for all rules purposes. If, as a result these attacks, the enemy model destroys it’s own unit, the bearer counts as having destroyed that unit for all rules purposes.

To put it simply I’m going to argue that it can’t happen. Despite the model counting as being in your army it’s still also part of that enemy unit. If it wasn’t this ability wouldn’t function. As such it’s always within Engagement Range of itself, meaning it can always make these attacks. This is also the only way that the last clause of the ability can ever be reached; if the model can’t attack itself then there’d be no way for the “enemy model [to] destroy its own unit”.

What happens if the affected unit is a unit of one model?

With that in mind if it’s a single model then it just attacks itself. I think that the reason the rule makes it clear to treat it as a model in your army though is to clarify that for these attacks it’s you that controls the model, decides which weapons it will make the attacks with and rolls for them, rather than leaving it to the enemy player to perhaps pick its weakest combat weapons to attack with. 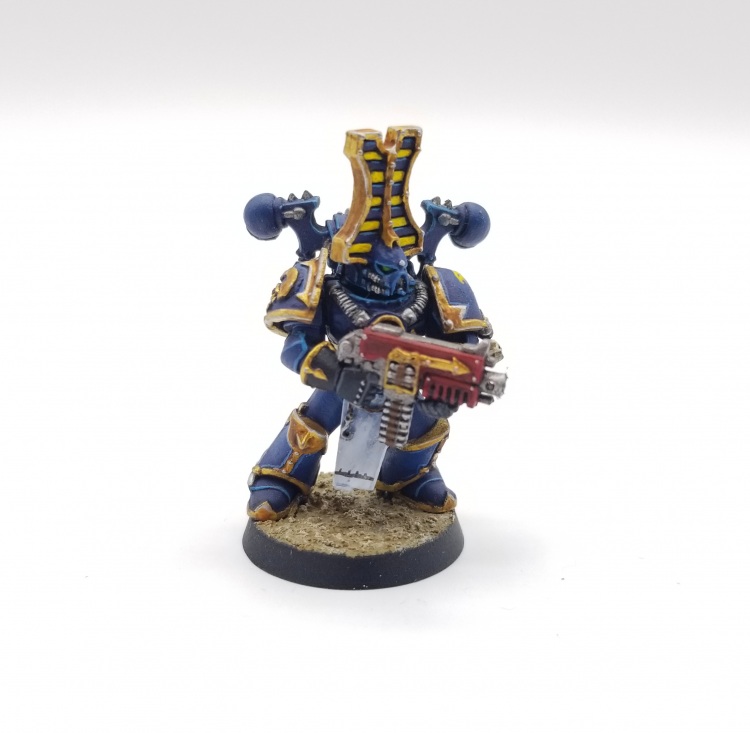 This ability allows you change the result of a psychic test, but can your opponent re-roll a dice you’ve turned into a 1 using Command Re-roll?

The key thing to notice here is what you can change, and that’s the result of the Psychic Test. Roll result has an entry in the glossary.

Roll Result: A roll result is the final result of a roll, after any dice that make it up have been added together, before any modifiers are applied.

As this is the final result, this would be after re-rolls. You can’t know the final result of a Psychic test until you have decided to re-roll or not. However knowing that the enemy might use this ability you could choose to re-roll before they decide to use it; if there was ever a moment when they might not because they wanted to deny another psyker more than this one. Of course in that situation you’d be trying to not get any 6s but still pass.