Every day this week we’ll be publishing an article that covers every phase of the new edition of Age of Sigmar. See what’s changed and what remains familiar with our in-depth looks at the rules. Before we even get to the phases of the game, Liam_Jordan will discuss how to build lists under the new rules and how to prepare for a game

Have you been playing the same 2000pt army for a while now?

Against the same 2000pt army your favoured opponent always brings?

Sick of playing against the same armies all the time at events?

Don’t worry, Age of Sigmar 3.0 is here to help wash away all those problems. In this article I’m going to talk about army construction, specifically for Matched Play events. We do not yet know about any point changes (they will come in General’s Handbook 2021) so for any specific army building examples I’m going to stick to the Soulblight Gravelords, because I expect that they will be the army with the fewest changes to points. Second is that the way the Core Rules are setup, as with previous editions, could easily change in the future, so be sure to take note if you’re reading this article much later than published.

So, army construction for Matched Play has changed a little bit. Below is the (newly renamed) Contest of Generals table. This type of table will seem familiar to those who played the previous edition of the game but has a fair few new rows you need to pay attention to. 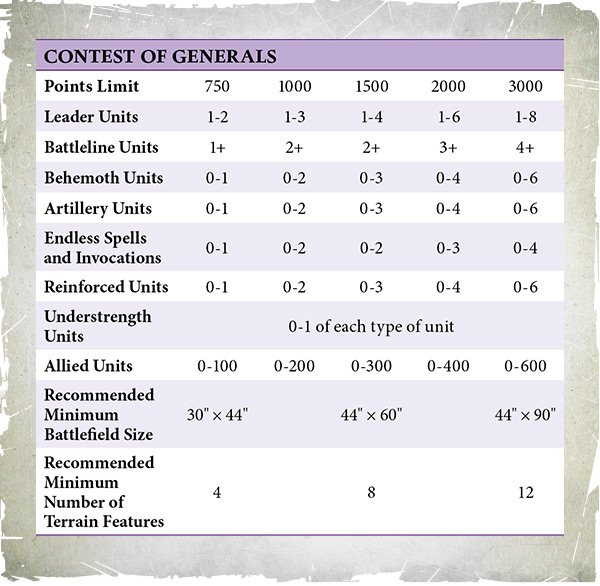 First thing to note is that the points limits have been amended, they’re much more staggered and you can go as low as 750 or as high as 3000 instead of the +/- 250 that always was a bit of a crutch to get the illusion of more variety. The table size now expands as points go up, much like 40k. Unlike that game it does not appear that there will be different missions for different game sizes.

For the purpose of this article, presume that 2000 points will remain as the “Standard” game mode. Many of the rules around unit requirements remain the same, you still need to take a Leader model and you’re still allowed up to 6. 3+ Battleline are still mandatory and both Behemoth and Artillery units remain unchanged at 0-4. Endless spells have been added into this new table and and remain capped at 3, but are limited to 1 per Wizard as per 1.4.1 in the Core rules. Allies have remained in the same with 400pts, 1 in 4 restrictions still in place. There is another big change which is included in the text above the table that no more than half your points can be spent on a single unit, so no more sneaking Archeon into a 1500pt skirmish.

So what has changed? The first thing is a mechanic that has a new name but will be familiar and pretty straight forward to understand Understrength units and Reinforced units. First, Understrength: you can have one unit that is under its mandatory minimum size in your list. Why you’d do this isn’t totally clear but I presume this is for when you lose a model or buy a boxed set where units change size, for example the old Soul Wars box having a unit of 4 Grimghast Reapers despite the actual unit requiring 10. However you still pay for the full amount.

The far more interesting change is Reinforced units, and it will change how you build lists big time. Previously, pitched battle profiles would list the minimum and maximum size of a unit and next to it list the point cost of the minimum size (and a discount for max size, if applicable). If a minimum size of a unit was 10 models for 100 points, you paid 200 for 20, 300 for 30 and so on. Now this system is handled with Reinforcements. All units (Except leaders, natch) can reinforce once (doubling their size) while Battleline can do it twice (tripling their size). For example, Deathrattle Skeletons start at 10, so you can spend one reinforcement to boost it to 20, and a second to boost it to 30. I’m expecting some unit’s minimum sizes to change  with the General’s Handbook release but time will tell on that.

This has two major effects: First it reduces confusion on how big the maximum size of a unit is supposed to be, and minimizes errata for point values. Second, this will drastically cut down on the number of hordes in some lists. My own personal Nighthaunt list from early 2019 had what would now be 8 reinforcements in it – can’t do that anymore. It also had Battleline units up to 4 times their original size, which also would not fly now. I can’t wait to see what unit sizes change (if any) and what knock on effect this has for the game. Certainly more MSU (Multiple Small Unit) builds seem to come to mind but I do feel that some books are going to come out of this better than others.

Dropping the big bomb first, Warscroll Battalions appear to be gone for Matched Play and can’t be included. This harps back to what Ben Johnson mentioned in one of the preview videos about wanting to balance out the “Haves and Have Nots” when it came to these. While it technically doesn’t write them out entirely, it does say that this is going to be contingent on the “Battlepack” you’re using. Battlepacks are supplements that will come with the General’s Handbook or expansion books for Path to Glory. The Battlepack that is inside the core rulebook specifically does not allow Warscroll battalions but does allow Core Battalions. Core Battalions are a new mechanic for the game: Much broader requirements, requiring certain types of units instead of specific ones and grant a small bonus when taken. Whether these cost points or not isn’t clear, we need to wait for the General’s Handbook but for now they appear to be free. The Core Rules state that you’re allowed to use them as long as the battlepack you’re using allows them – in turn this allows events to pick and choose what they want to be included, or allows Games Workshop to add new Core Battalions in each years General’s Handbook, potentially allowing them to shift the game slightly. Want a more Monster themed event then specifically state that you must take a Linebreaker Battalion, don’t want loads of Artillery then ban the Grand Battery Battalion. Simple right? 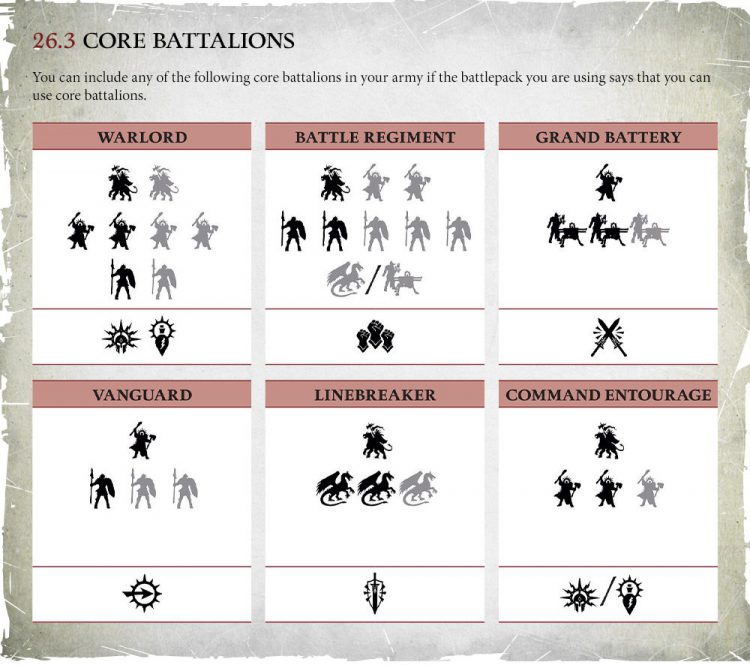 OK So…that’s a lot of symbols that mean nothing to you yet. This requires further clarification. 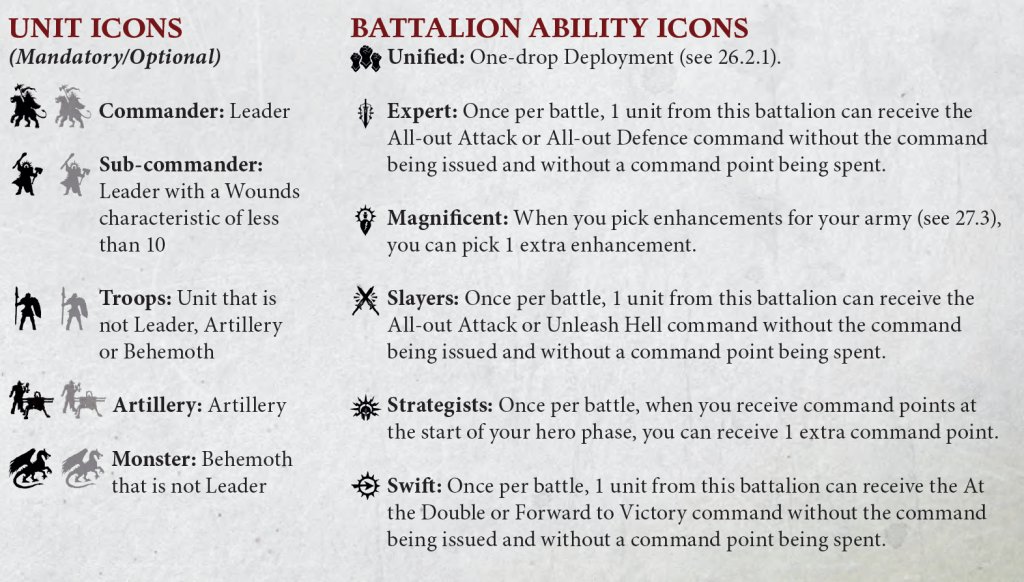 Each Battalion has units filled in for unit roles that are required and faded for optional additions. These are not like Warhammer 40,000s force organisation charts, you are not required to use them to complete your list. It’s not clear the benefit of including optional units in Warlord or Command entourage. Battle Regiment allows you a single drop like Battalions used to do, and Grand Battery, Vanguard and Linebreaker only extend their benefits to those within the battalion so it behooves you to include as many models as possible. Warlord and Command Entourage grant army wide bonuses and there’s not much use in filling it in but it wont hurt either.

Enhancements are the game’s new catch-all for Command Traits, Artefacts, Spells, Prayers, Mount Traits and Triumphs. You get one of each for free (though the rule that every Wizard and Priest can each take one spell or prayer still stands). There are also some new Universal Items, Traits, Spells, Prayers, and Triumphs in the Core Rules to give more choices in addition to their book items. There are some really useful things here and you get one of each when writing your list. We’ll go into them in depth in a few days so stay tuned. There are some real good ones here!

The very last thing which goes on your list is your Grand Strategy. These are something you can pick to suit your army style and are worth 3 VPs at the end of the game. There could be more added in future General’s Handbooks but the core book includes:

If these seem…unbalanced that’s because they are. It’s hard to tell why you wouldn’t take anything but Hold the Line. These are tied to the Battlepack you’re using, so General’s Handbook might include completely different ones. We’ll see soon enough.

Overall I’m pretty pleased with how it feels, and after writing a few lists it’s really not that limiting at all – but I do half expect to see some small changes to unit minimums going forward to allow some of the cheaper Horde options to still remain – like Deadwalker Zombies or Dire Wolves changed with the Soulblight Gravelords book. Good luck going forward and I can’t wait to see what everyone comes up with.

That’s a wrap, come back tomorrow when Ellarr discusses the Hero Phase. It’s huge, you won’t want to miss this! If you have any questions or comments please comment below or email us at contact@goonhammer.com.