A new edition of Age of Sigmar is upon as, and with it comes an exciting new box jam-packed full of awesome new models – Dominion. This set features 60 all-new models, 21 Thunderstrike Stormcast Eternals and 39 Kruleboyz Orruks, and Games Workshop were kind enough to send us a review copy or two to take a look at. 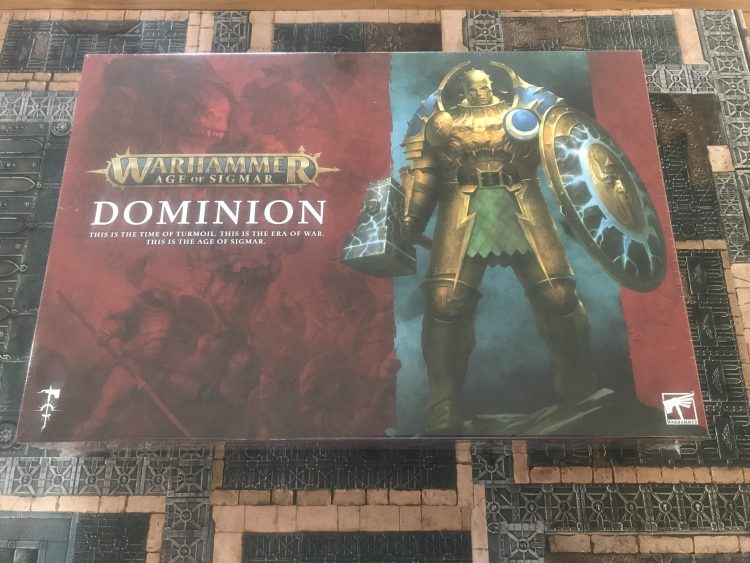 The box makes an immediate first impression – it’s strikingly designed but also heavy, weighing in at a chunky 4kg, which puts it in a similar weight class to the original Kill Team starter set. Opening it up you find it’s absolutely jam-packed with sprues; the sheer volume of plastic here is something to behold, and easily outmatches even last year’s Indomitus box for 40k. If you’re hoping for a hint as to what future releases recycling these will look like, by the way, here’s a list of exactly how the contents are laid out:

What that means is that we’re likely to see sprues A-H turn up as ETB kits, or in the three-tiered starter sets that will presumably come out in a few weeks’ time to mirror the 40k versions, while sprues I and J are likely to get a separate release akin to the “Heroes of the Imperium” or “Royal Court” sprues for Marines/Necrons respectively. It’s probably not surprising this is how it’s broken out; the Killaboss and Yndrasta are the two biggest-ticket items in the box, and possibly the biggest that have been in this kind of box release in general,  and they were unlikely to want to sell them in future as part of a “starter” set (expect the lower-tier characters to take up the hero positions in those, probably the Lord-Imperant and the Killaboss on foot) so it makes sense to bundle those in with some other units for a premium sprue.

As well as the plastic, there’s a copy of the new core rulebook for Age of Sigmar – in box-exclusive format, with some fabulous Yndrasta art on the cover – and wow this is a big, thick book. It has a nice quality feel to it, and though I’ll leave the rules review to others I will say that as a thing in itself this is a great product – some noticeable additions include numbering for rules sections and highlighting of important terms, and very neat organisation of the sections. There’s also some cool personal armies featured, which is always nice to see.

If leaping in with both feet to the core rules and the full range of the Age of Sigmar setting (lovingly documented in an extensive background section) feels like a bit much to be getting on with, there’s a “Start Here” booklet included too, featuring the War at Amberstone Watch, a short summary of the fluff for the box armies. There’s no rules content, however; that’s reserved for the separate Warscroll cards which detail the various units. The cards are nice quality, and also confirm just how much stuff is here – you get over 1300pts of Stormcast in the box, and around 1150 of Kruleboyz. You’re over halfway to a new Orruk horde or over 2/3rds of the way to a Stormcast army with just the contents of this box, which is a frankly unprecedented amount of stuff for a single set like this – the Marine half of Indomitus was around 900pts. I am not much more than Age of Sigmar-curious (I have a DoK army in the backlog which has been stalled out for a while) but I am going to end up with a Stormcast army just based on getting this box, since it should be relatively trivial to reach 2k with only a couple of extra purchases. Better-informed minds tell me the box contents are actually pretty good, too; whether you’d use absolutely all of it in a competitive 2000pt army remains to be seen, but you could at least reasonably put this + a few extras on the table and be fine.

You can find our reviews of the Warscrolls here:

What’s noticeable by its absence here – and again mirroring Indomitus from last year – are any dice or rulers, and any kind of introductory scenario. You might have expected this to be in the War at Amberstone Watch booklet, but that’s purely a fluff book designed to quickly get you up to speed with what the hell a Kruleboy is and why the Stormcast have spent lockdown doing a ton of cardio and slimming down. This is, definitively, not a “starter” for the edition – it’s a big, flashy, and limited splash release aimed at getting a ton of cool new models into players’ hands as efficiently as possible, and kicking off AoS 3.0 with a bang as everyone coos over just how amazing the two ranges are (and they really, really are – as well as the models we’ve been enjoying painting over the last week or so, we’re starting to see other content creators posting their painted models too, and it’s emphasising just how great they look in schemes other than the studio paintjobs).

That pretty much wraps it up for the unboxing – throughout this week we’ll have deeper dives into the new rules from our Age of Sigmar team, as well as painting guides for the box contents from a number of our authors. It’s fair to say that we think this is a fantastic box, and we’re very excited for the new edition – check back regularly to find out why!