Ruleshammer: How do I move an oval shaped base like a Knight or Flyer?

Although we love Warhammer 40,000, the game’s complexity can be daunting, particularly for newer players. In Ruleshammer, we look at the nuances of the game’s rules and how they affect gameplay, clearing up potential issues and helping make sense of some of the game’s less common interactions. In today’s Ruleshammer, Rob “Vre’kais” Chilton covers how to move things on awkward oval shaped bases like Knights and Flyers.

In this week’s edition of thinking way too hard about the rules, the gang discover that turrets don’t even exist and have been a shared hallucination all along.

This week will generally be about moving models especially big things like Knights and Flyers, but when looking into this I found there was something to be said about moving turrets and how 8th has absolutely no rules for them at all. Except that they don’t exist for some parts of the game and do for others, yay.

What are the movement rules again?

Moving a model can be moved in any direction, to a distance, in inches, equal to or less than the Move characteristic on its datasheet. No part of the model’s base (or hull) can move further than this. It cannot be moved through other models or through terrain features such as walls, but can be moved vertically in order to climb or traverse any scenery. No part of a model or its base can be set up or moved over the edge of the battlefield.

The key phrase in all of that though for this topic is this;

No part of the model’s base (or hull) can move further than this. It cannot be moved through other models or through terrain features such as walls

The base of a model is fairly evident (I would hope by now) but whats counts as the hull of a model exactly? We have to turn to the FAQs to answer that.

Q: When a model does not have a base, as is the case with many vehicles, what exactly is the ‘hull’ of the model?
A: The hull of these models refers to the main body of the model. It does not include things such as turrets, sponsons, aerials, banners, spikes etc. If there is still doubt, we recommend both players agree about what constitutes the hull of such models before the battle begins.

This is where the first, “wait what?” moment occurred at Goonhammer HQ (deep in the internet/webway/warp somewhere). Turrets are not part of the hull… but what is a turret in 8th? Before that sounds like a stupid question remember this is a game with giant bipedal killing machines. Does the arm of a knight count as a turret for instance? Generally this isn’t actually an issue for Knights as they measure movement and range from their base not parts of the model. The Line of Sight rules also don’t care about whether things are turrets or not as your unit just needs to be able to see the model, with no distinction that it must be able to see “the hull”.

When do turrets matter then?

Here’s my opinion, and it’s a serious one as there’s a bit of a vacuum here. Essentially I don’t think the rules support you moving a turret mid game, there’s no firing arcs in 8th, there’s no specific rules on what they can or can’t do. As they are still valid for LoS though there’s an argument that rotating them is the much fabled “modelling for advantage” and it’s again my opinion (as there are literally no rules about them) that in this vacuum that not glueing a turret down shouldn’t give a player an advantage. Situations such as spinning a turret to peek through a window. Then drawing LoS for a Leman Russes’ flamers from the tip of its battlecannon is not something specifically supported by the rules. The only example of a model where GW has acknowledged it’s moving parts that I can find is the Space Marine drop pod. It has been FAQed that whatever position the doors are in when you deploy it is their position for the entire game. I don’t think it’s unreasonable to apply that logic to moving parts on other models.

That’s my own opinion though and I would welcome feedback on it! Have I missed something?

What does count as “having moved” then?

Having combed the rules a little, the FAQs, done some soul searching, argued a lot online (seriously this took us like 4 hours to reach a consensus on). This is what I am going to attempt to argue is a definitive set of guidelines that cover all models.

How to measure movement for a Knight

Generally when moving in a straight line with zero toration moving a Knight or any model on an oval base isn’t any different to moving generally. 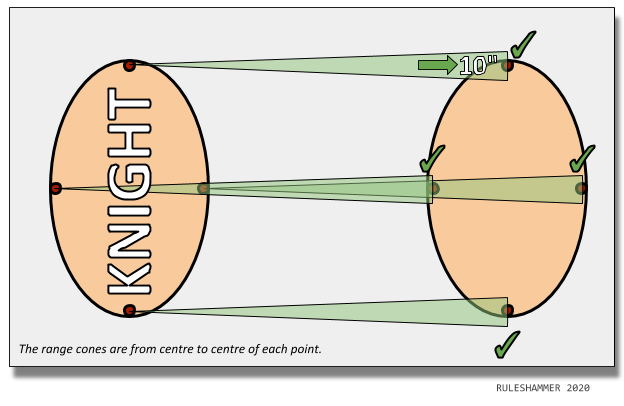 And this works fine for moving diagonally too. 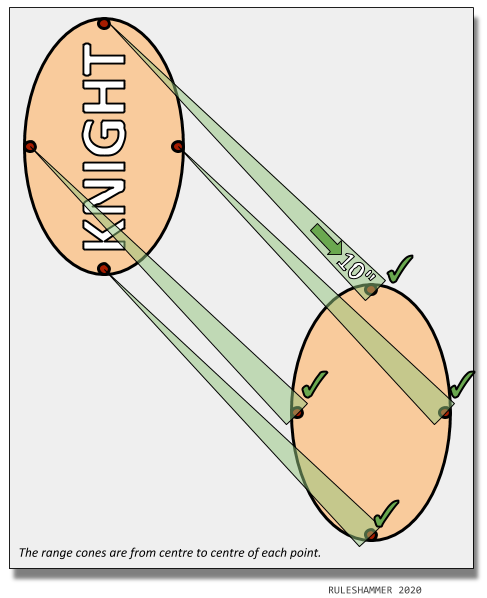 Adding some rotation seems to be where it gets more complex, we need to now keep track of where it started. Using dice as markers really helps to do this accurately but determining the point that will be move the furthest and keeping that below the movement stat works well too. 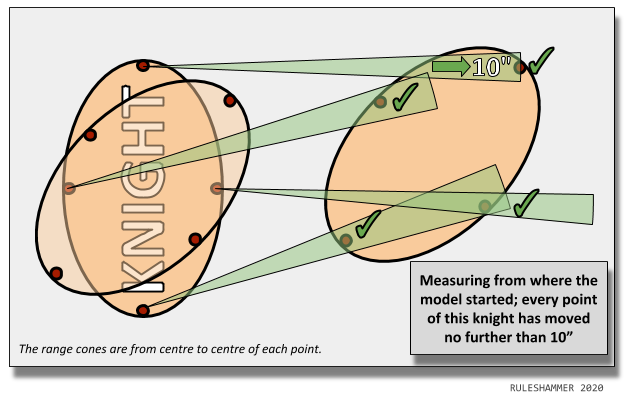 This rotation could happen at the end or at the start of the move but remember that no part of the model can move more than the movement stat on the profile so the example below would be wrong. 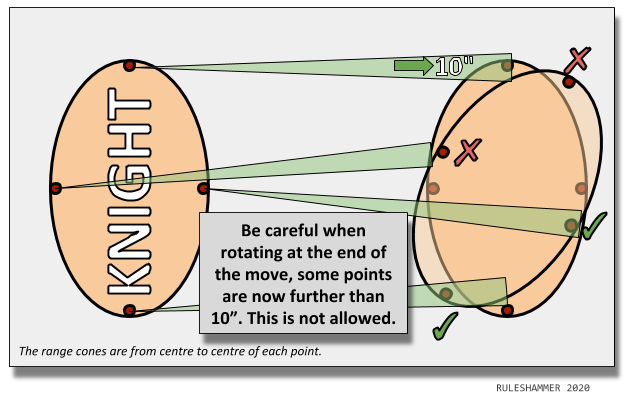 Rotating this way is a really easy mistake to make. Knights and really any model on an oval base really get awkward when moving around obstacles. Here’s how best to measure moving around a small ruin. 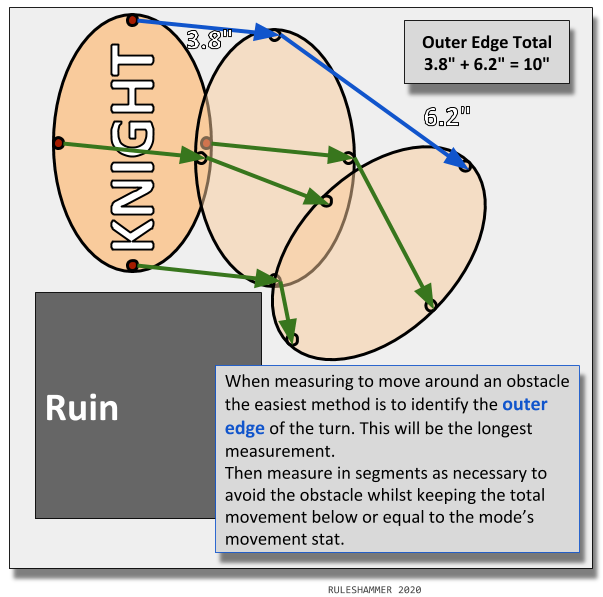 These examples also work well for other large or non-circular bases, units like tanks especially that vary greatly in shape and size.

Flyers are a bit different because most of them have some version of the supersonic rule;

Supersonic: Each time this model moves, first pivot it on the spot up to 90° (this does not contribute to how far the model moves), and then move the model straight forwards. Note that it cannot pivot again after the initial pivot. When this model Advances, increase its Move characteristic by 20″ until the end of the phase – do not roll a dice.

This rule specifically gives you a 90° turn for free before you start the move, and then you measure from that position rather than where the model was at the start of the turn. They also don’t need to avoid obstacles in the movement phase because of the FLY keyword. 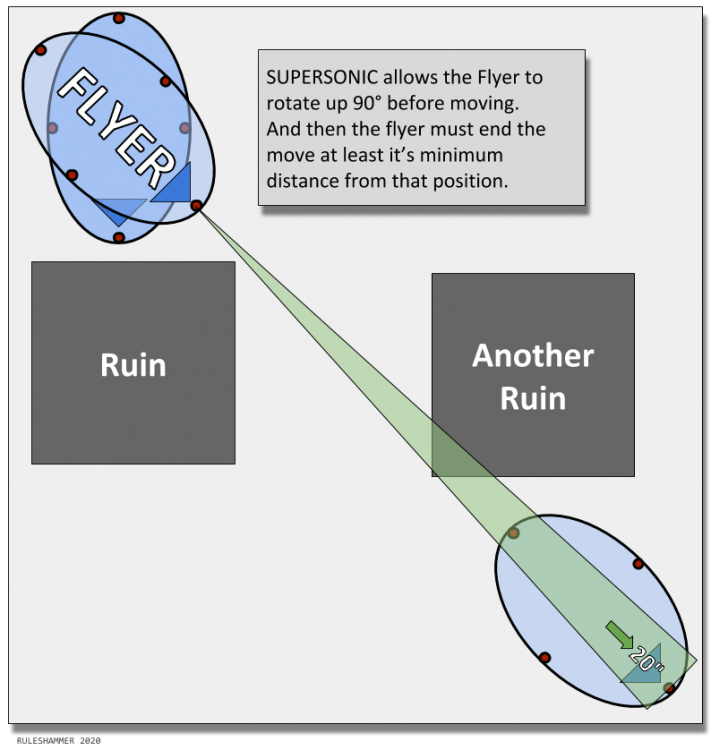 Can I move forwards and backwards with a supersonic unit to count as having moved the minimum?

The short answer is no, in fact any model with a minimum move even if it isn’t limited by the supersonic ruie has a separate constraint stopping this.

Minimum Move Some models that can Fly have a Move characteristic consisting of two values. The first is the model’s minimum speed – in the Movement phase, all parts of the model’s base must end the move at least that far from where they started. The second is its maximum speed – no part of the model’s base can be moved further than this. If a model cannot make its minimum move, or is forced to move off the battlefield because of its minimum speed, it is destroyed and removed from the battlefield – the model has either stalled and crashed or been forced to abandon the battle. [Core Rules 40k Pg3]

So for most flyers it’s not just the distance traveled, they can’t do a 20” loop and get back to where they started because they have to end the move at least that far from their start position. Flyers that have a minimum move but lack supersonic are quite rare; the only example I could find was the Tau Remora Stealth Drone from Forgeworld, but they are still constrained by this rule like the rest.

I hope these diagrams help when moving these larger and far more awkward models. As ever If you want your rules debate answered you can submit questions both on reddit, or via this form. Or drop us a note in the comments below or email us at contact@goonhammer.com.