This article form’s part of Ruleshammer’s guide to the various phases in 9th. You can find the rest linked from the landing page.

Declaring charges is fairly straight forward most of the time. However do remember that this range measurement is base to base (or hull to base), so elevation of the target or if the model measures from it’s hull needs to be taken into account. After this step out of the way though things start to get more complicated.

Before making the charge roll you need to ask your opponent if they are going to Overatch. Some units have abilities that allow them to Overwatch, for most units players will need to make use of the core Fire Overwatch stratagem.

Use this Stratagem after an enemy unit has declared a charge against one or more units from your army. One of the units that was chosen as the target of that charge can fire Overwatch before the charge roll is made.

As a stratagem it is limited to one use per phase, so unless the enemy has any other overwatch abilities once it’s been used you don’t necessarily need to keep checking. Overwatch is a normal shooting attack so you need to follow all the rules a shooting attack would, the targets must be visible and in range, and the firing models can make use of any relevant abilities they might have with the exception of Ballistic Skill.

Certain rules enable units to fire Overwatch at an enemy unit before it can charge. If an enemy unit declares a charge that targets one or more units from your army that have such a rule, each of those units can fire Overwatch before the charge roll is made. A unit cannot fire Overwatch if there are any enemy units within Engagement Range of it. Overwatch is resolved like a normal shooting attack (albeit one resolved in the Charge phase) and uses all the normal rules, except that an unmodified hit roll of 6 is always required for a successful hit roll, irrespective of the firing model’s Ballistic Skill or any hit roll modifiers. In addition, when a model fires Overwatch, it does so at the charging unit. Any rule that states the unit cannot be targeted unless it is the closest target (e.g. LookOut, Sir) does not apply when firing Overwatch.

So you can make use of re-roll to hit abilities and/or modifiers to the wound roll but the hit roll needs to be an unmodified 6 unless taking advantage of a specifically Overwatch altering rule such as Set to Defende for Defensible Terrain.

Overwatch and Look Out Sir vs Bodyguards

Look Out Sir is clearly made exempt by the Overwatch rule.

In addition, when a model fires Overwatch, it does so at the charging unit. Any rule that states the unit cannot be targeted unless it is the closest target (e.g. Look Out, Sir) does not apply when firing Overwatch. [Core PDF pg20]

However rules like the Cryptothralls, and others like Old One Eye’s Alpha Leader are not “unless it’s the closest target” type rules. They simply cannot be targeted whilst near the required unit. As such, based on current RAW Overwatch does not allow a model to ignore these abilities. Sometimes this will make sense,  as picking out Old One Eye from a pack of other Carnifexes would be harder than picking out some of the fancier looking Necron Overlords from a sea of normal Warriors. I guess for Crytothralls the effect is created via techno-sorcery for the mean time.

While we’re on the subject of Crypteks there are still some non-Look Out Sir effects that prevent a unit being targeted unless they are the closest eligible target, such as the Prismatic Obfuscatron Cryptek Arcana.

PRISMATIC OBFUSCATRON Unless the bearer is the closest eligible target, enemy models cannot target it with ranged attacks.

Because these use the “unless they’re the closest” wording that is called out in the rule above, you can fire overwatch at these even if they charge from behind another unit.

To make a successful charge, you have to meet the following criteria once your charge move is completed: 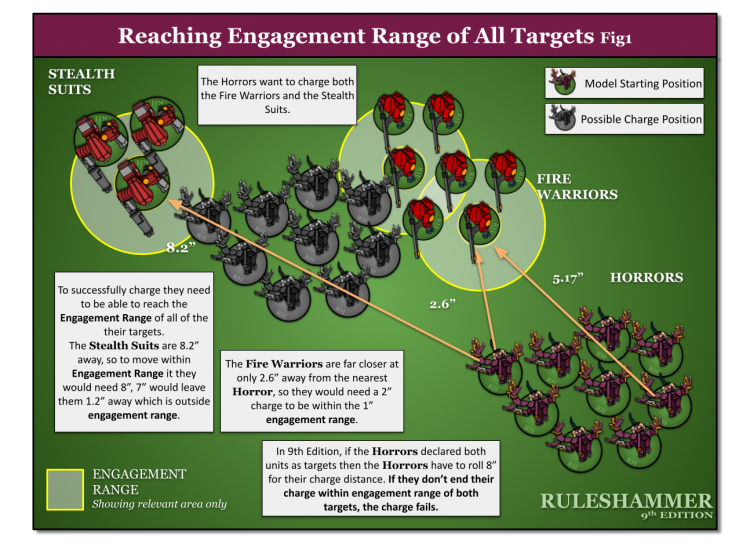 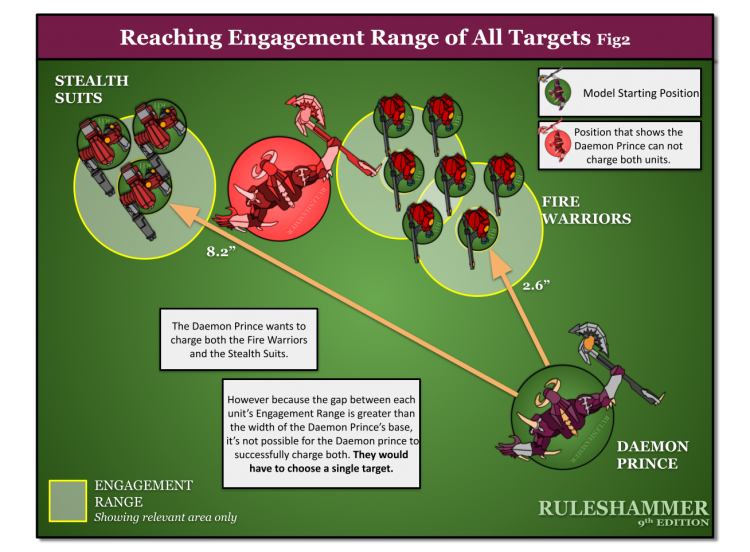 To make a charge move, the unit’s charge roll must be sufficient that it is able to end that move in unit coherency and within Engagement Range of every unit that was a target of its charge, without moving within Engagement Range of any enemy units that were not a target of its charge. If this is possible, then the charge is successful and the models in the unit make a charge move so as to fulfil the above conditions. [Core PDF Pg19-20, Book Pg224]

I think the bullet points for this rule could have made it clearer, but some of these bullet summaries aren’t entirely helpful it’s not too surprising. What are the above conditions?

You need to make sure that you’re only declaring on units that you can reach, and that your models have enough coverage to engage all of them.

This limits smaller combat units with the ability to fight multiple times (as in be activated again not just make more than one attack), as you can’t charge into one thing, wipe it out and then consolidate into another targets and fight again.

FLY in the Charge Phase

If a unit’s datasheet has the FLY keyword, then when it makes a charge move, its models can be moved across other models (and their bases) as if they were not there, but they must move over terrain features (including BUILDING units) like any other model. A model that can FLY cannot finish any move on top of another model.

Unlike the FLY rule as presented in the movement phase this one lacks specific mention of being able to ignore Engagement Range of enemy models when using FLY to go over them. However there’s a Rare Rule in the Core FAQ that expanse on the concept of “as if they were not there”.

Moving Through Models
Some models have a rule that enables them to ‘move through/ over models’, or ‘move through/over models as if they were not there’. Sometimes such a rule will only apply to specific types of movement (e.g. Normal Moves, Advance moves, charge moves etc.) while other times it will apply to all types of movement. In any case, when moving a model with such a rule, it can be moved within Engagement Range of enemy models, but it can never finish a move on top of another model, or its base, and it cannot finish a Normal Move, Advance or Fall Back move within Engagement Range of any enemy models, and it can only end a charge move in Engagement Range of units it declared a charge against that phase).

Essentially this means FLY works the same way it does in Movement phase EXCEPT that you can’t ignore vertical movement to cross over terrain features. Remember, however, that if the FLY model has the INFANTRY keyword and the terrain is Breachable then it can still move through the walls as usual.

Charging Aircraft seems to be (and mostly is) against the rules when you first read them. This section of the AIRCRAFT rules is why.

As models can’t end within Engagement Range of them when making ANY kind of move, with no exception for models that can Fly. GW addressed this with a recent FAQ which I talked about earlier in the week.

On the one hand, yay they confirmed that Aircraft can be charged by flying units. Any sensible pregame discussion was coming to this conclusion in my opinion and it absolutely still should regardless of what I’m about to say next. They went and tied this rule to the presence of rules such as Airborne. This on the surface might seem fine, it’s when you get to things that have a hover mode rules that it gets silly again.

Hover Jet: Before this model moves in your Movement phase, you can declare it will hover. Its Move characteristic becomes 20″ until the end of the phase, and it loses the Airborne, Hard to Hit and Supersonic abilities until the beginning of your next Movement phase.

By losing Airborne it loses the “such rules” that allow it to be charged. All that being said, forget I pointed this out. It’s really pedantic and if anyone tried to play with this interpretation seriously I would laugh.

How Vertical Range can be weird

Similar to coherency and engagement, Heroic Interventions get a 5” vertical distance to their trigger range, so that you can heroic if an enemy tries to hide on the second floor. Because you still have to end the move closer to the nearest model, this can cause some slightly odd effects – an enemy 2.9” to your left and 4.9” up is going to be further away than a model 3.5” to your right on the same level, so the presence of the first once can allow you to heroic into engagement of the second. 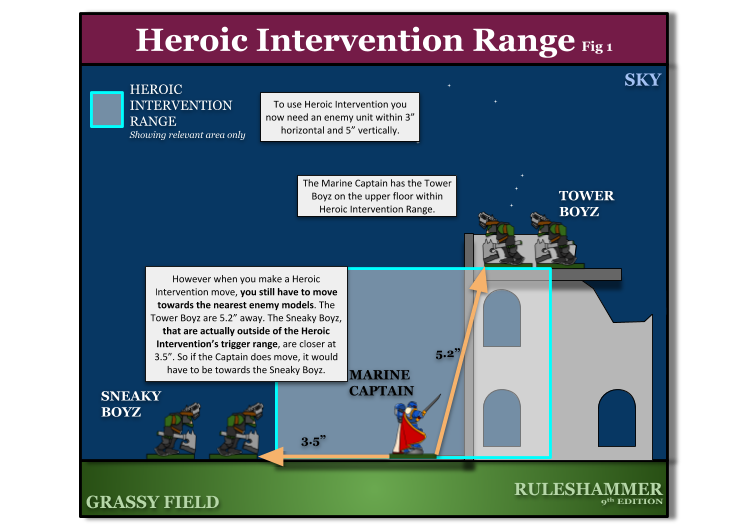 Realistically this will almost never come up, but it’s worth being aware of.

Charges down can be longer than Charges up?

Okay first lets diagram out this scenario to make it clear. 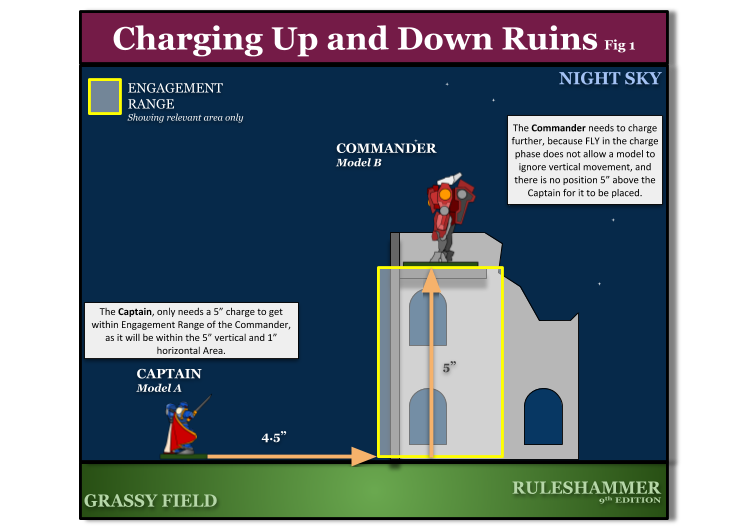 Charging down from a Ruin that’s 5″ or less tall is a longer charge than charging into one. This is because a model on the ground trying to charge in can accomplish this by simply reaching the ground floor, but for the model in the ruin to charge out, they’ll have to move down. In fact in the diagram above the Crisis suit has to charge even further than your example because it lacks the INFANTRY keyword so it can’t ignore and pass through that section of wall in front of it and would have to use some movement to go over it. Even if it were INFANTRY, however, it would still need a 9″ charge (8″ would get the Crisis suit to 1.5″ which is too far away).

NOTE: This reduced charge distance also has an impact on the charge roll required by a unit that has entered the board as reinforcements this turn, it’s entirely possible for two units to be more than 9″ apart diagonally but only require a 7″ charge to enter Engagement Range.

One of the more contentious elements of the charge phase is charging through walls, terrain is a pretty abstract thing in 40k but there’s a whole set of interaction here that stretch the imagination. Oddly enemies “coming out of the walls” is the least confusing one. 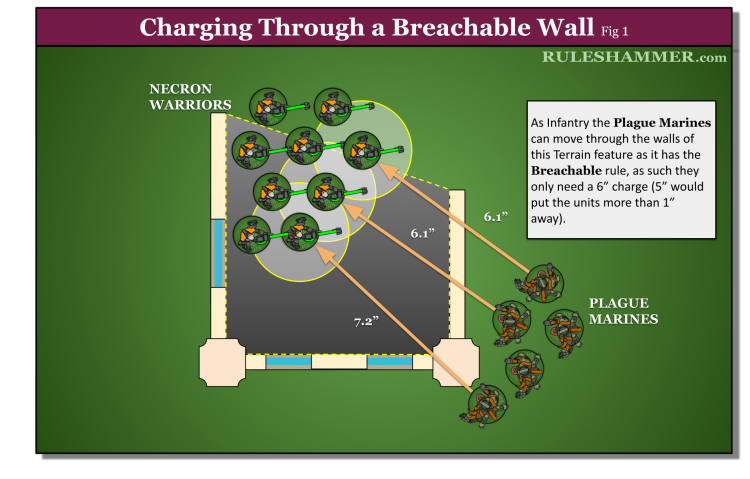 Pretty straight forward, however there’s another scenario to consider if your opponent is rather precise with their model placement. 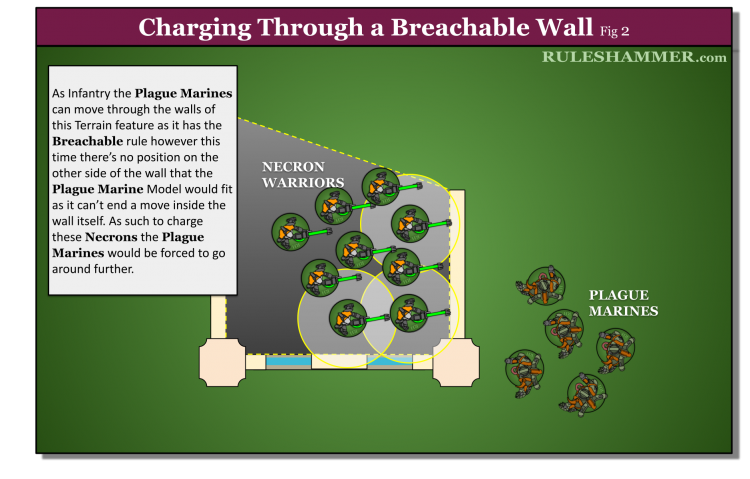 And finally the opposite situation where the Necron player has not considered the reach of Engagement Range from the terrain. 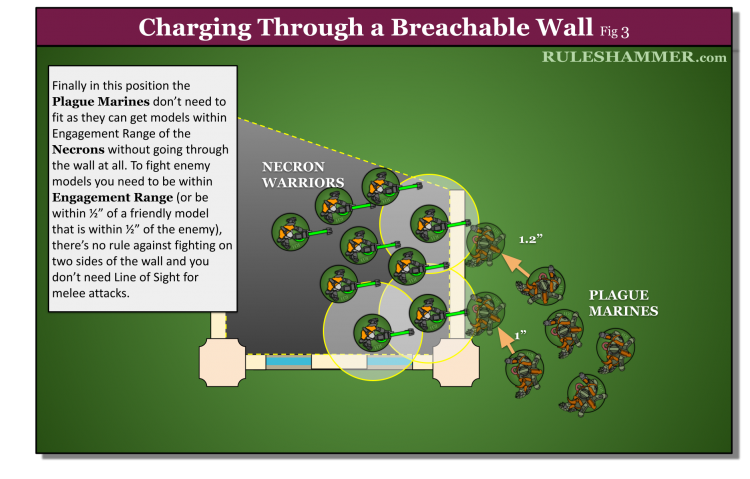 Out of Sight Charges?

When doing an overwatch, does the weapon I’m using have to be in range of the charging enemy. The question is about grenades. – Hubert

Yes, Overwatch is a shooting attack. The only thing special about it is that rather than use your units Ballistics Skill it usually only hits on an unmodified 6 (though that can of course be changed by other rules).