On October 3rd, I was able to hoist another US Open trophy in New Orleans.  But even more important than the elation and satisfaction of winning the tournament was the positivity surrounding the final match on social media.  In particular – and to my delight – the community discussion has centered on the moment in which Brad Chester allowed me to place my unit of Pteraxii Sterylizors onto the board after the reinforcement step of the movement phase had ended on turn 3.  Brad was well within his right to say that they were destroyed and net himself a further point on the No Prisoners secondary.  But instead, he insisted that they brought onto the board wherever I would have placed them. (Editor’s Note: You can find the stream of the game here).

This was the final match of a prestigious Games Workshop super major event with considerable ITC points on the line and the legacy of having the winner’s name engraved on the massive Thunder Hammer.  But without hesitation Brad insisted the Sterylizors be brought onto the board, where they could then proceed to clear out his backfield objective holders and take control of his precious homefield objectives in the final two turns, almost certainly tilting the game in my favor.  Are we teammates on the Art of War team?  Of course, but anyone who knows Brad—and if you have been in the Warhammer 40k competitive scene you know this man has been playing and winning events since the inception of Warhammer—will tell you that this is simply how he plays at an event.  From top table championship matches to round one matches against new players, being a gentleman and putting being a good sport before even winning defines Brad as a player. 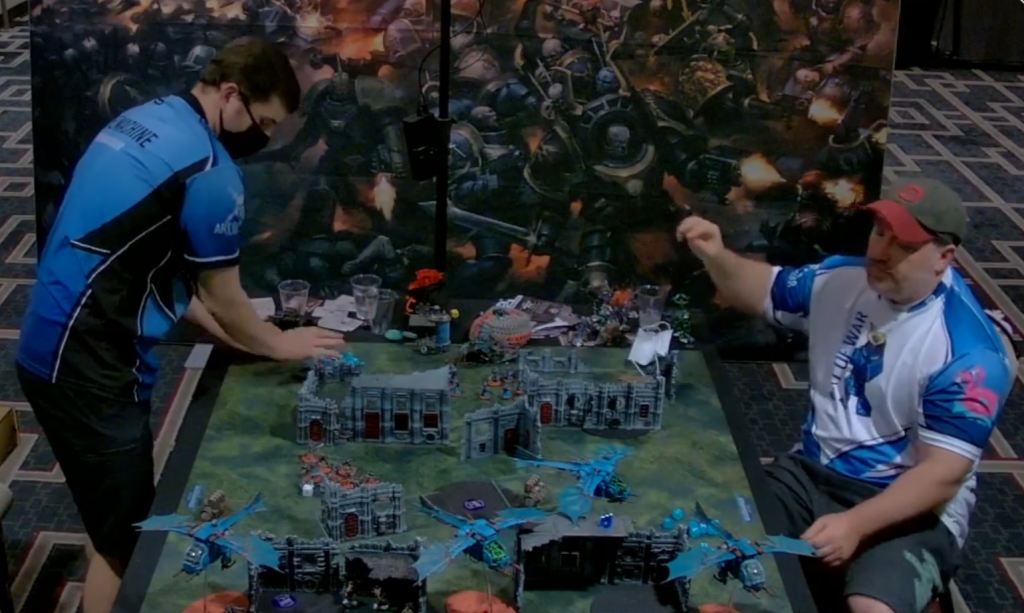 I responded in kind.  Instead of using the Pteraxii as I would have wanted to clear out his backfield and take away the sticky objectives he held on Sweep and Clear, I placed the Pteraxii in my backfield on the literal back edge of the board where they would not impact that turn.  If I was going to win this final match after making this mistake, the Pteraxii would not play a central role and I would instead have to use the resources I had left on the board as if the Pteraxii had died in reserves anyway.  I thought this a fair compromise in which the sportsmanship cut both ways.  I accepted Brad’s generosity in allowing the Pteraxii to live, but did not take advantage of it by completely changing the game state and swinging the game into my favor.

We ended up playing out an insanely close game on the WarhammerTV stream in which I barely pulled out the win against his Drukhari onslaught, winning by a margin of only two points!  Even with moments like an Archon surviving the brick of 10 rustalkers and swinging back to wipe the entire unit in return, Brad’s moment of sportsmanship received all the accolades.  One Reddit commenter describing the match highlighted “some epic sportsmanship where the Drukhari player (Brad Chester) let Richard bring on a unit from reserve ‘out of phase / after it was too late to’ because obviously it was an innocent mistake. Richard bought the unit on but just put it in his own backfield so as they wouldn’t affect anything too much offensively. (They would have counted as being destroyed otherwise and scoring secondary points for Brad).” 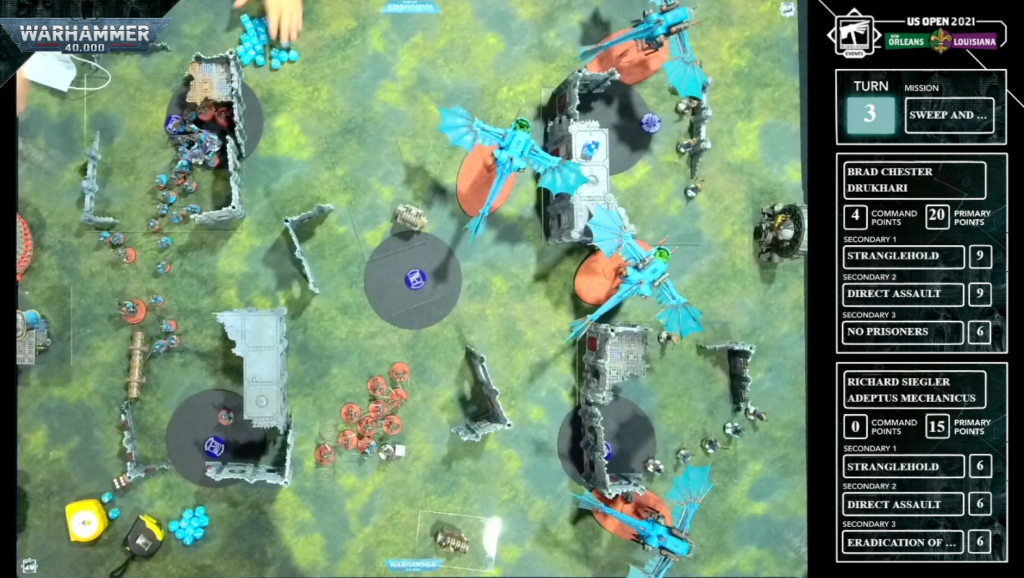 In the same thread another poster approved, saying “Sounds like good sportsmanship all around. Kudos to both for not taking it too seriously.”

This, in my opinion, is the best possible outcome for a streamed major tournament – enjoying not only the match itself and the decisions being made but also how the players represent the competitive community, themselves, and the wider hobby.

I have found myself in Brad’s shoes in finals and other major events and every single time I have prized being a good sport over “gotcha” plays, rules lawyering, or punishing innocent mistakes in the heat of a match.  And while the stigma exists that such behaviors rule the top tables of competitive 40k, my personal experience since my competitive story began in 2019 has been the opposite.  I have seen time and time again players prioritizing sportsmanship.  At the final round of the Pro Tabletop Open event in Atlanta (December 2019) with $10,000 on the line, Nick Nanavati reminded me that my fusion Coldstar Commander was in melta range and so would roll 2d6 when determining damage.  He did so completely unprompted and with hard cash and a superbowl-style ring on the line in the final, crucial turn of the match – he prioritized sportsmanship.

Just the other weekend, I played against Goonhammer’s very own James Kelling in the Las Vegas Team Event in a round pitting two of the best teams in the country against one another.  Instead of a tense affair, James was a gentleman helping me position my Admech rangers so that I could maximize line of sight and range to one of his Drukhari raiders.  I returned the favor when at the beginning of his turn, James realized he had Advanced a unit of wyches off his homefield objective the previous turn and never moved the unit of Wracks in his backfield onto it, meaning he would earn the deadly 0 points for primary that turn in a tight Drukhari vs Admech match.  I said “no worries” and let him roll the Advance to make sure the Wracks would have made it there and we continued playing.  The same exact thing happened at New Orleans, where in the first match against Ryan Snyder he had shifted a Caladius Grav tank to get range of my Fusilave, but in doing so accidentally took it off his home objective.  We realized the error as we went to score and I said “no problem” and we bumped it back into position, where it was touching the objective and still had the range to reach the flyer.  No big deal, even though it was a tight round two matchup with two strong players and lists.

I wanted to write this article to highlight just how common it is and how many top players have adopted a similar mindset on the importance of sportsmanship to playing competitive Warhammer.  When I play, I want to win a game because of my decision making throughout the match and because of the energy put into the list design and practicing of that list.  I have zero interest in winning on a technicality, or because something that should simply happen was forgotten about for a moment.  Among the top players who I have had the pleasure of meeting, playing against, and conversing with at major tournaments since 2019, I can say that this has been par for the course in my journey from doe-eyed competitive hopeful in 2018 to ITC Champion in January 2020.  This spirit of sportsmanship is one of the main reasons I have continued to enjoy competitive Warhammer so much and stuck with it as my main outlet for fun.

For the more casual among you, or you semi-competitive players who have always wanted to try playing at a local RTT or in a 5-round GT, but have been put off by the high publicity incidents of poor sportsmanship, stories of stressful rules lawyering, or “gotcha” plays, and the stigma that a WAAC (“Win at all costs”) mentality dominates tournament play, I would encourage you to sign up anyways.  The vast majority of the tournament scene is made up of people just like you: People who are giving up their weekend, often traveling great distances, and spending good money to enjoy their hobby with like-minded individuals in order to be part of the community experience in which Warhammer truly shines.  If Nick Nanavati, Brad Chester, myself, and dozens of other top players can prioritize sportsmanship at the top tables in tournaments with real prizes at stake, there’s no reason the competitive community cannot ensure that tournaments are the most welcoming and supportive for players of all different skill levels and experience.  That at the end of the day tournaments should be fun, not a stressful chore.

“Competitive” is not simply a stand-in for “winning.”  Competitive is a mindset of wanting to challenge yourself, your decision making, and your list building, but also how you treat your opponent and the respect you demonstrate for the game, the players, and the wider community.  These streamed tournaments are an amazing opportunity to share Warhammer 40k with the wider gaming communities on places like Twitch and Youtube.  And I feel it is absolutely essential for those of us fortunate enough to play on stream and at the top tables to represent the game to this wider audience in the best possible light.  This is how the game will continue to grow at such a rapid pace and invite all kinds of new people into our community by highlighting how even the most competitive spot you could find yourself—top table at a super major—is a friendly, fun, and welcoming space where being a good sport is valued above simply winning a match.  If you have always thought about going to a tournament, but have not done so, I hope this article encourages you to join the fun!

You can find more content from Richard Siegler and his teammates on the Art of War website.