Oh no, the good writers are busy again, and with all these new models to gawk at! How very dare they leave our readers hanging like this. Guess it’s time for the Kid’s Table to ride once more into the fray, this time with our signature deep-dive into very serious journalism about Pariah Nexus. We’ve enlisted the powers of Condit (interests: Titanicus, Iron Hands) and Greg (interests: Posting), who aren’t very good at this, but they’re doing the best they can, so please go easy on them. We’ll take you through all the highly-anticipated contents of the box, starting with the Necrons. 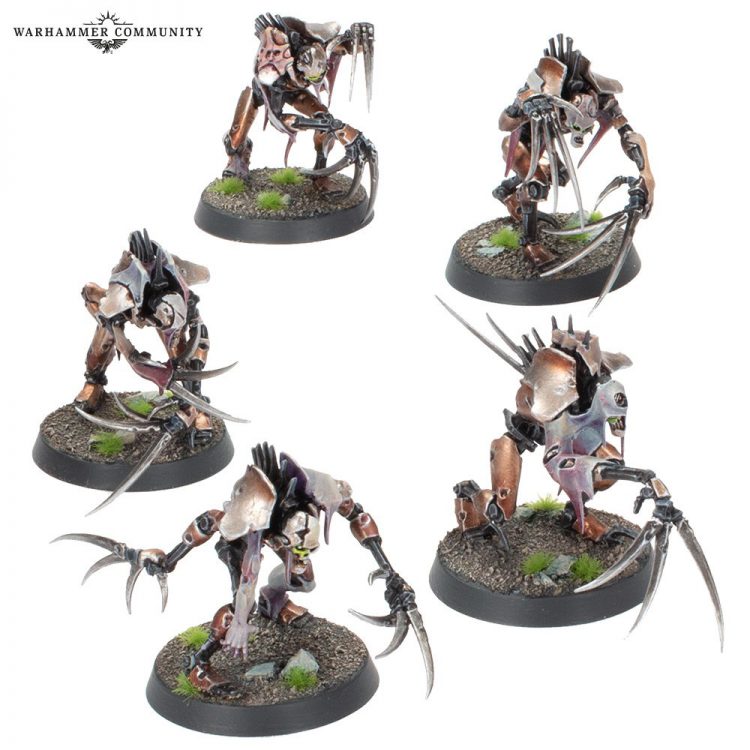 Condit: Finally, a unit that can complete the Ice Sculpture action agenda in my custom Crusade campaign rules.

Greg: Flayed Ones finally get theirs after a decade of underwhelming models. The idea of a skeleton Buffalo Bill robot should be terrifying, but the models have never been anything other than doofuses with all the gravitas of your granddad putting deli meat on his face at a haunted house. Conceptually they’re always going to be pretty dumb, but at least the models are cool now.

Condit: These guys are like the Ork Kommandos of deranged Necrons. It’s like they played Mission: Impossible for the N64 a few too many times and one of them woke up one morning and said “Guys, what if, instead of using a Facemaker, we just took their faces” and the local Phaeron was like “GOD fine, whatever, just leave me alone.”

Greg: I’m sorry, are you implying that you would ever say anything except “yes, amazing” to a berzerk robot with sword hands?

Greg: Imagine trying to rank these bad boys up. Just picture how you might have to rotate their big stupid arms to get them into base to base with anything. 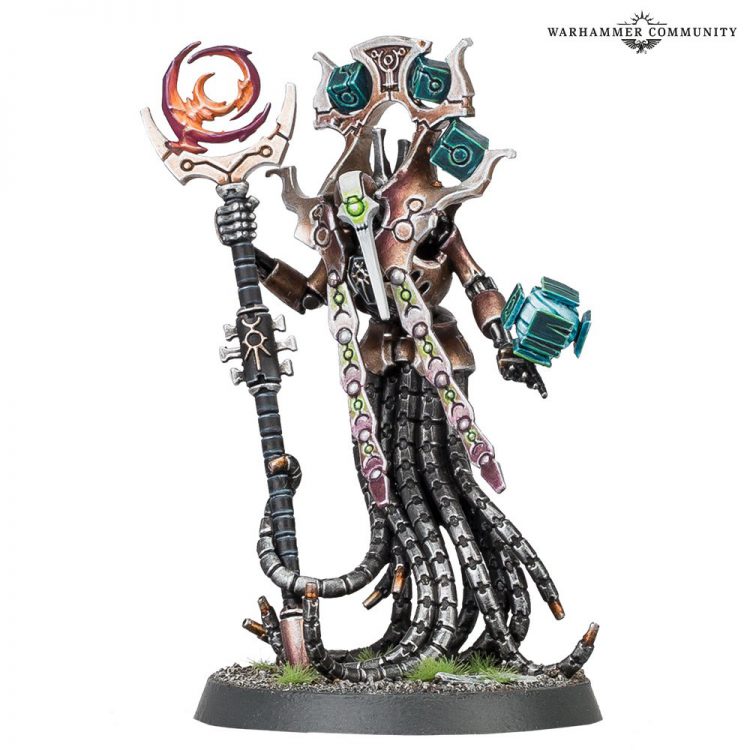 Greg: It is TIME WIZARD with LONGEST CHIN and DICE in their HAIR.

Condit: Does the length of a Cryptek’s chin correlate to how strong of a space wizard they are? If I convert this one to have a longer chin will it improve their special abilities?

Greg: Pretty messed up that he isn’t stroking his gigantic metal beard with one of those tentacles. Necrons spend 60 million years in lockdown, grow these incredible quarantine depression beards, and then they can’t even pensively run a tentacle through it.

Condit: That’s because it’s not a quarantine beard, because we all know that stroking a quarantine beard is the only reason to have one. Clearly it’s a playoff beard, and the Crypteks are still in the hunt in the longest final ever.

Greg: I can think of worse playoff ringers than a sorcerer who can control time. Yes, you could use that power to get mulligans on all your airballs, but the real juice here is after your Flayed Ones put an Intercessor on a poster, you can rewind to see it over and over until it stops being hilarious.

Greg: His dice cubes are the box from Hellraiser but each one just shows you a time in your past when you said the wrong word during a presentation or dropped an ice cream cone on your shoes. Incredible psychic damage output.

Greg: I think it’s worth pointing out that this is the only Necron in the entire boxed set that has a ranged attack. The Necrons all brought knives to a gunfight, which historically has gone very well.

Greg: I come to you now with important news: the Chronomancer kit includes swappable chins: 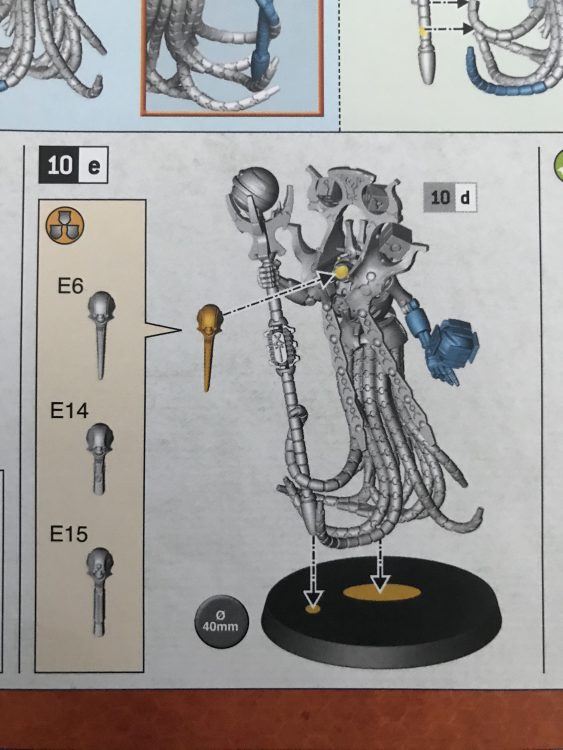 Greg: Dagger-chin is pretty cool, but I think I’m going to have to ride for part E15, which looks like it could be used as a Chaplain’s crozius with zero modifications.

Greg: Doesn’t open or close. This is actually a wall.

Greg: Then again I guess when you can phase through solid matter anything can be a door.

Condit: You just have to believe.

Greg: The Sims 40,000 expansion pack continues the trend of creating unescapable rooms to cry in and eventually starve to death.

Greg: If this had like six little legs on it I would legit believe it was an actual unit. It’s the Necron Gonk droid.

Condit: Somebody’s gotta scoot around to clean up after the Flayed Ones when they go on a shopping spree. How do you think they keep those blackstone floors so shiny and clean?

Greg: The Necron Roomba just whirring around your floors, annihilating dust and cat hair with gauss blasters. It works great until it runs over a bit of Eldar poop and smears it all over the place.

Greg: These look like the seeds that Monoliths grow out of. There’s a lot of them, so expect a bumper crop of giant hovering pyramids next harvest season.

Condit: I’m personally looking forward to the Duolith kit that will be releasing with the next set of Campaign Books in Q4 2021.

Greg: I want to know how big these are, so I know how many of these sets I need to buy in order to have enough to glue them together into a Monolith-sized pile.

Rob: I am extremely here for watching our authors being forced to riff on what is basically a bunch of green crates because the Necron half of this box is about ten points worth of Flayed Ones.

Greg: Dude it sucks, and I absolutely regret trying to make this bit work with it.

Greg: What do you think is inside the crates, and assuming it’s some kind of slime or goo, would you stick your head in and drink from it, or are you a coward?

As an added bonus, here are the “assembly” “instructions” for the 48 Necron Terrains, which are inarguably the star of the show. They are incredibly necessary. 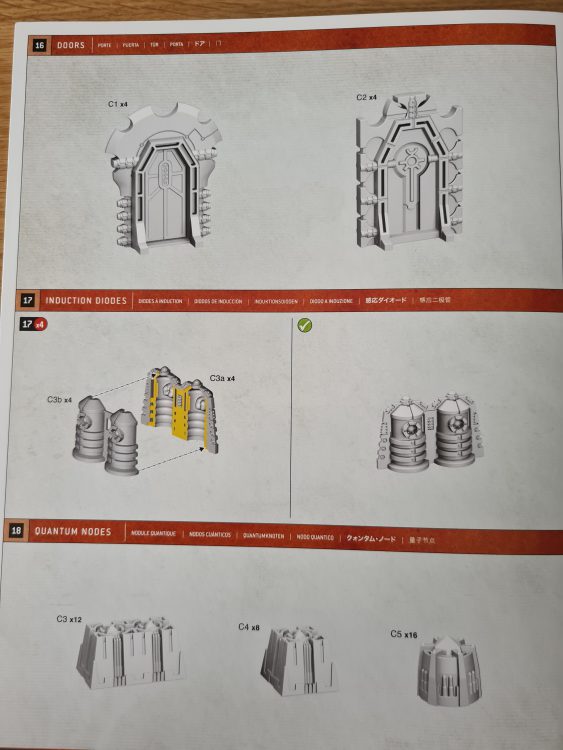 Greg: There’s six different terrains here, and five of them are assembled by cutting them off the sprue. The sixth form of terrain, the trash can, is two pieces. It rules, and this is instantly my favorite page of warhammer instructions I have ever seen.

Condit: I have to wonder what prompted this. Was there a backlash from prior sets that didn’t explicitly tell players to remove the pieces from the sprue before play? Was there a rash of Kill Team: Arena games being played with bits of runners attached? Did the FAQ inbox get slammed with questions on how you’re supposed to play out-of-the-box Kill Team when all the pieces are stuck together?

Greg: This is literally, unironically, the same level of detailed build guide as we get from Forge World.

Condit: Honestly, it’s better, because it actually shows you 100% of the necessary steps.

Rob: Forge World instructions definitely have that “old drawing guide where step 1 is draw a circle and step 2 is draw the entire bird” energy. Or they would, if your dickhead friend who gave you the Warhound bothered to give you the instructions with it.

Greg: The best part is that the painting guide would be similarly terse. No one paints terrain, and no one paints Necrons, so if any of these catch so much as a spray of leadbelcher I’d be shocked. 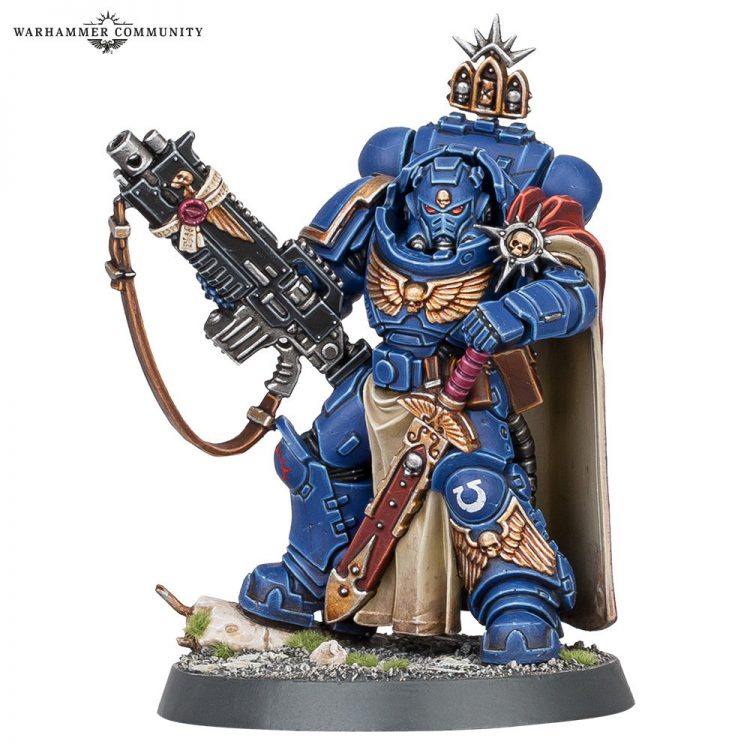 Condit: My favorite part has to be the World’s Tiniest Hero Rock here, as though they got halfway through the design process and realized “ah shit we forgot to put anybody on a rock” so they had an emergency meeting that resulted in deciding to just rotate this guy 5 degrees in CAD and shove a pillar under his boot.

Greg: I do actually love how incredibly sick that gun is. The XXL Bolt Rifle is one of the cooler space marine weapons, due to how it shoots the highest number of the hugest bolts, and his super-casual pose is great.

Condit: Very strong “I heard there was a brawl going on here, thought I’d poke my head in” energy.

Greg: It’s a shockingly relaxed posture from a guy who could easily solo the entire Necron half of this terrible box set.

That’s it, that’s all the space marines.

Thank you for loving the Kid’s Table. We know that we are providing a valuable service, and you are welcome. Please do not leave any comments, or email us at contact@goonhammer.com, unless it’s to tell us how good we are at this.