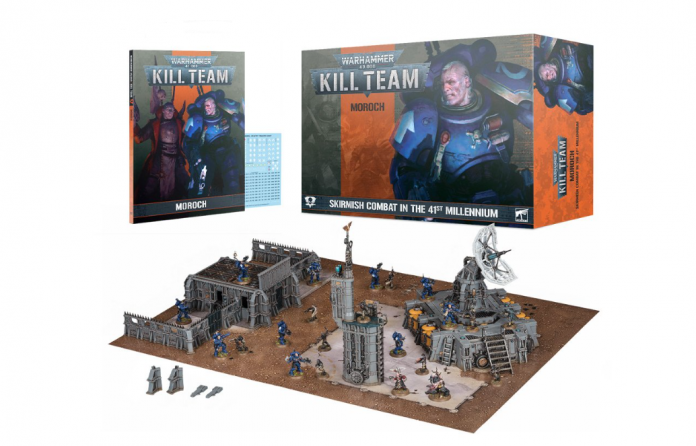 Kill Team Moroch releases next week, with two new kill teams, new matched play and Spec Ops rules, and a load of terrain. Today we’re sitting down with the box and talking about the contents and, in particular, the new models for the Traitor Guard that come inside it.

Before we get started, we’d like to thank Games Workshop for providing us with a preview copy of the boxed set for review purposes.

Let’s start with the box overall: It’s large. In the spirit of recent releases like Kill Team Nachmund, Chalnath, and Octarius, this is a big box packed with a lot of models. There’s also a rulebook for Moroch with rules for each of the two factions inside. We’ll have reviews of those rules going up shortly, in separate articles.

The bulk of the plastic contents in the box are terrain. Specifically, about 3/4 of the terrain from the recent Battlezone Fronteris – Nachmund boxed set – you get the landing pad, a hab bunker, some fences, a comms tower, and a satellite dish. For more on the terrain, you can find our review of the Nachmund terrain here.

As well as the rules, the Kill Team Moroch box is full of shiny models. 10 of them are Incursors/Infiltrators for the Space Marines, with an upgrade sprue full of fun little greebles that fill some gaps in wargear added to their datasheet in Vigilus Alone, and those are fine if you’re into such as “Space Marines.” The real gold in this box isn’t about the transhumans in power armour, though; the exciting bit is the new Traitor Guard – or as they are here, Militarum Traitoris.

“New” comes with a couple of qualifiers here, of course. Two of the models are not in any way new: the Traitor Enforcer and Traitor Ogryn are the ones you remember from Blackstone Fortress, unchanged from their previous incarnation in that game. They remain awesome.

Using Kill Team as a way to get models like this back into circulation is a smart move – plenty of people missed their relatively short existence as a BSF thing, and they don’t currently fit into mainline 40k, but they’re the exact kind of deal where Kill Team’s list-building format provides a perfect way to give them something to do without having to commit to releasing a whole Traitor Guard line.

The other qualifier on “new” is those Traitor Guard models themselves; BSF also saw a bunch of these released. Unlike the Enforcer and Ogryn, though, the Traitor Guardsmen are an all-new multi-part kit, with a wealth of different options that just don’t exist for the BSF versions (which are, basically, just 7 sculpts with a couple of weapon or head swaps available to them).

They also kick ass. Their basic uniform is a straightforward copy of the Cadian one (they’re Traitor Guard, after all) , but putting one of these next to the classic Cadian sculpts really demonstrates the gigantic strides that GW plastics have made over the last 20 years. All the detail is sharper; there’s none of the gorilla hands and blocky silhouettes of the Cadian Shock troops. The bits that aren’t shared with Cadians are all the Chaos greebles – stars hang from belts, tattered banners fly from spiky trophy racks, gaps in broken armour are filled with chainmail. It’s a great marriage of aesthetics, and subtly different to Chaos Space Marines which largely don’t look like Imperial ones – those guys have had hundreds or thousands of years to modify their wargear and create a unique, baroque aesthetic of their own, or are still wearing stuff long since out of use in an Imperium which can’t maintain it any more. The Traitor Guard are trying, but they’re clearly patching things together from what they can scrounge up wherever they are. It’s a martial but ragged look that will be familiar to fans of Necromunda.

You get 10 in the box, with two sprues of what looks like a standard Traitor Guardsmen kit and then an upgrade sprue similar to the one for their Phobos boxmates, which contains most of the bits you use for building your specialists. Splitting the two things out is probably a good indicator for the future of these kits when they’re released separately, but it also helps to keep the sprues a lot neater – the worst feature of the kits for both the Ork Kommandos and the Corsairs is that they are packed to the gills with stuff and have clearly been organised to facilitiate Maximum Stuff instead of easy usability, leading to models being built from parts strewn all over the place. That isn’t the case here; your two core sprues cover building the guys, with parts mostly kept together logically (the chest pieces aren’t with the legs they go with, but are all placed together, so they’re still easy to find), and then the upgrade sprue segregates the majority of cool toys onto a separate place of their own. As a result these are much easier and more pleasant to build than some of their predecessor Kill Teams.

Whether these are “true” multiparts or not depends on your point of view; the base model in each case is a back + legs piece that fits with a single specific chest piece, so in terms of the core body you’re pretty much stuck with what you’ve got. The arm joins are flat, though (there’s little guide nubs but they’re trivial to remove) so you can easily match any other flat arms to these kits – they’d mix well with GSC or the Hive Scum guys from Necromunda. The heads have sculpted necks to fit a certain way and look in a particular direction, but again they’re trivially removable to allow you to repose the head or use different ones.

As covered in our rules review, the team has a lot of specialists available, and puts down a lot of guys generally. You can build a complete team just from one box, because although you have 14 slots the Enforcer and Ogryn count as two each, but you will end up with restricted choices. Building purely to the instructions, you have four base models which build 3 different options (one of which is always just “Trooper”):

There’s five more dual options, and just one that builds only a Trooper. Whether you actually want all the specialists is an open question, of course, but if you want to have the full range of options available and some spare Chaos Joes to go with them, you are likely to be looking at a second box. If you are so inclined, however, and have them laying around, you can also bash this kit pretty effectively with the BSF push-fits, and luckily our own Fowler is exactly That Kind of Guy and has done so. I’ll let him take you through his process below, but as a final word from me – this kit is a massive success. I enjoyed building them a lot, and they’re in the sweet spot of GW models where if you just paint the guy as-is they can be done simply but effectively, with sufficient cool details to add some interest to each guy but not so much the model starts to get lost. If you are so minded though they’re great canvases for little personal touches – there’s nice open spaces on the chest plates and shoulders where one might add some Chaos stars or battle damage if so inclined; probably not the kind of thing you’d do in a putative 40k Militarum Traitoris army with dozens of the things knocking around, but exactly what someone putting together a small Kill Team as a painting project might want to do.

Fowler: I’ll echo Corrode’s glowing review here – this is one of the best GW kits I have built in a very long time. Necromunda fans are likely waiting for a few magic words out of this review. Not only does this serve to provide a solid base for a Chaos Cult gang, it immediately takes over as the single best kit for Necro kitbashing by a country mile – in my humble opinion. Not only does the box have 40ish heads, it’s got a pile of pistol and close combat weapons, four special weapon options (melta, grenade launcher, flamer, and plasma gun), a bolter, obviously a stack of lasguns, and plenty more fun gubbins.

As mentioned earlier, these bits are super compatible with ranges that have guard-ish torso sizes. Intrepid kitbashers should have a field day with it. That said, I am a good chunk of the way through a “disloyal 32”, using these guys and the 21 Blackstone Fortress Traitors I had hanging around. Traitor Guard army when?

Stretching out the kit with BSF Traitors

Speaking of bashing, I set out to build all of the the options in the box and to add a bit of variety to the all the duplicates. Keeping in mind that the non-leader pistol and melee options in the old kit, those were ideal donor bodies! 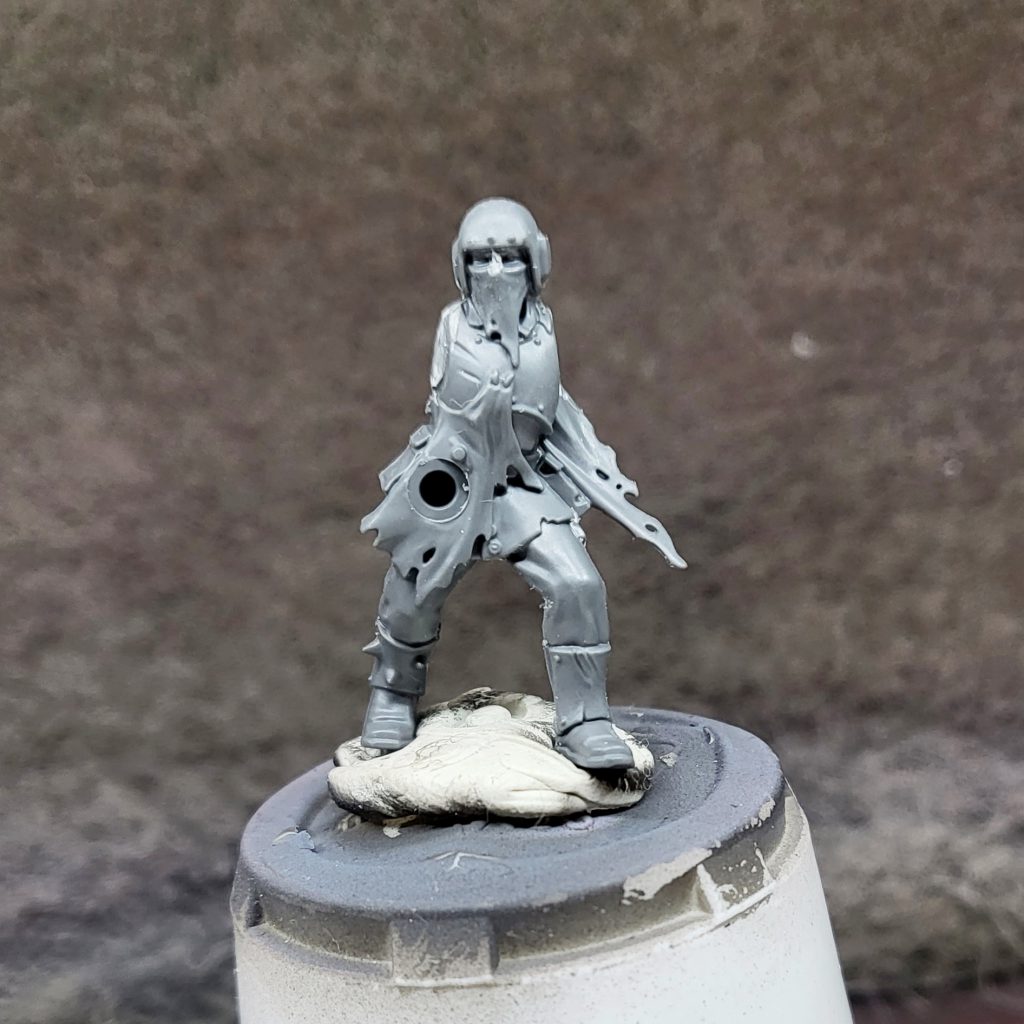 For the dudes who are holding Lasguns, I recommend sticking to simple headswaps. The only OG Traitor left is the flamer dude… and honestly it is just too much work to make it work. I ended up giving him a grenade launcher and sculpting some fur and I do not love it. Your mile may vary… maybe you will have a much easier time than I! All in all, I had a phenomenal time with the kit, and look forward to snagging another one to build stock with lasguns (and to hoard those amazing bits!).