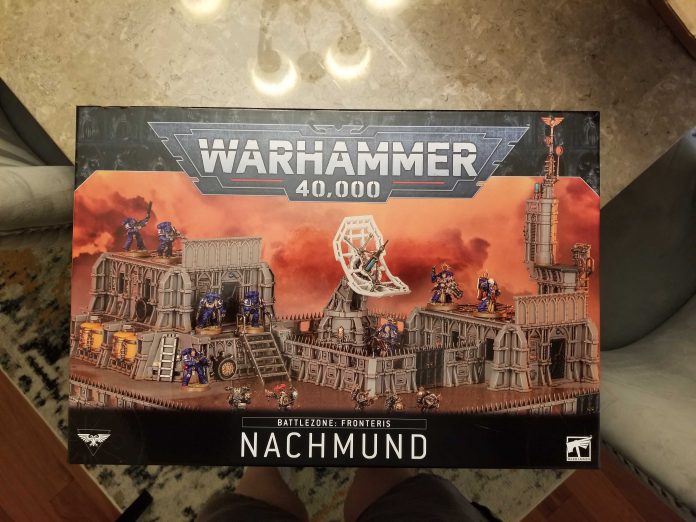 For several months now we’ve been waiting for the release of GW’s newest terrain set, Battlezone Fronteris, which was first previewed late last year and received rules in the Vigilus Alone campaign supplement. This new boxed set expands on the terrain first introduced in the now-legendary Moon Base Klaisus boxed set and further expanded on in the Kill Team Kill Zone Fronteris set. In addition to adding several large new elements, this terrain has been billed by GW as great for both narrative and competitive play.

In today’s review, we’ll talk about the new terrain, assembly, and how it stacks up for narrative and competitive play, with some thoughts on how to get the most out of it. Then stay tuned in the next few weeks when we’ll talk about how to paint the kits. 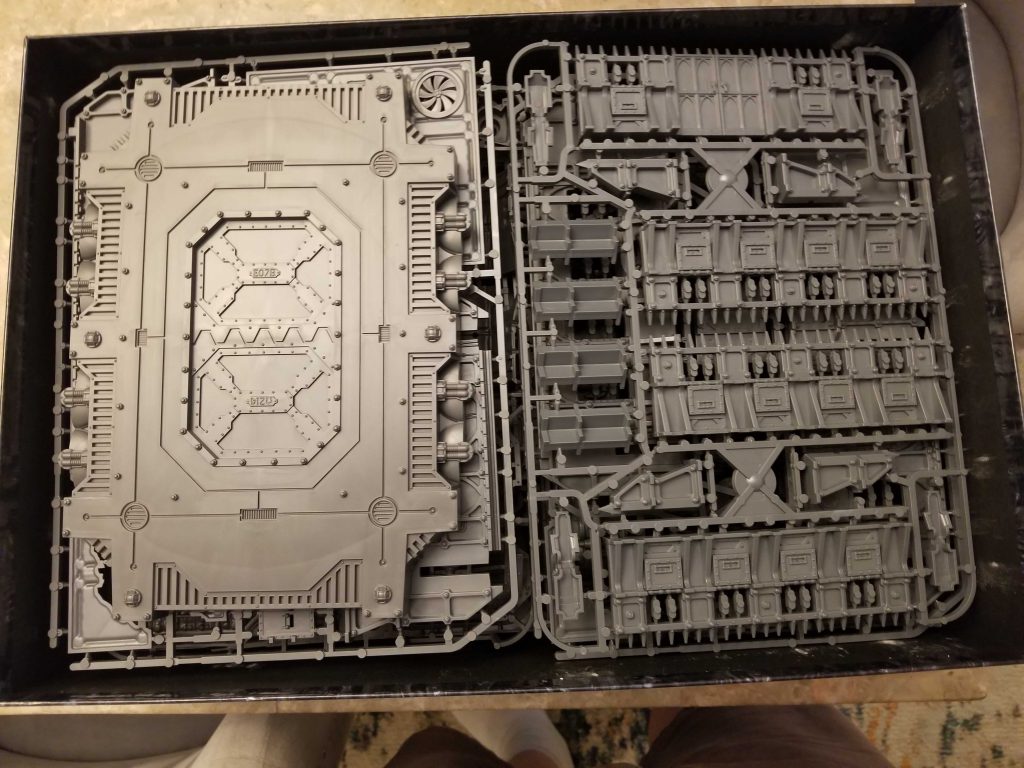 Let’s start off with the contents. There’s a lot here, and the box is already larger than most major releases. Inside are sprues for 8 sections of fence/wall, one landing platform, one Vox Atenna, one Auspex Shrine, and two Sector Fronteris hab-bunkers. That’s quite a bit of stuff, and more complete buildings than you normally see on the ruin-saturated battlefields of the 41st millennium.

the antenna and auspex shrine

Additionally the set comes with two fold-out kill-team size boards (22″x30″), which can be combined into a single board suitable for a Combat Patrol or Incursion-sized game of Warhammer 40k. If you’ve purchased any of the terrain boxes or boards from Games Workshop before, you know what to expect here. They’re double-sided. 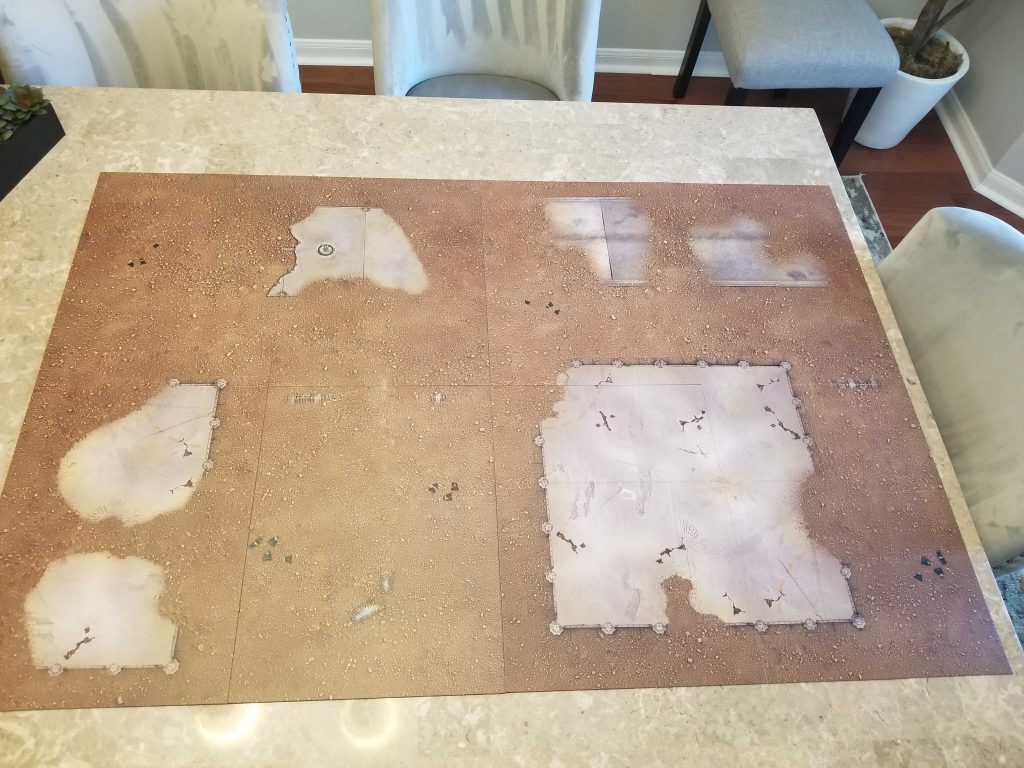 DYLON: Oh boy, this is a hefty box. I actually thought to myself that I’d want to keep this box around for storage purposes, it’s that nice. It also happens to be full of plastic sprues, with the card boards at the bottom.

Fowler: I only went in on the landing pad, and I am pleasantly surprised with how beefy it is. It’s got one loose big piece and a big chunky sprue for the sides and staircase. Lots of similar design elements from Sector Mechanicus and Zone Mortalis terrain here.

Assembly for the kits was quick and easy. The Fronteris hab-bunkers go together with minimal glue while the Landing Pad and Antenna/Shrine are extremely easy to assemble. The Antenna has a couple of movable parts, and you have the option to (permanently) affix the satellite dish either horizontally or vertically.

The walls/fences are pretty straightforward as well, and come with a series of corner pieces you can use to set corners for them, though enterprising modelers may want to magnetize these to create something more modular. The actual pieces aren’t particularly built with this in mind, however.

If there’s a qualm to be had with the kits from a modeling perspective, it’s the sheer number of gates to clip on fences and fronteris hab-bunker, the latter of which have more than two dozen contact points with the sprue. That means a lot of trimming and smoothing after cutting as well.

Building the terrain is one thing; using it is another. How’s this terrain fare for competitive play? Well, that depends on what game you’re playing.

For Kill Team this terrain is amazing. One box will get you more than you’ll need for a single battlefield, and the elements provide lots of sniper positions, cover to shoot from, line of sight blocking, and a reasonable amount of raised terrain that isn’t so tall you can’t climb it and still move. This is an amazing set to build a Kill Team board with.

So you’re a 40k player and you bought this terrain. Now what? Well the next step is to use it to build a battlefield. I’m not a huge fan of this terrain for competitive play – it’s not tall enough, excepting the situation where you stack a fronteris building on top of the landing pad – and as with other 40k terrain, everything is filled with windows and gaps that don’t block line of sight. This means the terrain works best for small games – Incursion or smaller – where hiding vehicles isn’t super necessary (they’re tough enough to last a turn or two, generally), and infantry can just hide behind the walls as needed.

If I were to create a symmetric Incursion board with this terrain for competitive play, it might look something like this: 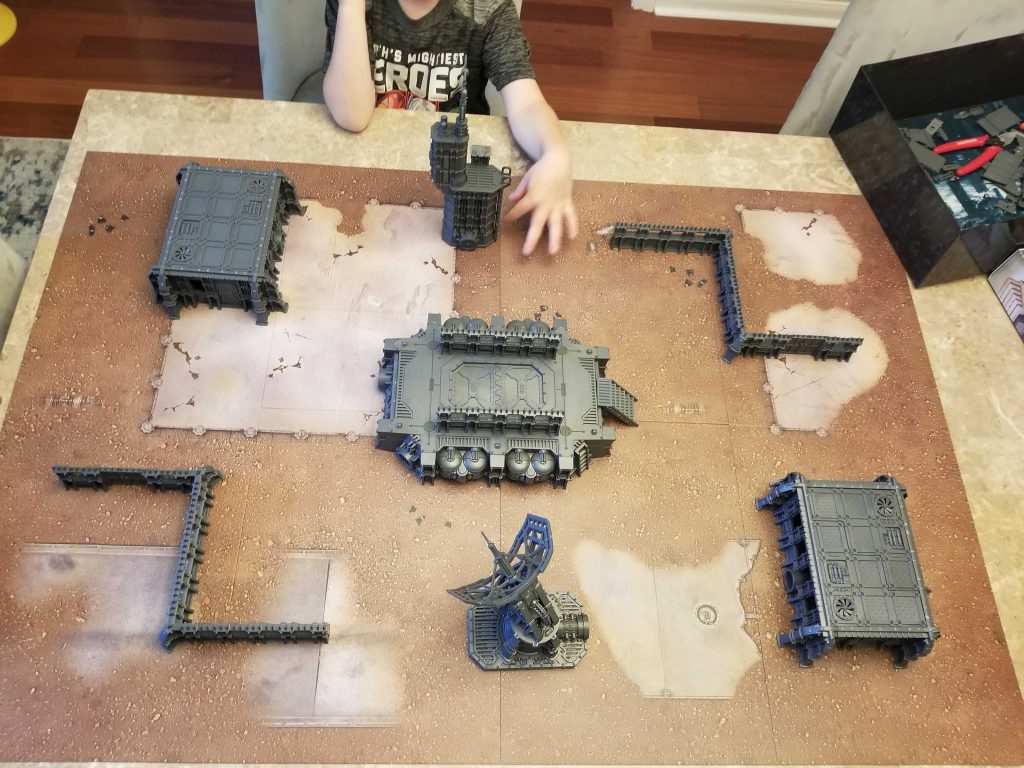 That gives you a semi-varied, symmetrical battlefield to play around, and should do fine for smaller games. I’d probably turn the fronteris buildings 90 degrees, depending on the mission and deployment map, to maximize players’ ability to hide units.

So what about moving up to Strike Force games? 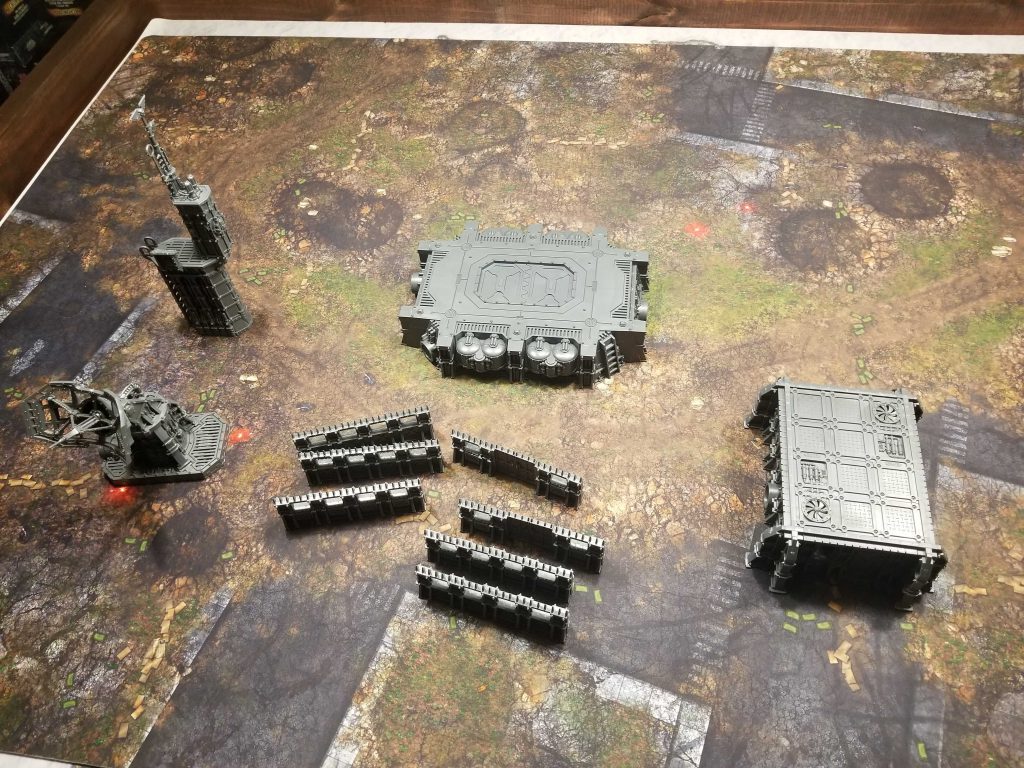 Well, we definitely don’t have enough terrain to make a Strike Force game happen, but we can double up on the kit to produce something worthwhile. Using two Fronteris kits will get us most of the way there but we’ll still want a couple of additional ruins to block line of sight. I’ve added in the ruins from a Moon Base Klaisus kit here to round things out, and built something that replicates the GW terrain layout from their US Open events. 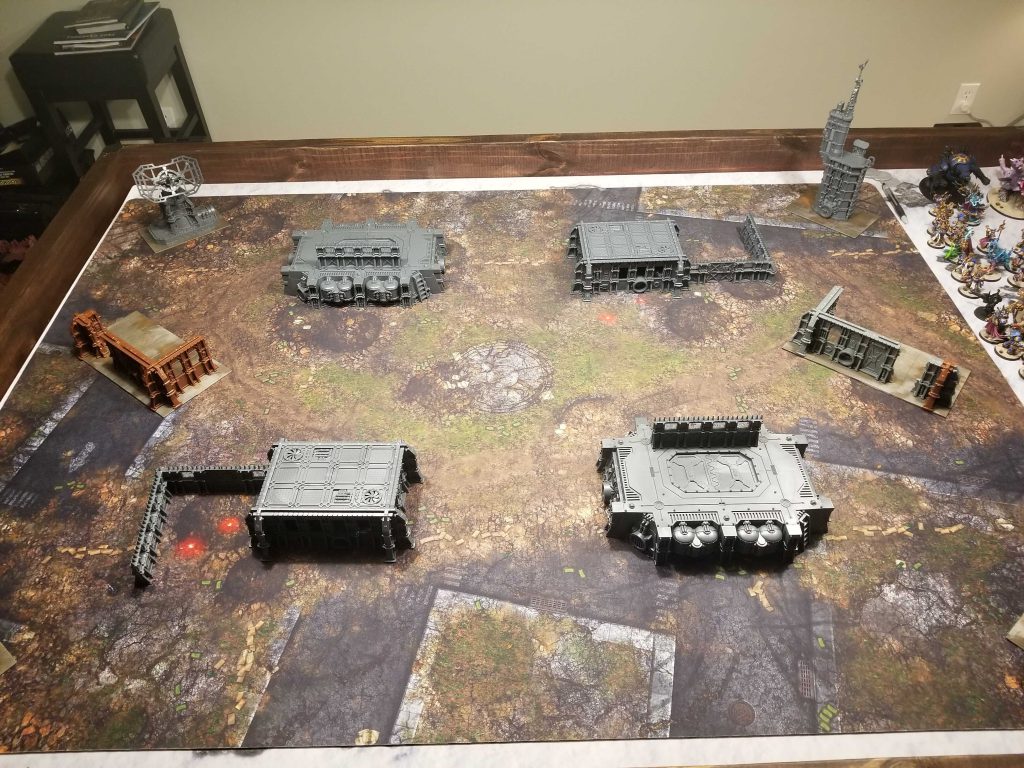 This creates four large, ruin-like terrain features to block line of sight (although not 5″ tall, I’d treat these as Obscuring), and if you add bases for them to create footprints that will further improve things. This leaves you with two hab-bunkers left over but I don’t particularly think that dropping them on top of the landing pads is helpful for making 40k terrain – it looks great but makes the feature basically useless for traversal. 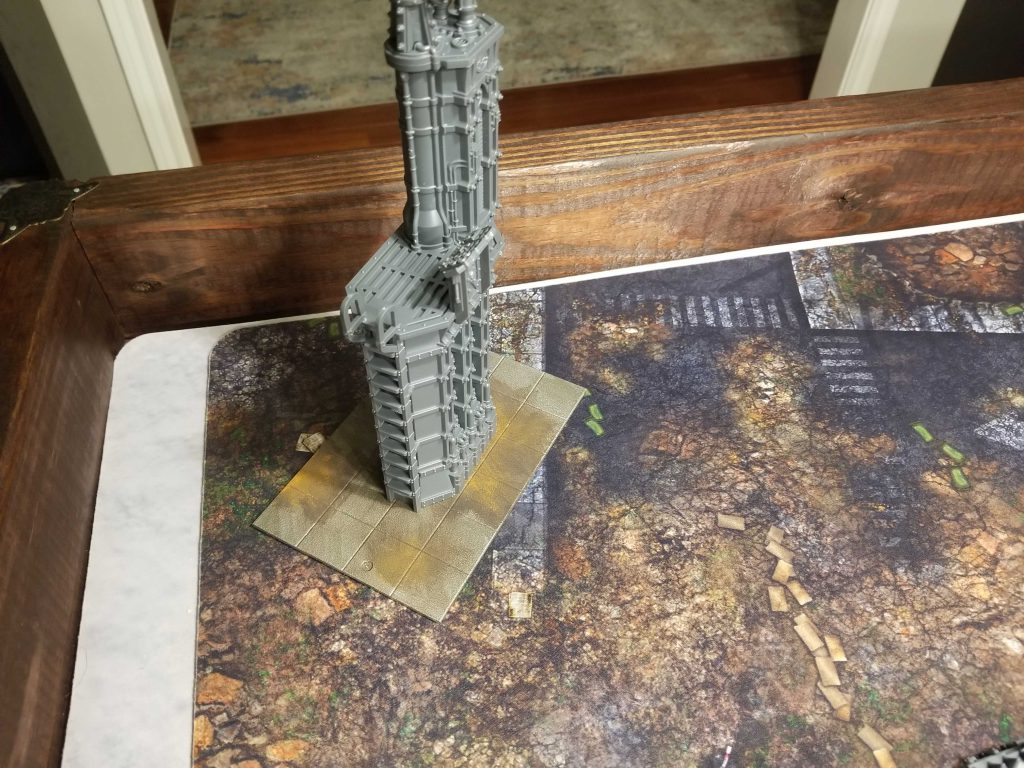 I’ve added my own 4″x6″ bases to the four pieces of Dense + Difficult terrain for the corners. These are made from Citadel plastic movement trays but plasticard or cardboard will work just fine for these. 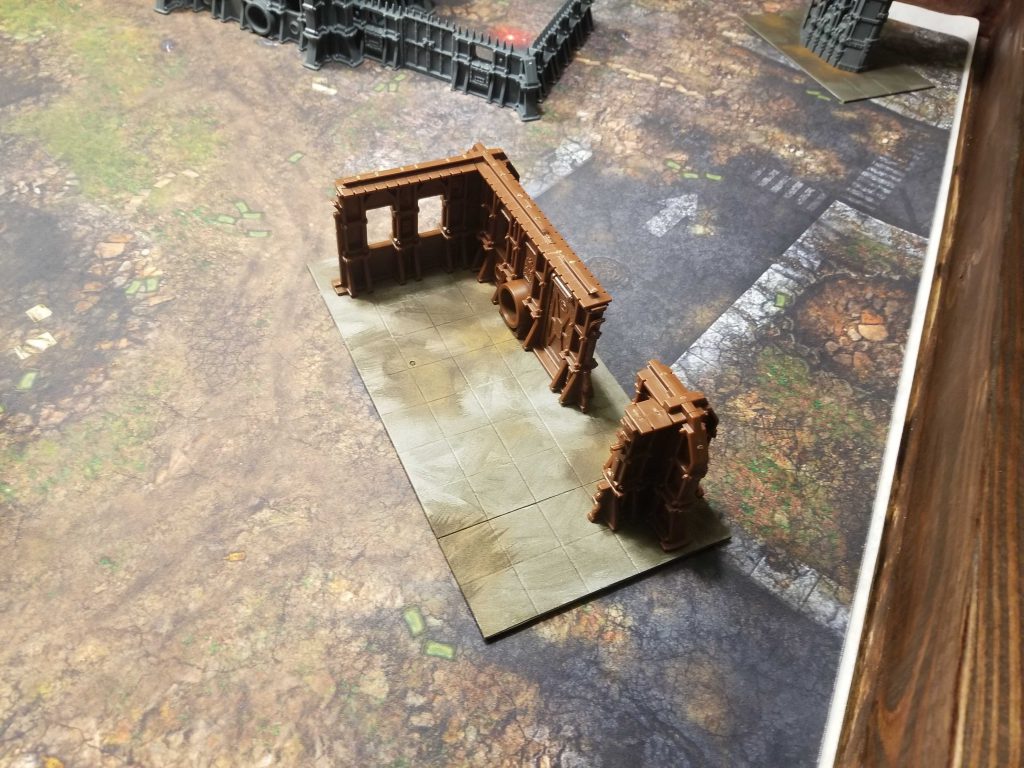 The side ruins – which are also Obscuring, Light Cover, and Breachable – are made from Moon Base Klaisus Ruin walls placed on 10″x5″ bases to give them a line-of-sight-blocking footprint. You could also just use the leftover hab-bunkers for this, though I don’t like their size as much for it and I am always looking for additional reasons to mention Moon Base Klaisus in a Goonhammer article.

This isn’t my ideal table layout by any means, and I generally think that these buildings aren’t amazingly suited for competitive play, but you can cobble something workable together with only a little bit of effort.

From a narrative standpoint, there’s a ton of cool stuff about this terrain, which can be used to build some very cool features and add interesting add-ons to existing features. There aren’t enough “whole, complete buildings” in the 40k terrain library and while that makes sense from the standpoint of building terrain you can interact with in 40k, it also makes things a little boring when you can’t have a battle in a yet-to-be-destroyed part of a city or planet.

DYLON: There’s a non-zero chance that half of this box will end up as Necromunda terrain. I will have to decide how to use the parts from the landing pad, because as a landing pad, it’s a little small for my tastes. But, the top is a very cool piece as-is with the giant door. And each side has incredible cool detailing. Looking at it again, I could see chopping the 4 sides off and having them integrated into hive walls or into the base of a hive building and using the door panel for a hive vault entrance. The comms tower has some of the coolest bits in the entire box: including a little control panel, a panel with twin round vents, a ladder, the light beacon, and the Ad Mech seal. The radar dish is exactly that and it may survive the call of Necromunda. Or not as it could be and abandoned wreck out in the Ash Wastes half buried in a dune… time will tell. The hab bunkers are very cool, and while I could see them making it into an Ash Wastes table, they’re generic enough to see double duty for 40k as well. The stockades are interesting with all the window armor being molded open, but there’s some banger bits here too. I’m already thinking about chopping the top of the walls off to use the solid base for something in Necromunda. The stockade doors have great detailing with hinges and a great latch mechanism. The corner braces for this could be used elsewhere alone as well.

Fowler: I got [the landing pad] 100% for Necromunda. As a large, low piece it could fit into both indoor and outdoor Necro applications. It’s climbable but still has ladders around the sides, so it strikes me as a nice way to vary height and fill up a bit of empty space on a table while being accessible. I may toss a magnet into the other side of the pipe for compatibility with my promethium relay magnetization, but this kit will otherwise stay stock. Again, the shared design with existing terrain kits I use for Necromunda makes this a slam dunk. It’s possible that this could also make it onto a table for Kill Team or more flavorful beerhammer / crusade scenery as well.

TheChirurgeon: Overall I like these kits aesthetically, but I’m less convinced I’ll be able to make them into something workable for 40k. Yes, you can get to something that’s playable with a little work and combining two kits, but that isn’t any cheaper than just dropping the money needed to build that layout with other kits. At $220 for one set or $440 for two, you’re likely better off just buying four boxes of Killzone Chalnath or Killzone Octarius  and using the terrain in those. The Vox-Antenna and Auspex Shrine are sweet additions to games though, and if you got one set just to play Kill Team on, this terrain is amazing for that.

DYLON: My only quibble with this range of terrain is the separate kit cost. I really only wanted the landing pad and the radar dish/comms array kits, but when I realized that for only a little more I could get everything, I went ahead and got the big box. If you’re just buying one of the kits, it’s worth it, but anything more than that, just grab the box and have a ton of rad terrain at a considerable discount.

Fowler: The landing pad is definitely a luxury, especially as it may not be universally useful terrain. If you are interested and the price works for you – it’s a great piece of kit.