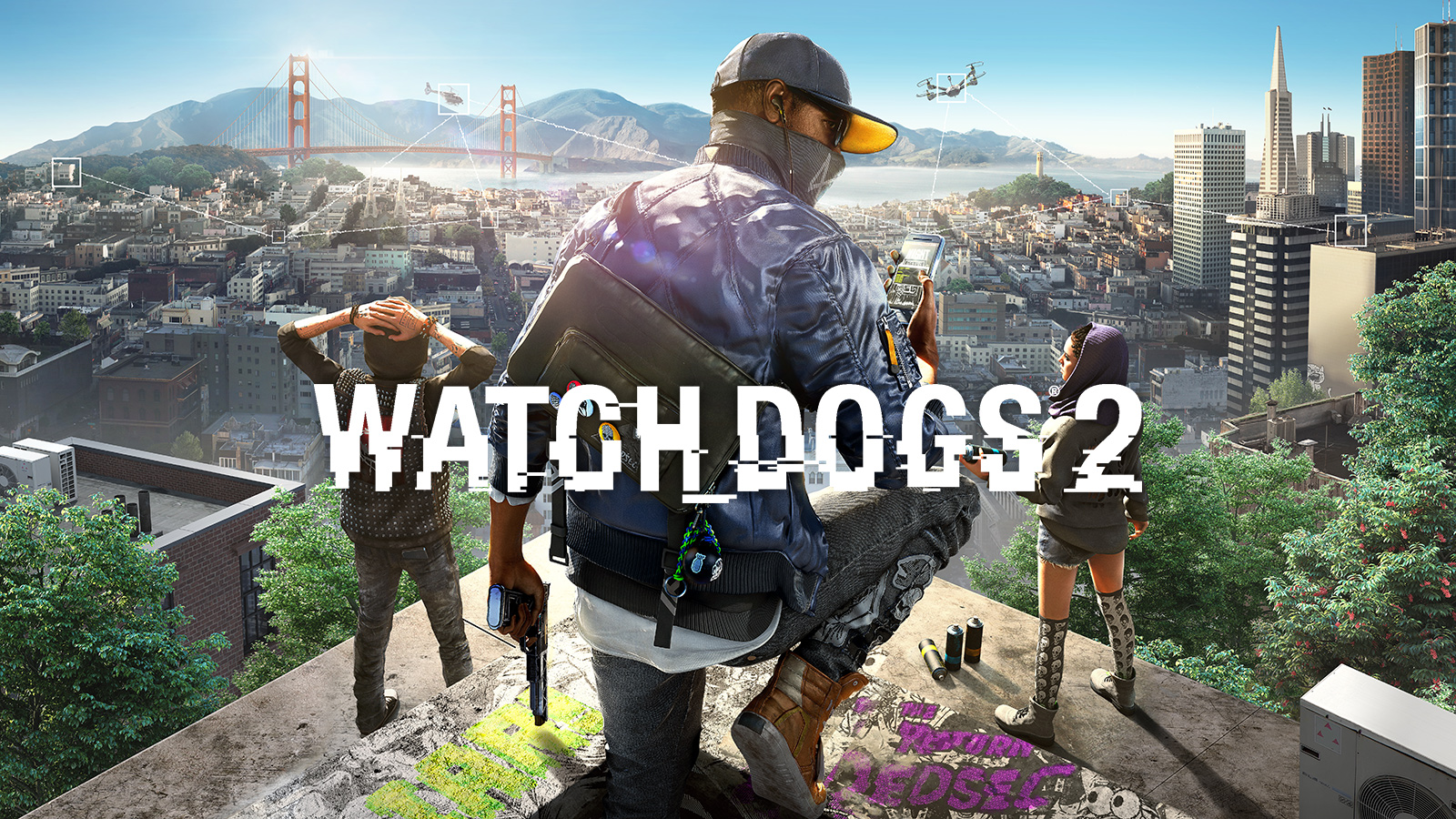 At Goonhammer, our passion for games extends well beyond the tabletop. These aren’t just limited to Warhammer games, and we’ve recently been looking at some of the best open world games to come out over the last few years, including Mad Max, Fallout 76, and The Witcher 3. This week, Bernhardt is back talking about another serious contender in the open world pantheon: Watch Dogs 2.

We discussed one game in this style not two weeks ago — Mad Max (2015) — which was actually an Avalanche Studios and Warner Brothers production. The review of that game said it was one of the best open-world Ubisoft formula games I’d ever played, and I stand by that. The game we’re looking at today has different values, different focus, different commitments — not to mention a different budget — and for all of that, I think I might like it more. Watch Dogs 2 is probably the most complete AAA open-world game that Ubisoft proper has ever put out, which is quite a claim, given the almost 15-year reign that the Assassin’s Creed franchise has had over that market space.

It builds off of the previous game in the series, the slightly differently-named Watch_Dogs, which was in some ways a qualified success, but in many more important ways was an interesting failure. Watch_Dogs somewhat overpromised on its hacking system in pre-launch materials, giving the impression of a much more robust tool-kit of “hack everything” world interaction; when the game came out, there were certainly a number of hacking subsystems that kicked in depending on whether you were on foot or in a car or what have you, but they were very regimented, singular interactions. And the game definitely overpromised on the graphics, because Ubisoft was fool enough to demo it with a lighting engine that never made it into the final product for performance reasons. Perhaps the biggest problem with the game, though, was that the story was hackneyed garbage starring a deeply unlikable man with a deeply unlikeable name who mainly went around abusing people because he was sad his niece was dead, and this excused, say, choking out the female lead the first time they met. Batman knockoffs are tedious enough without running around in a baseball cap and being named Aiden; Watch Dogs 2 moves to a different city and focuses on a different protagonist, and is far better off for it.

Marcus Holloway is a young black Oakland native of somewhat vague educational background — the introduction to Watch Dogs 2 establishes that he’s a hacker extraordinaire who has gotten into scrapes with ctOS and the Blume Corporation, the overarching villains of both games, before. It does not explain why he’s an expert hand-to-hand combatant and match-grade shooter with all manner of firearms, which is usually a forgivable elision in a combat-focused game but in this case is something we’ll circle back to. The important things about Marcus aren’t to do with his talents, however, but his character: he’s warm, quick to make friends, reliable, and above all else he’s something we very rarely see in videogame protagonists — he’s patient.

Patience is a ludonarrative benefit, because Watch Dogs 2’s gameplay requires it, in a very good way. Unlike the Assassins Creed and Far Cry series from Ubisoft, and moving away from the gameplay incentivized by the brutal psychopath Aiden Pearce in Watch_Dogs, the second entry in this series views the traditional gameplay challenges of an Ubisoft open-world game as puzzle boxes to be solved, rather than fortresses to be conquered. Much like in those other games, the player will routinely be presented by a cordoned-off area on their map that’s shaded red and patrolled by heavily-armed guards who will shoot Marcus if he wanders inside its perimeter. Rather than being a question of how you can properly sneak in and kill either all the guards or a target inside (Assassin’s Creed) or how you can brute force your way through the entire compound (Far Cry), the gameplay flow in Watch Dogs 2 poses the question: how much of your aim can you achieve without setting foot inside the restricted area at all?

To that end, you get an RC car and a quadcopter drone which can be deployed at the same time to complement each other, the former covering the ground and physically interacting with hackable objects and collectable items; the latter sweeping the skies, sussing out guard positions, hacking unprotected computers and, after some upgrades, dropping grenades on guards’ heads. Don’t worry. They can be non-lethal.

In fact, the game presumes you’re playing it non-lethally and stealthily, which is one of the few complaints to be had about its story; as a compromise consideration to the AAA audience, and since this is One Of Those Titles from Ubisoft, there are guns in Watch Dogs 2, and not just tasers and stun guns. You have access to the full range of pistols, submachine guns, assault rifles, sniper rifles, shotguns, and even a grenade launcher eventually. Your hacker collective Dedsec 3D prints these perfectly reliable weapons, which never jam, always feed, and accept universal magazines in standard ammunition calibers, in their hideout; this alone is enough to warrant a brutal federal raid by the ATF that likely ends in all of you dead. And yet, even if you use these weapons to, say, murder an entire FBI field office (as you might very well do later in the plot, if you don’t want to take it low and slow), your hacker group will remain regarded as a nuisance worthy of observation but not serious attention, rather than the deadliest domestic terrorists since the Oklahoma City bombing.

This isn’t a plea for branching paths in the plot; far from it. It’s a demonstration that the guns, grenades, and other weapons of war just clearly do not fit the sort of game that the Watch Dogs 2 devs wanted to make. Marcus isn’t portrayed as a tier-one operator badass; he’s an affable hacker. He and the game are both at their best when he’s using an RC car, cameras, and a quadcopter to prank, troll, sneak past, and temporarily incapacitate enemies from a distance. But the demands of a AAA title are such that you have to have the guns and the shooting, and so Watch Dogs 2 has those.

The game is perfectly beatable without resorting to them, however — you only ever even have to buy the very first pistol at the start of the game, and can freely ignore weapons for the rest of it if you wish. And this is the proper way to play the game, because it basically gives you the sort of commentary that the Grand Theft Auto series tries and fails to impart because, lets face it, the Houser brothers aren’t actually any good at writing satire. Ever since they started trying in Grand Theft Auto 3, they were always a pale imitation of actual incisive commentary that got a boost because no other video game was doing anything like that. And there was a market for that kind of stuff — god knows South Park tapped into it — but if you want something that actually parodies modern America, Watch Dogs 2’s take on tech does a much better job by just kind of earnestly playing it straight and taking a bunch of these companies to their logical conclusions; Twitter and Facebook are trying to steal elections, Nest and the various Google Home-like products are 24/7 surveillance systems selling all your private habits; SpaceX is…well, this is actually interesting, because Watch Dogs 2 scrupulously refuses to take aim at Elon Musk or any of his companies. One supposes this was because it was made before the bloom fully came off that particular rose. But the game is unkind to most everyone else, with the main villain being a cross between Jared Leto and Jack Dorsey.

At its best, and except for a couple of railroaded plot sequences Watch Dogs 2 is pretty much always at its best, the game is a perfect open-world sandbox — you get a bunch of buttons to push and a bunch of ways to push them, from remotely running over people with cars to starting gang wars on demand to creating elaborate menageries of proximity mines for an enemy army to wander into. If you do it right, you never even have to put yourself in danger; if you do it wrong, hey, that’s what the guns are for, right?

The game currently retails for $60 on most platforms, which is a bit high considering it’s a four-year old release, but the sequel has been in development hell ever since it decided to embrace the Brexit chaos and they’re still at least on paper in Season 2 of the DLC offerings. It’s worth it at full price in my opinion, but wait a month or two and it’ll probably get roped into a sale.