Welcome back to Goonhammer’s series for aspiring Titan Principes. We here at Goonhammer’s own Collegia Titanica know that Adeptus Titanicus can seem intimidating to players unfamiliar with its particular quirks, but this series aims to equip you with everything you’ll need to play out epic clashes on the battlefields of the far future with your very own Titan Battlegroup. In this series, we’ll be walking you through how to build your battlegroup and command it to glory, including everything from which Titans to include and how to equip them, through to how to command them on the field of battle to secure ultimate victory.

Due to popular demand (and editorial fiat), we’re postponing our dive into stratagems to take a look at a different way to build a list for Adeptus Titanicus: Knight Household Forces. If you’ve ever wanted to see how quickly a lance of Knights can dismantle a Warlord Titan, read on to learn how you can find out for yourself.

What’s the difference between a Household Force and a Titan Battlegroup?

Where the Titan Battlegroups we’ve focused on in our previous articles can bring Knight Banners as support for their Titans, in a Household Force, the Knights are the main attraction. In fact, Household Forces can’t even bring Titans to the board. Instead, they make use of some unique tricks to transform their Knights from useful support units into serious threats. However, as deadly as they can be when they combine their firepower, their fragility compared to Titans and diminishing effectiveness as they lose models means you’ll need to strike hard and fast if you want to have a chance of winning with them. 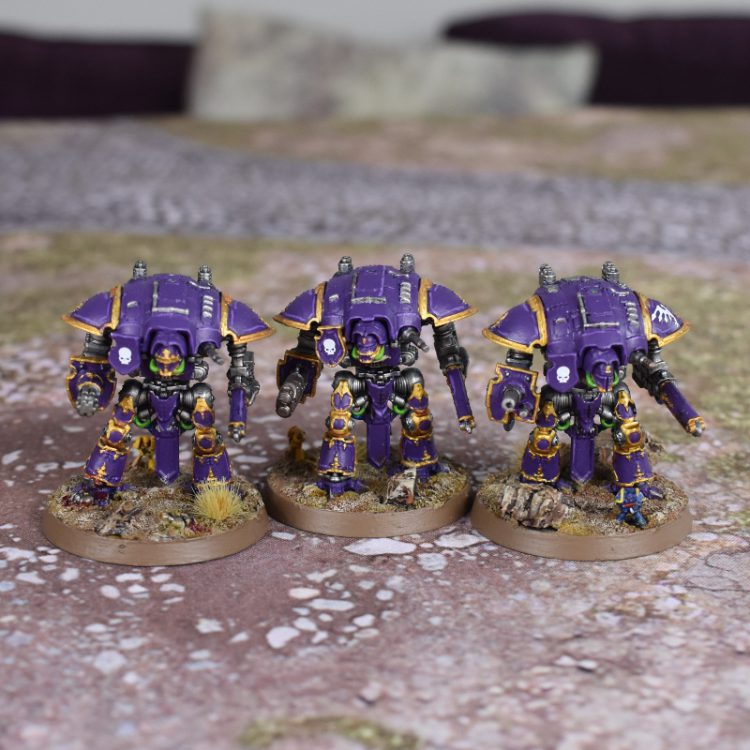 We want to be up front here: Knight Household lists are not for the faint of heart. Coordinated Strikes make their already effective weapons into absolute terrors and transform some of their otherwise middling options into threats your opponent may not be prepared to anticipate. Plus, the sheer number of models you’ll be fielding will take some time for your opponent to chew through. However, they’re not as tough as even a Warhound Titan, and once they start taking losses, it can be difficult for them to rally. Don’t expect an easy win if you choose to field a Household Force, but if you’re up for the challenge, cleverly using your Knights to topple a Warlord is immensely rewarding.

Your Knight Household Force is composed of at least one Lance, and can take additional Lances and Support Banners to fill out the points. Each Lance contains three Banners and is lead by a High Scion. One of your lances will be lead by a Seneschal, who is in overall command of your force – they’re the equivalent of a Titan Battlegroup’s Princeps Seniores, complete with a personal trait and everything. Two of the Banners within the Lance must be the same chassis, and the Knights in each Lance must be equipped identically. 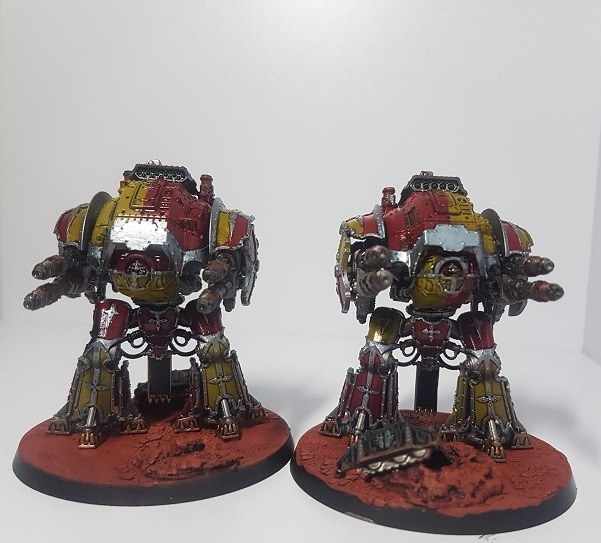 Once you’ve filled out your mandatory Lance, you have two options on how to add more Knights to the list: you can add another Lance, consisting of three more Banners following the same rules as above, or you can add Freeblade Banners, which follow the same rules as Household Support Banners do in Titan Battlegroups. That means that while you can equip them however you want (including in ways that don’t match across the Banner), they can’t take Coordinated Strike orders. They also won’t have a High Scion, which means they won’t contribute stratagem points or the bonuses to hit. However, in exchange, Freeblade Banners activate independently, which means that they’re an inexpensive way to get some more activations to ensure you don’t get completely outmaneuvered by a Titan Battlegroup.

Taking this in mind, we recommend sticking to a single Lance for forces up to around 1500 points and filling out the remainder with Freeblades. At 1500 and above, consider taking a second Lance for the additional firepower and filling out the remainder with Freeblades. Keep in mind that Titan Battlegroups will typically have a minimum of 3 activations, and that that number only goes up as the points limit increases. And while you may not need to worry about your own arcs of fire, giving away the activation advantage entirely might result in you being unable to get favorable shots into flank or rear armor, potentially denying you a kill.

When you’re building your Lances, you’ll want to try as much as possible to ensure that the Knights in those Lances have similar roles on the battlefield to take advantage of Lance Orders. Like Titan squadrons, Lances can issue the same order to any number of their constituent Banners with a single Command check, letting you use your High Scion’s improved Command value to all but guarantee that they’ll resolve the order. This is even more important in your Seneschal’s Banner, since many of the personal traits available to them allow them to issue various orders without even having to roll, which can be very handy in the clutch. Plus, since your Lances need to keep coherency, mixing fire support and close combat Banners will mean you won’t be able to get the most out of them. Generally speaking, this means that while Cerastus and Questoris mix well in Lances, Acastus will usually do best in their own Lances or as Freeblades where they can take advantage of their increased range while the smaller Knights mix it up in close.

A note on reinforcement units: while a Titan Battlegroup can clearly bring Knight Banners as reinforcements, it’s unclear at best whether Household Forces can bring Titans as reinforcements. The rules in Doom of Molech say that “a Household must consist of at least one Lance, made up of three Banners, plus a number of reinforcement units as described as follows.” The only options that follow are for Household Banners and Freeblades, and Titans aren’t mentioned. As currently written, we don’t think the rules permit a Household Force to take a support Titan. If you want to give it a shot, talk to your opponent or TO, and they may permit it. Don’t be surprised if an event won’t allow it, though.

When equipping your Household Force, you can largely follow the guidelines from our Knight Focus article. However, a few options available to support Banners are worth taking another look at in a Household Force list:

Generally speaking, Cerastus Banners will want to bring either Lancers or Acheron, and you’ll probably want Acastus Knights Asterius as usual. For Cerastus, Lancers can soak up a bit more punishment and can afford to play a bit more aggressively, while Acheron don’t necessarily need to close to within melee range in order to get use out of their flame cannons. For Acastus, the lower strength of the Porphyrion’s twin magna lascannons is mitigated by your ability to make Coordinated Strikes, but the same rule can make the Asterius’s mortar batteries a decent weapon for called shots into opened up armor.

Questoris will generally do best equipped with some combination of RFBCs, melee weapons, and thermal cannons, sprinkling in a few rocket pods to taste. The battlecannons and rocket pods will give you the firepower you need to pound down shields and can flex into decent anti-armor weapons with Coordinated Strikes. Melee weapons and thermal cannons both pose serious close range threats that can tear apart enemies once you close – take melee weapons if you want to make free called shots, and thermal cannons if you want to take advantage of Coordinated Strikes to burn through armor early and then finish off with a volley of strength 8 Fusion-powered death. Plus, the relatively high strength of your two close-range options means you can still threaten to damage armor even after you’ve taken a few losses. You could also experiment with some AGCs, but be careful about taking too many of them – you’ll need to set up a situation where you can unload with multiple of them at a high bonus to the armor roll to really take advantage of the number of shots they can put out, and putting all your eggs in that basket is risky.

Knights play very differently from Titans, and those differences are only magnified in a Household Force. Titans are much more durable and don’t suffer from diminishing returns in the same way that Knights do. Even the relatively fragile Warhound Titan requires significant focus to take off the table, and any critical hits or damage to weapons that might decrease its combat effectiveness aren’t permanent, since its servitor clades can repair that damage if given enough time. By contrast, even a Banner of Acastus, the most durable Knight in the game, can suddenly vanish from the battlefield with decent luck from a belicosa. 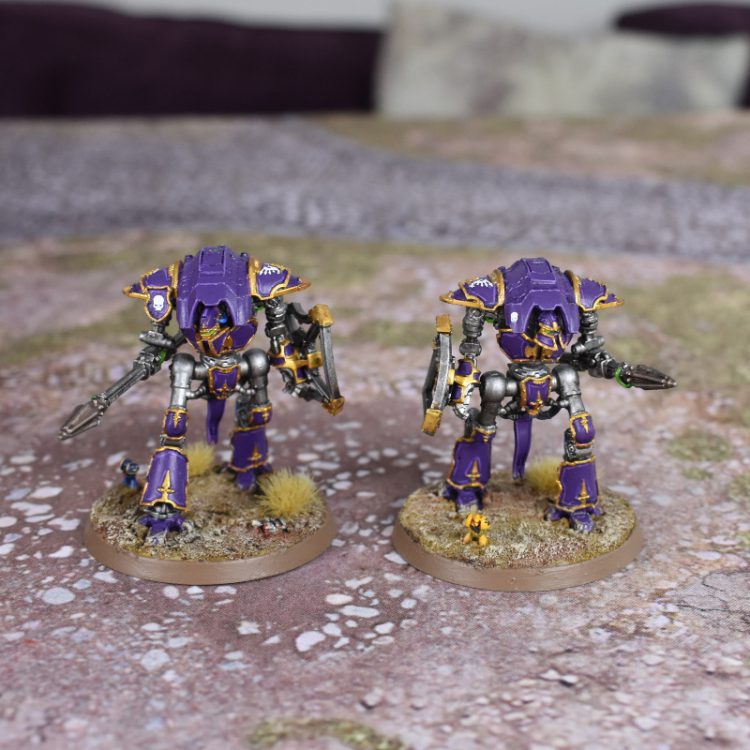 With that in mind, in order to get use out of your Knights, you’ll need to ensure that they’re able to stay alive long enough to bring their weaponry to bear. Play carefully around terrain and try to approach from off-angles. Use Freeblades to inflate your activation count so that you can keep your Lances outside line of sight or firing arc of weapons like quake cannons or volcano cannons that pose major threats. You’ll generally want to move your Freeblades first since it’s easier to keep them hidden, then move your Lance once the enemy has committed their units so that it’s harder to focus their fire. As with Support Banners in Titan lists, you’ll want to take advantage of your superior speed and maneuverability to rapidly strike from cover and move into your target’s flank or rear arc, both to avoid incoming fire and to get the most mileage out of your weaponry.

In the Combat phase, you’ll want to take advantage of your Lance’s ability to concentrate large amounts of firepower into a single activation in order to focus down targets and force as much of your firepower as possible toward the top of the round and into a single target. Use your Freeblades like you would support Banners in a Titan Battlegroup, clogging up the battlefield and making room for your Household’s Lances to go to work, or standing back with Acastus sending as much hate down your chosen firing lane as you can. As usual, coordinate your fire on a single target to make your first strike count – a Banner that’s down a Knight or two will quickly find that it’s losing effectiveness, while a Titan will still hit back just as hard until you’ve put a few points of critical damage on it.

Knight Household Forces offer a different way to play Adeptus Titanicus for players who are willing to take on the unique challenges they pose. Their organization into Lances lets them dish out amazing amounts of damage and gives them access to more choice in stratagems, but the more structured organization of their forces compared to Support Banners imposes limits on their ability to outmaneuver Titans, and mounting losses will quickly put the brakes on their ability to deal out the pain. However, if you build your list wisely and play to your strengths, you’ll be able to take the fight to the Titan legions and might just come out on top.

Join us next time as we get back to our scheduled articles and talk stratagems and how to use them, including stratagems specific to loyalists and traitors, as well as the Knight Household specific stratagems.