This week, we’re looking at the single most expensive model in the game: the Warlord-Sinister Psi Titan. Combining unique psychic powers on a Warlord frame with what is possibly the most effective weapon in the game, a Warlord-Sinister can be terrifyingly effective. But is it worth the points? 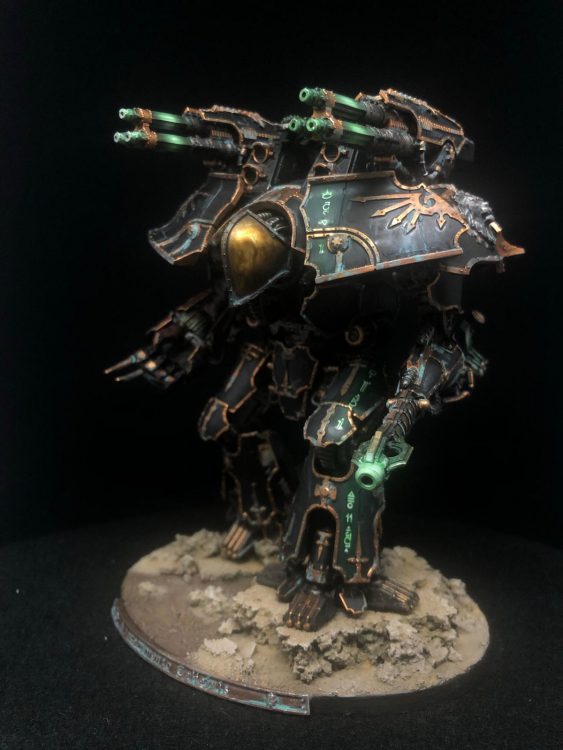 What are Psi Titans?

While the Titans of the Collegia Titanica are prized relics and rare sights in the Imperium, very few even know the existence of the Psi Titans of the Ordo Sinister. In the final years of the Great Crusade, the Emperor tithed 25 Warlords directly for his own use.

Employing arms forbidden to all others including the Primarchs and the Warmaster Horus helmself, the Ordo Sinister operated directly by the Emperors command. Instead of being piloted by a Princeps, Psi-Titans were piloted by a psychic null – the only beings capable of withstanding the power of the enslaved coven of alpha-grade psykers that fuelled the terrifying weaponry.

Housed on Holy Terra, the God-Engines of the Ordo Sinister were only employed by the Emperor in circumstances just short of Exterminatus, shrouding them in secrecy and scattered whispers.

Soggy: Of the 25 Warlords tithed by the Emperor, only 20 of them were successfully converted into Psi-Titans – making them as rare as Primarchs and debatably more powerful if you take the legion into account.

Bair: And none of the Psi Titans famously did everything wrong; so they are better, if not more powerful.

Psi Titans in a Nutshell

Currently, the only Psi-Titans in Adeptus Titanicus are the Warlord Sinister class engines, in game terms they are a very souped up version of the normal Warlord. The characteristics of a Psi-Titan are identical to a normal Warlord in every way such as its reactor, shields, how to takes damage, and how quickly it moves; the way it operates though is entirely different as it uses psychic powers instead of orders and has a very unique weapon on its left arm-mounting. 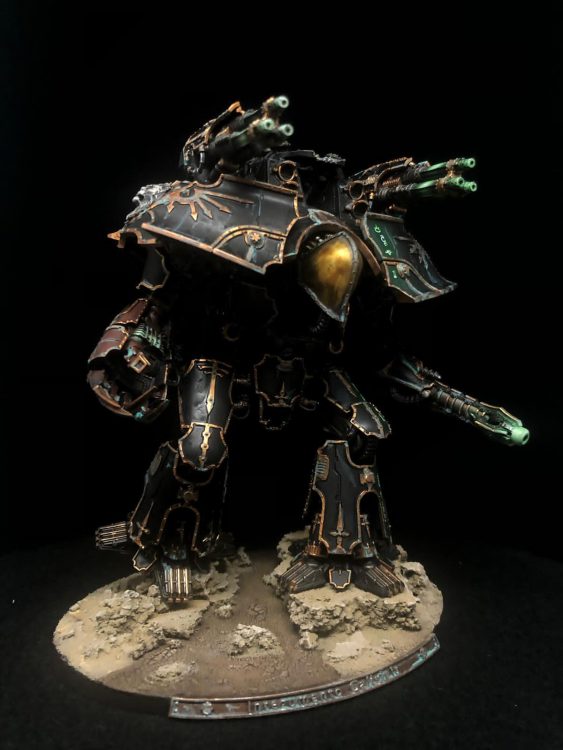 As is from Forgeworld the loadout isn’t the easiest to use, mostly due to the Power Claw. As we’ve mentioned in other articles, the Power Claw can be difficult to get the most mileage out of, especially so when this is on such a huge priority target. The claw will act mostly as a deterrent as you close up the field. Unfortunately, the paired laser blasters aren’t great here – consider taking either paired turbo-laser destructors to follow up on the Sinistramanus from further out, or paired gatling blasters to put in finishing blows on crippled engines at mid-range.

This build is pretty self explanatory, all weapons capable of outranging the table and capable of making great use of the Antipathic Tempest power. It’s hard to understate the utility of this power, which drops a marker which hits anything within 3” of it anywhere on the table within line of sight casing an automatic S8 hit that bypasses voids with both Concussive and Quake.

Bair: In writing this I also realised that Psi weapons ignore Void Shields. Not “shields”. Which means Psi weapons have no problem going straight through Titan shields but can be stopped by Knight Ion Shields which is hysterical, of course the S10 of the main gun still bypasses them anyways, but the S8 power does not until the banners have lost some Knights.

Soggy: Being able to Concuss bypassing shields is pretty insane, especially against squadrons or other battlegroups that like to stand near to each other like the Fortis maniple.

This loadout forgoes a lot of movement but if the terrain is open enough, everything will be vulnerable to you. On the other hand, if your table has any reasonable amount of terrain, you might find yourself without any targets for either of your arm weapons on multiple turns, which makes your 300-point investment somewhat moot.

This loadout is a bit more self-reliant and not entirely leaning on the Sinistramanus Tenebrae or the psychic powers. That said, it can make great use of Quickening to land extra Paired Gatling shots to drop void shields or follow up for the kill with the Ordinance trait. While you’ll occasionally use another psychic power, those will be rather situational such as needing to repair, or needing to Quake an enemy Reaver about to charge, stopping it short in its tracks by slowing it down.

Given the high cost of fielding a Psi Titan, you’ll want to build around it to get the most value from those points. Here are a few stratagems you might consider:

Bair: Thanks Soggy for discovering the synergy there with Iron Resolve, Condit is going to love me using that the next time I pull this out on him!

When it comes to the rest of your battlegroup, look to take forces that will support the Psi-Titan by finishing weakened foes or skirmish with the enemy to hold them back – just make sure you don’t get in the line of fire. Due to its high cost, a Lupercal, Corsair or Ferrox maniple are your best bets to try and fit everything into 1750 points or less.

Remember that the Psi-Titan doesn’t join a maniple, so gains no benefits from maniple traits. It doesn’t get Legio rules, either. It’s also easy to forget that the aura of -1 command it projects applies to both friend and foe, so don’t park anything near it that relies on orders to be effective – Acastus Knights will want to set up somewhere else. 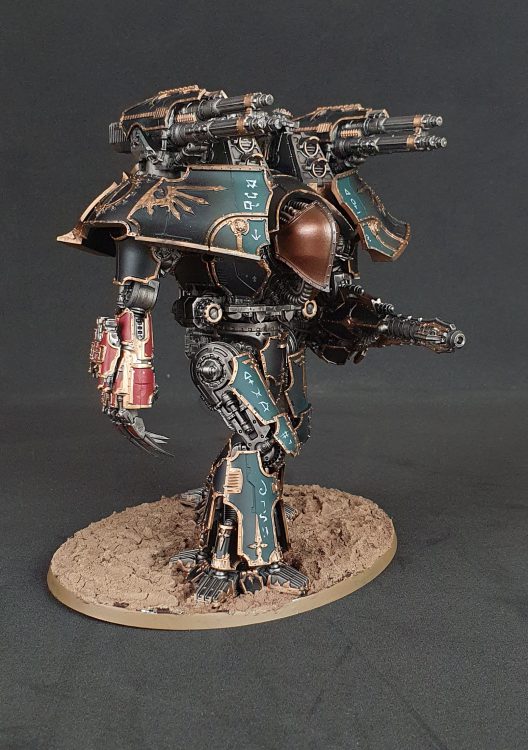 The star of the show here is the Sinistramanus, which has a solid chance of just removing a Warhound from the board every time it fires, and will almost certainly put any target in Big Danger. Aiming for the body is usually your best bet, since you’ve got a good chance of forcing VSG Burnout on anything smaller than a Warbringer, and a little luck will get there on anything bigger. It’s also the single best Titan finisher in the game: if you activate something else first and aren’t quite able to get the kill, 3 auto-hitting strength 10 hits into a location of your point is going to get the job done. You won’t always want to do this, but if you’re staring down a Vulpa claw-lord in close, having this up your sleeve could save you some serious heartburn.

The Sinistramanus’s downside comes from its Taxing trait – after you fire it, you roll the Reactor die and apply the results as normal, with one exception: if you roll the Awakened Machine Spirit result, you take the heat as normal, then roll on the Psychic Manifestation table. Crucially, you do not get to make a Command check to try to avoid this. In other words, every time you fire this gun, you have a 1-in-6 chance of rolling on the table. Luckily, the lower-numbered results are manageable, but they do compound over time, potentially resulting in disastrous effects as the game goes on. You’ll still want to be firing the gun nearly every turn, but pay attention to your Psychic Overload value so you know what to expect if it goes wrong.

Don’t bother using it against Knights unless you don’t have any other targets that need to be removed. This is your centerpiece and your main problem solver, so use your other models to deal with the small fry while this guy runs the table on anything bigger. This is only made worse by the fact that it can’t take Split Fire orders, so firing either of your other weapons at Knights means you’ll have to shoot the Sinistramanus at them as well.

Power selection is going to be essential, and you should generally be trying to cast one every turn. Luckily, they each have defined roles that will usually make it pretty easy to figure out what you should do. Necrotechica is incredible to get some additional staying power, giving you an amplified Emergency Repair that can also repair structure. If you’ve got targets that aren’t going to be able to hide from your Sinistramanus during the Movement Phase, Antipathic Tempest or Death Pulse both offer free damage, potentially to multiple targets – just keep in mind that that potential means they can’t make Targeted Attacks. If you need to move, go ahead and cast Quickening – it’s First Fire that still lets you move and saves you two reactor pushes to boot.

If you take critical damage to the head, repair it immediately. Not only will MIU link make it harder to cast Psychic powers, you’ll also be far more likely to have a Psychic Manifestation and will roll a d10 on the table. This is very bad, as a 9-10 on the table will result in your Preceptor-Intendant administering the Emperor’s Mercy to the on-board psykers, removing your ability to cast psychic powers for the rest of the game and permanently disabling the Sinistramanus for good measure. This will leave you with a Warlord with no maniple trait, no Legio rules, and only two guns that cost you 300 extra points. Avoid this at all costs. 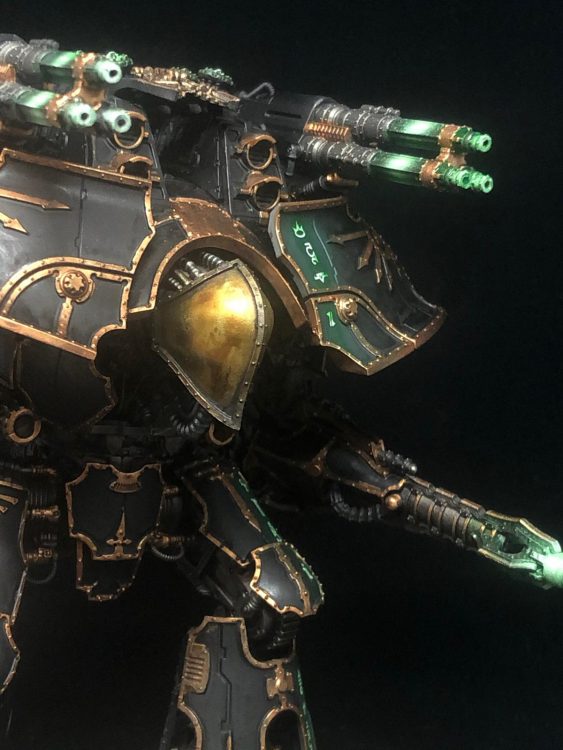 When facing off against a Psi-Titan you really have two options, focus it down fast – if you have the tools available or ignore it. By taking cover in terrain or use of Obscuration Barrages (or Stygian Veil if you’re lucky enough to have painted Tritonis) you can negate the impact the Sinistramanus Tenebrae will have on the battlefield.

Psychic powers are Command checks, meaning auras such as Legio Magna’s Howls of the Damned can impact their effectiveness. Critical damage to the head will also give you this effect, as well as making Psychic Manifestations both more likely to occur and much more dangerous. Targeting the head is difficult due to the increased armor value, but it honestly may be worth trying for it here.

Failing that, shoot off the Sinistramanus. It’s a 4+ repair that can’t be fixed with the Necrotechica power, so the only way it’ll be able to repair it is during the repair phase, and if you’ve been focusing the thing down, repairing that gun may well take a die that could have gone into venting heat or even raising voids.

Condit: I don’t envy the player who has to make that decision, and so I will attempt to force it on Zach every time he runs that thing.

Being able to field one of the Emperor’s most secret weapons in your own games is as exciting as we could have hoped for, as it packs some of the most devastating effects that has yet been seen in the game. You won’t want to bring it every game, but if it’s used right, it can be utterly devastating.