What is Conquest: First Blood II?

Smart and attentive readers who have been following our Conquest coverage will already know that the game comes in two distinct flavours. So far we have focussed on the rank-and-flank stylings of The Last Argument of Kings (TLAOK), but now it’s time to take a closer look at the skirmish level First Blood II (FB2). Or Rambo, if you prefer.

Special thanks to Para Bellum for providing review material. In addition, if you want to get 10% off and support Goonhammer, make your Conquest purchase by clicking here for US/Canada or here for EU/rest of world. You’ll also need to enter code “goonhammer” at checkout. Look, we don’t make the rules, that’s just how it works!

Now, the idea of larger scale wargames having little skirmish siblings is hardly new. For instance, Warhammers Age of Sigmar and 40k have Warcry and Kill Team, respectively. In addition to the shared setting, Games Workshop provides rules for using your smaller forces as units in your larger armies, or drawing on your existing forces to make an elite skirmish squad. However, while the compatibility is there, they’re still very much separate games with different rulesets and straying from the purpose designed skirmish forces don’t always give the most satisfying results.

Conquest is different. The Last Argument of Kings and First Blood use exactly the same miniatures and the core rules are more or less the same. If you have a TLAOK army, you can build a FB2 force using the vast majority of your collection, and if you’re starting from FB2, it’s easy to bulk out your regiments from their skirmish sizes to full-fat TLOAK versions without worrying that they’re going to have the wrong loadouts.

Of course the two games aren’t completely identical, otherwise there wouldn’t be much point in them having separate rulebooks. What’s ideal for rank-and-flank battles isn’t always going to work out for skirmish warfare. That’s why Para Bellum reworked the first edition of First Blood and launched First Blood II earlier in 2022.

That all make sense so far? Great! Let’s dive in and see how FB2 stacks up to big, bad, TLAOK.

What Stays The Same?

As we already established, the obvious things here are the miniatures and factions. FB2 regiments aren’t some kind of special forces variant with fancy weapon options. If you buy some, say, Hundred Kingdoms Men-at-Arms, they’ll work equally well in both games. This works particularly well with the various dual unit kits Para Bellum produces. A box that would provide a single unit for TLAOK can be split to make two different units for FB2. If you later decide to bring them up to full TLAOK strength, another purchase will allow you to do that. While not every unit comes as a dual kit, many do and it can make starting an FB2 force more economical than it would be otherwise.

In terms of the rules, the core mechanics are broadly similar. The same characteristic profiles are used and you’re still trying to roll equal to or under the relevant stat to accomplish something. That doesn’t mean the stats for a given unit will be the same in both games, but they will have similar roles and you’re not having to learn an entirely new dice mechanic.

FB2 also retains the use of unit cards arranged in Command Stacks to determine the order of unit activation at the start of a round, and most of the actions that units can take are the same. Once you’ve grasped the basics of Conquest, you can happily apply them to both versions of the game with minimal fuss. You’ll still need to check the rules for the specifics, but you’re not learning an entirely new game.

As you’d probably expect, the size of the armies is much smaller. A standard TLAOK Infantry unit consists of twelve models on three stands minimum. FB2 dispenses with the stands entirely and reduces the starting Infantry unit size to four, with Brutes and Cavalry down to just one. You can still buy additional models and upgrade models to Leaders and Standard Bearers, although Leaders are no longer free and Standard Bearers can only be taken once the unit reaches a minimum size.

This is important because these two kinds of command model take on new roles in FB2. Leaders (or Acting Leaders, if the unit doesn’t have an actual Leader) act as the focal points of their units, with all models having to remain within 5” of the Leader. Standard Bearers are counted as Leaders for purposes of unit coherency, so models can be more than 5” away from the Leader as long as they are within 5” of the Standard Bearer. This makes larger units easier to manage, as you don’t have to keep them all crammed together.

Character models work completely differently too. Rather than each army having multiple characters, each hanging out with a unit from their warband, a FB2 force has a single character taking command. Freed from the restraints of unit stands, they can now act on their initiative as powerful independent heroes. Interestingly, when constructing your army you don’t pay any points for your commander, unless they’re mounted on a Monster, which comes at a premium. Some measure of balance is provided by Command Abilities, various buffs and manoeuvres that your commander can use on other units. A commander who is a powerful spellcaster or an absolute beast in combat will likely only have a small number of Command Abilities and be limited to one per activation, while weaker commanders may be able to use two or more from a longer list.

FB2 also gives a new lease of life to your Command Models. Rather than just providing a buff to a unit, they now have full Characteristic Profiles of their own and act as Leaders to the units you include them in. This is a really fun change from TLAOK, that takes Command Models from being essentially unit upgrades that you have to pay real money for, to worthwhile additions to your force in their own right.

Another major difference in FB2 is that it forgoes TLAOK’s deployment system for something more traditional. Rather than units coming on turn by turn, you now deploy your entire force on the battlefield at the start of the game, with the exception of units that are allowed to be kept in reserve.

Diving a little deeper into the rules, there are a lot of changes to reflect the different scale of battles. Models engaged in melee can no longer be targeted with ranged attacks and weapon ranges tend to be shorter, but in exchange, there is no longer a penalty for shooting targets at over half range. Melee happens within a short engagement range, rather than strict base content between blocks of models. Spears and other long weapons can attack targets behind those directly opposing them, and shields can be used to prevent this. Overall, it’s a lot of small tweaks that serve to give FB2 battles a feel of their own. 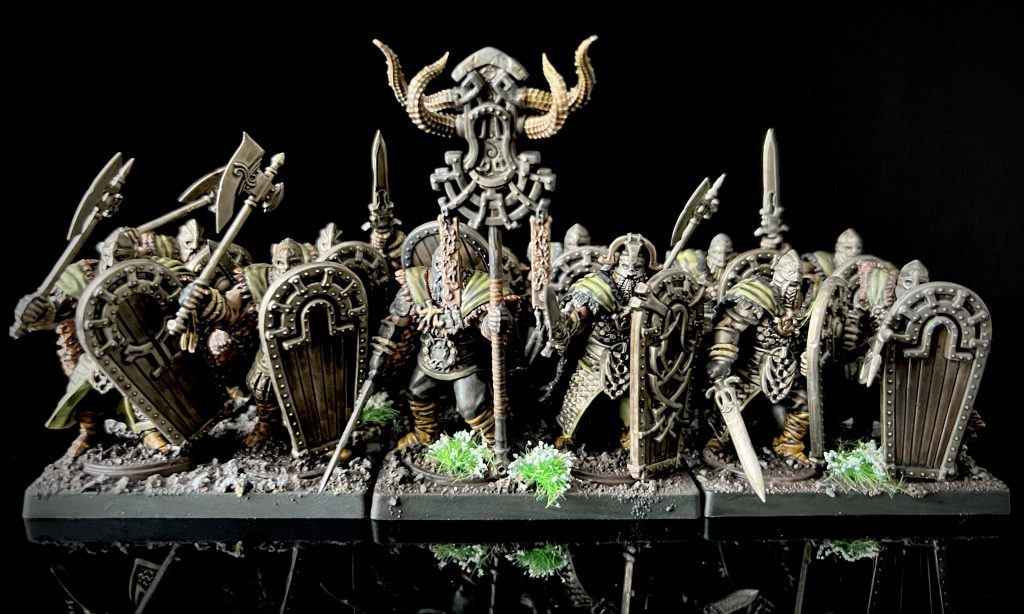 Conquest: The Last Argument of Kings stands out as a fast rank-and-flank game that scratches an old itch while feeling distinctly modern and fresh. It steps into the gap left by Warhammer Fantasy Battles that the likes of Kings of War never quite managed to fill. First Blood 2 suffers in comparison because it doesn’t offer anything new. There is no shortage of great fantasy skirmish games on the market and while there is nothing particularly wrong with FB2, it doesn’t feel as essential as TLAOK. That being said, Conquest’s rank-and-flank incarnation requires a pretty hefty pile of miniatures to play, and the compatibility between the two games makes FB2 a great way to get some games in while you’re still building up your force, or to have some skirmish fun without having to invest in a whole new game.