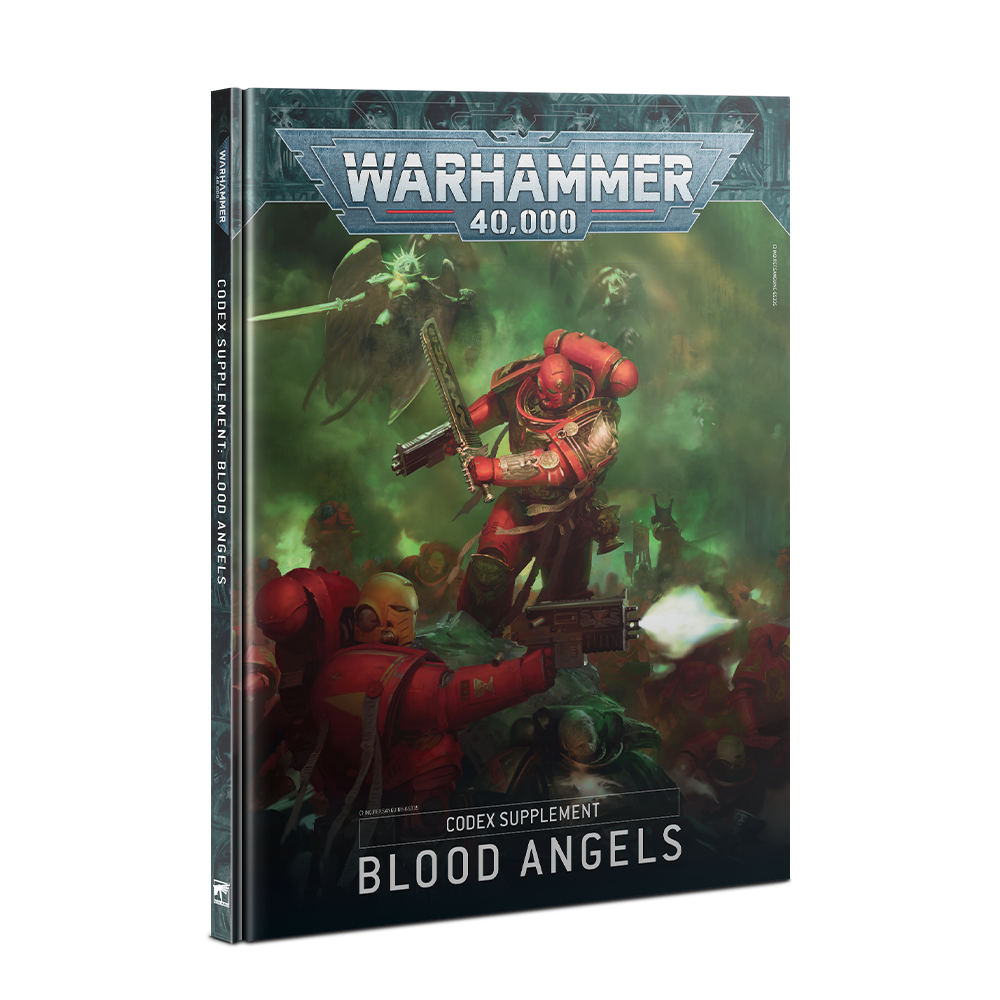 Welcome back, Narrative Players! Codex Supplement: Blood Angels is releasing this weekend and if you happened to read our review of the rules last week, you’d have noticed that we teased an upcoming Crusade Rules review – we’ll be doing these for every book moving forward. So if you wanted to know more about the Blood Angels’ Crusade rules, we’ve got the scoop.

After seeing the Codex Supplement Crusade rules for Space Wolves and Deathwatch, you might have felt that the bulk of Crusade rules for Space Marine chapters were going to be in the core codex, with only minor additions in the supplements. That would have been a fair take – kill team progression in Deathwatch and Deeds of Making in Space Wolves are neat but nothing exciting – but fortunately for everyone, the Blood Angels Crusade rules smash that by piling on a wonderful new mechanic: The Flaw. 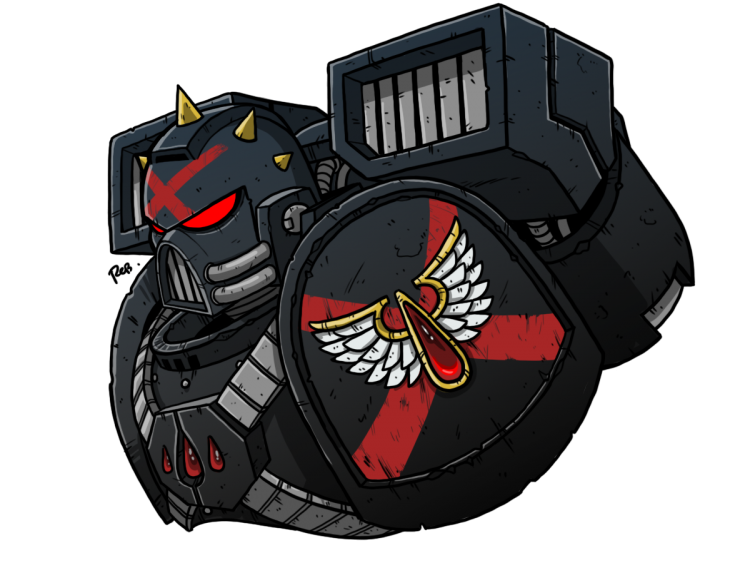 The real meat of the Blood Angels Crusade rules is this section, which specifically details how your units deal with the genetic flaw in their chapter’s gene-seed that causes them to have death visions of Sanguinius that cause them to fall to into a state of uncontrolled bloodlust called the Black Rage. The mechanic introduced here has units accumulating Flaw Points each time they destroy an enemy unit with melee weapons, and for every three they take a test rolling 3D6 against their Leadership. Pass and your unit manages to keep things in check; fail and they lose a battle-brother to the Black Rage.

This replaces the standard Matched Play method of having units succumb to the Black Rage via Stratagem and the rules for this give you a way to handle losing Characters – including Captains and Lieutenants – and Dreadnoughts to the Black Rage, as well as losing individual models (units basically take a Devastating Blow since they effectively lose a member permanently). Death Company marine and Intercessor units don’t gain experience points but they automatically passOut of Action tests and never gain Battle Scars. Instead each time you lose models in other squads to the Black Rage you can give one of these units 2 Battle Traits for a single game.

Your characters are a different matter, though similar to Death Company units, they never gain experience points. Death Company characters and Dreadnoughts can’t gain Honorifics, can’t be upgraded to Chapter Command (and they lose all of their chapter command upgrades if they succumb to Black Rage) and they can’t ignore or re-roll failed Out of Action tests – plus, if they ever fail one, they are flat-out dead, and removed from your Order of Battle.

Rob: This is a MASSIVELY WELCOME change to the rules, in my opinion – if there’s something Crusade desperately needs, it’s a way to make actual death happen, and the rules for The Flaw give you a really cool framework for telling the story of a character in your force, having them battle with the Flaw and ultimately fall to it.

Condit: The fact that this creates actual stakes for your units (however low they might be) is a really nice touch, and is the sort of thing I hope we see more of in the future. 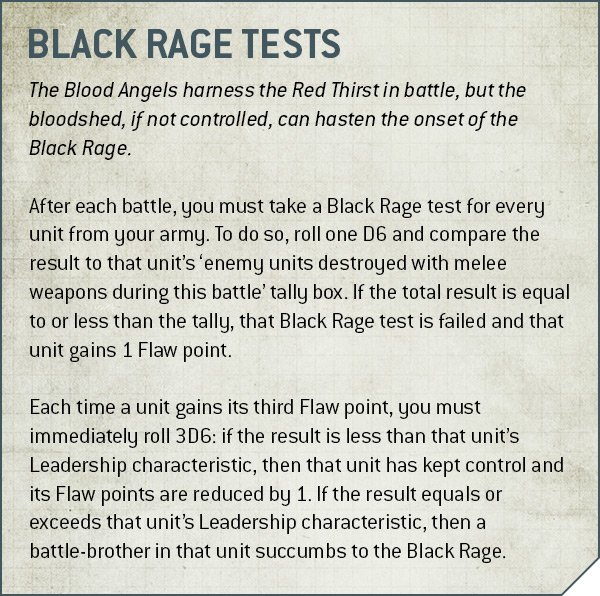 Blood Angels have four Agendas to choose from and these are unique in that two of them reward you for having a unit die, giving XP to other units in your army if you take the dead unit and remove it from your Order of Battle.

An Honourable Death in Battle lets your army score XP if a Death Company unit of yours is destroyed during battle and you opt to just remove it from your Order of Battle. Given that Death Company can’t earn XP anyways, you might think this is an easy pick – at least until you read on and see that if your Death Company unit doesn’t die, you don’t get any RP for winning the battle. It’s a really cool risk-reward mechanic. Purity Through Bloodshed rewards you for killing units in melee and lets you actually lower the Flaw points of a single unit after the battle if it killed enough things. Valour of the Angels rewards you for destroying enemy units in melee, heroically intervening, or dying. And Search for the Cure lets your Apothecaries perform an action to look for the cure to the Flaw and score XP based on completing the action.

These are… OK. An Honourable Death in Battle is pretty neat and anything that creates more interesting tension with consequences is a flavor win in my book, but removing a unit of Death Company from your Order of Battle doesn’t really matter much – they can’t gain experience, so you can just immediately slam in a fresh squad that’s just as effective. Search for the Cure isn’t great but it is kind of funny that it never actually finds a cure.

Condit: Search for the Cure also seems a bit superfluous in light of the Codex’s Recover Gene-Seed, which also gives XP to your Apothecary. I suppose if you really like guys carrying chalices around and wanted to field more than one Sanguinary Priest in the same game, this would let you give more than one of them experience at the same time, but let’s be honest here: you’re not going to do that. 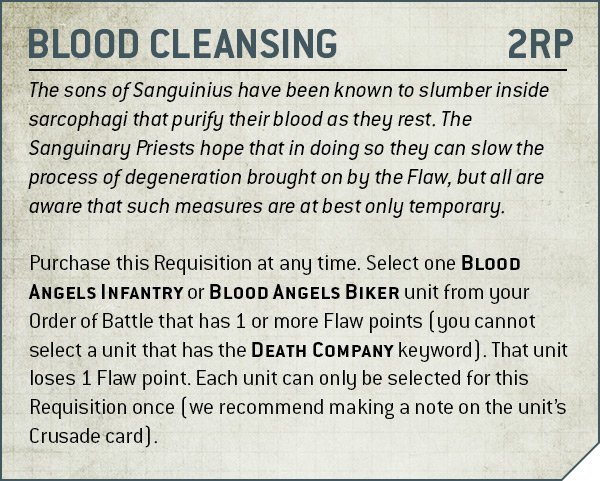 The Blood Angels requisitions revolve around the Death Company and Black Rage mechanics. Descent into Madness replaces the rules for adding a Captain or Lieutenant to the Death Company (The Lost) in Crusade, instead letting you spend 1 RP to convert a Captain or Lieutenant to a Death Company variant. Custodian of the Lost upgrades a Chaplain to let him help your units keep the Black Rage in check, allowing you to re-roll a single failed Black Rage test after each battle. Noble Heritage upgrades a unit to gain an additional Battle Trait once it hits 71+ XP, and Blood Cleansing lets you spend RP to reduce the number of Flaw points a unit has.

Descent Into Madness is welcome here, and Blood Cleansing is a good interaction with the Flaw though it potentially hurts Blood Angels by giving them something to spend RP on that isn’t unit upgrades and is potentially all downside. You avoid taking a Devastating Blow on a key unit, but it’s also something that other chapters don’t have to worry about.

Condit: Blood Cleansing is an interesting one – it lets you avoid a potential feel-bad moment that might arise from your army’s unique mechanic, though at a steep price. You won’t want it very often, but when you do, you’ll want it bad. 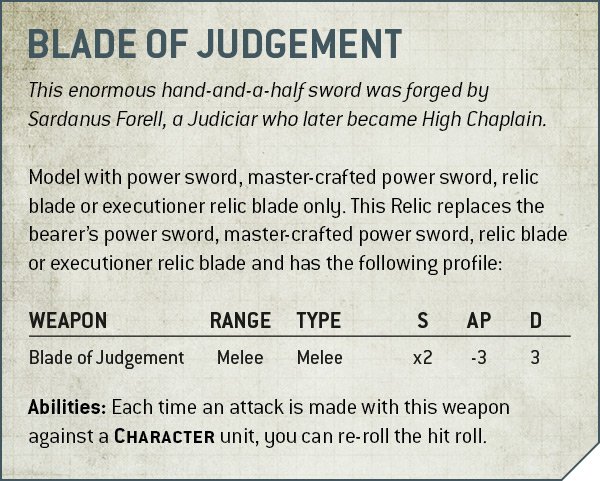 If you were wondering what happened to all the Blood Angels relics that disappeared from the Matched Play rules, well, they’re all here, and unlike Space Wolves – who just got a pair of Crusade Relics and otherwise had a bunch of stuff from Saga of the Beast vanish – there are two pages of Blood Angels Crusade Relics to give you access to the things you had in the 8th edition codex (and likely modeled on some of your minis). The Angel’s Wing returns for a Jump Pack model and let’s them re-roll charge rolls and stops their charge victims from firing Overwatch. Decimator returns as an Artificer Relic, and it loses a point of AP (it’s AP-1), but now it automatically hits its target when shooting. This can be pretty funny if you combine it with Quake Bolts or Vortex Bolts for guaranteed insanity. The Encarmine Warblade is the big Legendary relic for the Blood Angels, a new entry that replaces a sword with one that’s S+2 AP-4, deals 3 damage a hit, and every time you roll a 6 to wound the target takes 2 mortal wounds in addition to any other damage. Very nasty!

On the whole these are cool and it’s great to see a lot of things return that were left out of the Matched Play relics. If there’s a downside here it’s that Space Wolves didn’t get the same treatment, losing a bunch of Relics that would have been cool to have in Crusade as options. 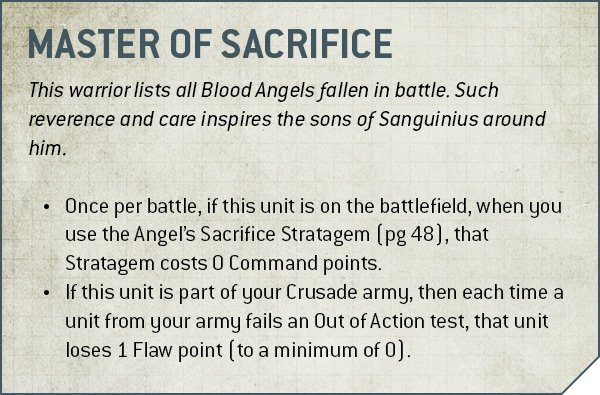 Similar to Space Wolves and Deathwatch, the Blood Angels have their own Honorifics that replace specific ones in Codex: Space Marines – Blood Angels can’t take Masters of the Keep, Arsenal, Fleet, Rites, Relics, or Chief Victuallers. Instead these are replaced by chapter-specific options like the Shield of Baal, protector of the Blood Angels’ homeworld, who gives you the ability to use a Battle Tactic Stratagem twice during the same phase once per game. The Master of Sacrifice Honorific lets you use the Angel’s Sacrifice Stratagem for free once per game and each time a unit in your army fails an Out of Action test it loses an extra Flaw point. The Lord of Skyfall gives you a free use of the Descent of Angels or Upon Wings of Fire once per game and you can get free Resupply and Repair/Recuperate Requisitions on your AIRCRAFT units.

On the whole these are neat and basically just Blood Angel-flavored versions of the Honorifics in Codex: Space Marines. They’re cool enough, but we’d have liked to see Battle Honours instead here (more on that in a bit).

The big thing missing from these rules is that there’s nothing for the Flesh Tearers. While it’s certainly fine that they can use Blood Angels Crusade rules, it would have been cool to see them get a single Crusade Relic and maybe a slight modification to their Black Rage tests/rules to represent the chapter falling rapidly to the Flaw.

The other thing we’d like to have seen is a handful of Battle Honours – this is the first book in 9th that doesn’t include any, and they definitely stand out as missing. The lack of any Weapon Enhancements seems like a particularly serious oversight given how much time the average Blood Angels puts into repairing, improving, and embellishing on their armor and wargear.

Rob: These are, on the whole, pretty good. The Flaw is almost all downside, sure, but it’s also really flavorful and I think that matters a lot more when it comes to Crusade armies. I think it captures the sense of playing Blood Angels pretty well, and the struggle to keep your whole army from turning into Death Company weirdos. They’re probably my favorite Crusade rules so far, but they’re still pretty flawed. Still, I’m hopeful for what we’ll see on future books if they can maintain this level of creativity, though I know that not every faction will have something as compelling as The Flaw to build around.

Condit: I’m a huge fan of the Flaw as well – if there was a supplement that I’d have expected to have a downside to play around, Blood Angels were definitely at the top of the list. Unfortunately, a lot of the other stuff in here doesn’t really do it for me – the Agendas are fine, but most of them are pretty situational, and the same goes for the Requisitions. The Crusade Relics are cool as hell, though, and shifting some of the 8th ed Relics into Crusade will let you build some interesting characters that wouldn’t be legal in Matched Play now that you can take more than one relic.

As always, if you have any questions or feedback, feel free to drop us a note in the comments below or email us at contact@goonhammer.com.