Welcome back, Dear Reader, to the sacred battlegrounds of the second BLUNDERDOME. For those of you who missed yesterday’s announcement on this year’s Blunderdome, you can find the article with more info on the event here. The short version is, this second Blunderdome is going super casual: We’re building 8 lists with none of the nonsense or complications caused by things like “FAQs,” “Balance Dataslates,” or “Points updates.” Just books used exactly as printed, for the most fun, casual 40k experience possible.

For this event, we’ve had our murderer’s row of competitive sickos build lists for our casual funhavers to play with. Each two-person group constitutes a team for the purposes of winning this team, and each competitive player is on the hook for teaching their casual how to play the list. In this article – and the next three – we’re going to cover the eight lists in this BLUNDERDOME two at a time, along with notes on the lists and the documents handed off to their pilots.

The new kids on the block and arguably the faction that started this whole mess, with a book that was insanely busted right out of the gate. The Votann boast incredible durability and some of the game’s best shooting, along with mechanics that all but guarantee anything in their sightlines will be destroyed. On top of that, they can be highly mobile thanks to bikes and transports, and their units are some of the game’s most efficient purely from a points-per-value standpoint.

In that regard, Danny P was perhaps one of the players most vocally on the side of “Votann are overrated” before the nerfs, and said as much in our roundtable. As someone who had played a large number of games with them pre-nerf, he was on board for building a degenerate list with them, knowing it’d be going into some of the most heinous lists ever conceived.

Generally speaking, Votann don’t need some of the boosts that come with this format – their stratagems all seem costed for Nephilim as opposed to the early days of 12 CP lists from Eternal War. And they may struggle on the GW terrain layouts which tend to limit line of sight to 24″ in a lot of cases. That said, one of their biggest problems – mediocre secondaries – will be fixed by having access to the Eternal War missions, where mission secondaries can compliment the wildly unbalanced secondary objectives in the Eternal War book. In particular, a model-based To the Last, Domination, and Bring it Down are all what you might consider “good eating” in this format.

Helming this list is Rocco, who you may remember from the occasional Yu-Gi-Oh article he’s written for the site. Normally Rocco plays space marines, and was an active uh, participant, and team captain in the Goonhammer Open Narrative event earlier this year. Rocco has never played Votann, but is eager to kill things with magna rails.

On the other, more ferrous hand, we have the Iron Hands, who haven’t been particularly relevant since 9th edition dropped but have a few nasty surprises waiting in store. While yes, they aren’t the faction they used to be when they could sit in Devastator Doctrine all game, their 8th edition supplement still has a number of nasty tricks it can pull that have since been nerfed substantially. Being able to halve incoming damage on dreadnoughts and reduce damage by 1 in a 6″ aura with the Ironstone are both nasty abilities, and being able to hand them off to nearby marines can lead to some very silly outcomes, even when Magna-Rails are involved. 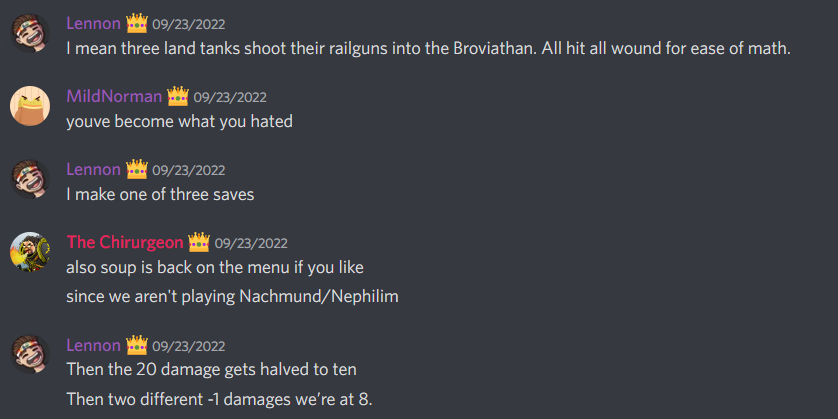 On the whole marines fare pretty decently when they get to use the Codex version of Oaths of Moment, and while the army doesn’t have a ton of damage output, what it does have is the ability to just not die and hopefully deliver a haymaker in response to an opponent trying to kill it off objectives.

Here we’ve tapped John Lennon from The Art of War to step in and build a list that modernizes the “Broviathan” builds of old. John’s as good as 40k players get, and very much misses when it was possible to play non-Blood Angel marines and win events. The Iron Hands get a lot of mileage out of the extra CP allotment in Eternal War missions, and can put it to good use. 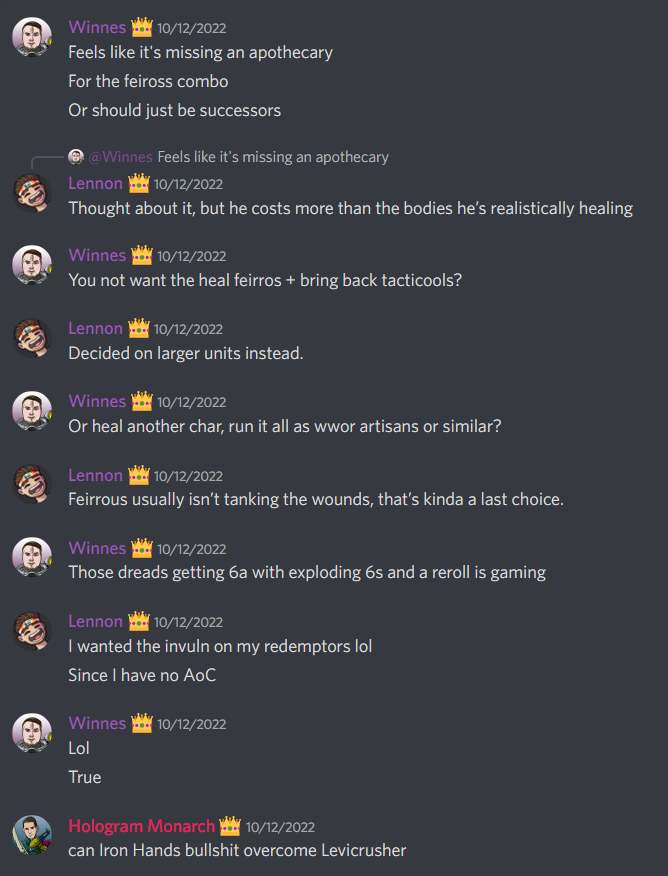 In true “Art of War Coaching” fashion, Lennon had more of a coaching convo with Condit, so I’ve transcribed chunks of that into the bullet points you see below.

Piloting this list is Condit, our resident Iron Hands player who is also very, very bad at 40k. It’s a perfect pairing, in the sense that he’s one of the three people on the planet who actually likes Iron Hands and knows enough about their lore to tell you the difference between their stupid houses/clans. He’s also one of the sharper minds in the Blunderdome, in that his brain has the requisite number of wrinkles to understand how the dreadnought wound handoff mechanics work.

Next Time: Drukhari and T’au

That wraps up our look at the first two Blunderdome lists, but check back in tomorrow for another pair of war crimes, along with notes on how to play them. We’ll be doing this all week, then talking about the games next week. In the meantime, if you have any questions or feedback, drop us a note in the comments below or email us at contact@goonhammer.com.