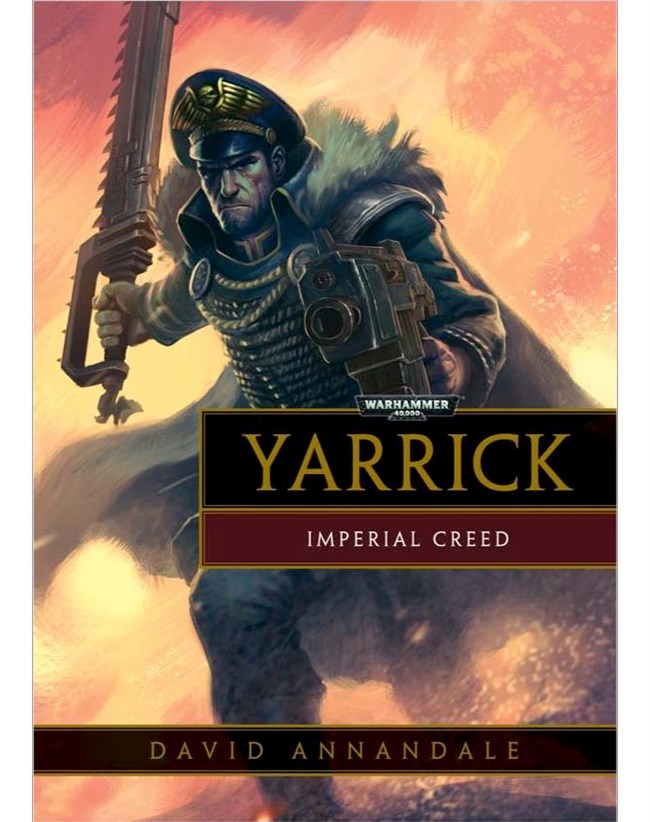 Ask any warham who the toughest human in the galaxy is and they’ll probably say Sly Marbo. Ask them who’s next toughest and chances are, they’ll say the Hero of Hades Hive, Old Man Armageddon himself, Commissar Sebastian Yarrick. He’s been in the game longer than our average reader has been alive, but it took until fairly recently to get some novels based on his story. It’s not too often named characters from the tabletop who aren’t Space Marines get fleshed out in their own series of books, and I found David Annandale’s Roboute Guilliman: Lord of Ultramar to be pretty dang good, so I was interested in this one.

For the first third of the book, I was hooked. Imperial Creed opens with a landing on Mistral, a windy world where competing Imperial barons have been jockeying for power since time immemorial. A newly-minted commissar Yarrick, his fellow commissar Seroff, their mentor Lord Commissar Rasp, and the 77th Mortisian Infantry regiment are assigned to quell a baronial uprising. They crush it quickly, and Yarrick’s crew are stuck on Mistral, where they become increasingly embroiled in its turbulent politics, namely those of its conniving ruler, Cardinal Wangenheim.

This politicking is the best part of the book. Rasp mentoring the young Commissars through galas and parties and after-dinner Amasec is a fun dynamic, and it gets into the “domestic 40k” side of things that is always so fun to explore. Annandale explores political scheming and corruption extremely well, and seeing that sort of device used without the punchline for every corrupt official being “they were Chaos worshippers all along!” is refreshing. You’ll still get plenty of worship of the dark gods and so on further into the book, but the idea that evil – real, self serving evil – can exist without the corruption of cosmic murder gods is a surprisingly grounded take.

All this politicking and consolidating of power is leading up to a big parade to show off just how cool and good Cardinal Wangenheim and the Ecclesiarchy are, and this is when things start feeling familiar. Having read Dan Abnett’s excellent Malleus, I know how parade scenes tend to pan out. Something bad was going to happen, it was just a matter of when. Well, spoiler alert: Bad Things Happen, and Imperial Creed turns from an interesting story about mysterious disappearances and the political side of these political officers into roughly 150 pages of nonstop combat, broken up into episodic little chunks. That Malleus parade disaster quickly becomes a Necropolis city siege which becomes the train mission from Goldeneye 64 and so on until the final boss battle. It keeps things moving, but the relentless action gets to be tiresome. The scale of these battles isn’t written consistently, so I don’t know if this charge under artillery fire is by a hundred men or a thousand, or if this street fight is half a dozen lasgunners or a whole company of Mortisians. It’s not all bad – the chapter describing a daemon coming into being and attacking the Mortisians is horrific and especially evocative – but it’s a lot of MurderDeathKill without clear stakes.

The action is broken up by frequent changes in perspective, from Yarrick’s first person narration to more general third person accounts from the rest of the cast. I didn’t find that the chapters from the perspective of the antagonist were that interesting or useful narratively. He flips from a scheming, connected politician into a dimestore Skeletor (missing nose and all) who just curses the name of the Imperium while torturing one of the book’s central characters in his giant murdercastle. I feel that the story would have been better served by sticking to Yarrick’s perspective, as rooting out who the baddies are makes it already a bit of a detective novel, and when the mystery is clearly spelled out two thirds through the book the reader is left without much to chew on.

I want to circle back to the characters for a moment, because while Yarrick is the main man here, the ways he interacts with the rest of the cast are where he gets all his development. Yarrick is a stern firebrand who can rouse even the most flagging advance, but he starts the story that way – he’s a commissar, after all. He’s shown to be merciful when he can be, sparing soldiers who are clearly out of their depth, but will execute someone who’s advocating cowardice, even if he feels some doubt afterwards. He picks himself up time after time to give inspiring speeches, even if he doesn’t always believe them in the moment. The way he’s written to close himself off to those doubts is sad in a way, but it’s the sacrifice he makes for his office. He gets some fun back and forth early on with Seroff which is somewhere between old college buddies hanging out and soldiers in the field, but that falls by the wayside when everything starts exploding halfway in. I wish they got more time together later on, as Seroff isn’t given a whole lot to do once the siege starts. Where Yarrick really is tested is when he meets Inquisitor Krauss, another young upstart who is hardline, even compared to the commissariat. Their scenes together compare and contrast the “make it look good for the cameras” actions of a political officer versus the scorched earth machinations of the Inquisition. It’s important to have a foil like Krauss in a story like this where your supposed hero is a guy whose job is shooting their own men on the regular, as it’s hard for the reader to side with the Inquisitor who’s ordering mass executions in the streets. The rest of the cast is fairly thinly drawn, although I enjoyed Sister Superior Setheno and how her Sisters of Battle squad was contrasted with the Mortisians. She’s a no-nonsense character (we got a lot of those here) who is dogmatic without being blind, and I wish she had more space to develop.

We must never forget that this is, for all intents and purposes, a prequel to the miniature. On at least three occasions, there is a line that follows this template:

“A bad thing happened. It was nothing compared to bad things that would happen.”

This is fine once, but it appears with such regularity that it gets grating. It’s a cheap hook to make the reader think something really important is right around the corner, but in the confines of this story, it rarely delivers. These frequent allusions to the future serve the framing device of a story being narrated by an old veteran like Yarrick, but rob the story of its drama. If this is nothing compared to this other story you can tell, why aren’t you telling us the more interesting one instead? I can set aside the typical prequel problem where you know the hero will survive, but I should at least be getting a good story out of it. I also would have liked it if Yarrick started out the book a little further from the commissarial ideal, as we know his arc is the iron-willed, no bullshit young man growing up to become the iron-willed, no bullshit old man, and no throwaway lines about a tingling in his right arm and left eye will change that.

If the whole book was as good as the first 150 pages or so, I would have no problem recommending it. Unfortunately it falls into tropes and scenes many of us have already read before in better books, and a tie-in to a beloved old metal model won’t change that.