ButtScribe: Printed Materials For You and Others

Good Datasheets for Your Bad Army

ButtScribe is a tool that, like many things in my life, was caused by TheChirurgeon complaining. He wanted customized datasheets to take to games and was looking at creating bespoke InDesign files, and I’m a big-time nerd who just had finished a project involving dynamic PDF generation for my actual job. So I fired up BattleScribe, drank like six beers, and ran with it. The main idea of ButtScribe is you give it a BattleScribe file, and in return you get this type of thing: 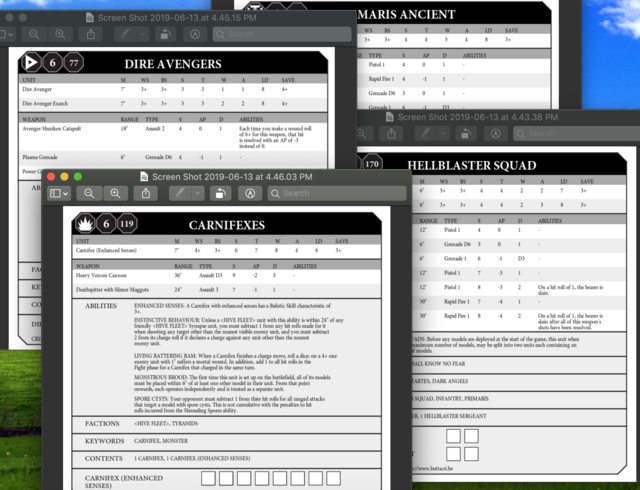 Yeah, I arranged a bunch of screenshots and then screenshotted them again, because I’m terrible at PhotoShop. Also yes, I use the Windows XP default background. It’s relaxing.

Mostly we wanted something that looked better and used less paper than a native BattleScribe printout, but was easier to flip through than a rulebook, and contained all of (and only) the information you might need during a game.

ButtScribe has technically been a solo project, but I want to include the community in here. I no longer have the functioning non-pickled brain cells to come up with thoughts, or the time and energy to do anything beyond basic testing, so ButtScribe only exists in its current form because the Goonhammer community contributed their feedback. This isn’t even a pain in the ass, I’m genuinely appreciative of everyone who cared enough to use it, let alone offer comments.

Previous versions would just download a PDF, but the latest update will now (for .ros/.rosz files only, not HTML, though due to technical bullshit I highly recommend saving as a .ros instead of the zipped or HTML versions) give you a link to that same PDF, and also generate a separate image with an army summary: 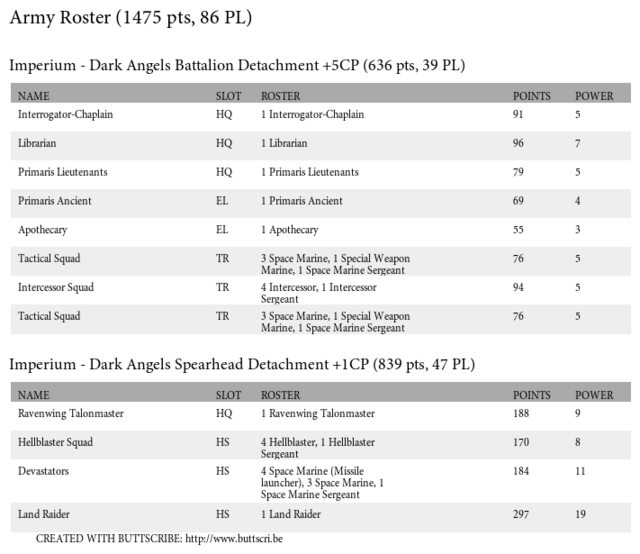 So far this has mostly been useful for me to post in Discord and get clowned on for being bad.

The PDF links get turned over after a few days, but the images stick around for checks crontab about two months, and you can embed them in forums posts and Discord, at least until I get a huge AWS bill and cry and have to retro-actively declare that to be “image leeching”, at which point I may or may not update this post. Also the URLs are randomized, so you can’t just type in random stuff and look at other people’s lists, probably.

Anyway, here’s another link to ButtScribe, and some FAQs.

This FAQ, and all 32 other of my FAQ/Walkthroughs, are now dedicated to the over 3,000,000 innocent people killed in the Dropsite Massacre and Word Bearer terrorist attacks on Istvaan V and Calth, in 006.M31. To all of the innocent Imperial Army, and Legiones Astartes, as well as other expeditionary fleets, you will always be remembered. We won't stop until we bring the traitor legions to justice, your deaths were NOT IN VAIN! God Bless the Imperium, death to all xenos of all races everywhere.

1. Upload a file and hit the submit button.

Pro Tip: You can shave off a few ms of load times by disabling images in your browser. Happy speed running!

Q: You name software the way a child would?
Correct. Due to personal reasons, I am the least acceptable person.

Q: It broke, or I have an idea for a new feature, how do I harangue you about that?
Technically the GitHub repo has a bug tracker, but given that I just checked and there’s a report from approximately last year that I’m only now seeing, that’s probably not a great resource. Sorry, whoever submitted that. You can send an email to contact@goonhammer.com though, and someone will probably see it.

Q: What are some specific things that I might want but can’t have?
Apologies for the tortured phrasing mandated by the FAQ conceit I’m using here, but I can only include things that BattleScribe structures into their XML. By way of example, this means that ButtScribe can print the rule that says Abbadon gives you +2CP on his datasheet, but it can’t list his detachment as a 7CP Battalion. For similar reasons, it can’t show you your free Relic in lists, or deduct the CP for using Specialist Detachments. These are things that tournaments often require, and that I’d love to include, but currently can’t.