This is part of a series on core cards for playing Commander, focusing on sort of “generic” cards that fit into a variety of decks, based on color identity, and aren’t necessarily tied to a specific game plan, but ought to be at least considered for any deck they can go into. Last time we talked about Fast Interaction; this week we’re talking about Free Interaction.

Before we dive in, you can find these packages on Moxfield, ready to add to any deck you build. Just trim out the cards you don’t want.

Free interaction is really really important because it’s frequently the key to making your opponents overextend, or allowing you to finish the game. There are simply too many things to keep track of in a given game of Commander; it’s hard enough to track the board state, let alone keeping track of cards that might be in your opponents’ hands. You also can’t really grind out a game of commander in the same way that you might 1v1, going for card value, trading up a little, keeping track of cards in hand, and trying to essentially create more threats than your opponent can answer. You’ve got 3 opponents so if you create too many threats someone is liable to cast a board wipe or overload a cyclonic rift, essentially upending your apple cart.

There’s generally a moment in Commander where you have to just go for it, tutor for the combo piece, cast your commander, drop your Thassa’s Oracle and hope to resolve Demonic Consultation. Zero mana cost interaction spells allow you both to defend your combo and to disrupt someone else when they try to grab the win, and they’re key to getting your opponent to underestimate your board state. They also allow you to devote your mana and your resources to developing your board state, more or less safely tapping out. If you hold up mana every turn for interaction, then you really won’t get much out onto the board, and you’ll be outpaced by your opponents. 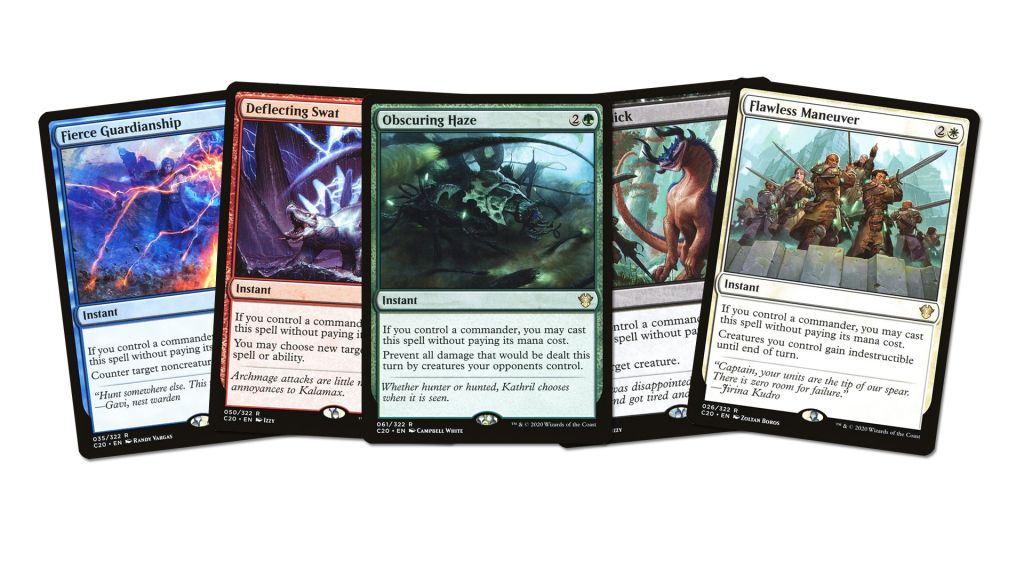 There’s a reason that the Ikoria commander decks skyrocketed in price – they each contain a piece of free interaction, though as is often the case, Blue’s is arguably the strongest, with Red and Black close behind.

Counter’s a non-creature spell, so occasionally won’t allow you to block a piece you might need to, but almost always either ends a combo or protects yours.

Misdirect on steroids, since this allows you to change the target of a spell or ability.

Exiles a creature, without regard to its color or artifact status, for free when you control your commander.

Still really strong, giving indestructible lets you survive a board clear, and for free means, you can combine this with something like Wrath of God fairly early to keep your creatures alive while destroying everyone elses.

Sadly the worst of the cycle but still with some powerful side effects, will protect your creatures through multiple attack phases, or stop a commander like Najeela, Blade Blossom or, can also be used to shut down a combo like Niv-Mizzet Parun and Curiosity. 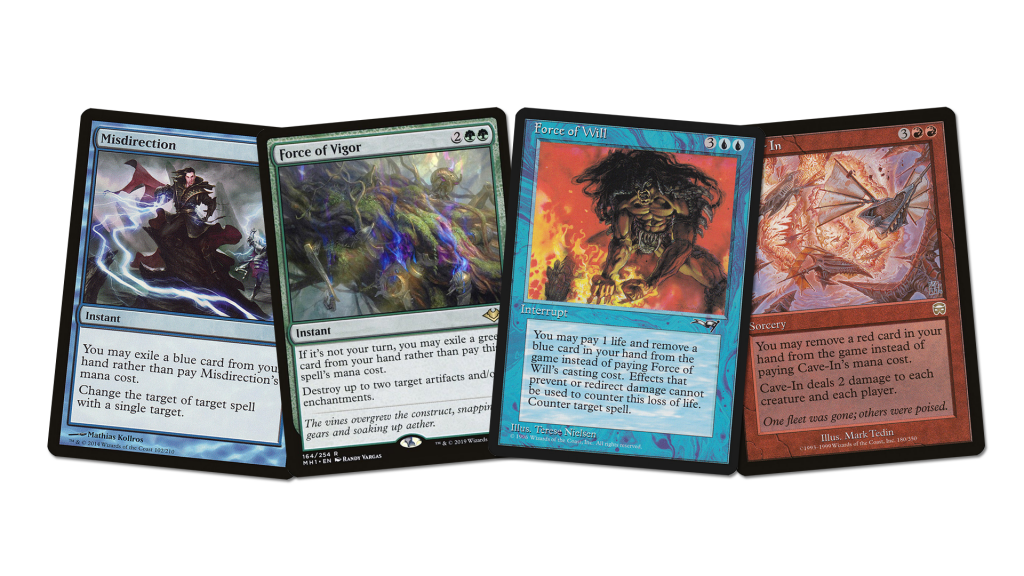 First introduced in the Alliances expansion, Pitch cards give you a way to cast them for free by discarding or exiling cards from your hand (i.e. “pitching” them). Getting something for free has always been a powerful mechanic and Force of Will has remained one of the game’s best spells since its first print run.

Just a stupendously powerful great counterspell, arguably one of the strongest of the free interaction spells since it has no limitors. Will counter creatures or non-creature spells. So good and iconic that a whole cycle of pitch spells was named for it.

Significantly weaker than Force of Will and doesn’t see much play since it’s limited to creatures, if it allowed players and Planeswalkers I think there’d be a lot more call for it.

This is likewise a pretty strong spell, it doesn’t see too much play simply because blue has so many truly strong counterspells and interaction. If this was a white or green spell I think it’d see a huge amount of play.  Nonethless, if you get into a counter war you can use this counter another one of your opponents spells with the last spell they cast, particularly if you’re trying to stop your opponent from going off.

Sadly a sorcery, but decent damage-based board clear.  Unfortunately, it only deals 2 damage, which misses a lot of strong commanders.

This, can’t be used free on your turn, but it exiles the target, which occasionally matters, such as to get rid of a spell with flashback or that matters when it’s in your opponent’s graveyard.

This is pretty strong interaction for green, and it destroys up to two targets, which is one of the few pitch spells which doesn’t theoretically hurt you in terms of card advantage, but in a 1v3 game that doesn’t matter as much.

Basically, an R cost misdirection, only really good for shutting down counterspells for the most part, though can hard cast it at times.   Generally seems to underperform, but still a viable option.

This requires you to exile 2 other cards, but instead of counter a spell or exiling it, it lets you take control of it, which is really pretty powerful.  Stealing someone’s big artifact (Bolas Citadel for example) is pretty satisfying.  Sees most of it’s play in Yuriko, where having a high mana value is actually an advantage and the deck draws a lot. 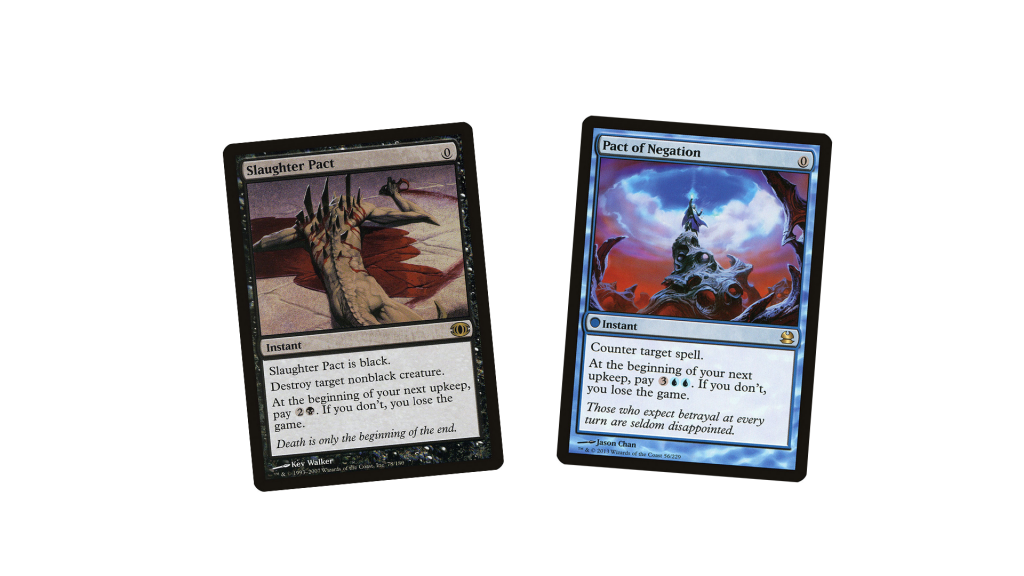 Pacts were first introduced in Future Sight as a way to model a mechanic based around borrowing from your future self. They cost 0 mana but require you pay their cost at the beginning of your next upkeep or you’ll lose the game.

I’d like to interject a note about sportsmanship here, in my opinion, if someone is going to win, and you use a pact to stop them with no chance to pay for it on your next turn, that’s not really “competitive play”. There’s arguments to be had both ways, but if you can’t see any way you’d be able to pay the upkeep, then you shouldn’t use the spell.

Just straight up counter a spell, have to pay 4 on your next turn.

Destroys a creature, but only nonblack, and it’s future cost is only 3, which is quite solid. 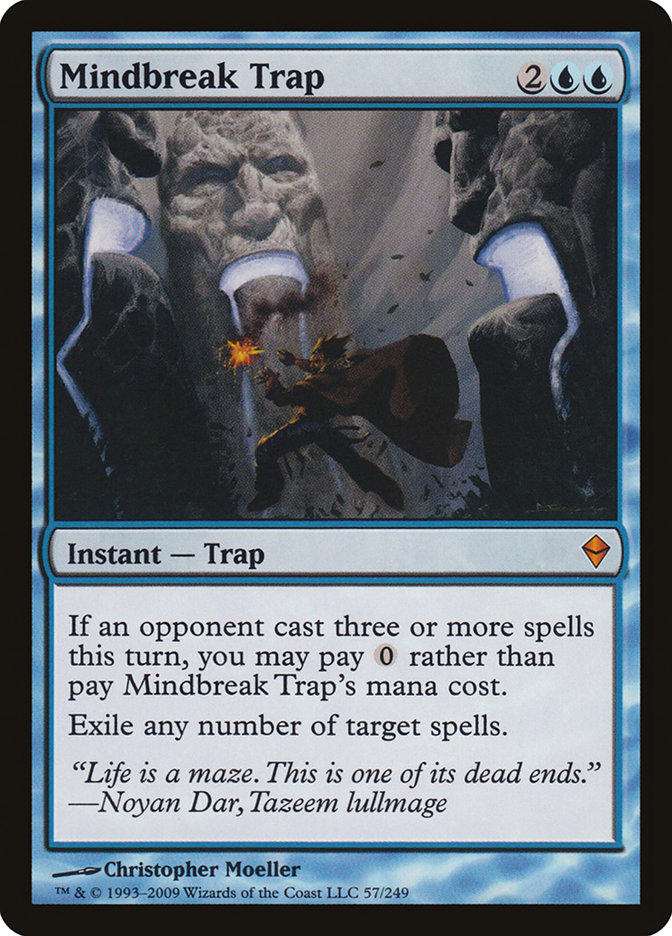 This can be a hilarious way of shutting down someone in a counter war, though it’s rare enough and there are so many better options that it doesn’t see much play.

Requires to sacrifice a mountain, but can save you in a pinch, and at 3 mana to deal 3 damage isn’t totally unplayable for its hard-cast cost.

Especially given white’s propensity to get more plains from the deck with cards like Land Tax and Tithe, white can often afford to pitch plains, and at 3 mana value isn’t so bad to just hard cost.

Can protect a creature someone is trying to kill, or be used to pump a commander for a kill, the 4 life can be directed at an opponent for political reasons or just straight at the guy you are killing off with your commander.

This is really strong creature control, costs you 4 life, and doesn’t destroy black creatures, but nonetheless can often blow up a commander early and seems to perform really well to shut down an early rush out of a commander that might otherwise imbalance the game.

Have any questions or feedback? Have a request for a future package you’d like to see us cover? Drop us a note in the comments below or email us at contact@goonhammer.com.