We’re big fans of wargames’ unique ability to bring communities of like-minded individuals together. Today we’re interviewing Joseph Pascarella, one of the founders of Long Island Wargames, a gaming club in New York.

Tell us about Long Island Wargames – When did it start and what made you decide to start things up?

Long Island Wargames was born June 22nd of 2021, so we’re just over a year old. We are a tabletop wargaming club centered on Discord and based out of one of the few local gaming stores here on Long Island. We have over 200 members on our Discord, we just hit 50 members on our free membership, and we have over 20 members paying for our yearly membership (which includes a 10% discount at our LGS). Our future goals are to become a 501c7 non-profit sometime next year so we can really start raising funds that we can then invest in a 24/7 clubhouse for our members: tables, member lockers, couches, TV, etc. Everything we do is to foster the community we serve.

Long Island, by its very nature, is an isolated community and there’s rarely anyone “passing through” our communities and towns. I had been a member of a few gaming clubs before but none of them really “thought big enough” for me. The way I saw it was that the gaming community on the Long Island was desperate for some sort of organization and collectiveness, considering we’re all part of the wider community, whether we like it or not.

So my plan was to create a Long Island wargaming group that was open to everyone: the competitive players, the narrative players, and the hobbyists who have never played a game of Warhammer before but still like the lore and to collect the models.

The main goal of LIW is to gather the community in one place and then support the hell out of that community to help it to grow.

Space in and around NYC can be difficult and expensive to come by. How did you get started and recruit people, and where did you find the space to organize?

For the first few months our space to organize was Discord (which is still our main form of member interaction) and we started to grow the community electronically instead of physically. From there we found a LGS on the island that had play-space for Warhammer-sized games that we could use for our weekly Hobby Hangout and Fight Night events. From there we developed a relationship with the store staff and ownership and we started hosting tournaments and narrative events. We have been very lucky to have LGS support; it is invaluable to the individual players and the group to have a welcoming and consistent space for our burgeoning community to meet and play.

LGSes are hard to come by on the island, and the few you do find are either your more traditional hobby shops where they may sell Games Workshop products but do not have space for play, or they do have space to play but it is dedicated solely to card games such as Pokémon and MTG. I’ve been a part of a few gaming clubs (the actual “core” of the hobby experience in my opinion) and they tend to be held either at a LGS or in someone’s garage or basement, but I find Discord to be an invaluable resource for sharing photos of hobby progress or tweaking lists and asking for advice. 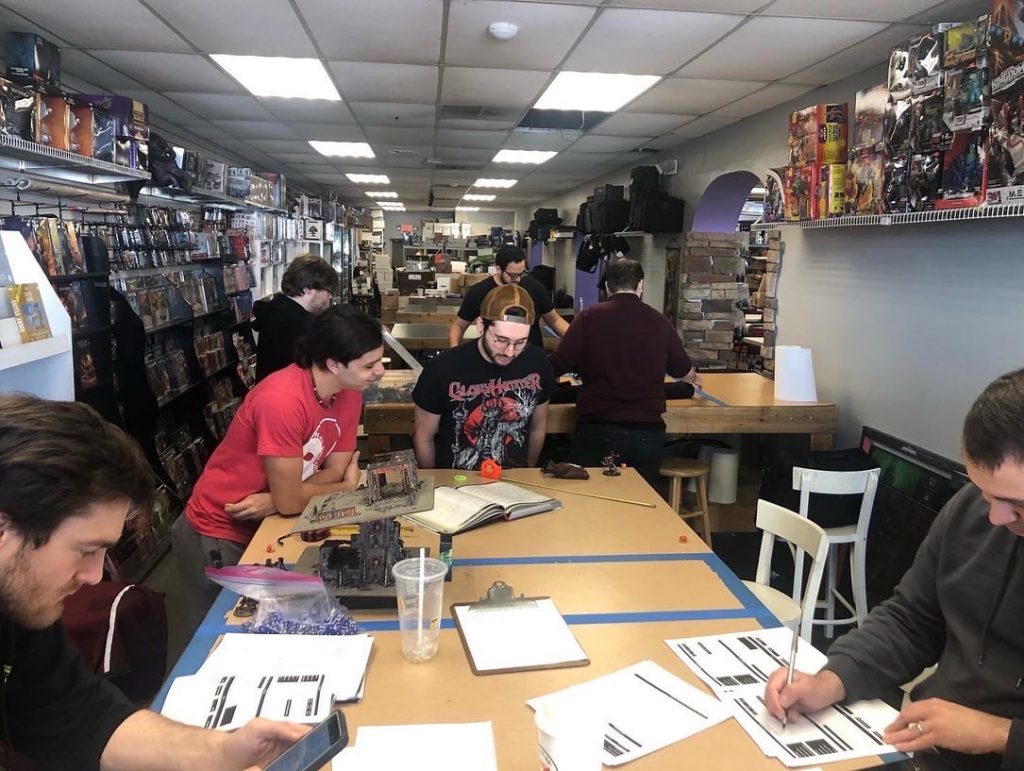 What kind of events do you run with the club? What games do you get up to?

So we started with a weekly Tuesday Hobby Hangout in which we would meet and just hang out while doing classic hobby activities: assembling, painting, forming a real community. We quickly outgrew a single-night event and added Thursdays as Fight Night, with a focus on players of all skill levels play various games. From there we developed the Eternal Crusade League (ECL) a narrative-focused Warhammer 40k Crusade league and most of our focus goes towards developing and hosting narrative events for our members. We are also going to be taking over running Warhammer tournaments at our LGS as well, which began with our first 40k Kill Team Tournament this past month and will grow to include standard 40k in the near future.

Right now most of our members are playing Warhammer 40,000 as part of the ECL but we are ramping up towards the current campaign’s end: a giant apocalypse game in September. After that we will be transitioning into a Horus Heresy campaign / league for the rest of the year and then Q1 of next year we will be running a Kill Team league and will putting on a Kill Team tournament and demos during the 2023 Long Island Tabletop Gaming Expo.

We started as a Warhammer exclusive club but we quickly grew to include other games such as BattleTech: Alpha Strike, Deadzone, Minecraft, and Among Us. We’re also in the process of starting a local and online, weekly LAN party at our LGS where we play games like Super Smash Bros., Halo, and Call of Duty. 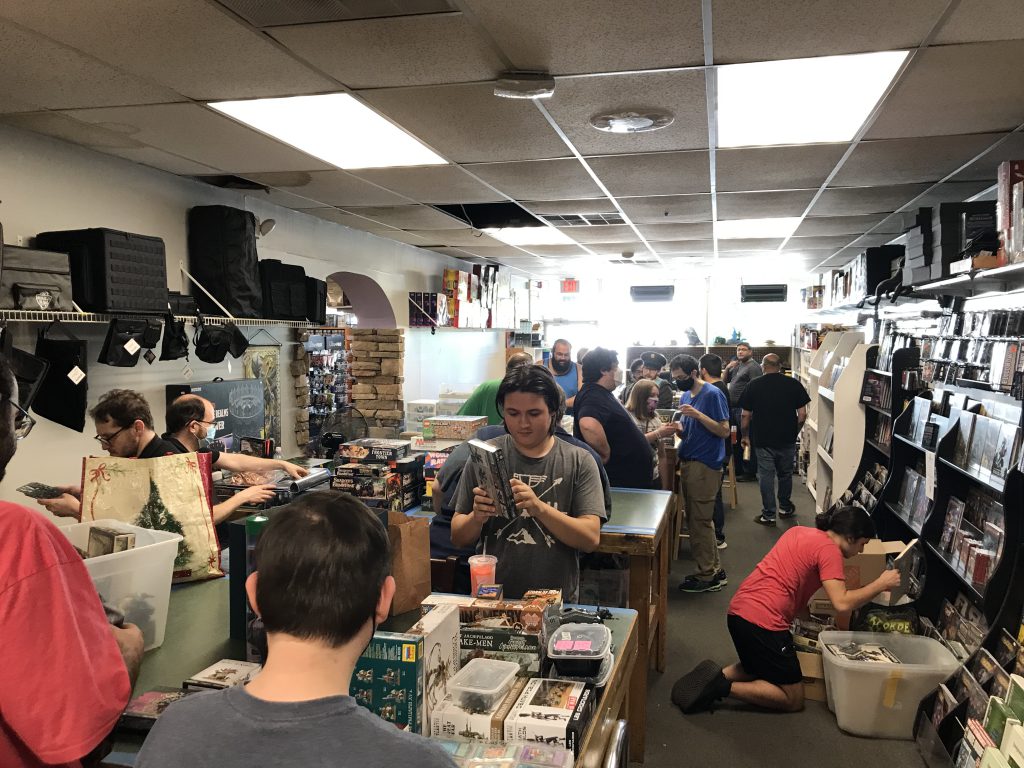 Tell us more about the Eternal Crusade League – how’d that start and how’s it currently going?

So the Eternal Crusade League started as a simple Warhammer 40,000 Crusade-league, starting with an escalation-type format to begin and then once the escalation game was over, players could just keep playing (read ‘eternally’) with their army and growing it. From there we decided to incorporate the idea of ‘seasons’ (basically subsequent escalation-style campaigns where new players could join and escalate or old players could bring in veteran units or add new ones to their rosters.)

But things really took off once we developed the idea for the Ignotus Sector, a large swath of space in the Warhammer 40,000 galaxy that we would use as our sandbox for every narrative event we put on as a club. Our ECL 40K explores the Ignotus Sector following the opening of the Great Rift, our ECL Horus Heresy will explore the Sector while it was being brought under Imperial Compliance during the Great Crusade and the following chaos of the Horus Heresy, and our future ECL Kill Team (and Necromunda) league will explore the Sector during the 10,000 year period between the Horus Heresy and modern 40K.

And it’s not just an idea on paper, I am using tools such as AstroSynthesis and Campaign Cartographer 3 to bring the Ignotus Sector to life and populate it with hundreds of planets with atmospheres, populations, and lore for players to explore and conquer! Our goal for Season Two of the ECL 40K is to allow players to fight and conquer over 100 planets, with the winner being able to name and write as much (or as little) lore for the planet as they want.

The ECL is my baby and is one of my favorite creations and I can’t wait to have the players begin to explore and uncover new lore and story tidbits that I have written. I really want to flesh it out and make it an integral part of the wider 40K universe for my players. We plan on using our website, LIWargames.org, to deliver the lore and short stories written about the Sector, while also hosting editorials like LIW Meta Watch, and showcasing our local players and their armies and lore.

And it would be so much harder to run and organize this league without the help of Goonhammer’s Administratum, what a great tool! 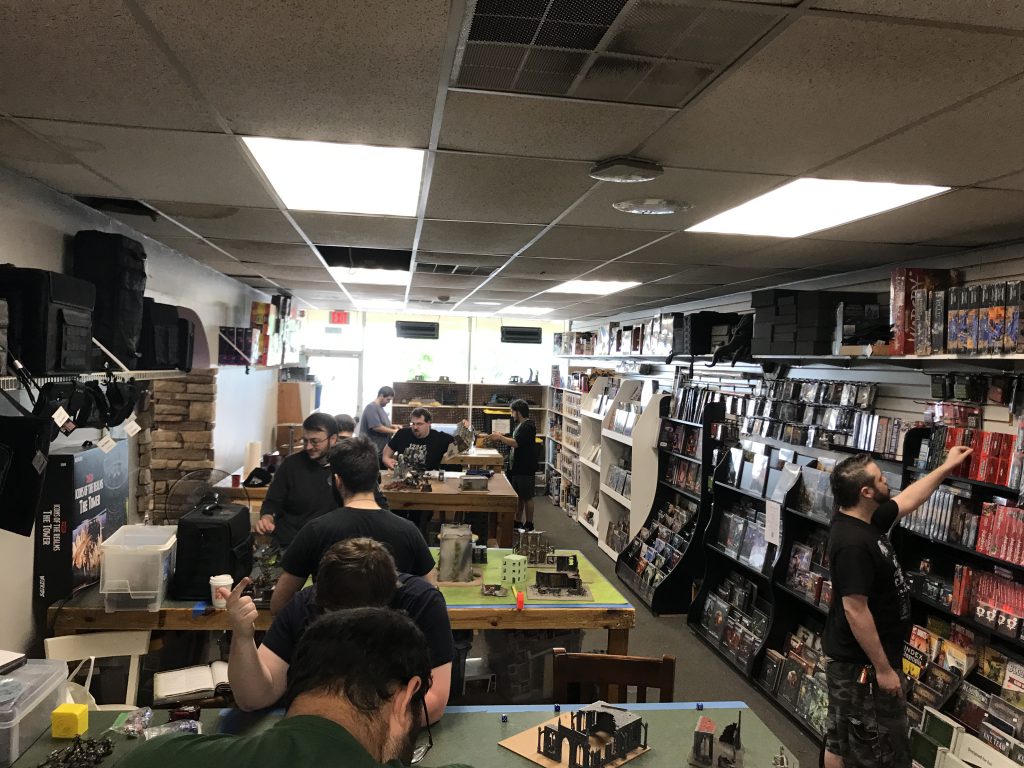 For those poor, clubless hobby souls in the NY area – how can they get involved?

By joining the server! We are open to everyone, not just the players on Long Island! They can definitely get in touch with me and I will be more than happy to help them either set up their own Discord server for their gaming club, or we can set them up with a specific category and channel in Discord made specifically for them and their friends! The main way they can get involved is to get in contact with me and I will do everything I can to help them grow their hobby and their community. We are currently in the process of running online events where we all come together to play Battlesector, Minecraft, Among Us, and Project Zomboid.

We actually just wrapped up LIW’s first Golden Demon painting competition, all held completely online through Discord! We have so many activities for players who don’t play ‘traditional’ 40K style games. Gaming is a part of the hobby but you can hobby and never actually play a game.

I’m an odd duckling when it comes to Warhammer as playing is actually my least favorite part of the hobby; I would much, much rather be a host and organize and do what I can to help my members have fun and a good time. Hosting and organizing is very much my favorite part of the hobby and LIW helps me to do that tremendously. If anyone needs help getting their own local-gaming-group set-up, they can reach out to me on Discord by messaging me at Eras3r#1424 or emailing me at Joseph@LIWargames.org!

Have any questions or comments? Drop a note in the comments below or email us at contact@goonhammer.com.