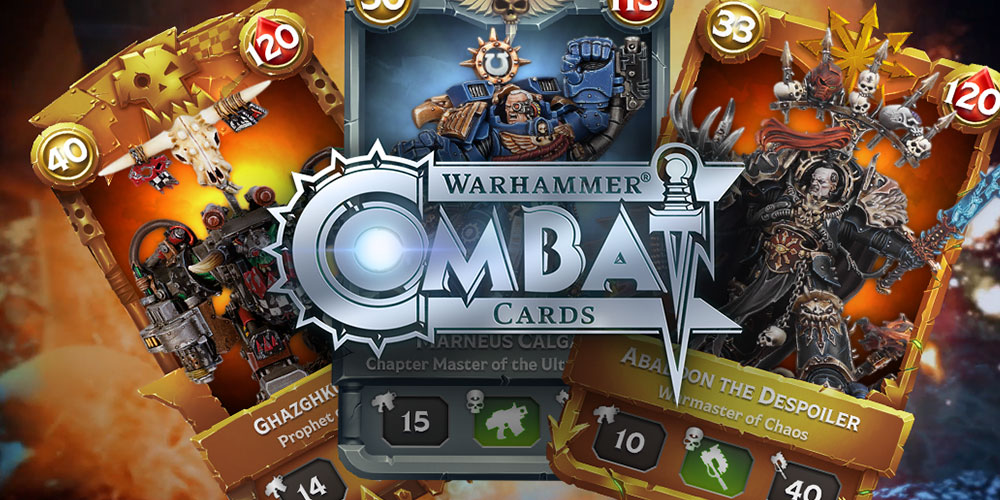 As you always knew it was destined to, Warhammer 40K has gone free-to-play, just like every other IP out there. And I’ve run out of full-platform titles to review for the moment — at least ones that don’t require hundreds of dollars like Total Warhammer, or require backsolving to make them compatible with modern machines — so today we’re looking at Warhammer 40K Combat Cards, a free-to-play mobile game.

I don’t play many mobile games; to be honest, I respect how they lock you out of engaging with their content too much, with all the timers and cooldowns. Which isn’t the business model. The business model is supposed to be that you do the gameplay loop, get annoyed with the timer preventing you from achieving the reward, and then spend real money in the real world to get your gratification instantly. This model has been intensely profitable, but on some hideous dark-mirror version of the 80-20 principle — 20% of the users are responsible for 80% of the revenue. If you keep abreast of the gaming press, you might be aware that this model sort of hit its zenith — or more honestly, its nadir — with Elder Scrolls Blades earlier this year: timers on everything, with premium currency right there to buy them all away, starting at $3.99 from your bank account. Or, presumably, for some number of players, their parents’. 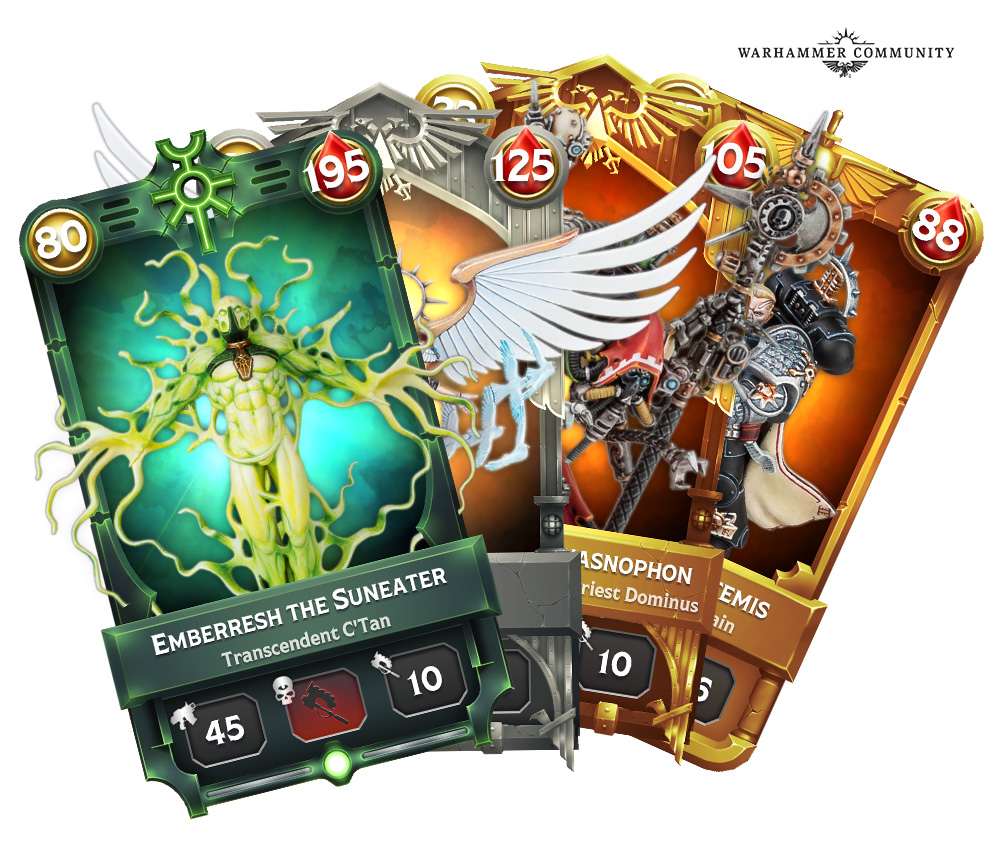 Combat Cards isn’t so exploitative, but mainly because it isn’t exerting itself so hard in that direction. It’s a perfectly cookie-cutter example of the genre: you’re playing a card game where larger decks means better decks, more card variation means better decks, and you can recycle multiple copies of cards into more powerful versions of the same card. This means you always want more cards, of course, and cards are gated behind wins (unless you just want to buy packs for real money), and the packs you gain from those wins have timers. So it goes.

To the extent that there’s anything truly objectionable about Combat Cards, it is that it’s not particularly interesting from a strategy perspective. Many battles feel almost deterministic: this deck beats that deck, unless the person playing the stronger deck messes up. This is true of any card game — any strategy game — that relies on accumulation of outside resources over time (Magic: The Gathering comes to mind) rather than an equal starting playing field (as in chess, or in go), but in Combat Cards your hands are tied from doing anything approximating skilled play so that you can get through matches as quickly as possible — this is, after all, a mobile game you should be able to pick up and put down at a minute’s notice.

So instead of any convoluted mana or in-game resource system, you simply place three cards on the board to start the game — the order does not seem particularly important at low-level play — and hold the rest of your deck in reserve. If one of those cards is your deck’s leader, that card immediately goes to the center. If one of those non-leader cards dies, it is immediately replaced by the next card up (thus, why having more cards in your deck — gated behind player level, naturally — is strong). If your leader dies, you lose the game.

Combat between these three-on-three teams is adjudicated in a sort of truncated team rock-paper-scissors. You can make a Melee Attack, a Ranged Attack, or a Psychic Attack on your turn. All three of your cards will perform this. Whichever attack type you do not perform, a meter fills on the others which makes them more powerful, rewarding you for variety. Your cards will do the designated attacks, and then your opponent’s cards will do their version of that kind of attack in return. Not every card has every kind of attack, and psychic attacks are the most rare — additionally, they buff your ranged and melee attacks more, and will debuff one of the opposing player’s attack types. However, you’ll rarely be able to do any real damage with them (until, presumably, higher-level builds than I’m willing to achieve in a free-to-play treadmill). 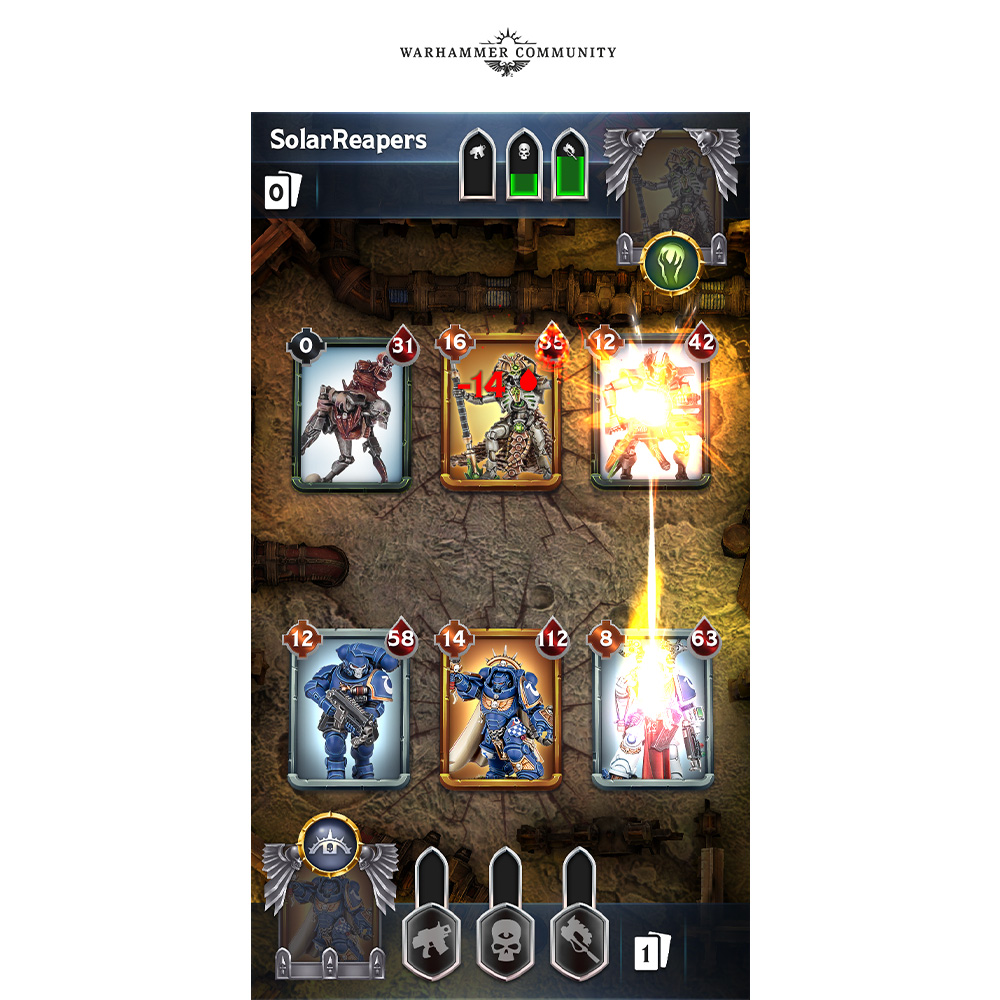 I’ve played five games; I haven’t lost yet. I suspect I’m playing against bots because no players were available at my level, because the names were too-neat things like “BloodyRoar” and “krull” without any numbers or tags, but then, perhaps those weren’t required. I reached level 7, upgraded some cards, and was looking forward to jumping over to the Campaign mode where apparently I’d play some sort of gauntlet against the AI using specified decks built for-purpose — but at this time, at least, that event was “coming soon.” Apparently they happen at a specific time of the week and I was just out of luck. Oh well.

I could see dropping some real time into this if I…well, if I didn’t have any other options. It’s certainly more involved and interesting than gacha or mobile pachinko games, but in a way that sort of makes it worse: there’s just enough thinking involved to make me wish it was a more robust card game (we’re not even talking M:TG here; Gwent would have been fine) rather than just making me resign myself to the fact that I’m doing a form of gambling specifically designed to skirt national and international law regulating the operation of gambling houses. If I really did play and defeat five bots in a row on a Friday afternoon and a Monday afternoon and night, then there’s no players active at peak hours at the lowest level of the game; if I beat five real players in a row — some with more cards than me in their deck — then either I’m incredibly lucky or the threshold for decision-making skill it takes to succeed at this game is very low, and match outcome is basically pre-determined by card input, because it felt very easy to quickly identify optimal play using the basic starting Space Marine cards I was given.

Final Verdict: It won’t cost you anything but time if you decide to install it and avoid the siren song of the pay shop, so if mobile card games that run 4-6 minutes at a time are your thing, then this is one of those. But the point of these games is to hook the player and make them spend money. I never felt that hook in my mouth.