This week the Historicals crew are diving into the mechanics of Sharp Practice, starting with movement and kicking off a series on the ruleset that we’ll continue over the next few weeks.

We’ve talked quite a bit about painting, uniforms, and units, but haven’t delved too deeply into game mechanics yet. In the next few articles we’re going to go in-depth on the mechanics of Sharp Practice, one of our favorite rulesets. I’ll be using this for American Civil War, so I won’t be focusing much on certain tactics or movements from other wars – like the attack column of Napoleonics, or massed cavalry charges, for instance. Movement is the most basic mechanic of most rulesets, so we’ll cover that first. We’ll be taking a look at most movement rules today so you can get an idea of how to get started. 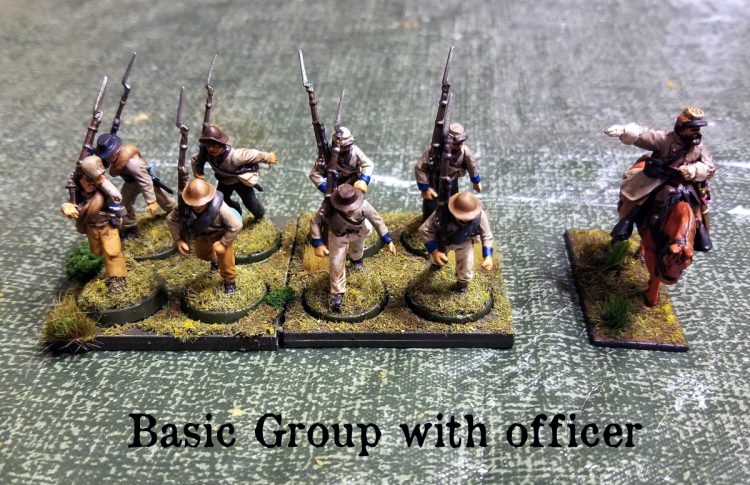 Above is a basic group of infantry for the ACW period – eight men with an officer. For the sake of the demonstration, he’s Status Two. They always operate in stands of four guys together. 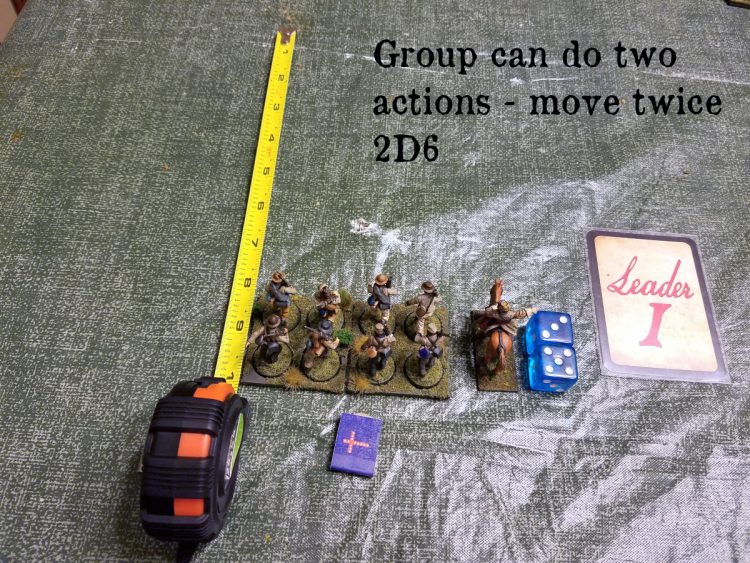 When the leader’s card is dealt, in this case number one, he can command a group or formation to do two actions (this is one of his initiatives, out of two). In this case, this group has chosen to use two actions to move – so they roll 2D6 and move that far. I’ll talk more about the random movement later.
One thing to mention here is that the men move as far as they’ve rolled, unless the officer prescribes a certain point – like move up to that forest, move in line with that unit, etc. Then they can stop early. 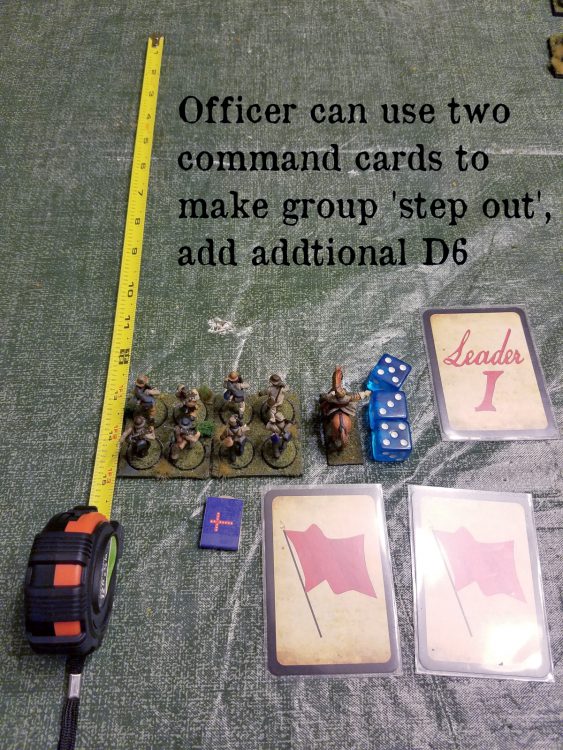 The officer can also use two command cards to make the group ‘step out’. The number of cards used to do so is based on the troop quality, motivation, and period, but two seems fairly standard. The commander is urging his troops forward. They gain an additional die of movement. 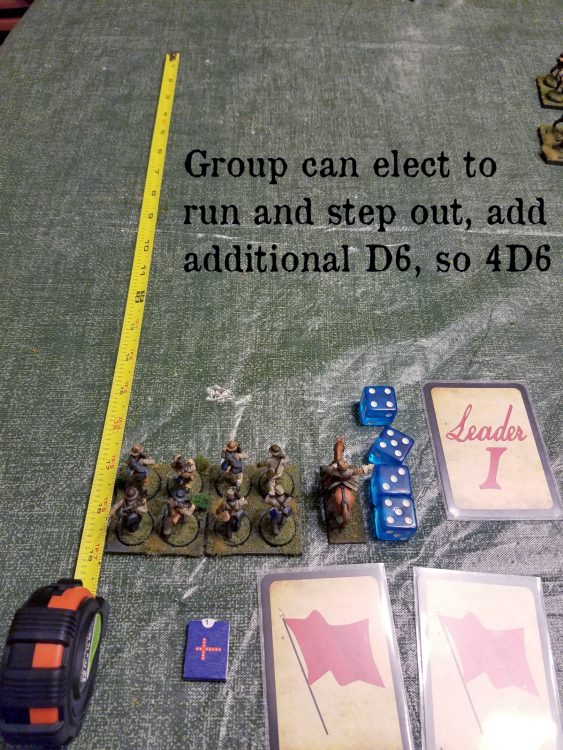 Troops can also elect to run. This is an additional die of movement, so if you’re lucky, you can get up to 4D6. This will put one point of shock on the troops, and if they’re in a formation (more than one group together) the formation will break up. Shock is important – it will make it harder for that unit to do anything. They’ll move slower, retreat further, and shoot poorer. 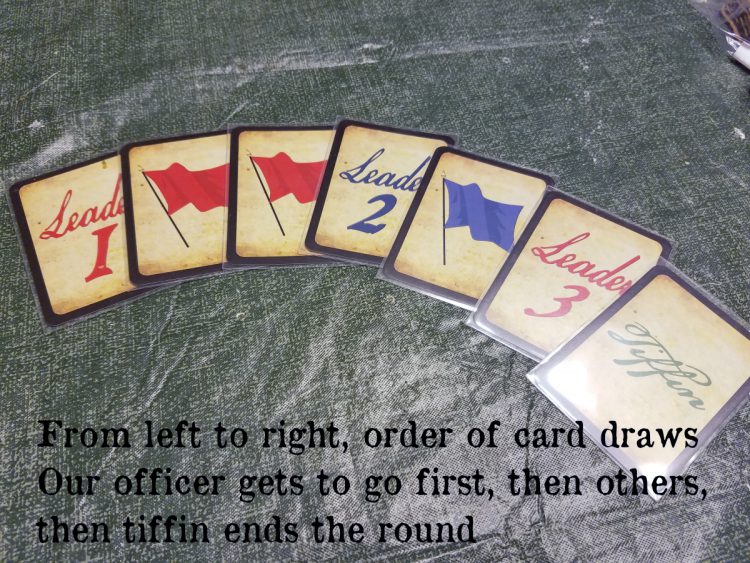 Here you can see a demonstration of how cards are drawn. Our leader (one) went first, then we got some command cards that we can use to enhance our troops, then the leader two from our opposition went, then our leader three, and then the Tiffin, which ends the round.
It is possible that some leaders won’t activate every round – and I’ll talk more on that later. It is also possible then that some units won’t get to activate. Such is the reality of war – some units falter or don’t receive orders in time. However, if we have command cards there are things we can do: 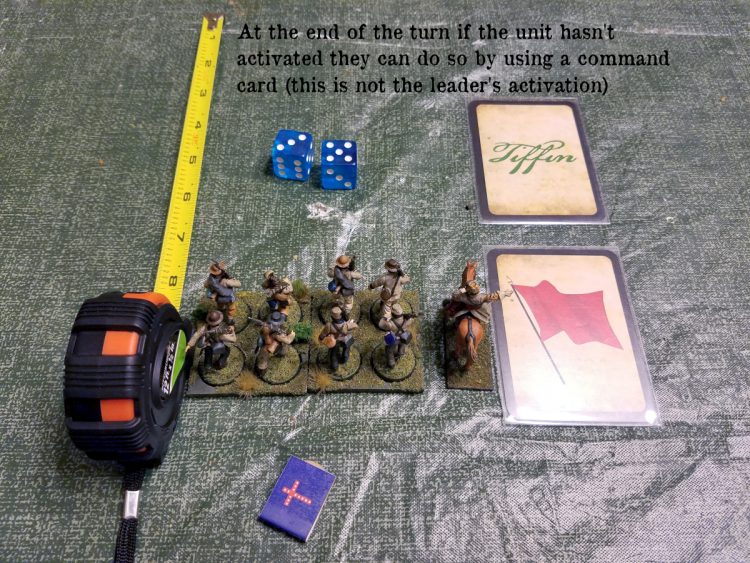 If a unit (unit is defined as one group or a formation of groups) hasn’t activated at the end of a turn they can use a command card to do so, gaining two actions. Sometimes this happens because their leader hasn’t activated, sometimes it happens because the leader rallied shock off of them during his activation instead of having them move or shoot. 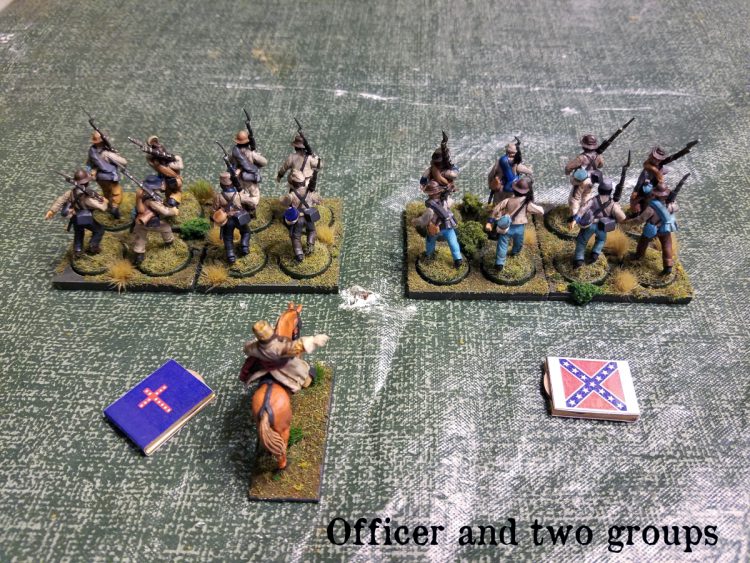 More often than not, especially with regular infantry, your officer will have two or more groups under his control. Here you can see two groups that aren’t formed up with each other. 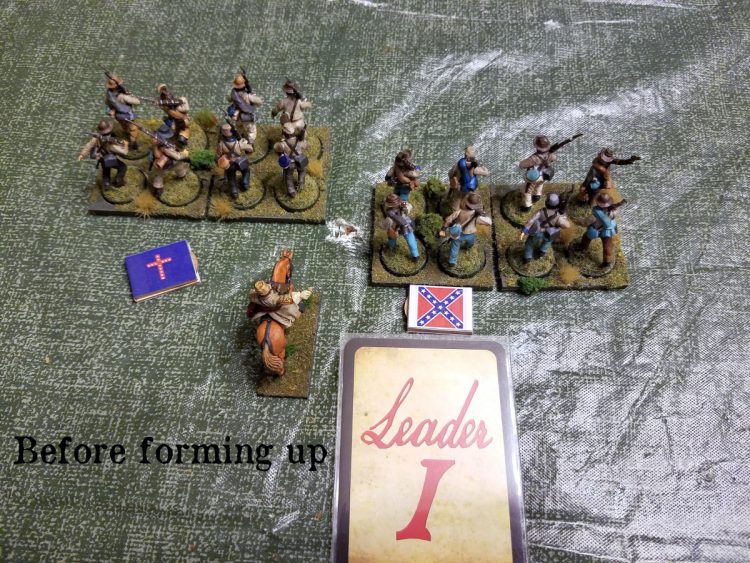 Lets pretend they’ve just passed through some woods and they’re exiting to the other side. They haven’t entered the fight yet but are ready to go in. The officer wants them to form up in a battle line formation, shoulder to shoulder. 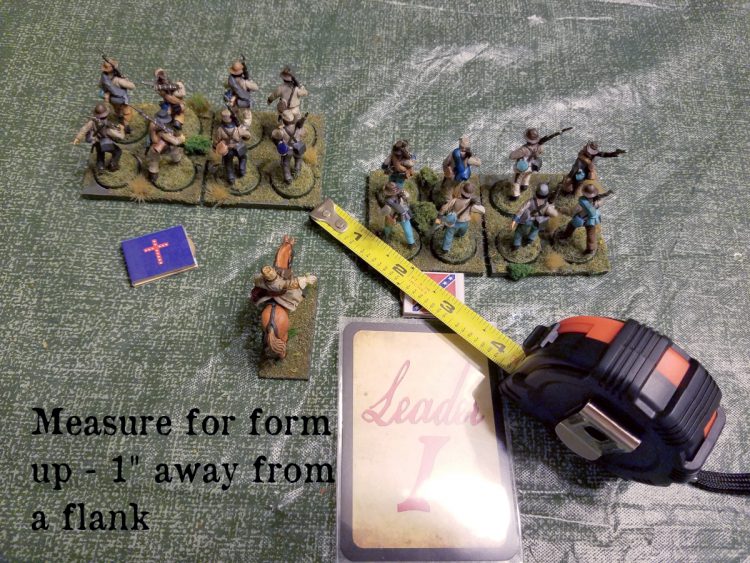 So we measure to see how far they are away from each other’s flanks. 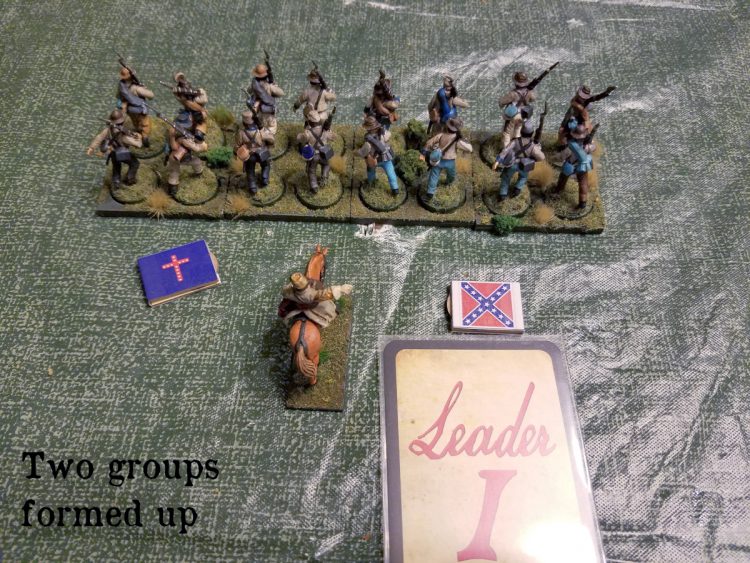 If they’re within an inch of the flank of each group, they can form up for free and continue their activation. It is basically a little shuffle to join the two groups. 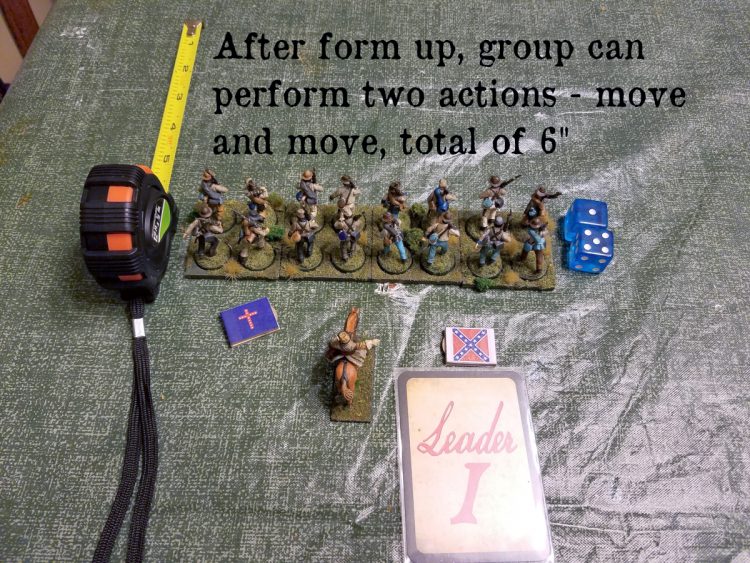 As said above, they can form up for free and then do their two activations as a formation. In this case the officer commands them to use their two actions to move forward twice, rolling 2D6. This formation move includes both groups. Again, if they choose to run, they’ll lose formation (and gain shock).
If they are further than the 1″, up to 4″ away, then they can form up, but it takes one of the formations’ actions to do so. In that case they could move with 1D6. 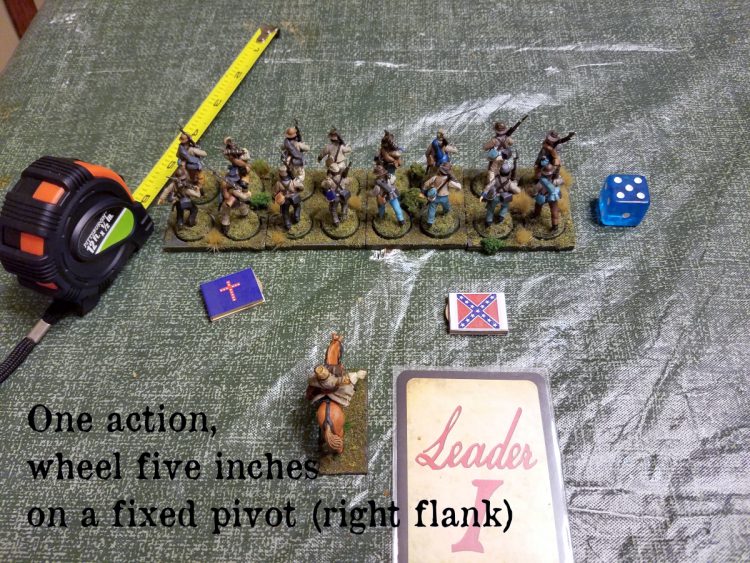 Lets say our formation is being hit on their flank and needs to change fronts. We want them to wheel and move forward a bit to face that threat. We can use one action to wheel on a pivot – so they choose the rightmost stand to pivot on, then roll 1D6 and move the other flank that far in a wheel. 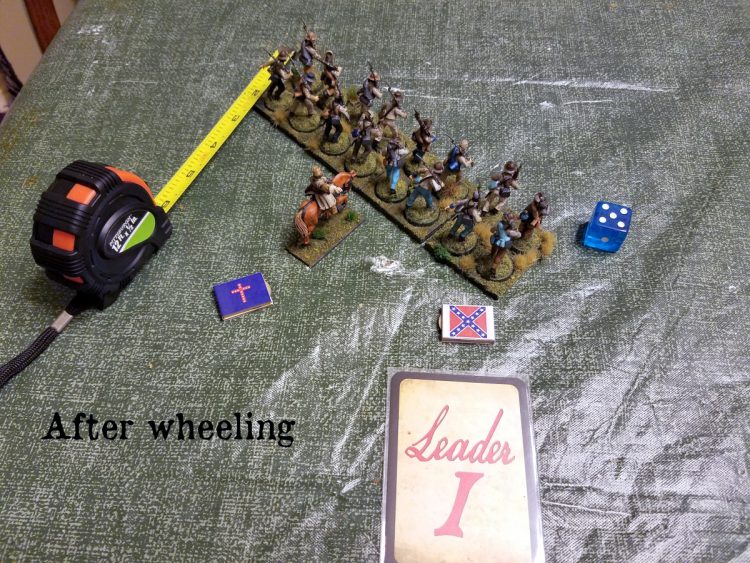 After they wheel, they’re setup to continue movement forward. 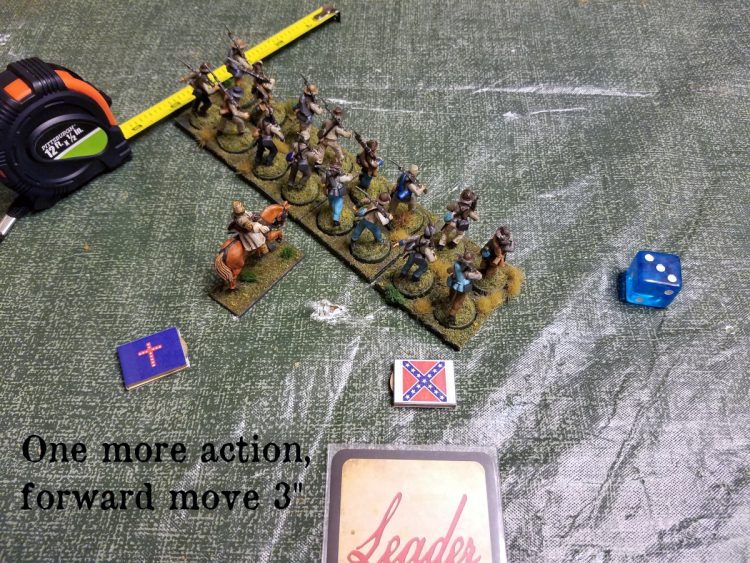 They can move forward three inches and get closer to the enemy. 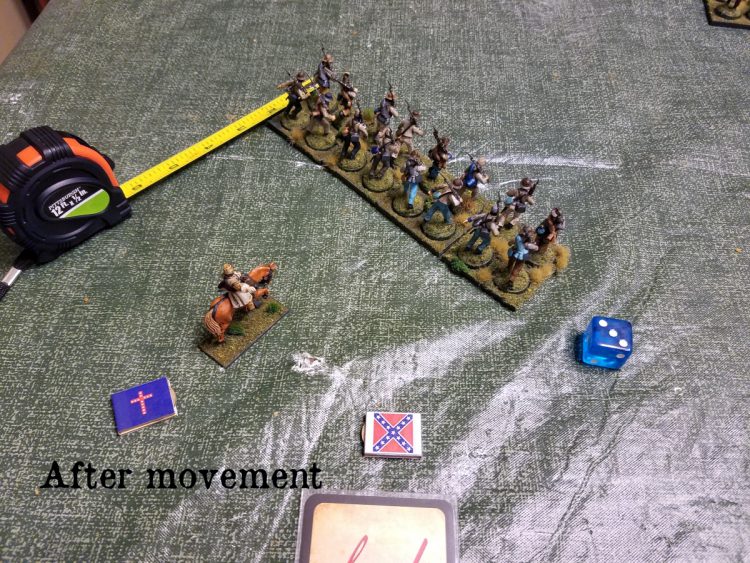 The formation has moved from facing forward to facing to the flank and moving forward a bit. The enemy unit will be challenged instead of firing into a unit unopposed. 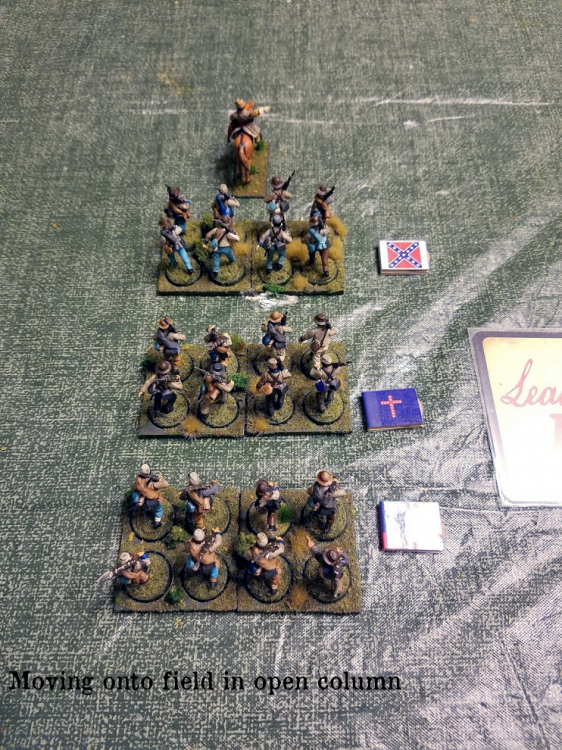 Lets say we now have three groups together in a formation, and they’re in an open march column as they haven’t yet encountered the enemy. However they’ve spotted skirmishers in their front and need to shake out into a battle line. 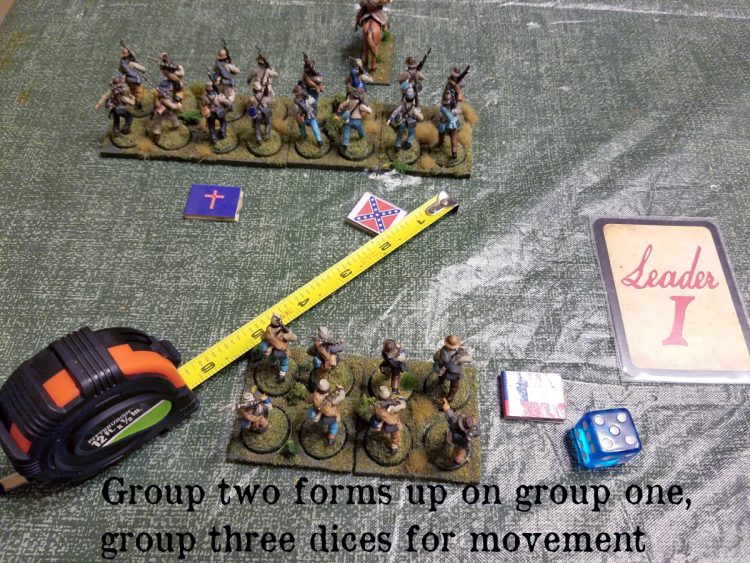 In this case, group two forms up automatically since they’re in a march column. Group three will have to dice for movement and rolls a five. 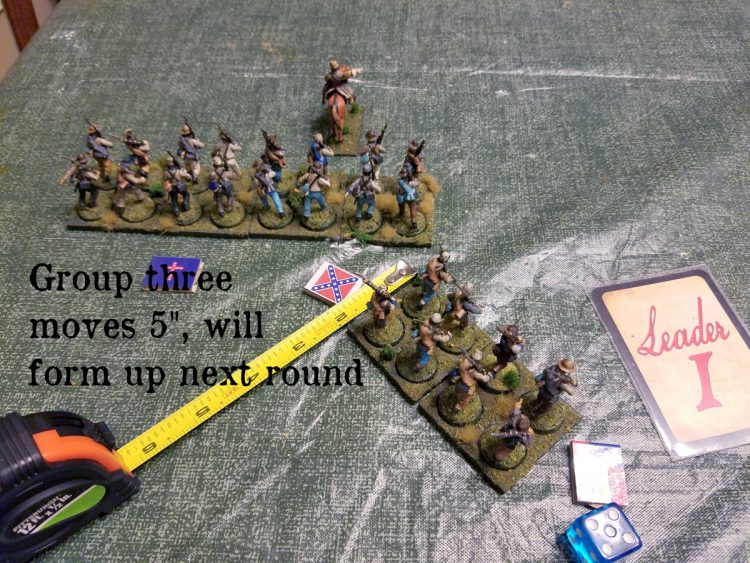 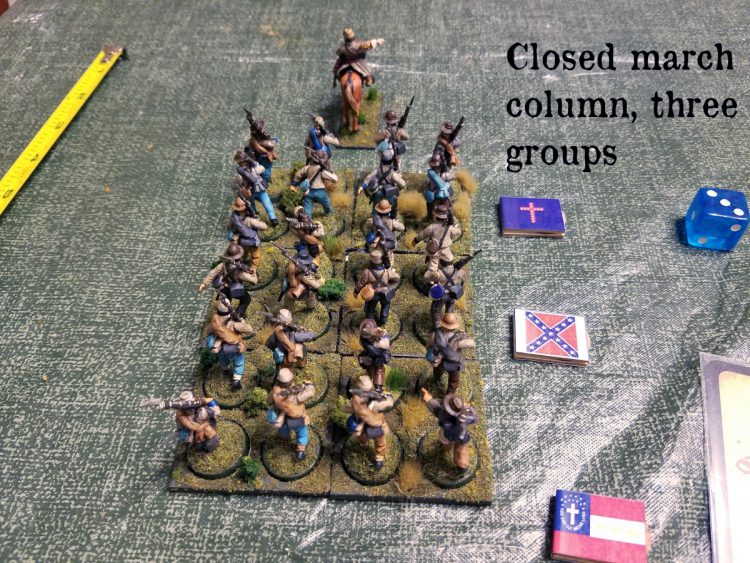 If the formation had been in a close column, they would have formed up all three groups without having to dice anything. 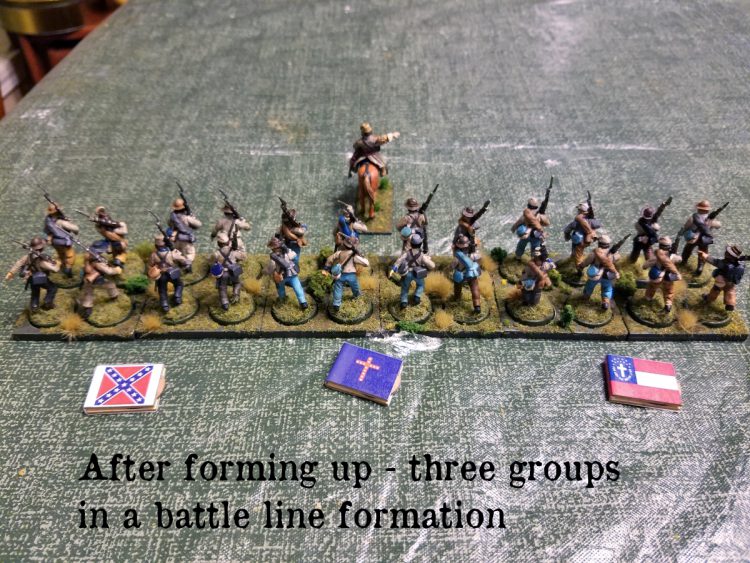 The Friction of War

When I first read the Sharp Practice rules, I was a little taken aback at the random dice roll for movement. I’ll admit, I’m used to systems where everyone moves the same amount all the time. Not only that, but units always get to activate in a turn.
I had heard the TFL commercials on Meeples and Miniatures and it seemed that maybe they were just making movement random to be different. As I thought about it more, though, I realized why they use this mechanic in their games. They have always been up front about emphasizing command and control and leadership in their games, as well as an idea called friction.
Carl von Clausewitz, a Prussian general and one of the most famous military tacticians of the twentieth century, talked about friction. This is what some call the fog of war, or basic human nature when it comes to military action. Quote from Fog and Friction blog:

Very much at odds with Jomini, Clausewitz warns against the notion of reducing military action to simple formulae. “In short, absolute, so-called mathematical, factors never find a firm basis in military calculations.” War is complex, and any theory which sought to exclude variables introduced by such “friction” as human genius, courage, incompetence, and other unpredictable events is useless.

Regardless of the acceptance of any theory, the frictions brought to bear on the execution of war in the real world will almost certainly result in something that looks very different from that theory. Yet the framework proposed by Clausewitz of the fundamental nature of war and the friction that inevitably makes conflict so difficult to predict and control continues to offer insight to students of strategy even today. This is the reason why more non-military historians recognize Clausewitz, and why he should be considered the Father of Modern Strategy.

What we can consider ‘theory’ in wargaming terms is the idea that in a perfect world with perfect terrain while not under continuous fire, a man can walk 6″ on a board. So Clausewitz is saying that if we do that, we’re not taking into account any ancillary variables.

The good General must know friction in order to overcome it and not expect a standard of achievement in his operation which this very friction makes impossible.

Variables could include a sergeant thinking he sees something so his men slow down, incoming fire, confusion of orders, etc. Our miniature soldiers in Sharp Practice (and other TFL games) don’t always do every single thing we want them to. I would consider this part of the simulation – accounts from the time period tell us there was a ton of confusion among the ranks. Especially with the ACW, which was fought by draftees and regular civilians.

The other random mechanic is the round end. In each deck of cards or bag of chips we have the Tiffin. This ends the round and starts a new one. Anyone who hasn’t activated yet that turn can do so with a command card, otherwise they are stuck milling around. 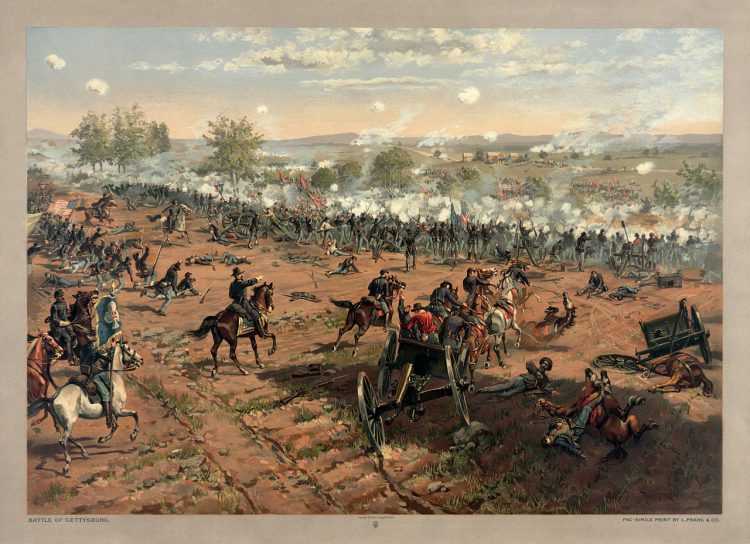 You get an idea how units would stall or get confusing orders when you look at original art from the time or read diaries – there were so many men involved, so much terrain, noise, and damage that it made it very hard to keep troops moving. This aspect of friction can seem unfair, especially if your opponent gets to activate first, or perhaps they activate multiple units then the tiffin comes – but there is a balancing factor in the command cards. You can activate one unit per command card if they haven’t yet activated. This doesn’t help if you don’t have any command cards, but such is the nature of war.

Thanks for reading – and if I made any mistakes, or you have further thoughts on the topic, please post below! We’ll continue next week with Firing in Sharp Practice. Or email us at contact@goonhammer.com.