AdeptiCon week is here. I’m driving down Wednesday from the Mitten state to partake in the best week of gaming and I might not have to do any hotel painting. I might not even have to spray Dullcote on the hotel balcony. I had shown some previous progress here and I’m pretty much finished now except for some roads I’m making using vinyl tiles. 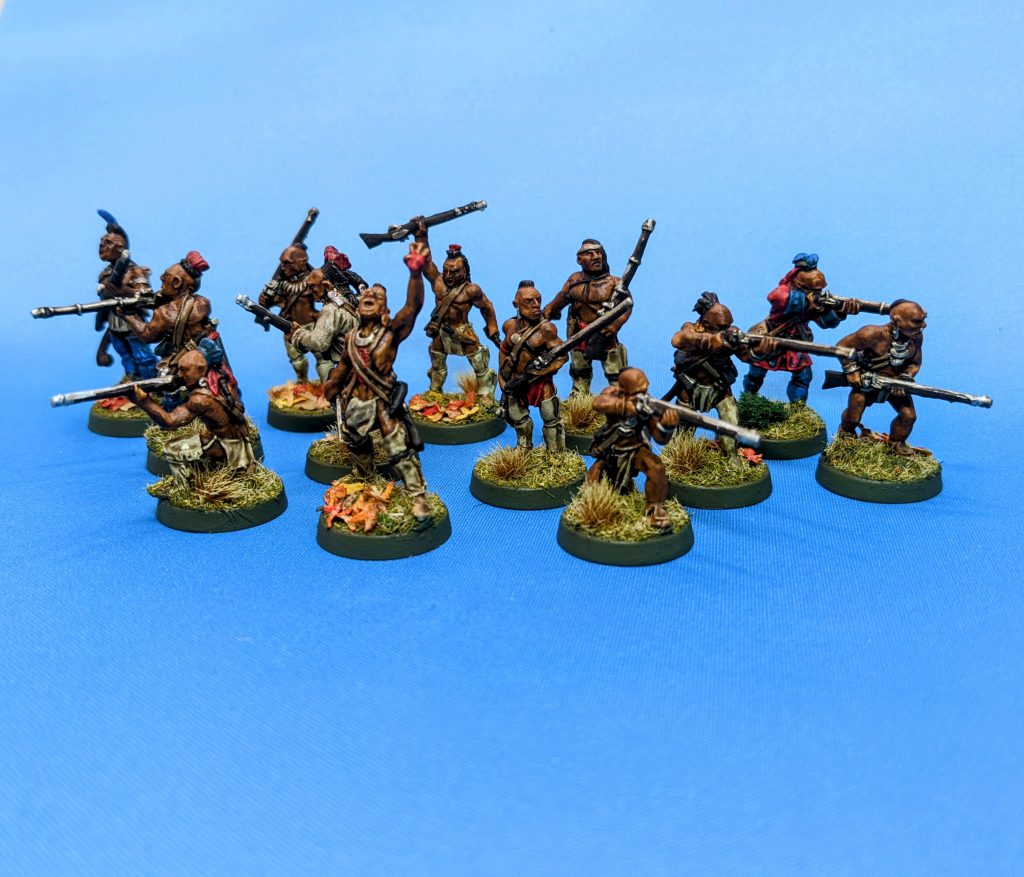 I already have 12 American Indians painted but decided to paint another group for my French force. These are a mix of Conquest and Galloping Major minis, I believe. The leaves are from Secret Weapon Minis, still have a ton of bags of them. I plan to use the regular tribe rules, 12 dudes, but they’ll get +1 cover in forest, as they should. 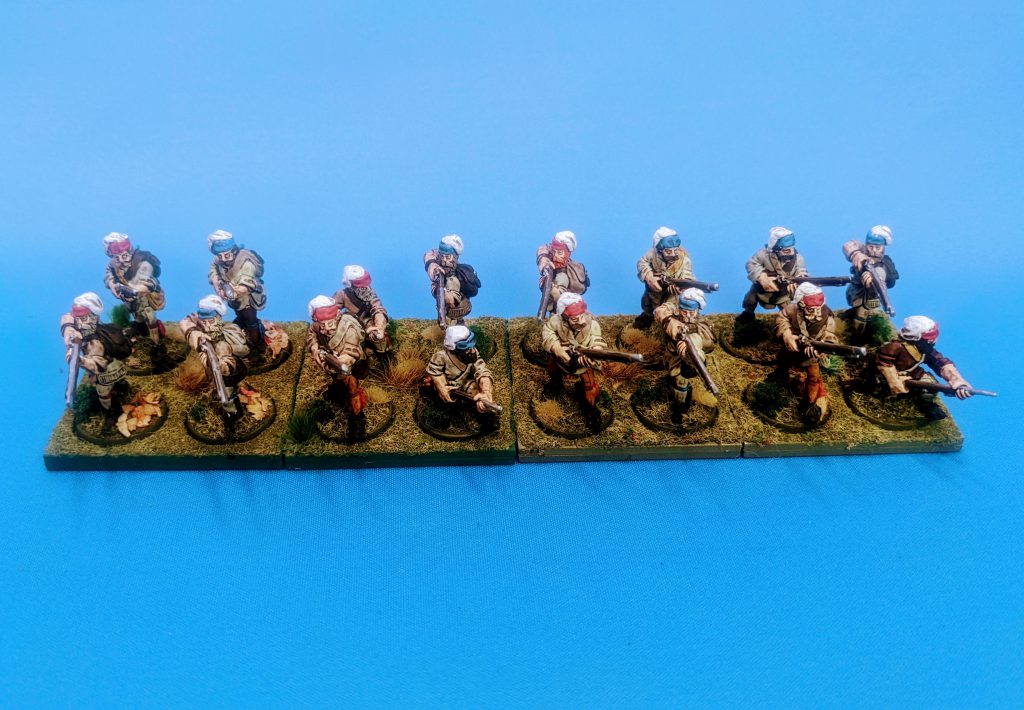 I figured out that these are AW Miniatures Compagnie Franches de la Marine. They’re line infantry regulars for my French force. In the Ohio Valley where I’ve set the scenario the French didn’t really wear any regular uniforms – the white coats with tricorns, etc. I’ve also painted up a ton of extra sabot movement bases. 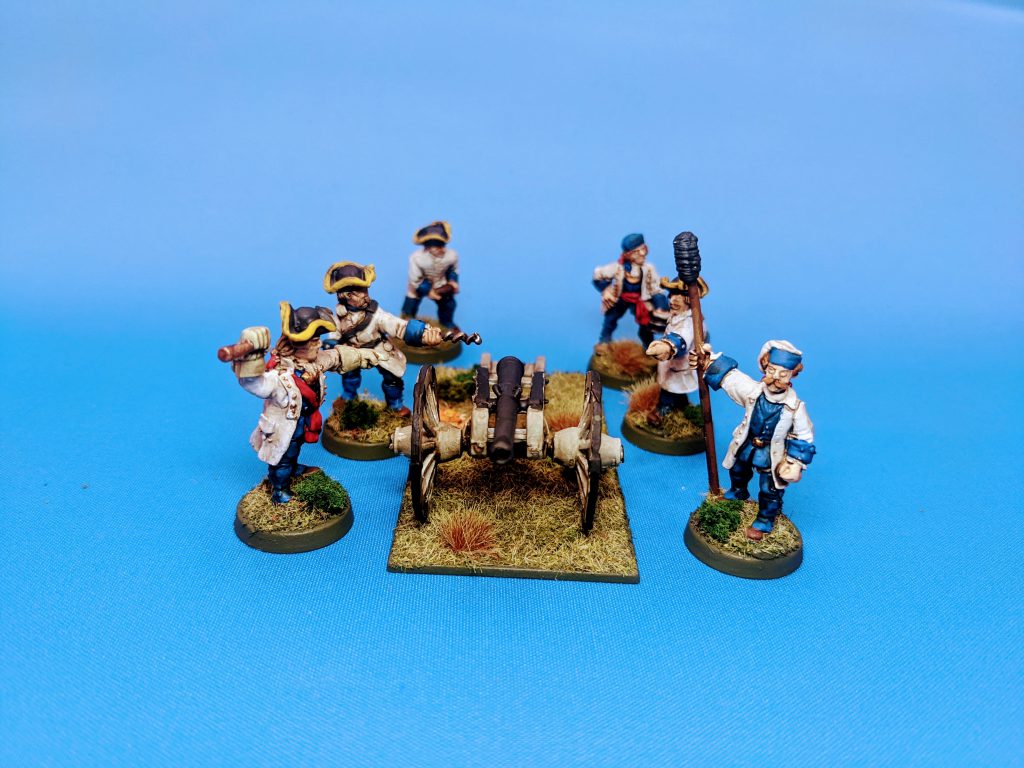 This is a light artillery piece from AW Miniatures with all the crew and a leader. There’s a caisson around here somewhere as well I just need to paint it. That’ll definitely help as pushing the thing in the American frontier will take forever. 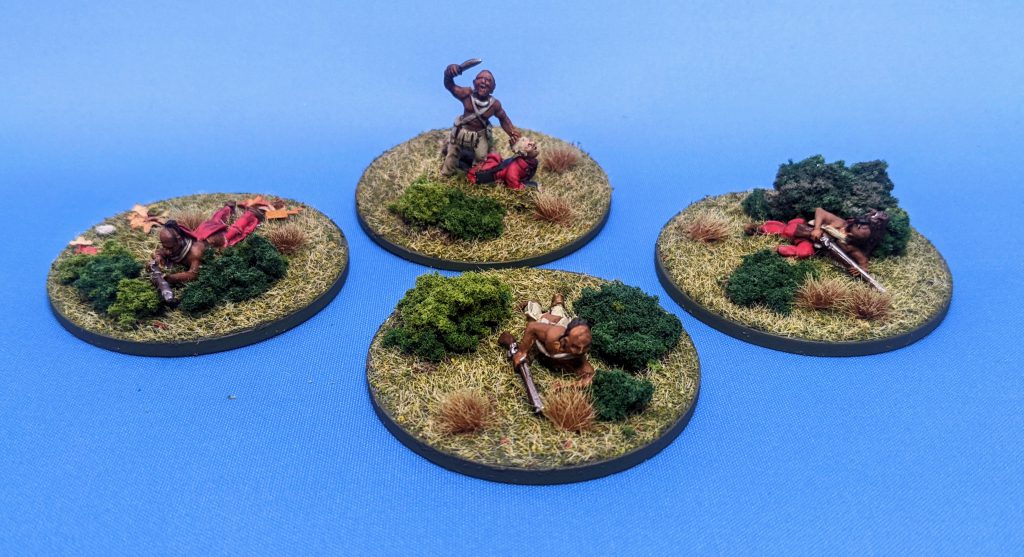 I made these moveable deployment points mostly for American Indian troops who can use them. They represent a scout who has been sent ahead to find a good position for the troops to attack from. Mostly Sash and Saber FIW Indians. 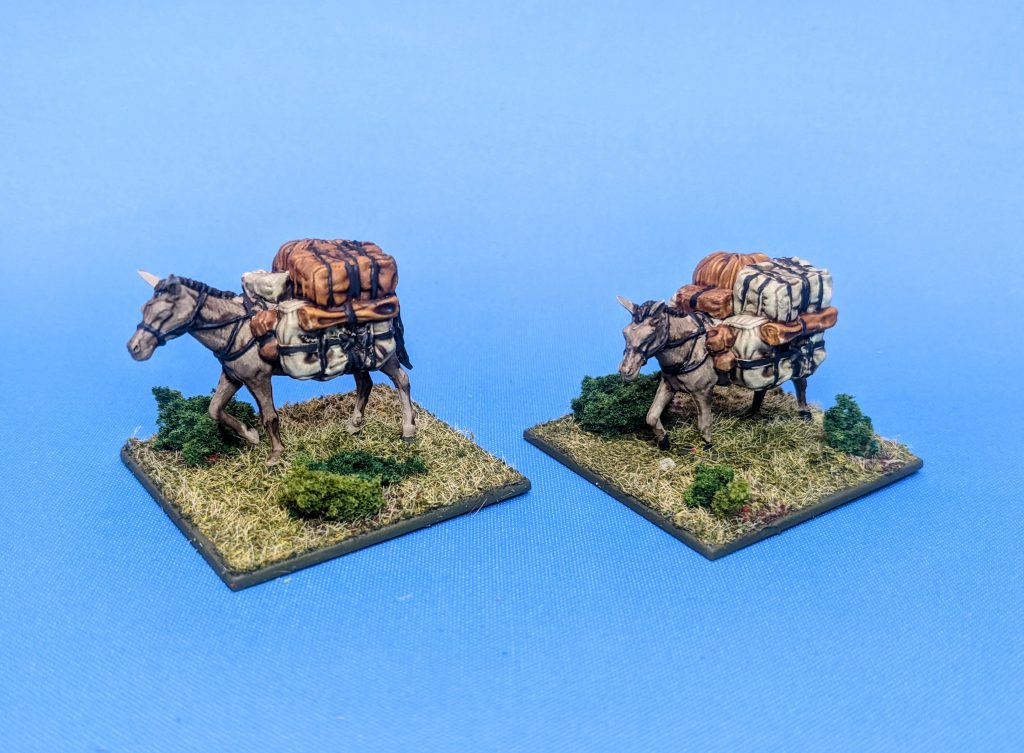 Mule trains are incredibly important in Sharp Practice. It is possible that your guys will randomly run out of ammunition or water, so you need to be able to replenish them. A mule train can do that for you. These are Reaper minis, not exactly trains of mules but good to represent one. 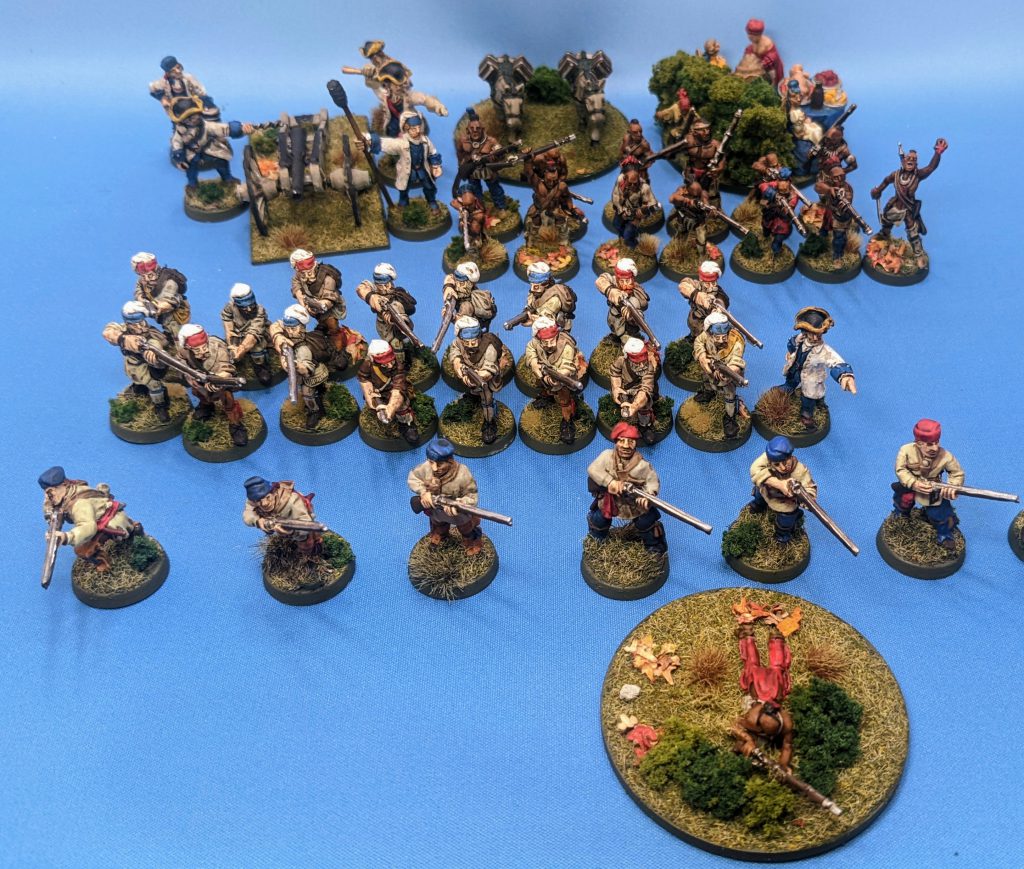 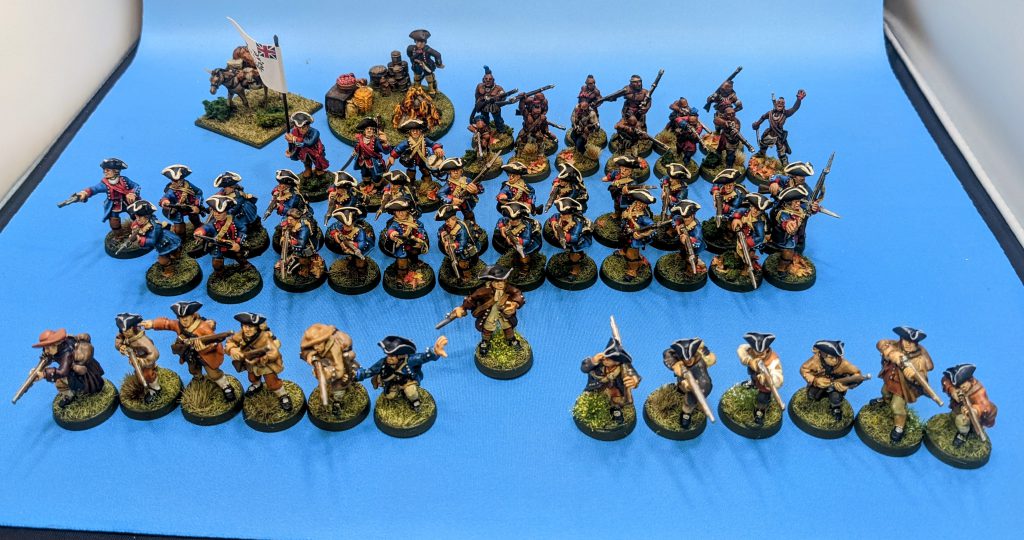 Here’s my entire FIW English force made up mostly of provincial troops and settlers. 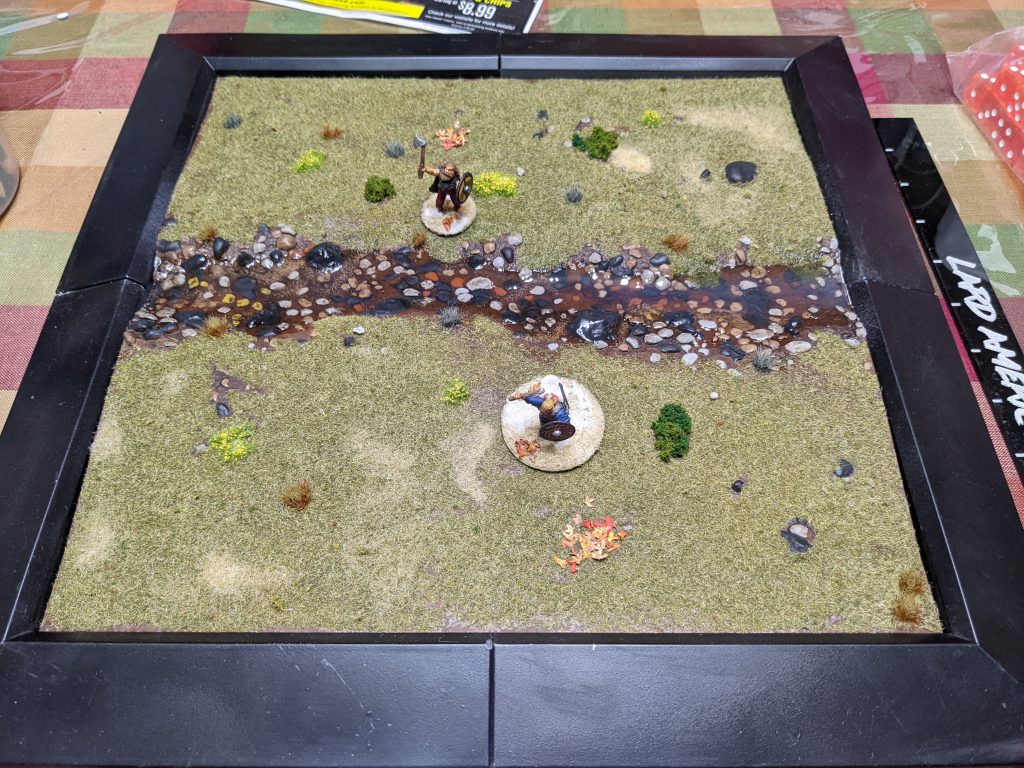 I’ve had a few Rolling Fields tiles from Secret Weapon kicking about for a while so I decided to paint and flock one up as a display board for my SAGA and Sharp Practice troops. I love the way it came out. Next time I’ll do a better job of damming up the sides so the realistic water solution doesn’t flow out onto my table =) 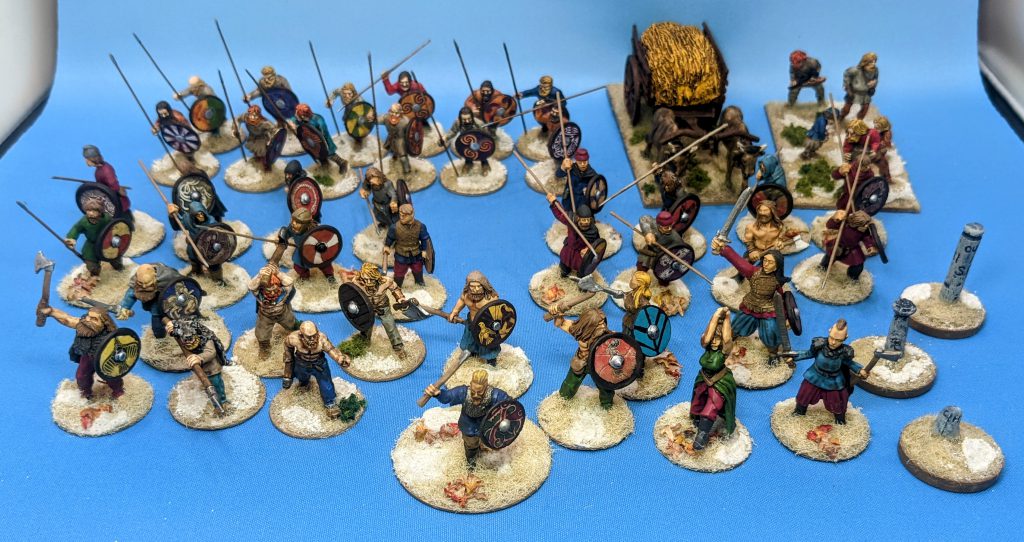 Here’s my entire 6 point Viking force for SAGA – Ragnar leads a three hearthguard units, two warrior units, and one levy unit with spears. I also painted up the baggage but realized after that I actually needed 25mm bases instead for objectives. I found some stones in a box I had labeled ‘Scatter’ and used those. 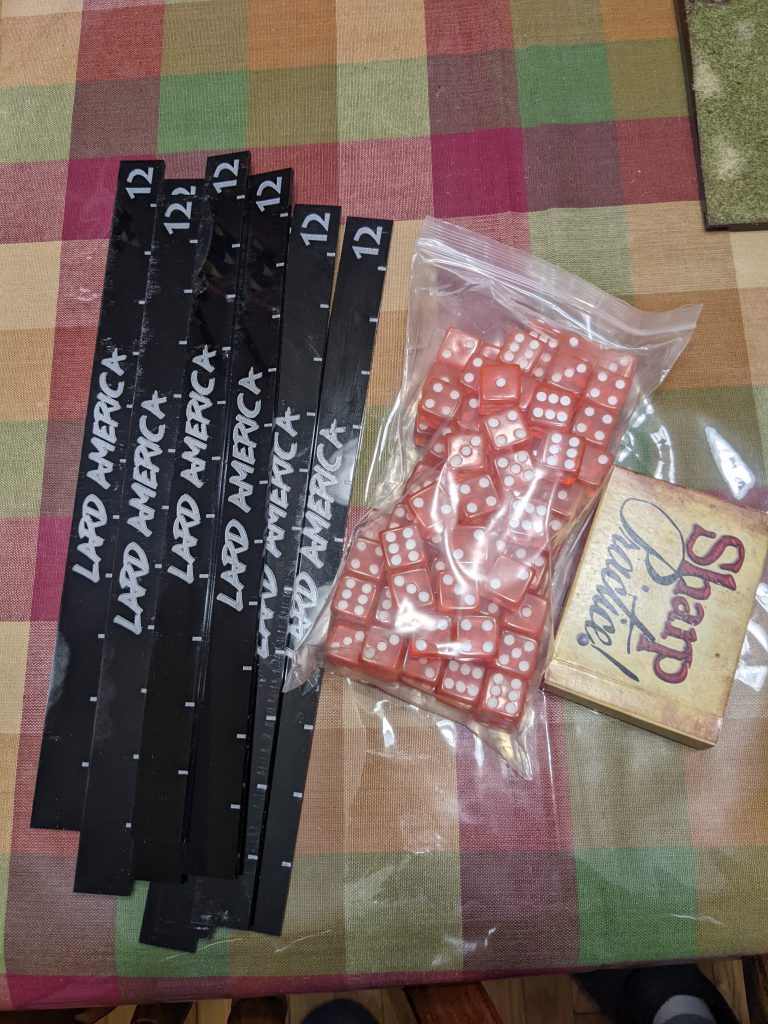 Every Lardie who runs an event at AdeptiCon will receive a sweet Lard America ruler and we’ll be using orange dice at our events to raise awareness for childhood leukemia.

I took some shots of our test games we played getting ready for AdeptiCon – you can see them in this gallery. Thanks for checking out my work!