In this week’s Hammer of Math, Kevin is going back to the Iron Hands well to take a look at one of the most powerful combinations available in 40K. This particular topic comes from fellow author Scott Horras “Heresy” who was one of the many Goonhammer folks in attendance at LVO. Readers may recall our infamous Iron Hands Vehicles article that discussed exactly how crazy things can get when facing this particular Chapter of organically-challenged warrior monks. Turns out even after the FAQ and several updates things haven’t really gotten any better, particularly when you take something like a Leviathan Dreadnought, apply a few Stratagems, and get a band of 10 Intercessors to hang around and take wounds for it.

That Iron Hands are overpoweringly strong has been well established. For reasons that continue to escape us here at Goonhammer, Games Workshop decided to take one of the most powerful rule sets in the game and supplement it with an army that gets universal benefits to lethality, mobility, and survivability. It also contains a series of Stratagems and Warlord traits which are immensely effective, and as a result we consistently see Iron Hands place high in competitive play. Goonhammer GOAT and all around swell guy Richard Siegler even went so far as to change out from his beloved T’au in order to ride the Iron Hand train to victory at LVO.

A perfect example (and one that was utilized in several top lists) is the application of several Stratagems to a Relic Leviathan Dreadnought. By itself this unit is no slouch, with 14 wounds at a Toughness characteristic of 8 protected by a 2+ armour save and a 4+ invulnerable save. Slap on a coat of black paint and the unit also gets a 6+ Feel No Pain roll that immediately increases the number of effective wounds by 20% like all other Iron Hands units. Now where things get particularly silly is when you apply the Iron Hands Stratagems. First, spend 1 Command Point to use March of the Ancients to make the DREADNOUGHT gain the CHARACTER keyword. Next, make this new CHARACTER your Warlord so that you can apply the All Flesh Is Weakness trait to improve the Feel No Pain roll to a 5+, which increases the effective wounds by 50% instead of merely 20%. In combat the player will spend 1 CP to apply Duty Eternal and halve all incoming damage. While hard to kill by itself, where things really get crazy is when you follow up with a supporting cast. First, a CHARACTER (who is not a VEHICLE) nearby can carry The Ironstone to reduce the damage inflicted by attacks made to the Leviathan by 1 (note that per the FAQ only one VEHICLE is affected by The Ironstone per turn). Second, a squad of 10 Intercessors provides ablative wounds through the combination of Cogitated Martyrdom which allows Iron Hands CHARACTERS to redirect wounds to the unit on a 2+, and Reject the Flesh, Embrace the Machine which also costs 1 CP and increases the Intercessor’s Feel No Pain roll to a 5+. You now have a bank of 30 effective wounds (20 wounds with a second 5+ save) for your T8 unit to rely on.

So let’s go over exactly what happens in this sequence:

Everything from step 4 onward is unique to Iron Hands and represents a massive increase in resiliency of what is already a fairly tough target. A major swath of incoming damage is nullified along the way, as the improved Feel No Pain potentially affects every wound dealt, and the damage that does get through will end up on a 20 wound bank of Intercessors 83% of the time (where it can be nullified again). For a typical anti-tank weapon such as a lascannon fired with a BS of 3+ the chance of actually wounding the Leviathan is 2.5%. Everything else is either ignored or goes to the Intercessors.

So How Bad Is It?

The easiest way to find out is to simulate a few representative attacks. I put together four scenarios based on a few things that might be encountered in play. The Repulsor Executioner is stationary and firing its full complement of Heavy Laser Destroyer, Onslaught Gatling Cannon, and Heavy Bolter shots while under the auras of a Captain and Lieutenant. The Cadian Leman Russ is stationary and under the Pound Them to Dust! orders to re-roll low values. The Exocrine is under Hive Fleet Kronos to re-roll 1s and has both the Symbiostorm power to add more hits and the Pathogenic Slime Stratagem to increase damage. Finally the Bloodthirster of Insensate Rage is just a Bloodthirster of Insensate Rage. In the scenario below we assume the Leviathan Dreadnought is protected by an Intercessor squad of 10 Primaris Marines that have a 5+ Feel No Pain, that they are limited to taking 20 wounds, and that in between attacks no wounds are regenerated. 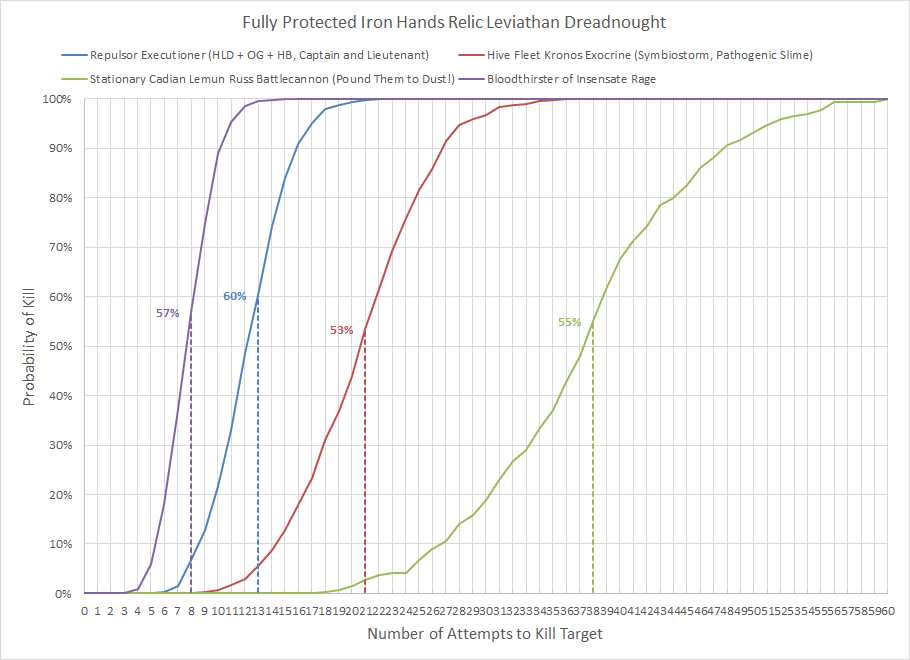 Note: Cogitated Martyrdom only works in the Shooting phase so the Bloodthirster of Insensate Rage would actually quickly annihilate the Leviathan in a fit of, well, rage. My mistake.

To put it bluntly there isn’t a single approach that has a reasonable shot of removing the threat during the length of a regular game of Warhammer 40K. When facing an Iron Hands Leviathan you’re better off eliminating the support as best you can. Snipe the Ironstone, murder the Intercessor support squads, focus on mitigating the threat instead of focusing fire on the Dreadnought itself. Maybe we just need to bring more firepower? Maybe the most powerful units in the game? Let’s throw a Titan at it. 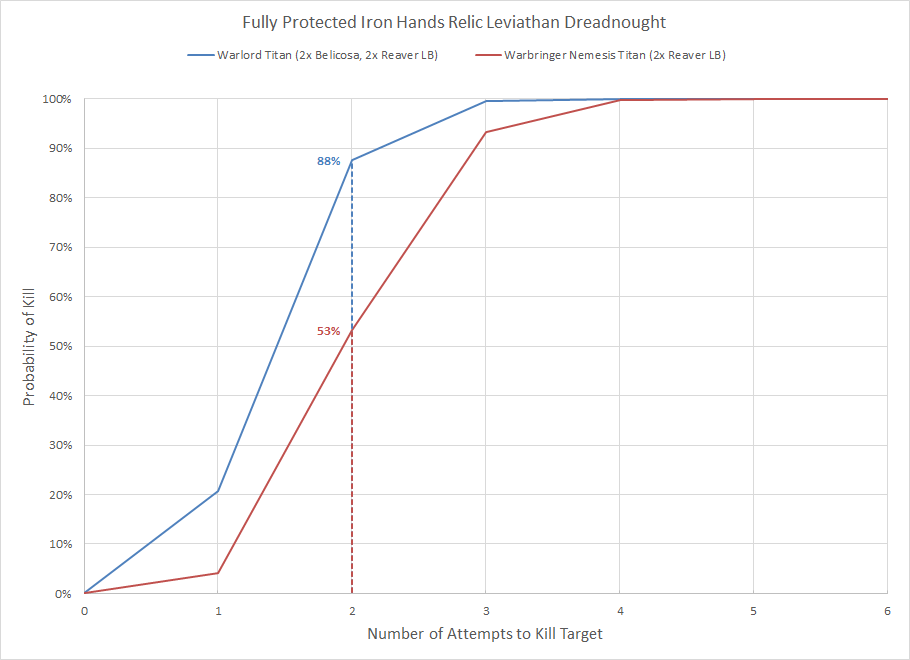 Welp. Note that these simulations do not incorporate adding wounds back to the Intercessors or Leviathan, which almost certainly would happen in a real game. In other words these estimates are optimistic, and in reality it will take even longer.

I don’t have much to offer you. This particular combination, when taken head on, is so arduous to penetrate that you might as well not bother. Against a good opponent who can screen their shielding squad and support characters this is excruciatingly difficult to deal with. There are a myriad of ways that Games Workshop could address the problem, such as removing the DREADNOUGHT keyword from the Leviathan, changing how wounds are transferred and ignored with Cogitated Martyrdom, or possibly taking the entire Iron Hands Supplement and burning it in a fire. None of these things are likely to occur in the near future.