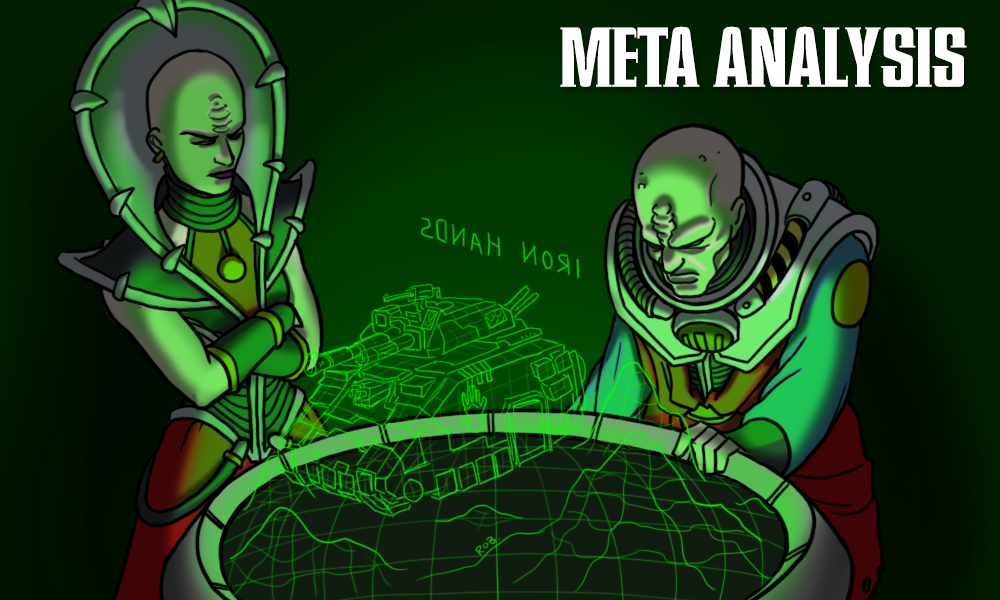 Last week, we took a deep look at the meta prior to LVO, analyzing the faction breakdowns so far, looking at key lists, and making predictions about how the event would shake out. Now that the games have been played and the dust has settled, it’s time to see where things sit prior to the incorporation of the rules from the new Ritual of the Damned supplement.

First off, if you missed our prior analyses, you can find them here:

Let’s start with the results. After all the no-shows were taken out and the final results were tallied, here’s the faction breakdown: 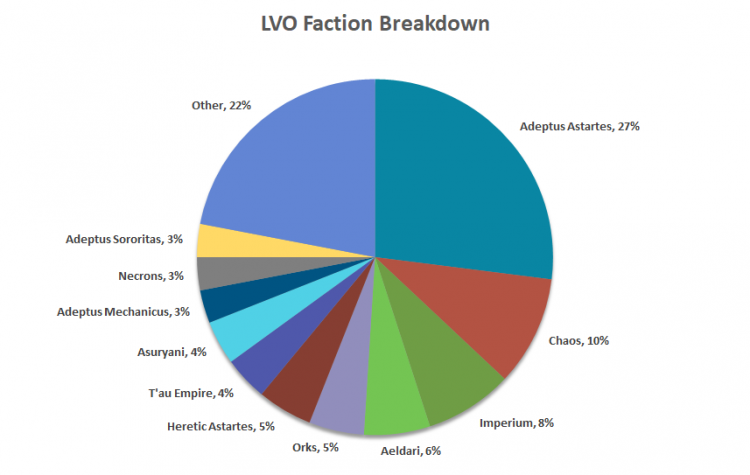 As before, Space Marines dominated the format as a whole, making up more than one in four armies. Coupled with what we’ll see was a tournament-high 61% win rate, this means that your chances of playing a Space Marines player in the tournament each round increased significantly as you won more games. A player who won their first three games had roughly an 80% chance of playing Marines in round 4, and a given player had only a 6% chance to make it through round 4 without playing any Marines after starting 3-0.

By Subfaction, Iron Hands were the most dominant once you take out the Red Scorpions and Raptors, which are both run as Raven Guard Successors. 63 players played Iron Hands, with the average Iron Hands player walking away with 3.5 wins. Raven Guard and Adeptus Astartes (read as IH/RG successors) were close behind. Imperial Fists fared a bit worse, making up the 3rd largest cohort of Marine lists and averaging 3.3 wins. After that it was a significant (0.5 wins) drop-off to Salamanders.

Based on this, we can develop official, IRON-CLAD MARINE TIERS. Note that these do not take into account new Dark Angels rules from Ritual of the Damned.

Of these, Blood Angels are the most surprising, owing to their just having received a powerful new codex. Though given that some Blood Angels lists fell within the “Adeptus Astartes” category thanks to being a mix of multiple chapters, it’s not quite as dire. This does suggest that monofaction Blood Angels may struggle, though.

By faction overall, Marines posted the highest win percentage at 61%, matched only by Forces of the Hive Mind, who had a much smaller sample but still performed admirably across their 52 games. 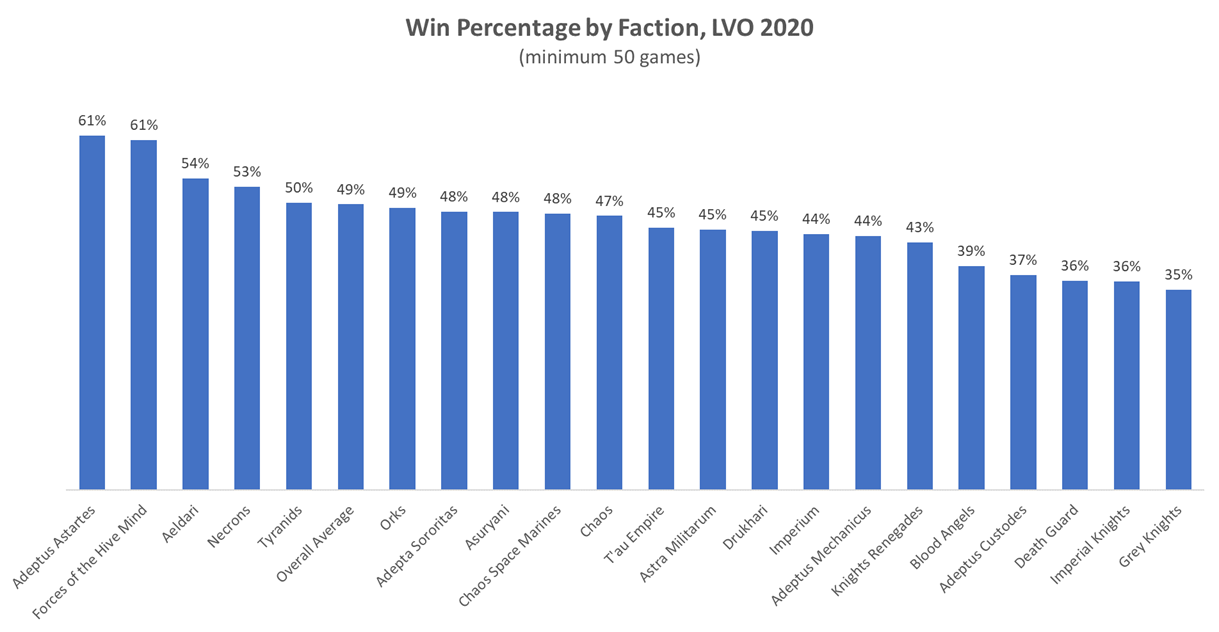 This isn’t far off of what we’ve seen in our recent analyses and of course, this led to a disproportionate number of Marine armies in the top lists. If we refine our sample to just the lists that went 5-1 or better through the event’s first two days, we can see this impact immediately, where Adeptus Astartes armies make up a whopping 46 percent of the 5+ win factions. And true to form, they’d eventually account for five of the top 8 lists on the final day. 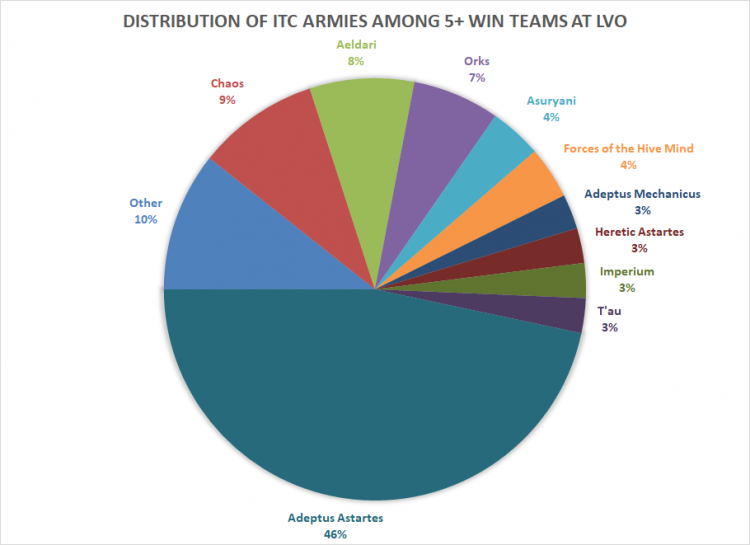 Breaking this down further, our results basically line up with our Tier rankings above, with Iron Hands and their successors showing the strongest results, followed by Raven Guard Successors and then Imperial Fists. Always good to confirm your priors, I guess. 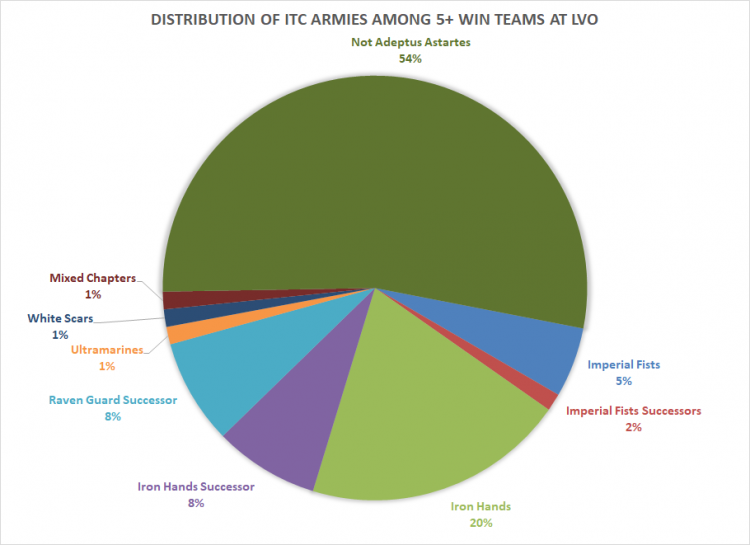 One more useful thing we can look at is how factions scored, which can help us understand the differences between faction records (Note: We currently don’t have the points allowed, but we have points scored in wins vs. losses to look at). Along with their winning records, Iron Hands armies also excel at scoring points broadly, something that we saw when we did our initial meta analysis for them back in November. Of note here are the Forces of the Hive Mind, who score very well, and tend to do so consistently as we’ll see when we look at win/loss spreads.

We can also look at the difference between a faction’s score when it wins versus when it loses to identify if certain factions win big or lose big, or if they’re able to consistently score the same amount of points each time. A faction that has a large spread potentially has a better chance of pulling an upset, but if its average score is low, then it’s unlikely to perform well enough across several games to actually squeeze out a win in a 5+ round event.

Using list data from the 5+ win lists, we can get a strong picture of the units used and their frequencies. We’ve mapped this in the table below, with both the raw number of units in the 5+ win armies, and also the number of armies with each unit, so you can get a picture of both how often you’d see a unit, and the sheer number that you’ll run into.

While Intercessors as troops are now the most common unit in the game, Thunderfire Cannons are the clear #2 when we’re looking at successful armies. 37% of 5+ win lists had at least one, and the total count was 55, meaning that the average list had just under 2. Likewise an average of 2 Scout Squads showed up per list to help fill out detachments.

Finally, we can also look at the units used in the lists that notched 5+ wins to get an idea of their makeup. We’ve already covered the winning list (the “Brohammer” Iron Hands list) in more detail in our interview with Richard Siegler yesterday, but you can find it again here:

This list has a number of particularly nasty tricks. It relies on a series of untargetable double-lascannon Chaplain Venerable Dreadnoughts, who are able to move up the table shooting with impunity. They’re supported by Eliminators who can remove key characters and potentially neuter Possessed Bombs before they can arrive, taking out the Apostles and Masters of Possession buffing them, and a large number of Intercessors, plus a Relic Leviathan Dreadnought.

The Relic Leviathan is particularly nasty here. By making the Relic Leviathan the Warlord, it’s able to gain a Warlord Trait at the start of the game after it becomes a character with the March of the Machines Stratagem (this is thanks to the Iron Hands FAQ). Something that isn’t obvious from the list is that it uses the stratagem to pass off wounds onto the Intercessors or Feirros, and the Leviathan dread already has the Iron Hands’ ability to ignore Wounds on a 5+, so it only suffers damage after failing a 2+/4++/5+++ save structure, after which it can pass damage off to the infantry around it thanks to the Cogitated Martyrdom Stratagem, who also have the ability to ignore wounds on a 5+. Combine this with the Ironstone Relic and the Duty Eternal Stratagem to halve incoming damage and you’ve got something that’s functionally unkillable. In practice, this ends up meaning that the Leviathan is passing wounds to Feirros or the infantry and then using the Apothecary to heal the wounds while Feirros himself can repair any damage the Leviathan takes.

If you’re familiar with T’au drones and Saviour Protocols, it’s not dissimilar, except you can heal the drones.

Also in the top 4 and not Marines was Sean Nayden’s Aeldari List:

Sean’s list packs an insane amount of mobility and essentially takes the best of what’s available to Harlequins with lots of Haywire Skyweavers and adds that to a Craftworlds Battalion filled with Shining Spears to clean things up with charges. The list also takes advantage of the Yncarne’s massive points drop, which finally made it something to consider playing, along with a pair of Spiritseers for cheap smite support.

We may update this space later with thoughts from One_Wing. Stay tuned if that happens.

One_Wing: Sean has always been a big user of the Yncarne, and this list does what his style of lists tend to do best – present the opponent with a completely different target profile than most armies pack, while threatening to brutally punish an opponent that slips up. The entire list is absurdly mobile, and the Spears present a huge threat out of Deep Strike that the opponent will need to deal with. The custom Craftworld basically goes all in on making them good at this, with a boost to their charges and a boost to their deadliness if they can line it up so that a model is holding an objective when they connect (often not hard).

All of this is screened and set up by the swarm of Skyweavers, and with Frozen Stars as their trait it’s clear they’re planning on getting straight up in the opponent’s business right from the start chopping stuff up. The Frozen Stars trait and stratagem combine to give a squad a much better chance of actually landing some real damage on Marine infantry of various flavours, and a good counter to other Biker armies. This applies pressure to allow the Spear units to wave in fully buffed as needed,

Finally, you have two deadly surprise units in the Yncarne and the Solitaire. The Solitaire I packed was one of my MVPs for the event, and with Cegorach’s Rose your opponents can really struggle to keep their characters alive. The Yncarne is just great – they’ll die hard if he ends up out of position, but this list has a lot going on that will make that hard to do. Of particular note, with Frozen Stars the smaller bike squad has a good chance of picking up a straggling Scout Squad, which can be helpful if the Yncarne needs an emergency eject.

This list is (obviously) great, and it’s nice to see some custom Craftworld traits other than Expert/Masterful/Concealment in use!

There was also an Ork list in the top 8, but it’s not particularly different from the Boyz- and Weirdboy-heavy lists that we’ve already seen in the meta.

Marines For the Time Being

That wraps up our nearly two-week look now at the 40k meta. Hopefully you’ve enjoyed the process and our analysis through this point. It’s hard to argue that the meta is currently in a great place, with marines – and Iron Hands in particular – dominating the environment. We’ll take another look in late February/early March as Adepticon approaches and we’ve had a chance to see what the impacts of Ritual of the Damned and maybe The Greater Good have been. Until then, if you have any questions or feedback, drop us a note in the comments below or shoot us an email at contact@goonhammer.com.