Now that LVO is in the books, we can take a look back at its Kill Team Tournament with fresh eyes and look at what the event and its results say about the Kill Team format, the meta, and the game as a whole. In today’s article, Robert “TheChirurgeon” Jones, Novembermike, and Shane Watts are going through the results and talking about the overall results and the specific Kill Teams that performed well.

Novembermike: Last weekend saw one of the largest Kill Team tournaments and the first major event to use ITC style Hold/Kill primaries, open secondaries and mission specific bonus objectives. I participated and talked to other people that participated, and the general feeling was very, very positive. The terrain was good, we had a lot of variety in players and the BCP issues didn’t hurt us as much with a tenth the players that the 40k event had.

Shane: I had a blast playing in the Sunday Pod/GT. I really enjoy the Hold/Kill primaries, so I was glad that they seemed to be a hit. The terrain worked well, I’ll dig more into that later.

TheChirurgeon: The Kill Team events at LVO saw a good mix of factions, with no one group making up more than 10% of the field. That’s great! There’s a lot of reason to believe that, even at a competitive level, there’s lots of room in Kill Team for the more “out there” factions, and a decent amount of balance between teams. I was particularly surprised to see multiple Chaos Daemon kill teams at the event showing up in results. In that “other” group are Heretic Astartes (which makes me sad), Adepta Sororitas, Drukhari, and Kroot. 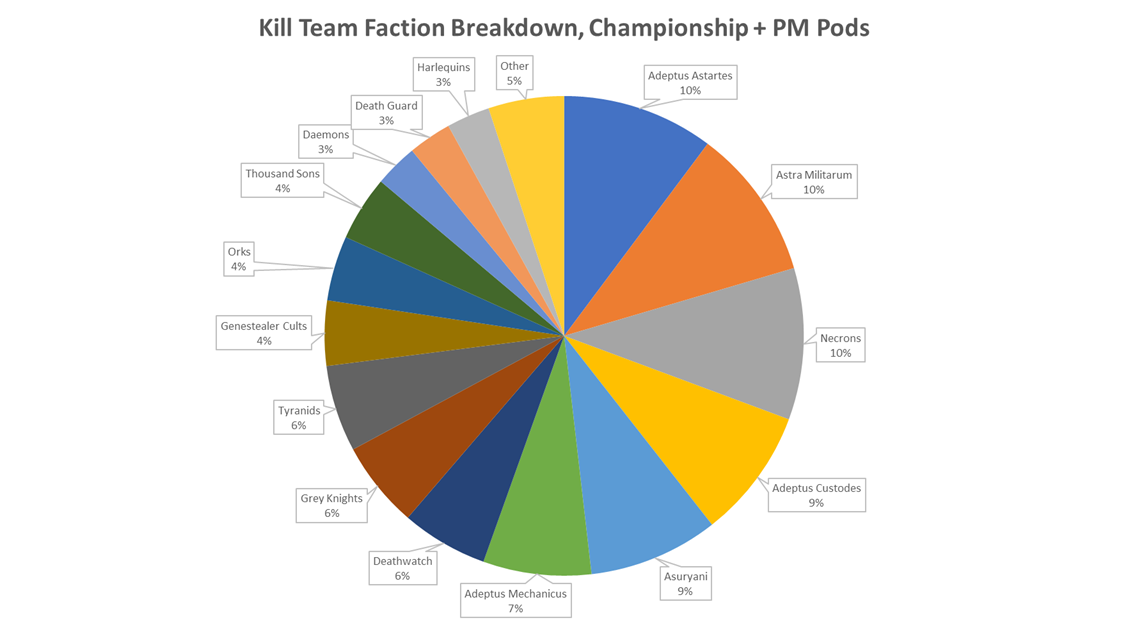 Of those factions with more than one player representing (sorry Chaos Space Marines, Drukhari, Adepta Sororitas, and Kroot), Asuryani pulled the highest win rates, winning 72% of their games with 6 players repping the faction. This included Michael T Holy’s winning list (more on that in our lists section below), and Janis Gilham’s 6th-pace list.

Points-wise, teams averaged 18.6 points in their winning games and 10.3 points in their losses, and the lowest score recorded in a win was 11 points. So if you’re playing Kill Team in the LVO format, it may behoove you to think about how you can score 11+ points in a given game with your team.

In our pre-LVO primer on the format, we introduced the new tournament rules and talked about how to play them and what impact they might have on different kill teams. Now with the benefit of hindsight, we can revisit those thoughts and offer some additional ones. If you missed our primer last week, you can find it here.

Shane: One thing I wanted to highlight about the event was the terrain. There was some concerns (although I didn’t hear any from players at the event) regarding the way the crates worked by being impassable being a detriment to melee teams due to needing to go around.

Ironically enough, the layout ended up benefiting both melee and shooty teams. With the layout and density of the terrain, melee teams/models were able to move up the board fairly easily. (When I played my match up vs Asuryani, my opponent was able to hop their banshee exarch around from terrain to terrain, to get into my lines.) The layout also left a few small firing lanes, this combined with having objectives that were hidden and visible, enable shooting teams to leverage their strengths as well. Overall I found the tables balanced and great to play a competitive game on. There wasn’t a large variety of terrain, but that was not the original plan. The KT TOs had a plan for terrain based on what was available, and that plan didn’t work out. So they were forced to scramble to get all the tables furnished, and it panned out.

I want to give Elliot, Alex, and Sheldon (Sheldon didn’t TO this event, but helped with terrain and streaming) a shout out for all their hard work in running this event, and for their dedication in getting terrain together at the last moment despite the challenges set before them.

In this final section, we’re taking a close look at the Kill Teams that performed well and giving some thoughts on their choices and play.

This is the list that took it all, and it’s probably as much the player as the list. Michael took the Wraiths as a way to reduce the number of vulnerable targets in his list and add a bit of extra power, but every part of the list is strong. Asuryani are fast, hard hitting and surprisingly resilient, and Michael used every bit of that to take the first place spot. We’ve already written about them at length in our Kill Team Tactics article, which covers the relevant units.

This is very similar to the sample list in our Kill Team Tactics article on AdMech, which makes sense because the AdMech plan doesn’t change between the previous format and this one. They never had the bodies to spam and they were never that tough, so they always had to focus on offense and whittle down the number of scoring bodies the enemy had. Here their models are vulnerable to being killed but they can potentially score kill more even against elite armies like Grey Knights and Custodes due to their withering firepower.

Glass Half Dead’s YouTube channel is one of the major resources for competitive Kill Team, and as you can see from his third place finish he knows a little bit of what he’s talking about. He discusses the list here (https://youtu.be/rXe90UoB218?t=1828), but it’s essentially two lists. The Mephrit half sits back with Necron Warriors in Mephrit with an additional point of AP while the two Lychguard create a threat that has to be dealt with while the Novokh list is a full rushdown. Both lists benefitted from the natural resilience of Necrons. If you want to know more I’m sure he’ll be releasing some videos later about his LVO experience.

We already ran a showcase article on Jacob’s Grey Knights and his experiences at the event. You can check it out here.

This was a Drukhari list focused on fast, durable, short ranged threats. Prophets of Flesh makes the Wracks and Grotesque absurdly durable for the points (T4/4++ for the wracks, and the Grotesque had 4 T5/4++ wounds), the Incubi have a 3+ save with improved power weapons and the Mandrakes are at -1 to hit (very powerful in Kill Team when you can stack the penalties on) and they have an invulnerable save. With this much speed and durability it can either stall out the enemy and win on positionals or against spammier factions it can just rush in and kill.

(All tzaangors have Tzaangor Blades)

This list behaves similarly to the Grey Knights with the ability to act in the psychic phase and either kill off attackers in melee or snipe out models before the shooting phase starts. You give up all of your models being psykers, but in return you get efficient armored shooters and cheap, efficient melee.

Novembermike: This was my list. I took it to an 11th place finish, losing to Jacob’s Grey Knights. If I had to do it again I probably would have taken fewer regular gunners and more Scion Plasma, but pulling in Gotfret, Vorne and a Bullgryn or Ogryn gave me a solid melee threat that the enemy had to deal with and I could back that up with good shooters. Many players weren’t prepared to fight aggressive guard in melee and lost when they were deploying or picking secondaries.

There were also a few players winning games with Custodes. I won’t put a list here because Custodes just bring everything in a 20 man roster, but the teams we mostly saw were three models with either two sword/shield Custodes and a spear or the opposite. The biggest issue with beating them was that they tend to deny the Kill/Kill More primary objectives. They’re hands-down the most durable models in the game and if they get into melee they will reliably kill models. The only issue they ran into was that with only 3 models they needed to get the most out of every activation, and if they were forced to shoot they weren’t that impressive. Good players with faster armies could play the positioning game to win on points.

That just about covers our review of Kill Team at this year’s LVO. We’ll be back next week talking about Commander specialisms and in the meantime, if you have any questions or feedback, feel free to drop us a note in the comments below or shoot us an email at contact@goonhammer.com.