This week’s Hammer of Math is a quick look at how nasty the Adeptus Custodes Blade Champion from Shadow Throne can be.

As the gene-bred protectors of the God-Emperor, the Adeptus Custodes are intended to be a collection of some of the most powerful and terrifying beings in the Imperium. If the reveals from Shadow Throne are any indication then the Custodes should definitely maintain this standard as they enter 9th Edition. A good example of this can be seen in the Blade Custodian, a new model clearly intended to serve as a 3m tall post-human blender. Stats wise this comes in the form of 6 WS 2+ attacks at S5 made from one of three Vaultswords.

In practice this means that (against the right targets) the player needs to decide against 6 AP-4 D2 attacks which will wound on a hit roll of 4+, 12 S5 AP-1 D1 attacks, or 6 S6 AP-4 D3 attacks which re-rolls wound rolls. We can look at the spectrum of results by charting the expected wounds against various Toughness and Save characteristics. Note that these numbers should be considered baselines, as they don’t include any of the possible Relics, Warlord Traits, Stratagems, Martial Ka’tahs, or Fighting Styles that will be coming out in the new Codex.

The results provide some actionable information:

Since the goal of the Blade Champion is clearly to find the biggest, nastiest, most threatening hero on the other side and cast them down, what kind of damage can we expect this Custodes to do against various marquee threats like Bel’akor, Mortarion, or a Knight? Let’s take a look at some options: 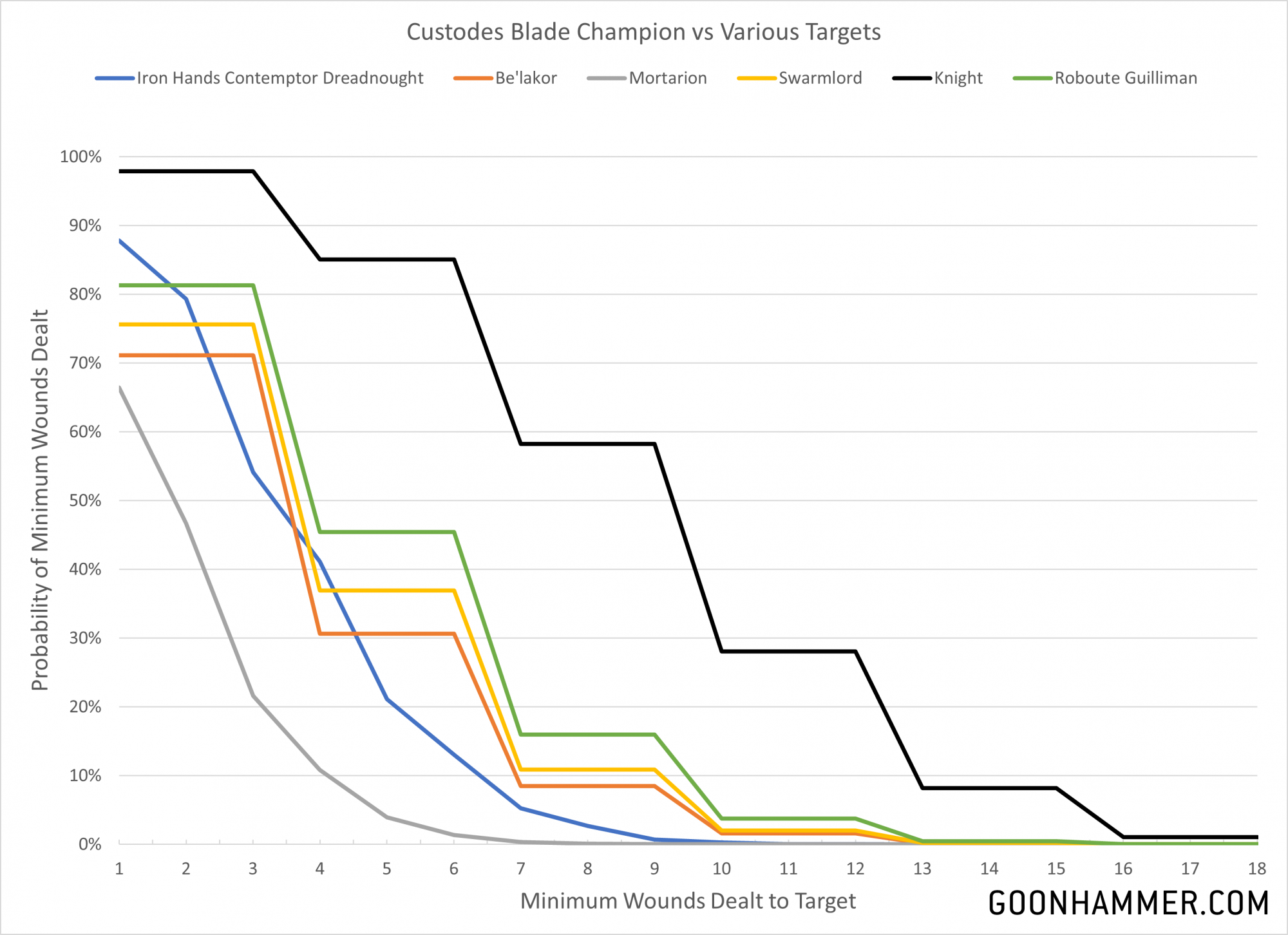 While the Blade Champion is certainly nasty against quite a few targets, he’s not likely to do much damage against the really big nasties out there. Whether it be from damage reduction or high invulnerable saves, these hard targets will give the baseline Blade Champion trouble, though in a a way 110 points does seem like a pretty fair bargain to have a 15% chance to kill all 380 points of Roboute before the Primarch can even act. It’s also important to remember that these values do not include any of the bonuses or Stratagems that Custodes are guaranteed to get in the new book.