Codex: Drukhari continues to take the competitive world by storm, and with GW on a bit of a COVID-induced temporary hiatus it doesn’t seem like there’s going to be many new products to counter them. With that in mind this week’s article of Hammer of Math takes a deep dive at what it takes to efficiently kill the 85 point Raider.

At first glance the Raider doesn’t appear to be a particularly tough target. A T6 10W VEHICLE with a 4+/5++ save thanks to the Night Shield ability, it embodies the Drukhari ethos of being a particularly spiky glass cannon. Its primary job is to carry things around and make life hell for the opponent, but it also can serve as a very potent threat in its own right. It’s very likely that once per turn a Raider will be protected by Lightning Fast Reactions for 1 CP to induce a -1 penalty to the hit roll (though it’s worth briefly noting that Covens ones can’t do this, for anyone out there using Dark Technomancers ones). These things are nasty, cheap, and the invulnerable save means any attack has a chance to be ignored.

We here at Goonhammer took a look at a variety of options to see what options have a good chance of killing a Raider assuming no penalties and a -1 to hit. Because the Raider is so cheap at 85 points it’s important to not only consider how killy a particular threat is, but also how cost efficient those units are. Because our goal is to kill a single target, we can look at the probability of achieving a kill over a given number of turns. If we set a confidence interval, such as 95%, we can then determine how many points are required to get a sure kill on a target.

Clocking in at 135 points when equipped with a Whirlwind vengeance launcher, the classic Astartes artillery piece can unleash 2D3 S7, AP -1, D2 attacks that can target units that are not visible to the bearer. We’ll look at several possible scenarios here; a baseline attack, an attack at -1 to hit, an attack that re-rolls 1s to hit or wound (the net effect is the same), and Imperial Fists getting +1D in the Devastator Doctrine. Unfortunately the numbers do not look good; depending on the circumstances between 9 and 14 rounds are required for a Whirlwind to kill a Raider. Using the most optimistic outcome that’s around 1,215 points (or, 3 Whirlwinds firing for 3 turns). 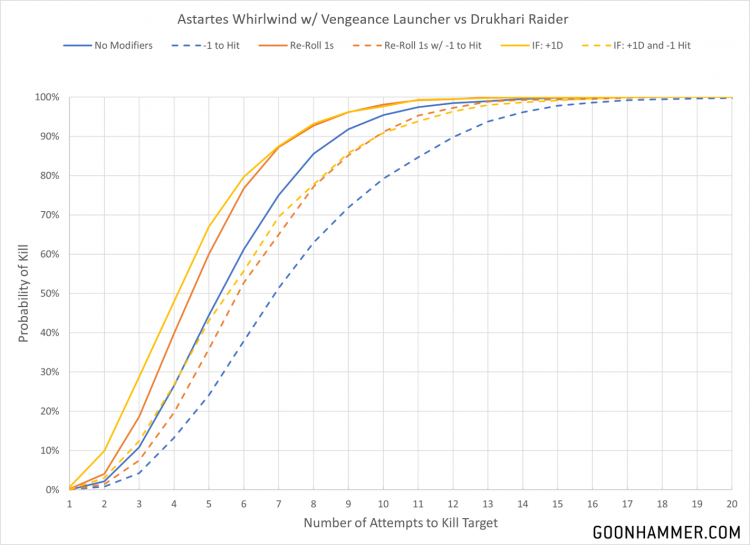 Astartes also have the option to deliver a Turn 1 attack using a Drop Pod loaded with multi-melta equipped Devastators. Properly configured with an armorium cherub this results in a total of 10 S8, AP -4, D1D6 attacks which can get an additional 2 damage when within 12″. 4 of those attacks will be at BS 2+ thanks to the Signum ability of the Sergeant. For the sake of this analysis we’ll assume that the Drukhari player has screened off their Raiders so that the +2 damage bonus is not applied, but we will look at what happens if the Imperial Fists can attack. 5 Devastators with 4 multi-meltas and an armorium cherub sets you back 175 points. Although still vastly better than the Whirlwind, you still need 525 points worth of Devastators to achieve a 95% probability of kill. 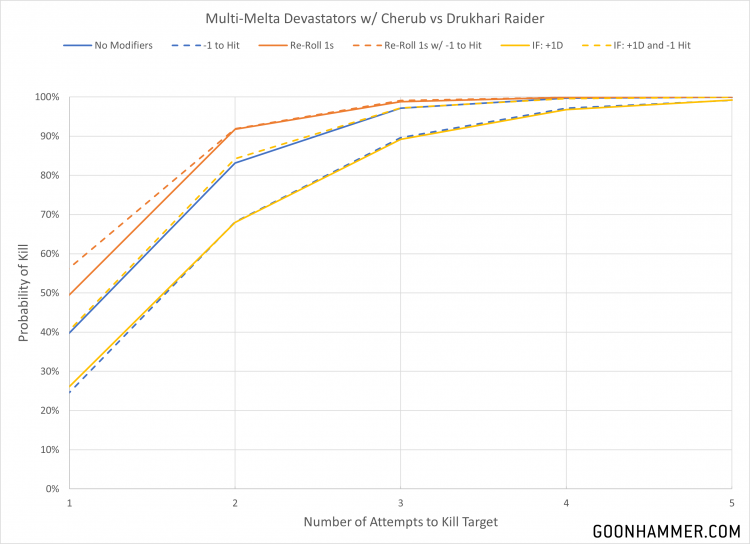 We did a deep dive into the resin awesomeness that is the Contemptor, so it seemed appropriate to look at what would happen when the Contemptor was armed with two sets of volkite culverins and a cyclone missile launcher. At 175 points you can expect to deal a lot of damage, especially in the first turn when the Devastator Doctrine ensures that the Raider will be saving on a 5+. Unlike the other scenarios the presence of a mortal wound ability on the Wound roll means that re-roll 1s to wound is more effective than re-rolling 1s to hit, which is fantastic given that the Contemptor can spend 1 CP to use Wisdom of the Ancients to get that effect. The results below speak for themselves; Relic Contemptors are just as good at killing Raiders as they are at killing anything else. Needing between 2 and 3 rounds to achieve a 95% success rate means you’re still talking about 350 to 525 points depending on the circumstances. 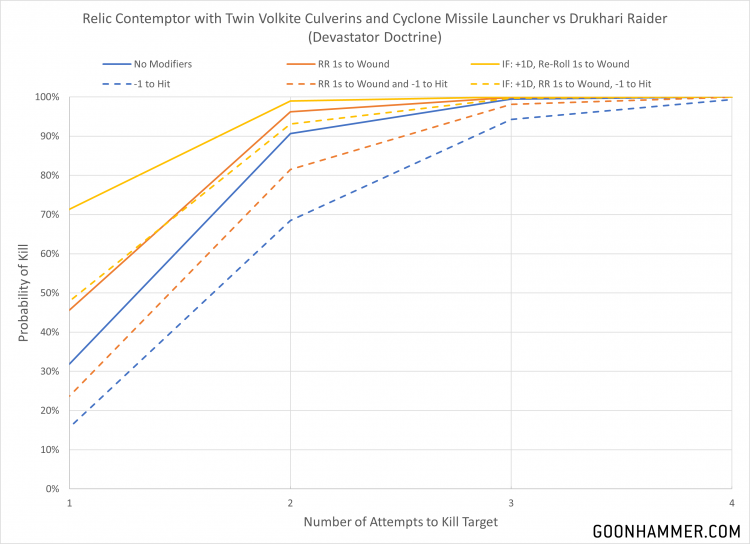 One unit that’s been consistently brought up are Primaris Suppressors with autocannons. 100 points will get you 9 S7, AP -1, D2 shots at BS 3+ which seems ideal particularly given the cost. However you’re still looking at between 4 and 5 attempts to achieve a 95% success rate, costing between 400 and 500 points. Suppressors particularly suffer from being models armed with heavy weapons that want to move about, although Iron Hands naturally can get around this issue. 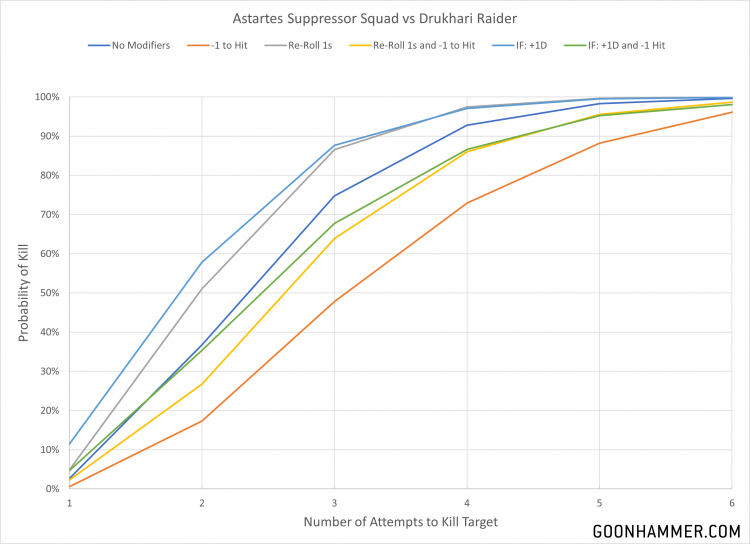 145 points will get you a long-range, blind-firing, death raining artillery piece raining storm eagle rockets upon your enemy. With 2d6 S10, AP -2, d3 damage shots at BS 4+ you’re looking at a combination of both quantity and quality. Players can spend 1CP on Tank Ace to give the Full Payload ability which changes the damage to a flat 3, or use either the custom Gunnery Experts or standard Catachan regiment to reroll up to one of the dice when determining the number of shots. Unfortunately the combination of highly variable output and low BS (particularly when facing a -1 modifier to the hit roll) makes the Manticore fairly ineffective against the fast moving Raider. At best you’re looking at 1,015 points to achieve a 95% confidence. (Corrode: to some extent you can counter-act this by getting a direct line of sight so you can spend 1CP for Direct Onslaught, but that does rather expose your fragile Manticores to all the darklight coming back the other way). 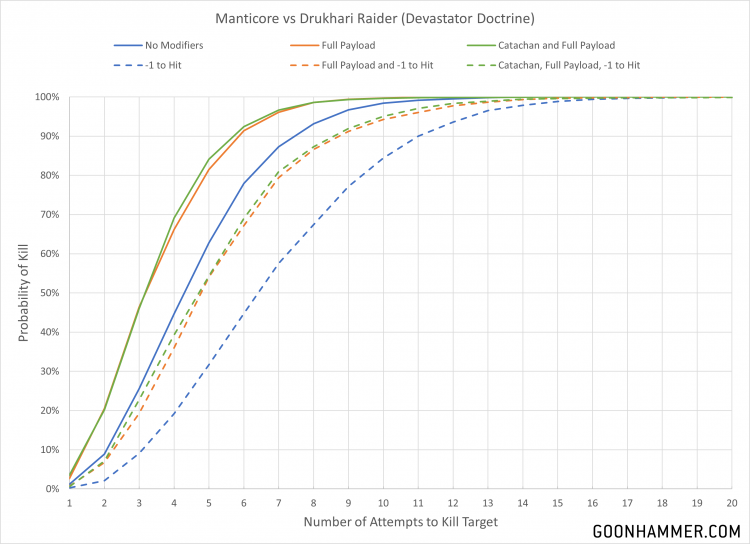 Although the new book is around the corner, the Adeptus Mechanicus already have a very solid option in the form of the Skorpius Disintegrator. At 150 points it can move 12″ and still get off a considerable number of shots thanks to the combination of belleros energy cannon, three cognis heavy stubbers, and a disruptor missile launcher. On top of that the Skitarii craft has access to two different Stratagems to provide a bonus to the hit roll; +1 to hit with Stereoscopic Triangulation which also ignores cover, and +2 to hit with Protector Doctrina Imperative since the vehicle is armed with a broad spectrum data tether. Both Stratagems are 1CP. For the purpose of this analysis we’re going to look at the effect of a full attack as well as an indirect shot with only the energy cannon. Unfortunately while the Skorpius can put out a lot of shots, in the best of circumstances analyzed it still needs 6 attempts to achieve a 95% confidence for a total of 900 points. 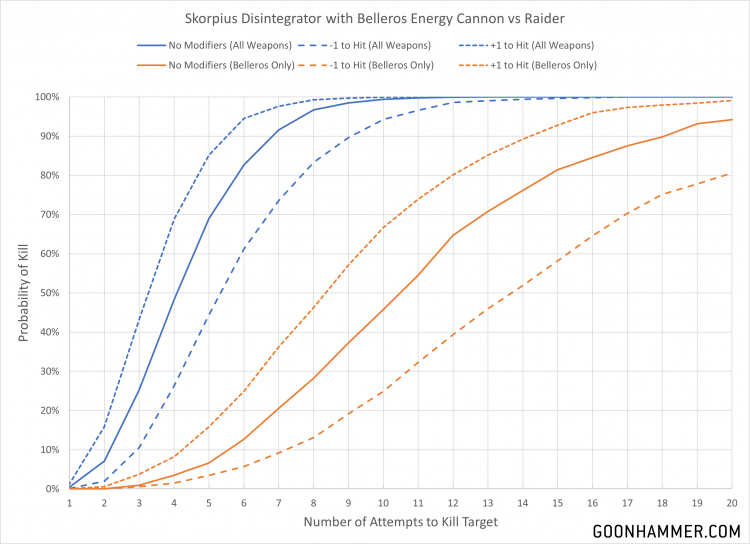 On paper the Helverin seems like the perfect counter to Drukhari Raiders. A total of 4d3 S7 shots that deal 3 damage each and force the target to their 5++ while hitting with a 3+ is a great value for 155 points, and of course you shouldn’t forget the heavy stubber. Using Skyreaper Protocols for 1CP allows the attack to re-roll hits since Raiders have the FLY keyword. The results below are a perfect example of the influence of variability in the number of shots. While the Helverin averages 8 shots per turn, it can be as few as 4 with a bad roll. Or 12 shots against a target with only 1 wound left. That’s one of the reasons why you need between 465 and 775 points to get that 95% probability. 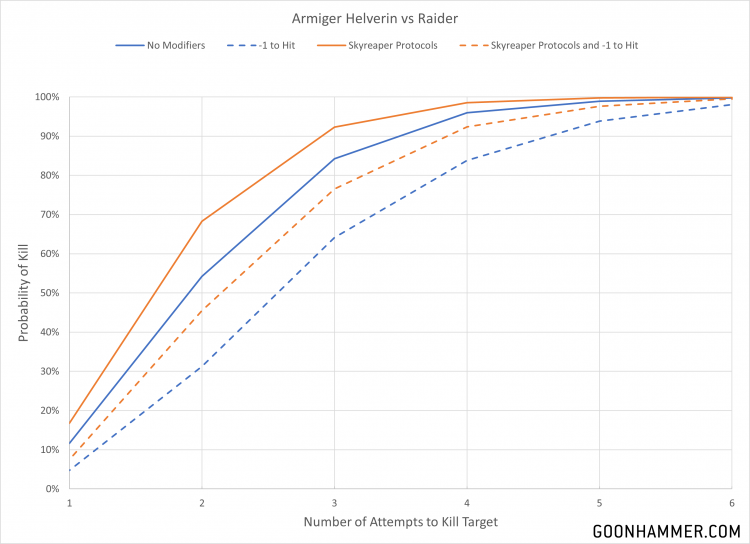 There are a lot of other options we could have explored, including the Exorcist and Retributors from the Sisters of Battle or plasma Inceptors, but the bottom line is that for 85 points the Drukhari Raider is impressively hard to kill. The combination of T6, invulnerable save, and 10W puts it in a situation where large quantities of low damage fire may not do enough while low quantities of high damage may be ignored by the invulnerable save. In contrast the Venom is significantly weaker; while costing almost the same when weapons are included it has four fewer wounds, a lower Toughness characteristic, and significantly reduced offensive capabilities. This makes the Raider the obvious choice. Next week we’ll see what options are available to the forces of Chaos and xenos armies.